Artists talk: The case for the Delta des Refuses

“It’s fun – a light-hearted rebuttal,” says Rachel Trusty from the center of the Thea Foundation’s gallery space in the heart of Argenta. She’s speaking, of course, of the Delta des Refuses.

Art educator and organizer, Trusty has become a leader in the local scene, thanks in part to being rejected from the Arkansas Art Center’s premier juried show, The Arkansas Delta Exhibition.

“I was sitting at my desk at work and I thought we need to have a Delta des Refuses … and then I thought, actually, that might be an interesting idea.”

Fashioned after the original Salon des Refuses put on in Paris in the 1860s, the Delta des Refuses is in its second year. Greats like Paul Cézanne, Camille Pissarro, Gustave Courbet, and Édouard Manet spearheaded the original show to rile against the Salon system, which was then the voice in European art.

To be eligible for the Delta des Refuses, artists have to have been rejected from the Delta Exhibition of the same year.

Trusty explains, “It has to be the same year’s work up at the same time, because I want you to go to both shows – and you the viewer make your own opinion.”

The response to last year’s show at the Argenta Branch of the William F. Laman Library was overwhelmingly positive, so much so that Trusty knew she would need a larger space.

And while the quality of work was great, she also knew she wanted to continue to introduce more artists to the show and it all it stands for. “People are cautious,” she says, but landing at the Thea Foundation has helped. “I knew having this space – because it’s so nice and well-known – it’s also going to help legitimize the exhibition.”

In fact, the foundation was all too happy to help. Stacey Bowers, Communications Coordinator for the organization says, “Rachel approached us to host the show, and when we learned about how inclusive it is and just how many artists want to be exhibited in it, we couldn’t say no. Sure, the majority of our programming at Thea is centered around the arts in education because that’s the heart of our mission, but the impact the arts have on a person doesn’t end at graduation, and part of our mission is to be a bolster for the arts in our community at all levels – … and we’ll do anything to get people talking about the arts.”

Over 70 artists are participating in the show, which means you get a chance to view almost every medium imaginable including textile work and installations. The opening reception is this Friday, June 17, from 5 – 8 p.m. and coincides with the Argenta Art Walk. Before you head to the reception, take a chance to meet some of the artists and read their thoughts on the show as well as their work. 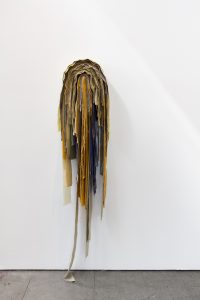 San Francisco native Sofia V. Gonzalez is an artist and art educator that has landed in Little Rock. Her work is titled, self portrait, a textile piece she began in 2014 while still in California. The silks are hand dyed from the plants and vegetables that are nearby her home and opens a conversation about a sense of place. She has added to the piece since coming to Little Rock.
She says, “It’s exciting to see the community conversation Rachel Trusty has created with the Delta des Refuses exhibit. Not only does the Delta des Refuses spur interest in the Annual Delta Exhibition at the Arkansas Arts Center, but it also creates a buzz about what did not get accepted, those artworks which usually slide back into the artist’s studio or desktop folder of images until the next submission. I think it’s important for this back and forth between artists, juror, and the community to be a more public conversation. It’s unusual to receive feedback if your work is rejected from a show, and the Delta des Refuses is a refreshing opportunity for artists to have that chance.”

The sitter (a self-portrait)

Local artist Lisa Krannichfeld is known for her iconic portrait work, and was a recipient of one one of the Delta Awards in last year’s exhibition at the Art Center. She’s glad to see Little Rock opening up to a newer show in which artists have that further chance to share work. She says, “I feel like the whole point of art exhibitions is to stir up an interest and dialogue about art and the artists that create the works. The more art exhibitions in this community the better, in my opinion. There’s nothing like an opportunity to exhibit work and get feedback to inspire an artist to work on their craft more, thus making them better artists.” 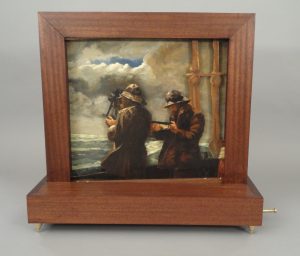 Conway-based artist James Volkert spent numerous years working in museums, including the Smithsonian Institute. Volkert submitted a really unique, kinetic piece to the Delta this year – Uncertain sun shot: after homer – and is ecstatic to be a part of the Refuses show. He says, “The Delta has grown into a major regional art competition and should be congratulated for this. At the same time, this means hundreds of extraordinary works will not be included because of the narrow selection band, juror’s taste, or space limitations.
Much like its 19th Century Parisian parent, the Salon de Refuses, the Delta de Refuses, brings these works forward. Also, like it’s parent, it can be edgier, defy categories, and lay out a broader sampling of the current state of the art.
I like that, especially since my own work is not easily categorized, and am thrilled to participate.” 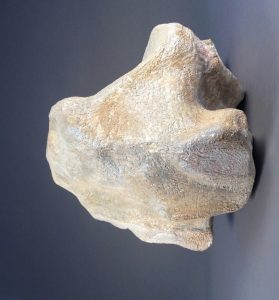 Clay, Grog, Wax…Portrait of a Rock

Studio artist Barbara Satterfield’s piece, Clay, Grog, Wax…Portrait of a Rock was originally inspired by her found object series. She says, “While I’ll always enter the Delta, I hope the Refuses show helps us recognize and build on the foundations that have been laid in Little Rock and North Little Rock. Arkansas visual artists are already an integral part of our state’s creative economy and are ready to respond to additional competitive opportunities, as well as excellent group shows.” 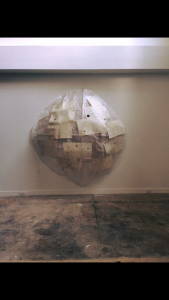 Local artist and educator Jessica Bell has an installation – Lunar Sanctuary – in the show. She says, “Rachel Trusty is a driving force in the Little Rock/North Little Rock curatorial community. She is a practicing artist, art educator, and comprehends all aspects of contemporary art with a wide lens. When she launched the Delta des Refuses show last year, it opened up opportunity for artists to feel connected. However, this connection is not about wanting to be seen in the art community; rather, it is about expressing the notion that art has a voice. Many of the pieces in this year’s show have a sincere voice – whether it be about experimenting with technique, what constitutes as art in general, or asking the viewer to interact with the artwork and think critically about it.” 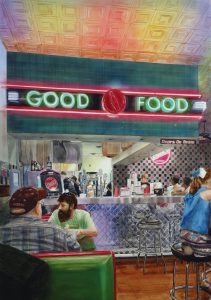 Local painter Byron Taylor painted his work Good Food, Legacy Grease based on an iPhone photo he snapped in Memphis. He says, “I think the Refusés show is a great idea. Far from a “sour grapes” show, it follows a long tradition of shows starting with the Paris Salons in the 1860s. Then, as now, many, many more entries were received for the Salon than could show, so the Refusés began. For Little Rock, this is a wonderful idea because there is absolutely no predicting what or who will be accepted into the Delta. Last year, I had a piece that took second place in a field of 2700 in a national portrait competition. It was not accepted into the Delta, but a different painting was. This year, I had taken inspiration from the Delta piece and done a newer, better, larger version, and nothing I entered was accepted. I have friends who won Delta awards in the past two years, and neither of them were accepted into the Delta.”

All photographs of artist artwork provided by the Thea Foundation and the Delta des Refuses. Head here to see all of this year’s artwork, and then be sure to come to the opening reception this Friday to talk with the artists. While the event is free and open to the public, donations are encouraged to help Thea cover the cost of hosting the show.