[dropcap]However,[/dropcap] 15 years before the Razorbacks were named the top team in the country, there was another national championship team from Arkansas: the Trojans from Little Rock Junior College. The two-year college, popularly known as Jaycee, would one day grow into the four-year Little Rock University, which is now the University of Arkansas at Little Rock (UALR). [pullquote]Above photo: 1949 Junior Rose Bowl Championship team with Coach Jimmy Karam.[/pullquote]

On Dec. 9, 1949, the Trojans played the Dons of Santa Ana Junior College in the fourth annual Junior Rose Bowl at Pasadena, California. It was the junior college version of a national championship. Organized by the Pasadena Junior Chamber of Commerce, beginning in 1946 the bowl pitted the champion of the California junior college system against a team deemed the best from the eastern United States. The Trojans beat the Dons, 25-19, breaking the California schools’ three-year hold on the championship.

OK, so the 1949 Trojans represented a two-year college, not a four-year university, but in their day the scrappy young men from Jaycee attracted considerable attention.

“Their story needs to be told,” said Bob Denman, UALR’s vice chancellor for advancement. “This is a lost piece of Arkansas sports history.” 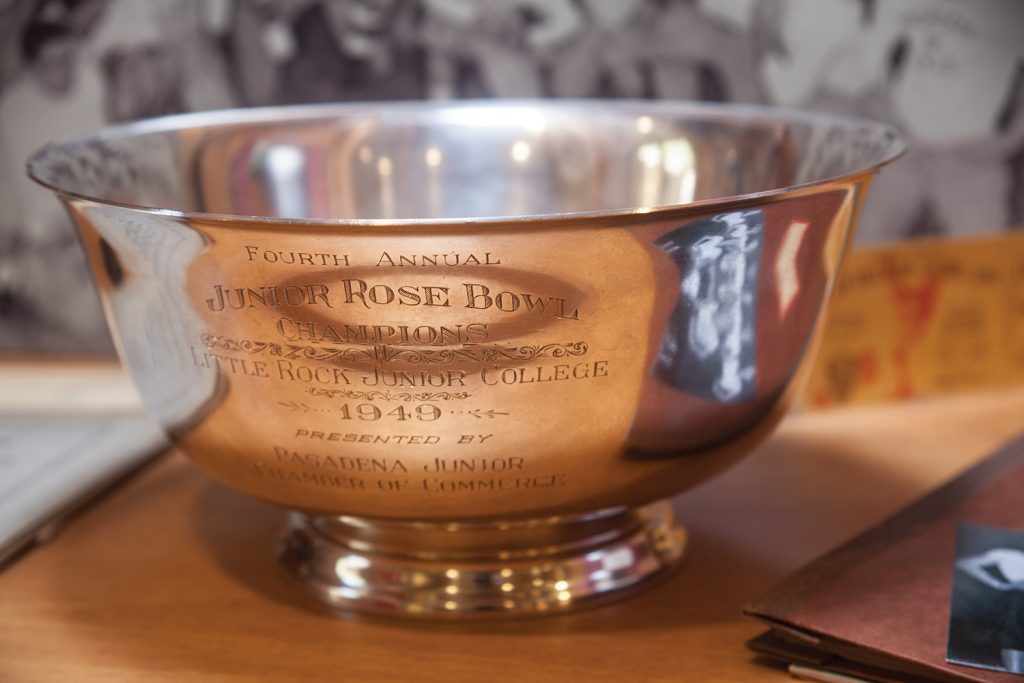 What follows comes chiefly from an interview with Denman, from the book The People’s College: Little Rock Junior College and Little Rock University, 1927-1969, by James E. Lester Jr., and from newspaper clippings about LRJC’s championship season.

John Larson, president of LRJC, in 1947 hired James T. “Jimmy” Karam to resurrect the college’s football program, which had been dormant since the 1930s. Karam, a Lake Village, Ark., native, played football at Auburn University in Alabama and coached some while serving in the Navy during World War II.

The Trojans had winning seasons the first two years, but the third season read like a Hollywood script, Denman said, describing the players as not only gridiron heroes, but heroes off the field as well.

In September 1949, he said, players dashed from a team meeting to aid three children who were trapped in a tree by the flash-flooding Coleman Creek in the center of campus. The players formed a human chain to rescue the children, then wrapped them in team blankets until police and firefighters got there.

About a month later, the Trojans ended the 16-game winning streak of the University of Arkansas freshman team, known as the Shoats, beating them 34-0 at War Memorial Stadium. The Trojans marched on to an undefeated season, including a 70-12 trouncing of Arkansas College [now Lyon College in Batesville] at homecoming. 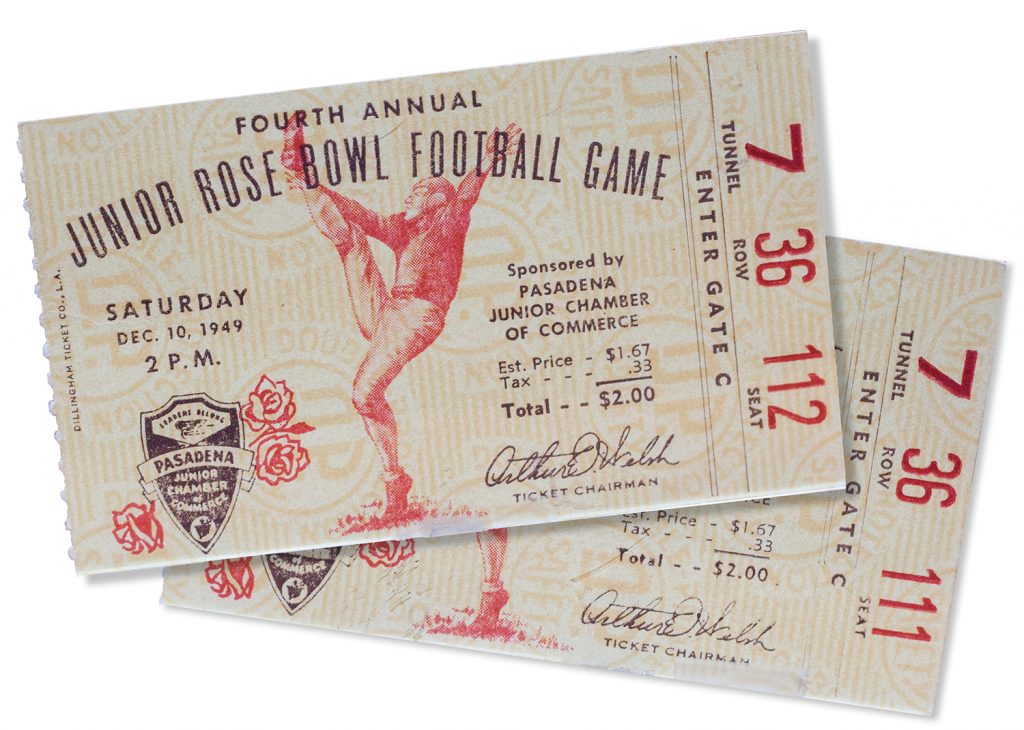 Then came the invitation to play in the Junior Rose Bowl.

In describing the activities associated with playing in the bowl game, Denman said the Trojans traveled to Pasadena by train, accompanied by Miss Arkansas Barbara Brothers. The players danced at the Brown Derby, and the cheerleaders especially enjoyed dancing with John Wayne. More than 50,000 fans turned out for the game, and at halftime actor Dick Powell, an Arkansas native, visited the Trojans’ locker room, giving a pep talk.

The shiny championship trophy can be found in a display case in UALR’s Bailey Alumni Center, not far from Denman’s office. 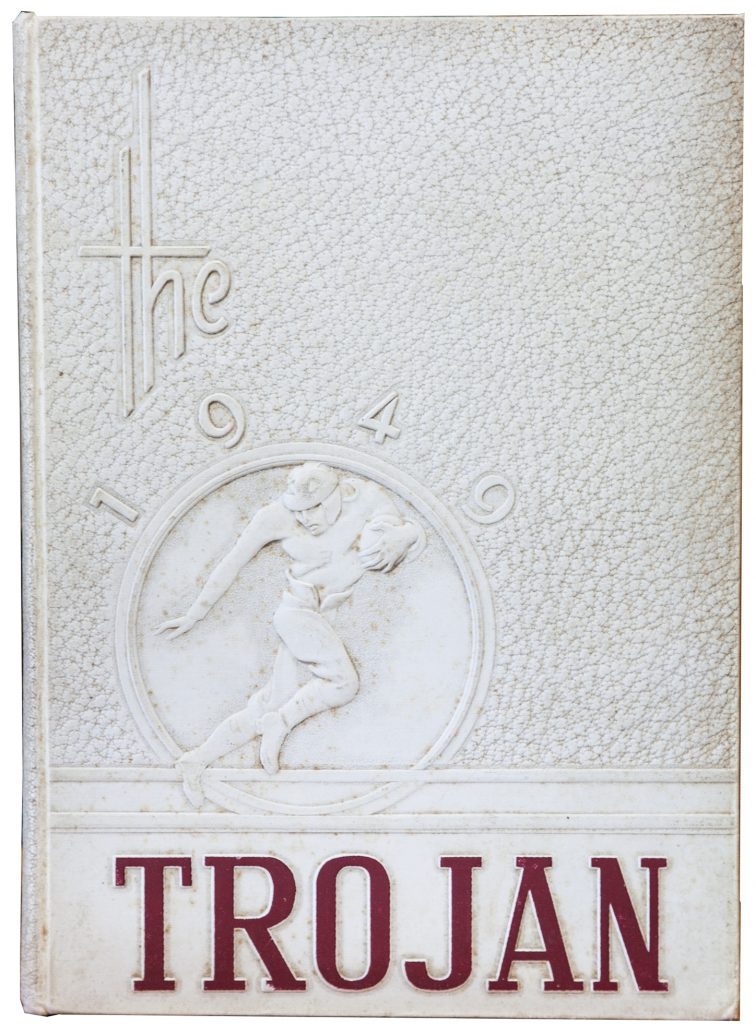 Denman asked this reporter if he wanted to see something and moved over to his computer. He pulled up YouTube and typed in “LRJC Rose Bowl.” We then watched parts of a highlight film of the game, including, just past the 18-minute mark, Trojan Benny Scott’s spectacular punt return for a touchdown. Scott fielded the ball at about his own 30-yard line, began running forward, then retreated back to near the 15 before again flying upfield, dodging numerous would-be tacklers in a manner described as “jitterbugging.”

That description was contained in a newspaper account, one of many Denman showed the reporter, in a scrapbook brimming with newspaper clippings about the team. One clipping has a photo capturing the game-winning touchdown reception by Trojans end Joe Shinn during the final three minutes of play.

For some unknown reason, Denman said, the football players never received their championship rings after the bowl game. So, in 2006, UALR officials brought the surviving team members to the Stephens Community Center to be honored during the halftime of a basketball game. He estimates there were 15 to 18 people, either players or their representatives — and 57 years after winning that national championship they were awarded championship rings.

Denman said he was standing nearby as the players exited the basketball court. One of them was Shinn, and he had tears in his eyes. “He told me, ‘We thought we had been forgotten.’”

Denman promised himself that night he would tell the team’s story every time he has the chance.

So, what happened to Jaycee’s football program?

A little back story:

Larson, LRJC’s president, was largely behind the program’s rebirth. Having played football and other sports in college, he “believed that an active sports program not only helped promote school spirit, but also aided in publicizing the work of the college,” Lester wrote in “The People’s College.”

And though it did improve school spirit and bring welcome attention, LRJC football was a shoestring operation from the start and stayed that way. Lester wrote that Karam’s selection as coach “proved to be an excellent one. The college had no athletic dormitory, had a minuscule football budget, and offered no scholarships to players.”

Karam was resourceful, however. Lester cites an interview Karam gave for a UALR oral history project in 1977.

“I’d go around town,” Karam said, “and Mr. Jim Penick at the Worthen Bank and Mr. [J.N.] Heiskell at the Arkansas Gazette and very prominent people in town would give me money to have the boys eat at a training table and help them some.”

Even winning the national championship did not help much financially. Lester wrote, “LRJC realized a paltry $1,364 above expenses for participating in the game, and received that money only after filing a lawsuit against bowl officials in California.”

Karam’s reference to helping the players financially indicated another issue.

Lester wrote, “How much ‘help’ the football players received remained a mystery even to the school’s top administrators. For three years Karam ran the football program on his own, and few people at LRJC questioned his methods because his teams won most of their games.”

But, in the fall of 1949, as the Trojans were on their way to a perfect season, Pres. Larson wrote to an official with the North Central Association, and accrediting organization, with an inquiry about aid to athletes. The reply he received was that athletes should not be favored over other students in terms of scholarships, loans and other aid.

“Members of the administration and the school board, wanting to uphold the academic integrity of the institution, refused Karam’s demand that he maintain total control of the football program, and the coach and the college severed relations on an amiable basis. … The Trojans’ former leader went on to become a successful Little Rock merchant, while Jaycee athletics stagnated over the ensuing years until the institution dropped varsity football and basketball in the mid-1950s.”