Matters of the Spine

[dropcap]T[/dropcap]hrough innovative, minimally invasive spine surgery Dr. Scott Schlesinger helps restore his patients’ quality of life. The spine is the body’s pathway of the brain to its limbs, according to Schlesinger of Legacy Spine & Neurological in Little Rock. “It’s like the body’s super highway. When discs become deranged, the pathway is disturbed.” And that’s where Schlesinger comes in.

Uncovering the underlying cause of back pain or complications in the extremities is sort of like performing detective work of the body. Schlesinger also likened his profession to that of an electrician, as he studies and rules out what components of the nervous system are at play. He is so intrigued by this work that he developed a minimally invasive procedure for one purpose ¬– giving back people’s quality of life. 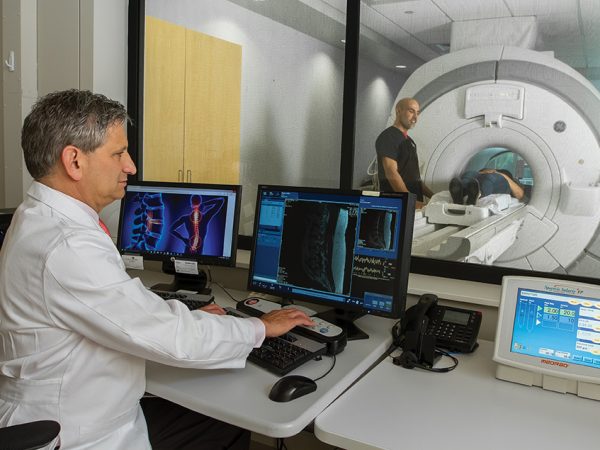 Schlesinger’s development of the Midline Image Guided Fusion procedure is less invasive than traditional spine fusion, reducing the invasiveness and time of surgery, as well as recovery. Photo ©Legacy Spine and Neurological Specialist

Schlesinger created the Midline Image Guided Fusion (MIG LIF) procedure to provide a much less invasive surgical method to his patients who are in need of a lumbar spine fusion. This type of surgery is performed when a patient is facing debilitating back and sciatic pain. Schlesinger’s technique allows the entire fusion of surgery to be performed through a single “keyhole” incision of only 15-20 mm, less than three quarters of an inch. Under image guidance, with computer assisted navigation and use of the operating microscope, this small incision is used to perform a complete decompression, fusion and instrumentation procedure.

For some perspective, the incision size necessary for a traditional spinal fusion can exceed 75 mm, almost three inches, Schlesinger noted. The key to his procedure is that it results in less surgery time and blood loss, which lowers the risk for post-op infection and quickens recovery time.

In a clinical study at Legacy, 40 patients suffering from degenerative disc disease who tested positive for radicular pain and segmental instability were treated using the MIG LIF procedure. All patients were successfully discharged the same day, Schlesinger said. Hospital stays associated with traditional spinal fusions are between three to five days, he said. Also, no blood transfusions were required for patients operated on by Schlesinger versus patients treated with traditional methods.

Schlesinger developed an interest in the field of medicine at an early age. He was born at St. Vincent Hospital in Little Rock and grew up in Hot Springs. When his grandfather was ill, he remembers frequent visits to St. Vincent’s, he recalled, and being enamored by the doctors and nurses as they took care of his grandfather. “I remember saying, ‘This is what I want to do.’”

“The spine is the body’s pathway of the brain to its limbs. It’s like the body’s super highway.” -Dr. Schlesinger

While in a Boy Scout explorer program, he was able to watch surgeries be performed at the local hospital. “I knew then I would wanted to do something in surgery,” he said.

Schlesinger earned his medical degree from the University of Arkansas for Medical Sciences; completed his neurosurgery residency at University of Texas Health Sciences Center in Dallas; underwent general surgery internship at UTHealth; and completed his fellowship at Centre Hospitalier Universitaire Vaudois in Lausanne, Switzerland.

He’s been operating in Arkansas for 24 years. “The most fascinating part of the body is its neuro-system,” Schelsinger said. “It’s like being a detective as you find out what’s wrong on the vast computer called the brain.”

“It’s definitely a field you can’t do unless you “love it,”he noted. His wife, Dr. Kelli Schlesinger, also works for Legacy Neurology, offering patients the full spectrum of outpatient neurology services and neurological consultations. “It’s such a big part of our lives, we find it so enjoyable to figure out the cause of pain in patients,” he said. 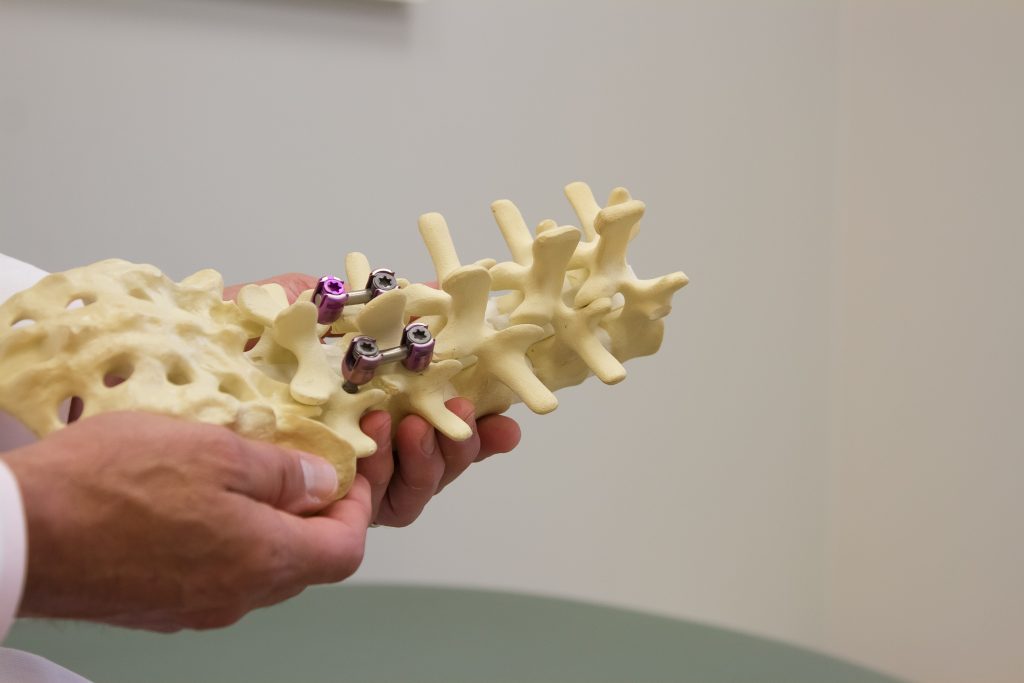 A close look at rods and screws used to stabilize the spine. Schlesinger’s innovative procedure reduces the necessary incision from less than three inches to less than an inch. Photo ©Legacy Spine and Neurological Specialist

The team at Legacy offers a unique, comprehensive team approach for patients, Schlesinger added. “Technology has advanced as such where you don’t necessarily have to see neurologists before a neurosurgeon. We work together as a team. It’s a great situation for patients to only have to go to one place for their needs.”

Patients come from across Arkansas and surrounding states, such as northern Louisiana and eastern Oklahoma, Schlesinger said.

Schlesinger started as a brain surgeon, with emphasis on aneurysms and tumors. “I focused on the tiny, deep parts of your brain. It’s a very fine surgery,” he said. Not too long after he started his practice, computer integration was introduced and he became good at integrating computer imagery.

Spinal surgery at the time was leaving large wounds and lengthy hospital stays, Schlesinger said, prompting his innovative surgery procedures. “I knew it was more invasive than it ought to be because I knew what was possible from doing brain surgery and making tiny incisions. I was simply at the right place at the right time, and I knew I could apply my microscopic brain surgery skills to minimally invasive surgery of the spine.”

The least invasive type of surgery is best for all, Schlesinger said. Much of what he treats are complications caused from pinched nerves. “A pinched nerve is basically a crack of the foundation of the spine. The looseness gets trapped inside a nerve. Through lots of trial and error and drawings and trying this and that, we came up with the most minimally invasive and accurate way to free up pinched nerves and stabilize that looseness.”

The most common reason for spinal pain is arthritis buildup, which causes the space to narrow and leads to various types of dysfunction, Schlesinger said. That dysfunction can look like pain or loss of coordination in the limbs. In younger people, the most common cause of spinal trouble is trauma.