It is an age-old psychological dilemma — nature vs. nurture — which debates the extent to which behavior is shaped. In the context, nature stands for inherited traits and genetics, whereas nurture applies to acquired traits, learned or conditioned over time. For too long, many of the stigmas attached to mental health have centered, in some way, around the nature part of this comparison. While there is merit to the inheritance of some disorders, much of the time there is a cause behind the curtain.

As we come to better understand the complex branches that stem from the trunk of mental health — be it depression, alcoholism, anxiety, post-traumatic stress disorder (PTSD) — the more we find a similar term that all these byproducts revolve around. The root cause in many cases — adverse childhood experiences (ACEs).

The Centers for Disease Control and Prevention (CDC) define ACEs as any potentially traumatic events that occur in childhood, from birth to 17-years-old. These adverse events include experiencing violence, abuse or neglect; witnessing violence in the home; poverty; toxic stress; having a family member attempt or die by suicide; aspects of the child’s environment that can undermine their sense of safety, stability and bonding, such as growing up in a household with substance misuse and familial mental health problems. Also included is the instabilities of either parental separation or the incarceration of a parent, sibling or another member of the household.

As numerous studies show, children who experience significant early life adversities are more at risk of having negative outcomes throughout their lives. This can include everything from risky behaviors that might lead to substance misuse or sexually transmitted diseases, to a lack of a healthy mental state that can fester into depression, severe anxiety and risks of suicide. Additionally, adults that grew up in environments with more instances of ACEs have a lower life expectancy.

“There is a very high correlation between children with ACEs and the symptoms and diagnoses that we treat. All the research really backs that up,” says Courtney Bishop, director of assessment and referral at Pinnacle Pointe Hospital in Little Rock. “Also, we see a lot of children who have [been] abused, [who are] living with only one parent. Because of the population that we do treat, we see a lot of children in impoverished situations. All of those things kind of lend to a higher experience of ACEs.” 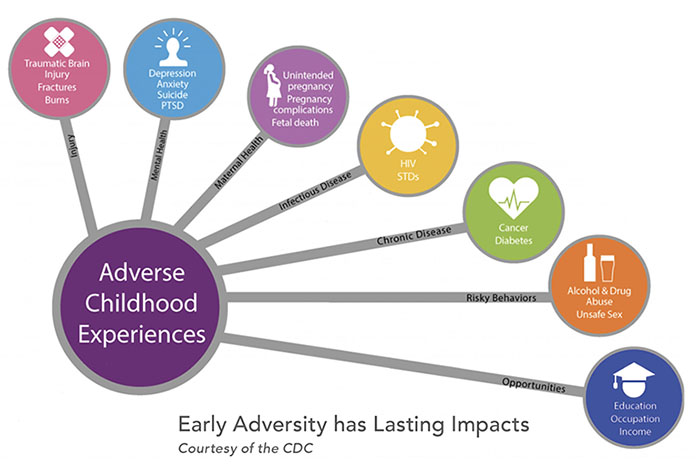 According to the Child and Adolescent Health Measurement Initiative (CAHMI) which analyzes data from the National Survey of Children’s Health (NSCH) and the Behavioral Risk Factor Surveillance Survey (BRFSS), over 45 percent of children and two-thirds of adults in the United States have been exposed to at least one adverse childhood experience. Over 20 percent of U.S. children have been exposed to two or more ACEs.

In Arkansas, the numbers are even more troublesome. Over 54 percent of Arkansas children have one or more ACE, with over 27 percent reportedly being exposed to two or more. The more ACEs one is or has been exposed to, the more at risk that person is in developing chronic conditions, autoimmune disorders, emotional or behavioral problems and obesity, and the less likely that child is likely to develop resiliency and flourishing traits.

In fact, the prevalence of childhood trauma in Arkansas is more frequent than any other state in the country. 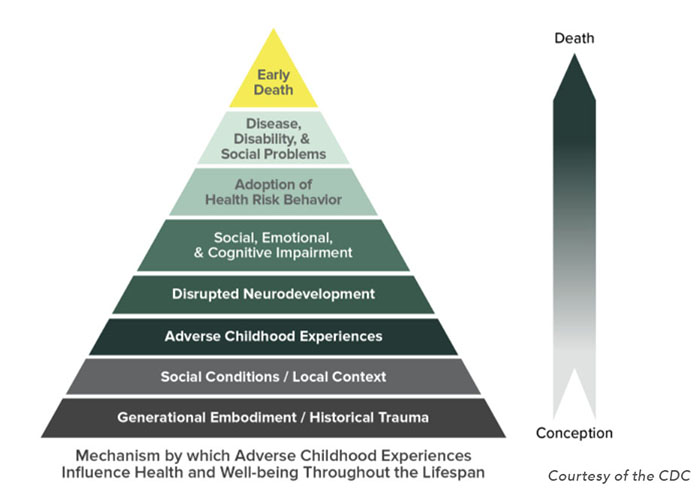 There are a number of factors that are causing the state to fall so poorly in these countrywide comparisons, including its rurality, poverty levels and lack of access to adequate health care. Unfortunately, the complexities and difficulties therein are not one-size-fits-all, and many can be attributed to systemic problems. And recent changes to the state’s health care landscape are proving to be counterproductive.

“Recently, there have been a lot of changes in our Medicaid system [and] anytime there are changes like that, it’s difficult for families to understand and navigate the process because it’s new,” Bishop says. “And these changes require them to have, in some cases, access to technology that a lot of people in rural areas and who don’t have the money don’t have access to. Also, if they don’t understand the changes, if they’re on Medicaid, their services are cut off because they didn’t follow through with something that they didn’t even realize they needed to do. I think the restructure of Medicaid has led to a lot of difficulties accessing services and has also cut the amount of services that people are able to get.” 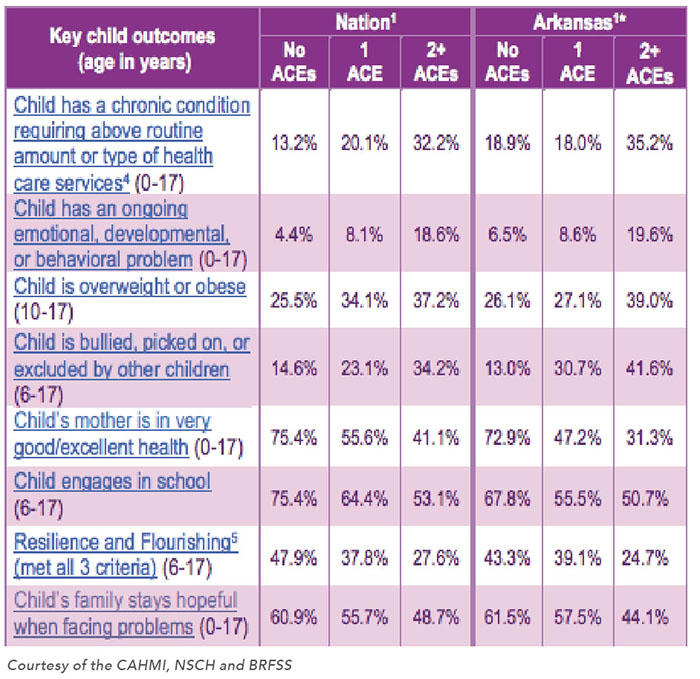 Many of Arkansas’ leaders are working to course-correct, and better protect this generation and the next from starting a leg down. Just this year, Rep. Jamie Scott of North Little Rock introduced a bill requiring the congressional study of adverse childhood experiences. That bill ultimately failed, but furthered the discussion, nonetheless.

The Arkansas Foundation for Medical Care (AFMC) has formed an ACEs and Resilience Coalition, made up of professionals from a number of organizations around the state of Arkansas, including the University of Arkansas for Medical Sciences (UAMS), the Arkansas Department of Health (ADH) and members of the education community. The coalition is made up of two subgroups; data analysis and policy and ACEs awareness training. AFMC also hosted an Adverse Childhood Experiences and Resilience Summit earlier this year.

A program at UAMS has gone statewide that trains social workers and mental health providers in trauma-focused cognitive behavioral therapy.

And ADH is also working vigorously to nullify such experiences. 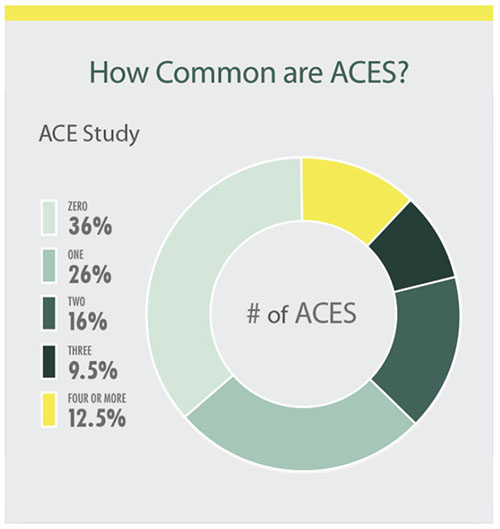 “The Department of Health has been very involved in alerting the medical and public health communities about adverse childhood experiences and their long term consequences,” says Dr. Gary Wheeler, chief medical officer at ADH. “The various home visiting programs overseen by ADH are probably our most effective tool to prevent and mitigate ACES in our communities.”

These voluntary home visiting programs provide families with an assessment of needs, education and support and referral and coordination of assistance, such as food banks or mental health services.

ADH is also collecting ACEs related data on Arkansans 18 years and older through its annual BRFSS survey which is being utilized for potential policy changes.

“Probably the most significant thing to help increase resiliency in children that have ACEs is a stable relationship with a caregiver,” Bishop says. “Also, things like mentoring programs [and] implementing more mental health classes in schools. My child’s school has a character education class that teaches them about empathy and self-regulation skills, self-efficacy, knowing the signs of different mental illnesses and how to reach out for help.

“One of the other things we’ve discussed is training more professionals in screening for trauma. So, not just mental health professionals, but primary care physicians could be screening at well-child checks and teachers and educators can be screening in the schools. And when they see these types of signs, really having a block of resources to educate the families and to help them obtain those resources.” 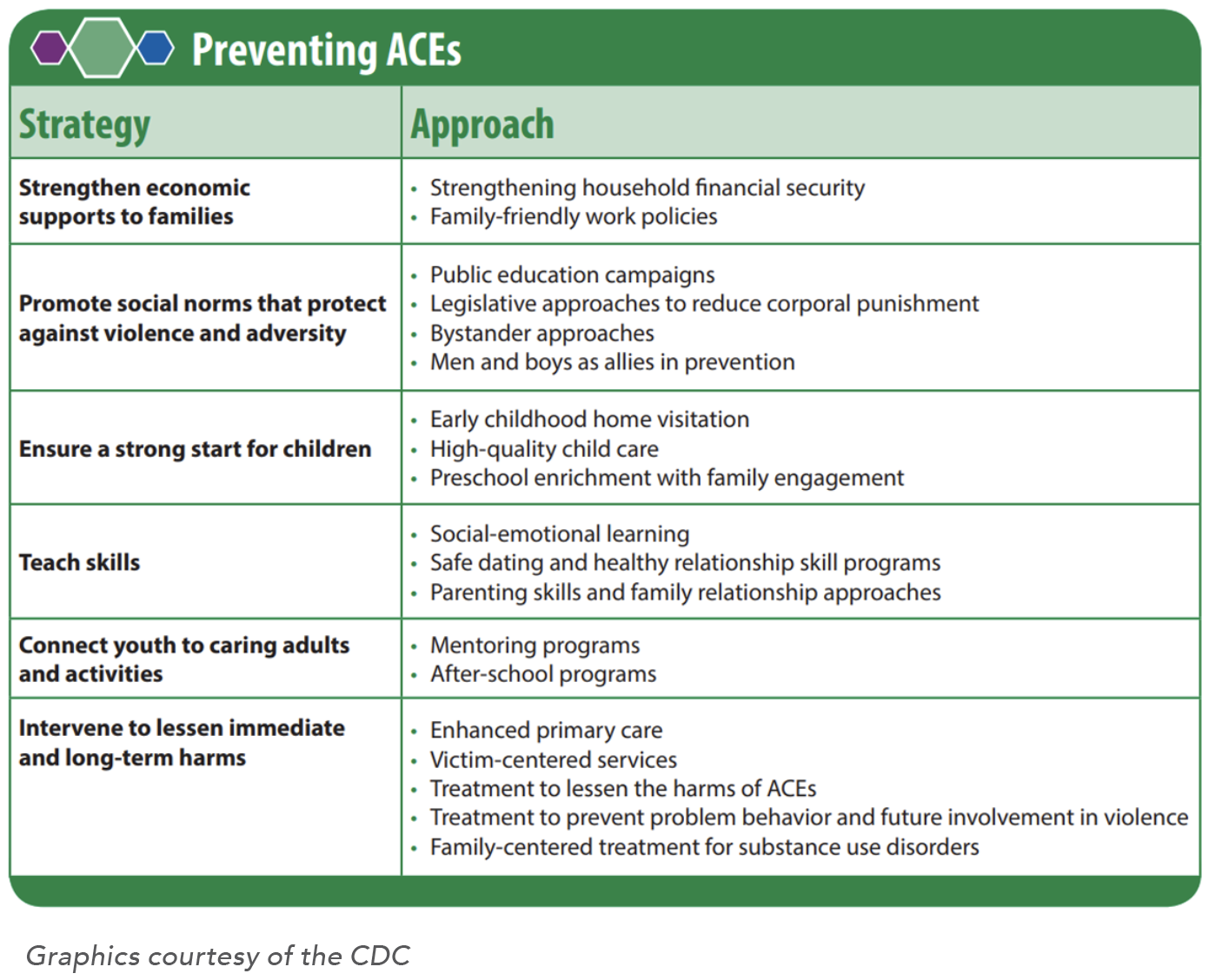 “But at the same time,we’re  cutting our services,” Bishop goes on to say about the state as a whole. “So, I think there are definitely some policy issues that need to be addressed there, because we’re saying one thing, but yet doing something completely different.”

Perhaps, the most essential part of reducing the number of ACEs that our children are exposed to and affected by is awareness — both for individuals with a higher than average “ACE score,” and those who may not, but can help. A high occurrence of childhood trauma does not mean the assurance of later in life detriments; rather, a higher risk. Know yourself. Understand that the “nurture” of your life can potentially have an adverse effect if not dealt with. And rest assured that it’s not your fault.

In Bishops eyes, “We’ve got to shift from a mind-frame of saying, ‘What’s wrong with you?’ to ‘What has happened to you?’”

While you were growing up, during your first 18 years of life:

Did a parent or other adult in the household often …
Swear at you, insult you, put you down or humiliate you?
or
Act in a way that made you afraid that you might be physically hurt?

2.
Did a parent or other adult in the household often …
Push, grab, slap, or throw something at you?
or
Ever hit you so hard that you had marks or were injured?

3.
Did an adult or person at least 5 years older than you ever…

4.
Did you often feel that …
No one in your family loved you or thought you were important or special?
or
Your family didn’t look out for each other, feel close to each other, or support each other?

Did you often feel that … You didn’t have enough to eat, had to wear dirty clothes, and had no one to protect you?
or
Your parents were too drunk or high to take care of you or take you to the doctor if you needed it?

6. Were your parents ever separated or divorced?

7. Was your mother or stepmother:
Often pushed, grabbed, slapped, or had something thrown at her?
or
Sometimes or often kicked, bitten, hit with a fist, or hit with something hard?
or
Ever repeatedly hit over at least a few minutes or threatened with a gun or knife?

8. Did you live with anyone who was a problem drinker or alcoholic or who used street drugs?

10. Did a household member go to prison?

Don’t Believe Everything You Read on Your Cell Phone
February 23, 2021

Making Health a Priority in 2021 with Smoothie King – Without Sacrificing Taste
February 22, 2021

Getting a House Call During a Snow Storm
February 16, 2021
Go to Top
Never Miss An Issue!