“You can’t really address the issues in the homeless community without addressing women’s health, because it’s such an important part of it,” says Katy Simmons. Rachel Achor sits nearby, nodding in agreement. She continues, “Your period is not a social issue, and it’s crazy that it’s treated that way.”

The two, now close friends, originally met through social media. They recognized in each other a passion to change things, and met in early 2015 to see where their energy could take them.

Simmons had experience volunteering with Canvas, a faith-based community outreach for those in need. She suggested that their first step be to define the existing gap, which meant doing some research and deciding where their efforts would be most helpful.

Achor remembers having a meeting with the Van, a local outreach dedicated to helping the homeless, as their project began to unfold.

She couldn’t shake loose what they said – “They told us that people don’t donate feminine hygiene products. … A lot of women use paper towels, leaves, old socks, and things like that when they get their periods.”

This leads to infections and can lead to other health problems, and as healthcare is hard enough for the homeless community to come by, it’s a serious issue.

Simmons added, “I think that’s what hit me. I never thought about being without those items. Once I thought about it I couldn’t get it out of my head.”

Domestic abuse and sexual violence is the leading cause of homelessness for women, with 20-50 percent of all homeless women and children becoming homeless as a direct result of fleeing domestic violence. Homeless women are also far more likely to experience sexual violence than women who are not homeless because of a lack of personal security when living outdoors or in shelters.

On top of that, these women have difficulty obtaining feminine hygiene products and even healthcare due to barriers such as transportation, insurance, and knowledge of where to turn.

Simmons says, “We don’t ever plan to have a storefront – our mission is to fill this gap within existing organizations, that are well known in the homeless community.”

As a result of their hard work, Arkansas Women’s Outreach (AWO) was born, and became an official 501(c)3 in April of last year. Their immediate goal was to begin raising funds to donate feminine hygiene products to women in need. They also have provided an educational component to these women through partnerships with groups like Planned Parenthood, to dispel myths about health issues.

“It is hard to establish trust in that community because there’s almost no consistence in their life, everything is changing all the time. … It’s been really important for us to be consistent – so we go every single week so that they can trust us,” says Achor.

On Wednesdays Achor and Simmons make the trip to Canvas, which hosts a movie night regularly during that time, and drop off their donations. 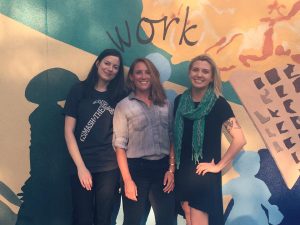 It’s hard to fathom the hardships these women endure. Stacey Bowers, the force behind the snarky, yet stylish locally made Bang-Up Betty brand, knew she wanted to be involved as soon as she heard about the nonprofit, and reached out to Simmons and Achor.

Bowers says, “I was compelled by their cause.” She wanted to design a bracelet in which 100 percent of the proceeds would benefit AWO.

The three worked hard on the design, and are happy with the result.

Bowers remembers, “I didn’t want it to glib, and I really wanted it to embody the people that AWO benefits, but also appeal to the audience that wants to help those people and want to get involved.”

It couldn’t be more fitting, as Simmons adds, “You basically have to be strong as hell to [be a homeless woman].”

By now, Achor and Simmons have seen and heard it all. They want to continue to establish partnerships to be able to serve homeless women, and they hope to be a dynamic organization that bends and folds to the needs of those they serve.

The best part beyond creating lifelong friendships has been creating a platform for women to talk about their bodies, in a safe space without the fear of shame.

Simmons says, “These women grow up in situations where maybe they don’t know what normal is … They live in an environment where everything is so degrading. They might lose sight of themselves as a woman. To acknowledge that they are women and that they have needs – to have that dialogue – gives them a little more value.”

Help the organization through jewelry, by buying the bracelet here. To sign up to volunteer, make a donation, or get involved, visit – http://arkansaswomensoutreach.org/. You can also find them on Facebook. AWO is always looking for the following items – underwear, condoms, pads, and tampons.