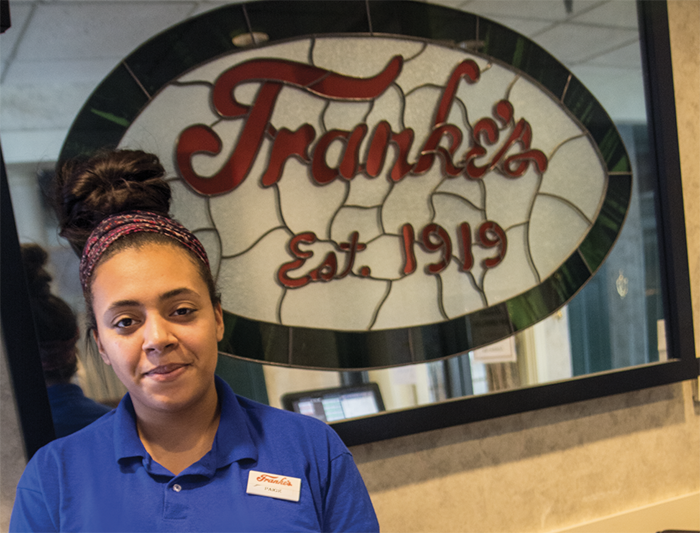 The venerable Franke’s Cafeteria celebrates its centennial in 2019.

Eggplant casserole, anyone? A celebration is in order for the oldest cafeteria in Arkansas.
Generations have adored Franke’s Cafeteria, which maintains a fine selection of Arkansas’ favorite dishes on its generously long line every day.
Carolyn Franke, who married into the Franke’s third generation 40 years ago and who now owns the business, says the stability of the menu is paramount to its success. “The menu has stayed the same,” Franke shares, “and this is very important to us, because how can you argue with success?”
Franke’s Cafeteria didn’t start out as a cafeteria. It began in 1919 as a bakery in the heart of downtown, with fresh loaves and doughnuts. C.A. Franke started the operation, and within five years, he opened an expanded eatery that offered just about anything you desired for lunch or dinner on Capitol Avenue between Main Street and Louisiana. Over the years, Franke’s grew and spread, with large footprints of restaurants in Hot Springs and Little Rock. Many of us recall the dulcet tones of soft music that played overhead while one dined at the popular Franke’s within University Mall. Today, three locations still provide delicious, hot meals – a cafeteria within the lower levels of the Regions Bank Building. Franke’s Sack-It location next door that includes breakfast and sack lunches, and another cafeteria in West Little Rock’s Market Street Shopping Center. 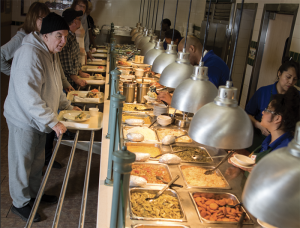 For 100 years, diners have enjoyed great food and even better service at Franke’s.

Franke’s wouldn’t be what it is today without, frankly, Frankes. Carolyn Franke is the third generation of the family to run the business. Her daughter, who runs the eatery’s social media, is its fourth. They’re the last members of the family still associated with the business.
Franke’s is not a buffet. Each item or combination is priced separately – but that means you get a pretty good value in the selections you desire. The white-clad serving staff portions up each dish, and at the end of the line, you may choose your own bread, dessert and beverage. That line contains many Arkansas favorites.
“Eggplant casserole, roast beef and egg custard pie are our most popular dishes,” Franke says. “Of course, we have our chicken and dumplings and ham. We have homemade rolls, all our pies are made from scratch, as is most of the things we cook.”

Many of Arkansas’ classic dishes are available, some on certain days, others every day, and many of which are available nowhere else. Every day there are six or seven types of congealed salad, cucumber and tomato salad, black-eyed pea salad, Ambrosia, pea salad and a full salad bar. Sliced ham, baked or fried catfish and pork chops star amongst the entrees. Here’s where you can always get your fried cabbage with ham, your fried potatoes and green beans with bacon – with your choice of a roll or cornbread or even jalapeno cornbread with butter. And Franke shares the icing on the cake.
“With desserts, we have hot desserts like hot egg custard, banana pudding, peach cobbler, and then we have a bunch of pies. But now we’re serving cakes as well. We have a pie maker from Levy that makes the cakes.”
Even the most calorie-counting diner has options, with sugar-free desserts always on-hand.
Service doesn’t end when you pass through the register section at the end of the tray line. A porter will come to take your tray as soon as you’re seated, so you’re not left trying to find a place for it on your table. They’ll even carry your tray for you if your hands are full or if you need help. A kind waiter will drive a cart by occasionally with refills on coffee and tea and take-home boxes. Other waiters will check on your soft drink. Those beloved employees stick around. Some of the folks who work the line have been around for decades.
“We have one lady downtown who has been with us 40 years – Brenda Adams,” Franke states. “We have a lot of employees who were with us at University Mall. They’re very loyal, and we’re very loyal to them. We treat them right.”
A hundred years is quite a run for a restaurant. What’s next? Franke says the family business will stay the course.
“We’re not going to change a thing. As I said, how can you argue with success?”
Editor’s Note: Franke sold the Franke’s Cafeteria chain to Abraham Delgado, the restaurant’s general manager, in August 2018. While the ownership is changing, the restaurant’s culture will not, according to Franke.
The restaurant will be getting a new addition during its 100th year, too, as a new Franke’s location will reportedly open in Conway.