Through 14 Phoenix for Hope, Keddy Helps Victims of Domestic Violence 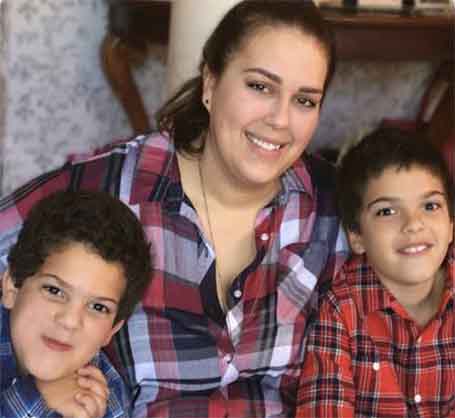 Emily Keddy and her sons

In 2014, Emily Christine Keddy left a six-year marriage, a marriage that was darkened by domestic violence and destruction. Now, Keddy has established a company, born out of experience, that holds fast to her mission of helping others currently suffering on the path she survived not too long ago: 14 Phoenix for Hope, a company that “solicits design ideas and inspirational quotes from self-identified survivors of domestic violence.”

“When I finally left that relationship, I was able to start a new life for me and my kids,” Keddy told AY (About You).“That was ultimately all that I wanted – to live in a positive environment.”

Her story post-abuse started with a season of healing, which would then spur her desire to help others going through the same years later. Leaning on her family and two sons, Keddy found her peace and positive environment.

“That was a very long and difficult journey for me,” Keddy says. “You go through a lot of things when you are in an abusive relationship – not just the physical. There are so many different forms of domestic abuse that these victims and survivors have experienced, even mentally. We all try to cope with the situation and heal in different ways.

“After a few years, I started wanting to help others. I started noticing that a lot of women I knew were in very unhappy, abusive relationships. Some of them did not even realize that this type of treatment was wrong, because either they didn’t have a positive family life or growing up wasn’t a positive experience for them. They didn’t realize that this person is doing these things to them, and it’s abuse.”

Thus, 14 Phoenix for Hope was born. With help from her father, David Moody, Keddy made the jump from working in data entry to owning and operating her own business. The company – which is named in honor of the year she escaped domestic abuse and the symbolism of a phoenix rising from the ashes – currently sells t-shirts that are designed by female victims and survivors of domestic violence. In addition, Keddy has dedicated her business to give a portion of its proceeds to organizations that help victims and survivors of domestic violence.

“I had started playing around with the idea of a business,” Keddy says. “My dad has been a really great supporter through it all. He was really great with his advice as I started getting this up and running in the right direction. He knows the business, while I bring the passion.”

Launching the week before July, Keddy is already looking ahead at what she wants 14 Phoenix for Hope to be for women who stood in her shoes. She mentioned that she desires for her business to be a place for hurting women to retreat to, glean advice from and find community in. Keddy hopes to expand her product content, as she is looking toward inviting women who survived domestic violence to submit artwork, design and inspiration.

“I haven’t had much opportunity to actually help people in person, be there for them while they’re going through this hard push in life as they’re trying to get out on the other side,” Keddy says. “That has just motivated me even more to just help and fight for these women. It makes me emotional – I know exactly what they’re going through. That is not a life we deserve to be living.

“That is my mission. Help these women and be able to give back to these organizations and charities that are also helping and fighting for the same cause. So that’s going to be what I’m doing.”