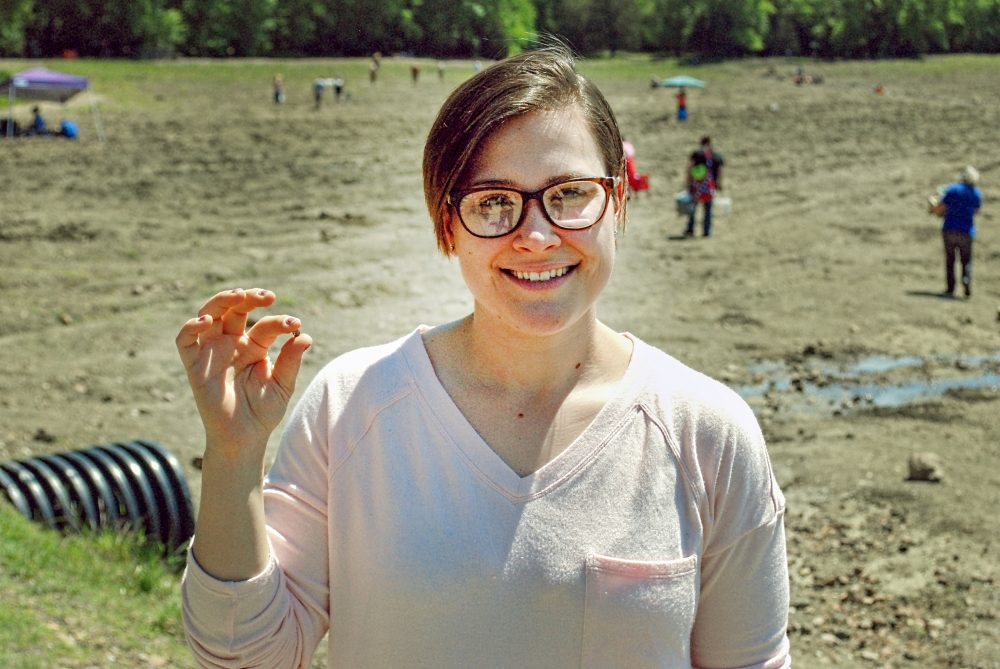 Gem found on surface in less than 10 minutes

(Murfreesboro, AR) – Victoria Brodski visited Arkansas’s Crater of Diamonds State Park for a special birthday celebration. The 25-year-old had known about the unique park for years and finally decided to visit after hearing about a 7.44-carat diamond found in March.

Brodski and her family drove in from Tulsa, Oklahoma on Saturday, May 6 and bought tickets to enter the diamond field at 9:00 a.m. A few minutes later, she was sitting with her daughter and brother by a culvert near the mine entrance when she picked up what she thought was a pretty piece of glass. Noting its shine, she put it in a plastic bag and continued searching. 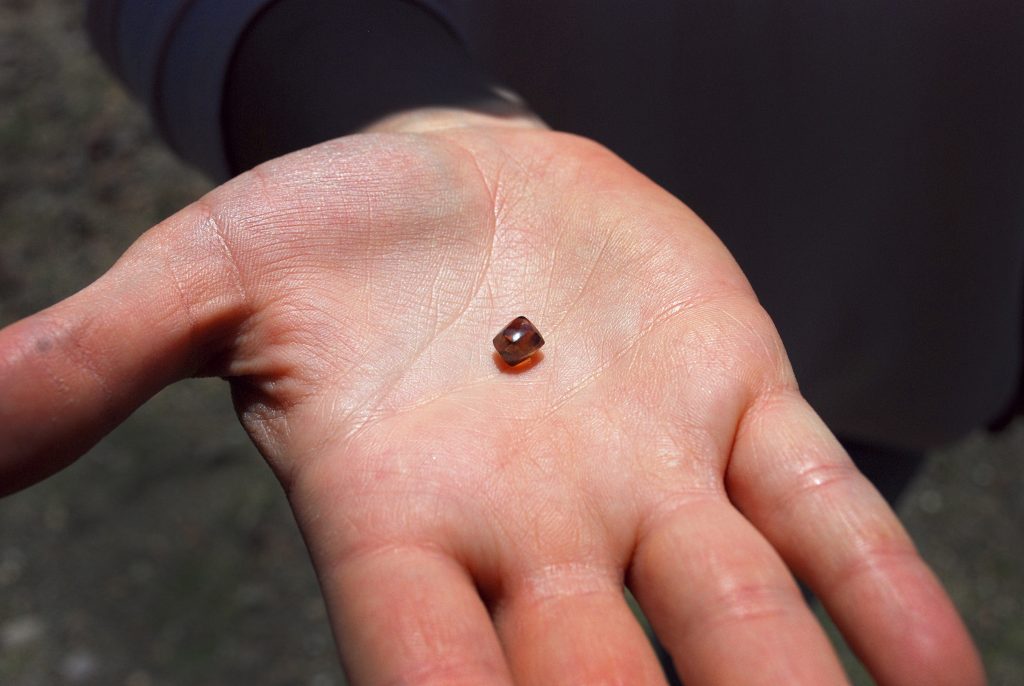 A couple hours later, Brodski walked to the park’s Diamond Discovery Center to see what real uncut diamonds look like. It was there that she first realized she may have found more than just glass. “I was looking at pictures of diamonds on display and noticed their similarity to what I had found,” Brodski said. She quickly showed her find to park staff, who confirmed that she had found a beautiful brown diamond.

Park Interpreter Waymon Cox pointed out, “Mrs. Brodski was searching where running water had deposited lots of gravel in the plowed field. Diamonds are a bit heavy for their size, so they are often found near other heavy rocks and minerals.”

Brodski’s diamond was one of three found on the surface on May 6. It is the second-largest diamond found so far in 2017, topped only by the 7.44-carat brown diamond found by a 14 year old. According to Cox, “Mrs. Brodski’s diamond is one of the more beautiful brown diamonds I’ve seen from the park. It’s about the size of a bead, with a dark brown color, like raw honey. It has a smooth, rounded surface and appears free of blemishes, inside and out.” 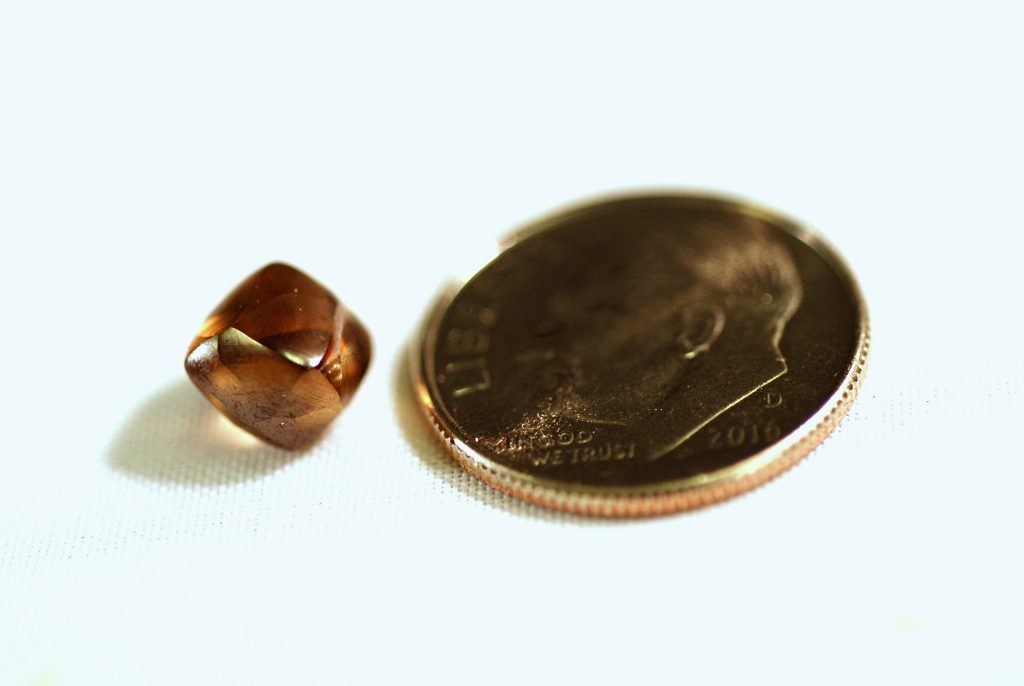 It is a tradition at Crater of Diamonds State Park for visitors to name their finds. Brodski dubbed her gem the Michelangelo Diamond, because her family decided to use the names of the Teenage Mutant Ninja Turtles as code words, in case any of them found anything. Brodski noted, “When I learned that I had found a diamond, I called my mom and said, ‘Michelangelo.’”

When asked about her plans for the Michelangelo Diamond, Brodski said that she will sell it and split the money with her family. According to her, “We made a contract before we came, that we would split anything we found among the four of us.” Her advice for other first-time visitors? Brodski suggested, “Prior to looking for diamonds, find out what a diamond looks like. I would have been a lot more excited if I had known it was a diamond when I picked it up!” 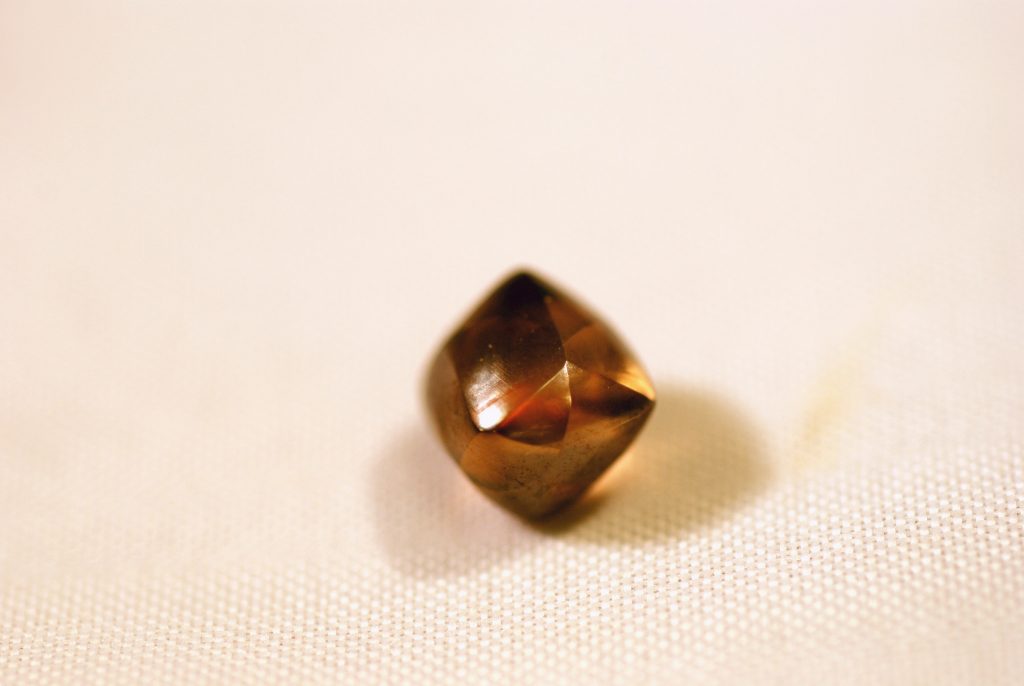 Diamonds come in all colors of the rainbow. The three most common colors found at Crater of Diamonds State Park are white, brown, and yellow, in that order.

In total, over 75,000 diamonds have been unearthed at the Crater of Diamonds since the first diamonds were found here in 1906 by John Huddleston, a farmer who owned the land long before it became an Arkansas State Park in 1972.

The largest diamond ever discovered in the United States was unearthed here in 1924 during an early mining operation. Named the Uncle Sam, this white diamond with a pink cast weighed 40.23 carats.

Other notable diamonds found by visitors to the state park include the Amarillo Starlight, a 16.37-carat white diamond discovered in 1975, which ranks as the largest diamond ever found by a park visitor.

The second-largest find by a visitor is the Star of Shreveport, an 8.82-carat white gem unearthed in 1981. In 2011, a visitor from Colorado found an 8.66 -carat white gem named the Illusion Diamond, which is the third-largest gem found at the park.

In June 2015, another visitor from Colorado discovered an 8.52-carat white diamond named the Esperanza, the fifth-largest diamond found by a visitor. In September 2015, celebrated diamond cutter Mike Botha cut the Esperanza into a 4.6-carat triolette shape during a public event in North Little Rock. The diamond was later graded colorless and internally flawless by the American Gem Society and valued at $500,000.

Another notable diamond from the Crater of Diamonds is the 1.09-carat D-flawless Strawn-Wagner Diamond. Discovered in 1990 by park visitor Shirley Strawn of Murfreesboro, this white gem weighed 3.03 carats in the rough before being cut to perfection in 1997 by the renowned diamond firm Lazare Kaplan International of New York. The gem was certified as perfect in the laboratory of the American Gem Society. It is on display in a special exhibit in the Crater of Diamonds State Park visitor center.

An additional gem from the Crater is the flawless 4.25-carat Kahn Canary diamond that was discovered at the park in 1977. This uncut, triangular-shape gem has been on exhibit at many cities around the U.S. and overseas. It was featured in an illustrious jewelry exhibition in Antwerp, Belgium, in 1997 that included precious stones from throughout the world including the Kremlin collection, the Vatican, Cartier, and Christies. In late 1997, the Kahn Canary was featured in another prestigious exhibition at the American Museum of Natural History in New York entitled “The Nature of Diamonds.” Former First Lady Hillary Clinton borrowed the Kahn Canary from its owner, Stan Kahn of Pine Bluff, Arkansas, and wore it in a special, Arkansas-inspired ring setting designed by Henry Dunay of New York as a special way to represent Arkansas’s diamond site at the galas celebrating both of Bill Clinton’s presidential inaugurals.

Crater of Diamonds State Park is located on Arkansas Highway 301 in Murfreesboro. It is one of 52 state parks administered by the State Parks Division of the Arkansas Department of Parks and Tourism.