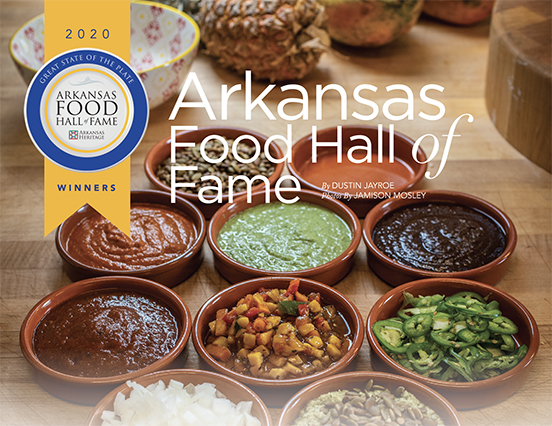 The next class of “taste-setters” was announced on February 24 for the Arkansas Food Hall of Fame, a program of Arkansas Heritage. Winners were announced in five categories: Gone But Not Forgotten, Food Themed Event, Proprietor of the Year, People’s Choice and Food Hall of Fame.

Coming into the induction ceremony for the carefully selected winners, the finalists for each category were:

You may have seen these finalists in our February issue, and now have the chance to dive a little deeper into the stories of all the inductees. Congratulations to all of the nominees, finalists and, of course, the winners, who will now be forever enshrined in Arkansas food history.

Stay tuned to nominate your favorites for the 2021 class in the fall of 2020 and celebrate our unique Arkansas food heritage. To learn more about the program and its inductees, go to www.ArkFoodHOF.com.

“Food is not just something we eat; it brings us together while teaching us about one another’s cultures.”

— Stacy Hurst, Secretary of the Department of Parks, Heritage and Tourism 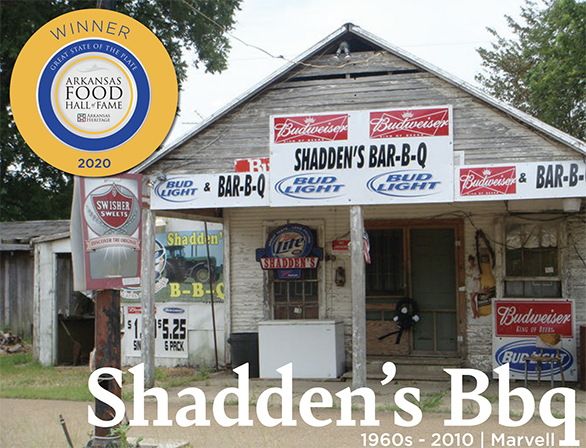 Gone But Not Forgotten — Winner

“This award remembers the collective culinary legacy of a once-and-always influential Arkansas restaurant that has since ceased operations.”

For more than 40 years, regional travelers of Arkansas and beyond would flock to the city of Marvell to cure their empty bellies with some of the best barbecue in the state — regulars might even say the best in the entire South.

Helmed by founder Wayne Shadden from its first day to its last, Shadden’s was an epitomizer of good, Southern fare. It was a hole-in-the-wall building that was more than 100 years old and one of the only occupants of U.S. Highway 49 for miles in a town of fewer than 1500 people. More often than not, the best food is served up at these hidden treasures, and Shadden’s was no exception to that rule.

Unfortunately for our taste buds and our hearts, all stories are told with a beginning, middle and end, and all good things (even the best) do eventually find the latter. Shadden passed away in 2010, and his store and famous barbecue joint soon followed. But while the icon and the brick and mortar may be gone, his memory and that of his delicious barbecue remain and will now never be forgotten. The legacy of Shadden’s BBQ is forever etched into history as an inductee into the Arkansas Food Hall of Fame. 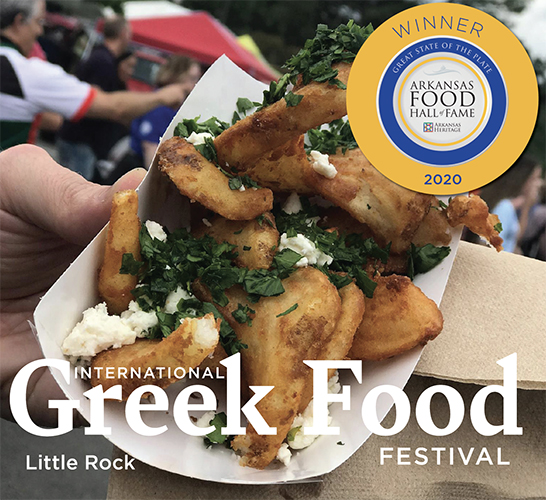 “Opa!” is what we all belted out upon learning the news that the International Greek Food Festival was announced as a winner and inductee into the Arkansas Food Hall of Fame.

Held at the Annunciation Greek Orthodox Church in Little Rock, the more than 35-year-old Greek Food Festival has staked its flag atop the pinnacle of the best events in the state — perhaps most famously for the food served. The menu at this acclaimed annual celebration is filled with history and is reflective of the best that is the societal melting pot. The church boasts a many-cultured congregation with a long line of cooks from an even longer line of backgrounds, including Greek, Armenian, Georgian, Romanian, Russian, Indian, Middle-Eastern, English and American. As they proudly proclaim, “From these cultures has evolved this distinctive collection of foods identified with the Greek Orthodox Church — a style of cooking that not only captures the traditions of our heritage but makes eager eaters call for more.”

And as much as we Arkansans love our food, this festival brings more to the table than just loukaniko and pastitsio. Other attractions include the famous old world market, live entertainment, a kid’s area helmed by Easterseals and tours of the beautiful church.

Beyond the plates and stages, the festival is also a proud provider and partner to its community. Over the festival’s tenure, it has raised and donated more than $1.5 million to 30 different local charities from the event’s entry fees — which are $3 or three canned food items. 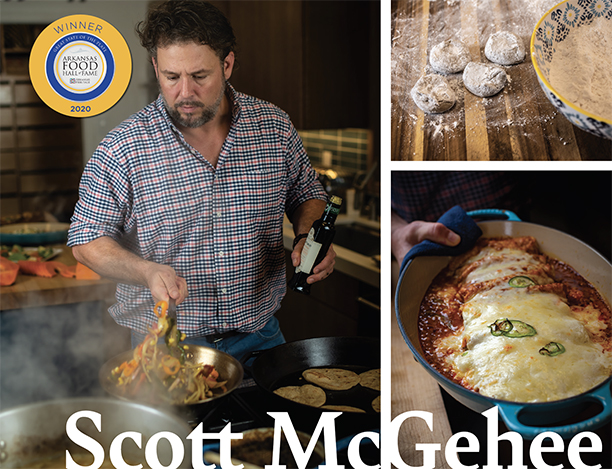 Proprietor of the Year —  Winner

There is no doubt to Scott McGehee’s stardom in the central Arkansas culinary arena, if not by name alone, then certainly by his work.

McGehee is one of the hands involved in Yellow Rocket Concepts, the parent company behind some of the state’s beloved eateries, such as ZAZA, Big Orange, Local Lime, Heights Taco & Tamale Co. and Lost Forty Brewing.

An Arkansas native, McGehee briefly branched out westward where he honed in on his culinary expertise. He graduated with honors from the California Culinary Academy in San Francisco and was also an apprentice of Alice Waters’ at the famed Chez Panisse restaurant in Berkeley, Calif. After this educational stint on the West Coast, McGehee came back home to Arkansas in 1999, bringing the breadth of culinary knowledge he had gained back to Natural State patrons as he opened Boulevard Bread Co.

From those first modest moments to the empire that he has created today, the motivations are the same: A love for Arkansas and a passion for food. McGehee and Yellow Rocket Concepts serve the palates of Arkansans faithfully and deliciously, now with a little more flair courtesy of McGehee’s newfound status as a Hall of Famer — a much-deserved honor for someone with as many fingerprints on the state’s comestible landscape as his. 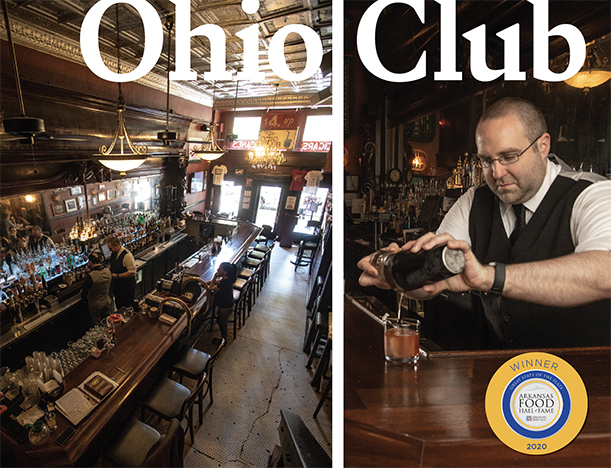 Referring to oneself as the “oldest” in any regard is quite a hefty claim to make, especially when related to liquor in the South. But for the Ohio Club, bragging rights are a big deal and history is on its side of the argument.

Ohio Club’s legend began in Hot Springs in 1905 in what was originally a bar and casino that became a magnet for travelers from all over the country. Given the time of history, it might be easy to guess some of the highest profiled clientele. The likes of Al Capone and his arch-nemesis Bugs Moran,  Bugsy Segel and even Lucky Luciano were among the most famous gangsters who frequented the joint. Babe Ruth was also a storied visitor during his trips to the Spa City for spring training while he was a Major League Baseball player.

Over the years, the bar battled through prohibition and came out on the other side, becoming a speakeasy and cigar store for a spell. It even dabbled in illegalities like gambling for over 50 years, well after anti-gambling laws were passed in 1913. But it never shut its doors and remains as one of the best nights in Hot Springs, and it still continues to feature live music all seven nights of the week, after all this time. Your bartender might not be the one who served the Great Bambino, but the historic locale is the same. 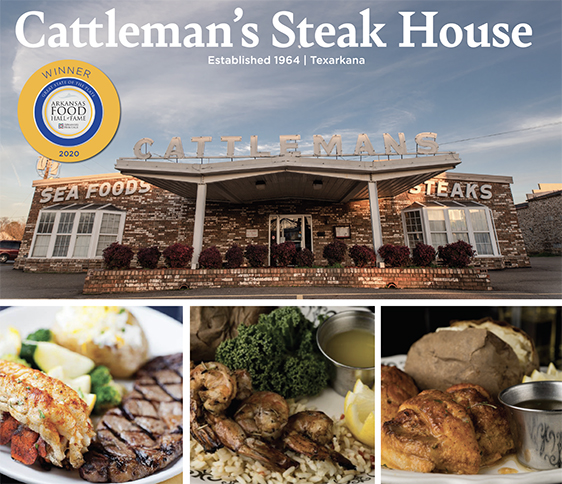 Cattleman’s Steak House opened in 1964 by Roy Oliver, a tough, hardworking businessman who had high standards for his restaurant. It quickly gained a reputation for its great food and service, and soon became the spot where Texarkana’s (Arkansas and Texas) politicians and community leaders met and mingled. Roy’s son, Joe Neal Oliver, took over the restaurant and proved to be just as industrious as his father. Today you can find Joe Neal darting around the restaurant (wearing his signature red apron) checking on and chatting up guests.

A key to Cattleman’s success is in its consistency — it maintains its upscale 1960s atmosphere, the food is still made from scratch and the staff, many of whom have worked there for decades, are always warm and attentive. No Arkansas restaurant journey is complete without ordering a steak from Cattlemen’s and letting Joe Neal visit with you while you enjoy it.

“Cattleman’s has stood the test of time. The food is great and the atmosphere takes you back to a true dining experience. I cannot think of another long-standing restaurant that is guided by what makes a restaurant great – great food, great atmosphere and great people!” — Caroline, Texarkana. 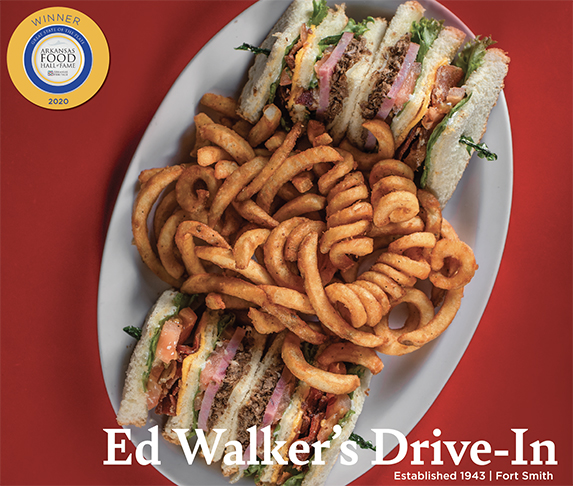 The classic sign tips its hand! Ed Walker’s Drive-In recalls a time when rock ‘n’ roll ruled the airwaves and the hop was the social hub of small-town America. Opened in 1943 and a bit ahead of its time, the former gas station switched to filling stomachs when the owners noticed that patrons were always asking for a place to grab a quick bite.

Ted Cserna, the current owner, understands how important Ed Walker’s is to Fort Smith and is adamant about maintaining the restaurant’s 1950s feel and classic menu, which still includes homestyle hamburgers, fresh-baked desserts and its “world-famous” French dip.

“When it’s common to see restaurants come and go, Ed Walker’s Drive-In’s longevity is a testament to its success. You don’t need upscale menus or wild gimmicks, what is most important is great, simple food and friendly service.” — Sam, Little Rock 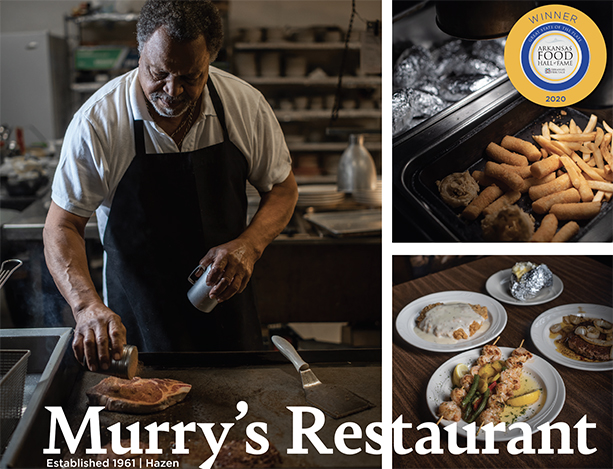 The authenticity of Murry’s Restaurant is so pronounced, you’d be forgiven if you thought it was too good to be true. Even the restaurant’s beginnings sound as if they were pulled from a movie. In 1961, after leaving the Army Corps of Engineers due to an injury, Olden Murry opened a restaurant in a railway passenger car in DeValls Bluff, and using his engineering know-how, continued to expand the restaurant by stacking on extra cars. In 1986, the restaurant was taken over by Olden’s daughter, Rebecca, and her husband Stanley Young. The next year, the couple moved to its current location just outside of Hazen off Highway 70.

What makes Murry’s so special? According to Southern Living Magazine, the restaurant makes the best catfish in the South which Stanley credits to quality ingredients and keeping things simple in how they prepare and cook it. The restaurant might be just as famous for its great hospitality and amazing staff, who will do just about anything to make you feel at home.

“Stanley and Rebecca Young serve quality food that keeps you coming back for more! From the best catfish anywhere, homemade onion rings, and Stanley’s mouthwatering steaks, Murry’s Restaurant is an experience like no other.” — Rick, Hazen.