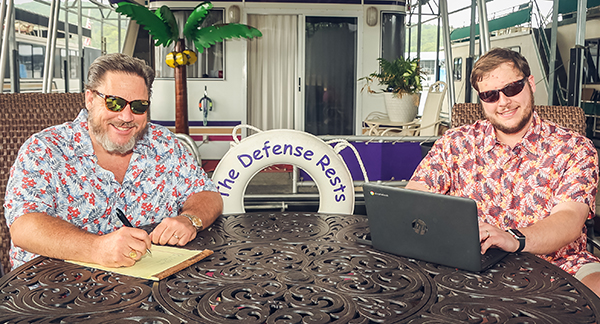 What do you do when your birth announcement proclaims you are a “Future Attorney,” and both of your parents are in law school when you are born? You go to law school, join the firm your parents started right out of law school, and then start to prepare to take the helm leading the firm into the future.

William Owen James III (WOJIII) was born April 12, 1994. The birth announcement for WOJIII featured an announcement that the “Future Attorney” had been born. The birth occurred just a couple of weeks before the elder (WOJJR) took his last round of finals at the UALR Bowen School of Law before graduation. Judge Patti James (mom) was finishing her second year of law school when WOJIII was born. Six Months later, the James Law Firm was opened in an 8×10 office in the Pyramid Building in Downtown Little Rock.

Now, 28 years later and a total of nine attorneys in the firm, the James Law Firm and founding member Bill James are widely recognized as being among the top criminal defense firms in the State of Arkansas. What is even more notable, is that WOJIII is also being recognized as one of the best criminal attorneys in Arkansas just three years after graduation from law school. Like father, like son?

The James Law Firm was founded on the idea that it is possible to give clients aggressive representation at a fair price. When Bill James was asked what the secret of the success of the James Law Firm has been, he responded that it was “largely due to a willingness to go to trial on even the toughest cases combined with the ability to get better than average results in those tough cases.”

When William James was asked about his take on the secret to the firm’s success, his answer was simply that “we work hard, and we play hard.” While that recipe doesn’t work in all cases, it certainly seems that the James Law Firm has hit on something that seems to be working generation after generation.