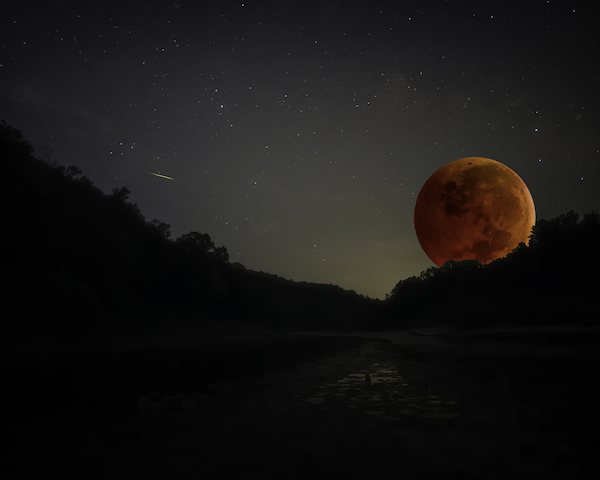 From lunar eclipses to meteor showers to comets, these are some of the most exciting stargazing events in 2022. 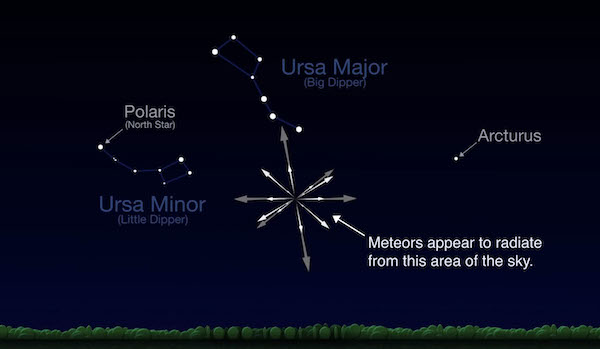 The start of a new year always means the return of the Quadrantids. The annual shower typically spans the first week of January, and its peak rates fall on the night of Jan. 3 and morning of Jan. 4 this year. 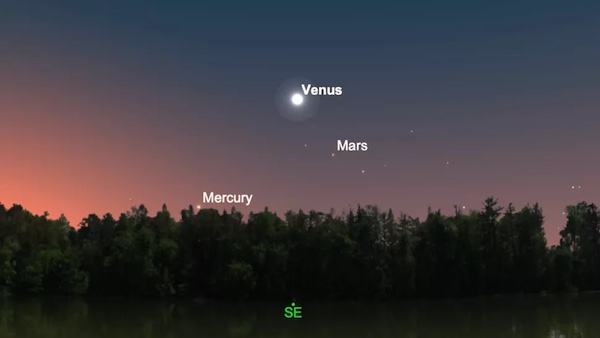 Our neighbor Venus is steadily approaching its highest point in the morning sky this month, meaning it will be very well-placed and shining brightly for the Valentine’s Day holiday. Which is perfect timing considering Venus is the Roman goddess of love, beauty and desire. Look to the southeast in the waning hours before dawn. 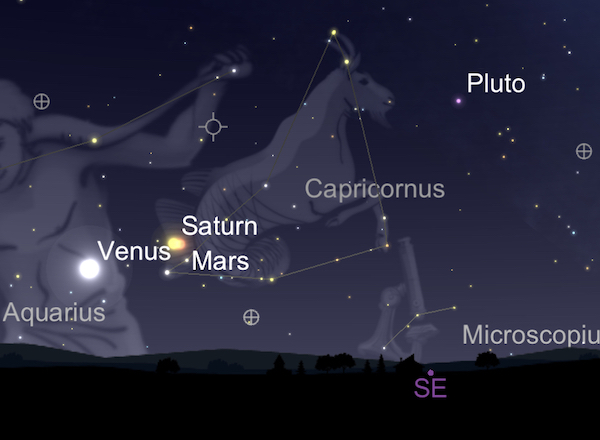 The mornings of late March and early April will be headlined by Venus, Mars and Saturn. The trio will seemingly dance around each other in a tight triangle during this two-week span, culminated by a very close approach of Mars and Saturn — to within a half-degree — on April 4. 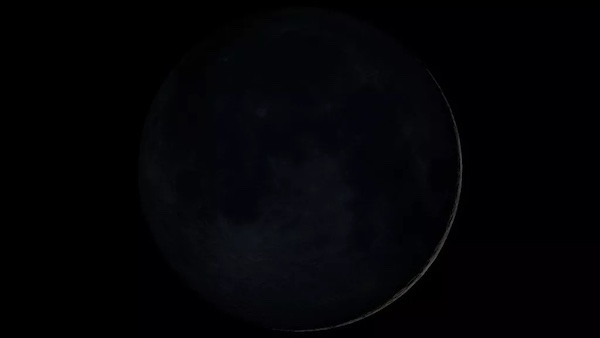 Many are familiar with the phrase “Blue Moon,” which refers to a phenomenon when two full moons occur in a calendar month. But its sibling, the Black Moon, is also a celestial event worth noting. A Black Moon is when two new moons happen in the same month, which happens in April this year. There’s nothing to actually see here — just enjoy a second time stargazing without a moon crowding out all the starlight. 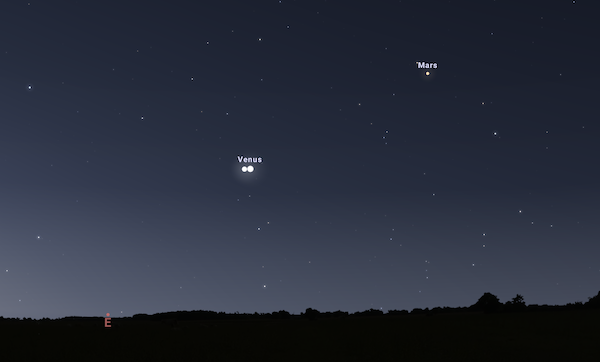 The tight pairing of Venus and Jupiter on the morning of April 30. (Stellarium)

Remember the “Christmas Star” that was all the rage two holiday seasons ago? That was technically just a very close conjunction of Jupiter and Saturn, and, while it was a rare happening between those two, planetary conjunctions from our vantage point happen fairly frequently. Although, not always as close as this one between Venus and Jupiter. The pair will come to within 0.14 degrees of each other on the morning of April 30, appearing to “merge” together as one singular point of light, and close enough to fit within the same view field of a telescope. Look to the southeast before sunrise. 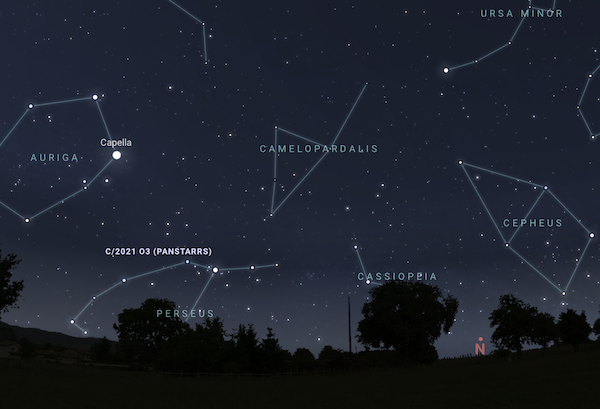 C/2021 03 perched above the constellation Perseus on the night of May 7. (Stellarium)

You may have missed it between all the other news of 2021, but last year, scientists discovered a new comet — Comet C/2021 03 (PanSTARRS) — which is currently approaching the inner solar system. Its perihelion, or closest point to the sun, is calculated to occur around April 20; its closest approach to Earth will be around May 7-9. The unpredictability of comets in general and the novelty of this one makes it hard to predict if it will be a stunning sight for the naked eye or just a dim fuzz through binoculars, but keep an eye out for this event either way. It might be the last chance we ever have to see the comet, as it has a chance to be flung out into the vastness of the galaxy, and never return. 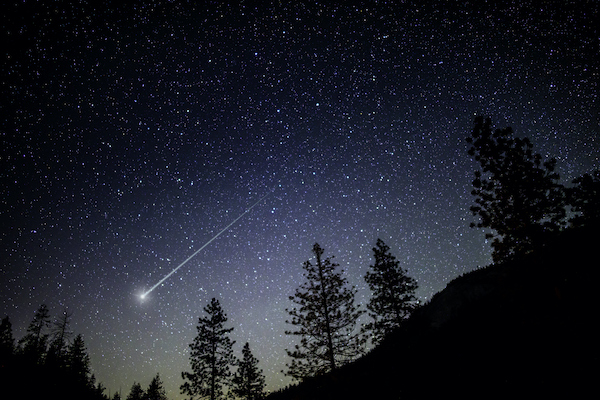 The Eta Aquarids is a meteor shower consisting of debris left behind by Halley’s Comet. It’s usually a much more fruitful event for the Southern Hemisphere, but plenty of “shooting stars” can also be seen in the Northern Hemisphere. The shower is active from April 19 to May 28, and peaks during the first week of May. 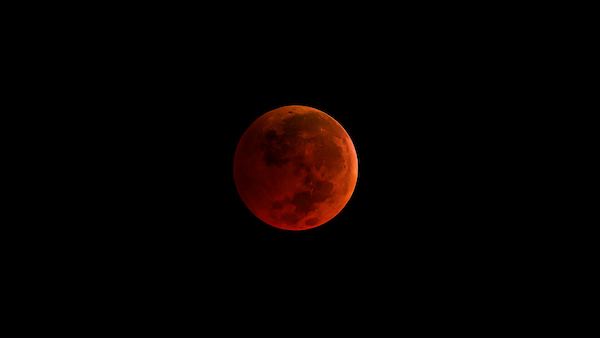 Plenty of chatter made the rounds about the lunar eclipse of November, but that was only a partial one at 97 percent. In May, we get a total lunar eclipse, a full-fledged “Blood Moon.” This also coincides with the full “Flower Moon” of the month, so this is being dubbed the “Flower Moon Eclipse.” Nearly the entirety of North America will be able to witness the event, which will begin at around 8:30 p.m. CDT. According to National Geographic, the moon will reach its “deepest and most dramatic red” at 11:11 p.m. Do with that information as you “wish.” 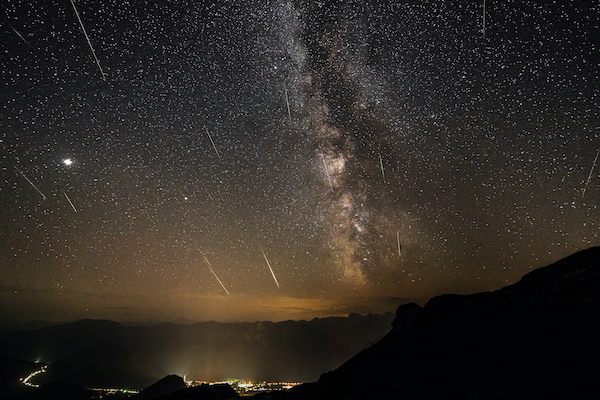 Like the possibility of Comet C/2021 03, chalk this one up as a “maybe” — but a maybe that will be well worth your time if it transpires. Usually, the Tau Herculids shower only results in a couple of meteors per hour, and many may never have even heard of it. It consists of debris left behind by the fragmenting of Comet 73P/Schwassman-Wachmann-3 in 1995, and this year the Earth is forecasted to pass through one of the richest particle pools of that dead comet. Space.com is calling this “perhaps the most dramatic sky event in 2022.” 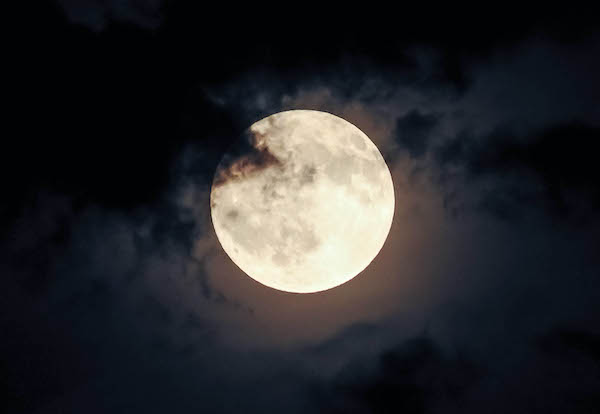 The first of three supermoons will shine in June. A supermoon is when a full moon reaches its perigee, or point closest to Earth. The difference is usually marginal, however. 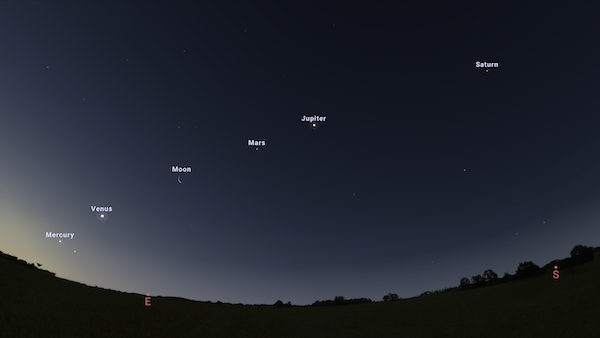 Before dawn on June 24. Uranus (not charted) will be between Venus and the moon. (Stellarium)

A rare alignment of six (!) planets will occur toward the end of the month. Mercury, Venus, Mars, Jupiter, Saturn and Uranus will form a plotted line in our dawn sky. Uranus will be the most difficult to observe, but the other five will dazzle quite brightly. What’s more: The ones traditionally regarded as naked-eye observable — Mercury, Venus, Mars, Jupiter and Saturn — will also be in the correct order in which they orbit the sun. 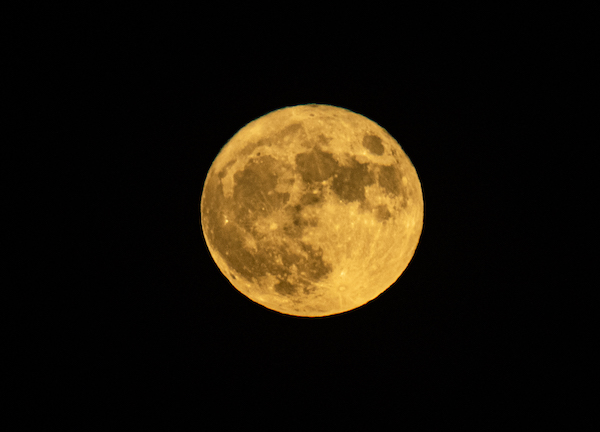 The second supermoon of 2022 will also be the biggest full moon of the year. 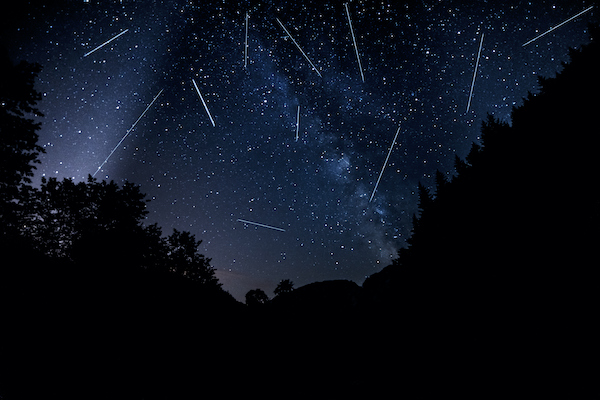 The Delta Aquarids is made up of debris from comets Marsden and Kracht, and generally runs annually from July 12 to Aug. 23. It’s another that’s best-viewed below the equator, but those in the Northern Hemisphere are in its visibility range a couple of hours before and after midnight. This year’s shower lines up with the New Moon, meaning no moonlight competition for the shower. 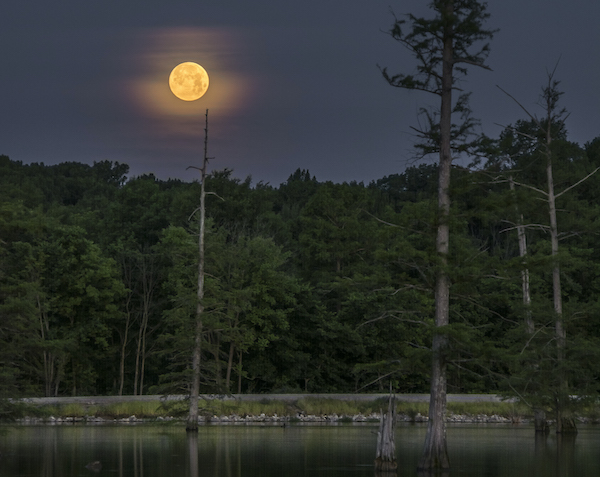 A full moon over Mallard Lake in Manila. (Tony Milligan)

The third and final supermoon of 2022. 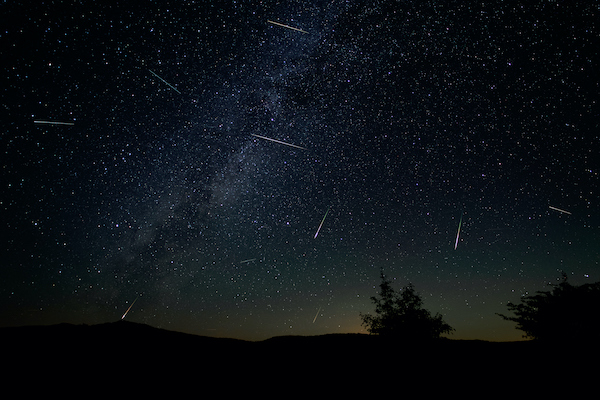 One of the best meteor showers in all of the heavens, the Perseids runs from July 17 to Aug. 24, peaking in mid-August. The full moon will cut into the number of observable meteors this year, but it should still be a worthwhile stargazing event. 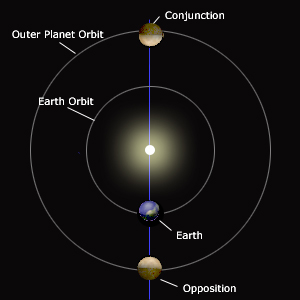 The gas giant Jupiter reaches a unique opposition this month, or point directly opposite the sun in the sky. This will also mark its closest approach to Earth, known as its perigee. It will be the closest moment between Jupiter and Earth since 1963. 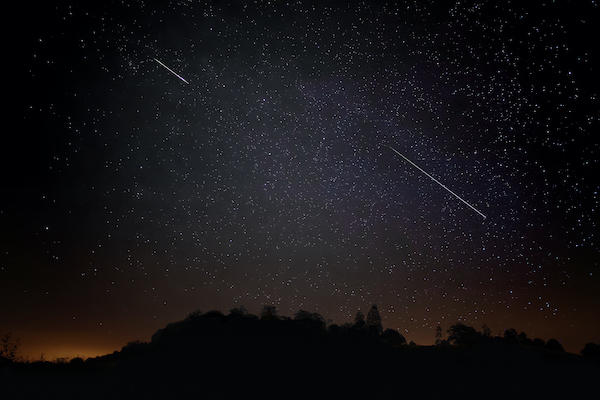 The Orionids is another meteor shower formed by the orbit of the famous comet Halley. While not one of the largest showers, it’s always a favorite because of this fact, and since it radiates from another celestial darling — the constellation Orion. The Orionids runs from around Oct. 2 to Nov. 7. 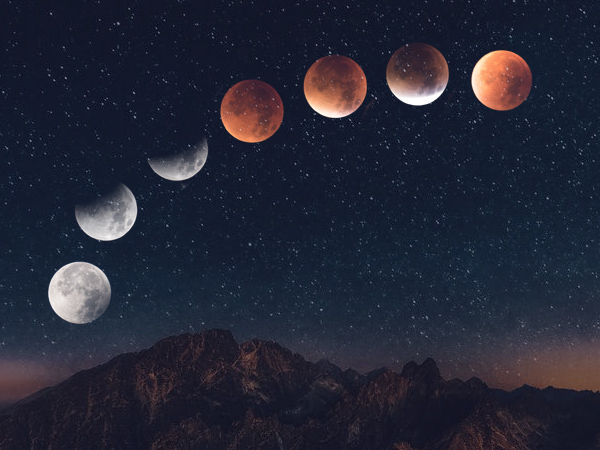 The second lunar eclipse of 2022 and last one of totality until 2025 happens in November. However, this time the United States’ viewable range will be divided, with the central/eastern portions of the country only seeing a partial eclipse. 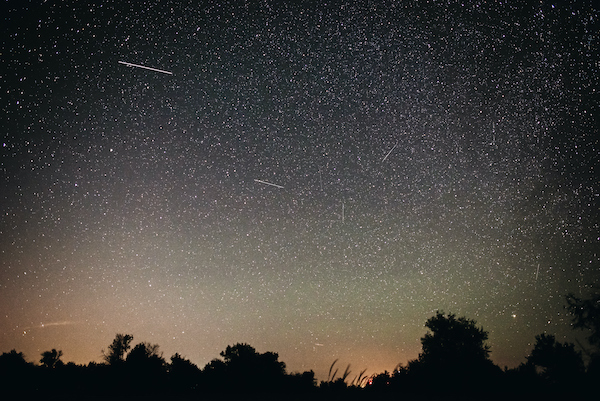 The consensus is split around the Leonids this year. The annual shower, formed by debris from comet 55P/Tempel-Tuttle, is typically an average event. However, some years have seen incredible outbursts, the last occurring in 2001. Some are forecasting a normal shower with a couple dozen or so meteors per hour; others, however, are predicting the shower might be enhanced by a dense cloud of particles expelled by the comet in 1733. The most optimistic outlooks predict a potential of 200-plus meteors per hour. But like the Tau Herculids, we won’t really know until we get at or near the date. 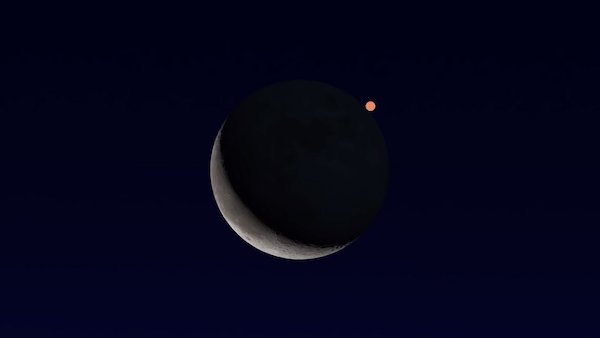 The moon creeps in front of Mars during a past-year occultation. (NASA)

Mars will get plenty of time in the limelight — or moonlight — to close out the year. On this night, the red planet will encounter occultation, meaning the moon will orbit directly in front of it, blocking it from view. 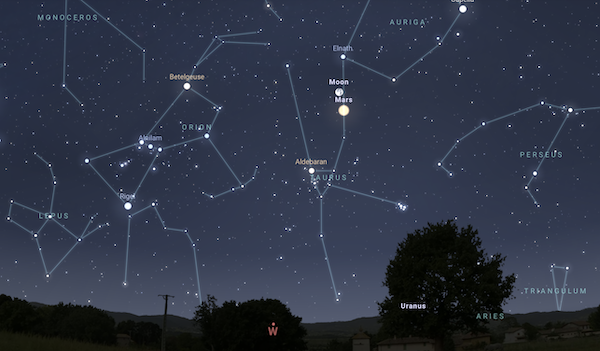 The following evening, Mars will be at peak brightness in the sky when it reaches its opposition. Since our next-door neighbor only hits opposition every 26 months or so, the next one won’t happen until 2025. 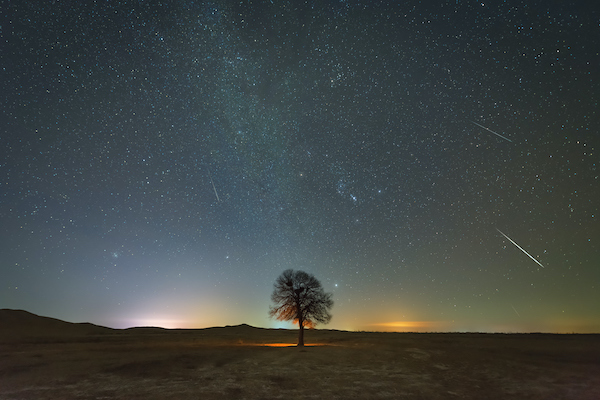 This would likely be the best meteor shower to see of 2022 (or at least the most reliable), if not for the heavy moonlight coinciding with its peak for the second year in a row. However, it’s a strong enough shower for plenty of meteors to still make the rounds for our eyes.