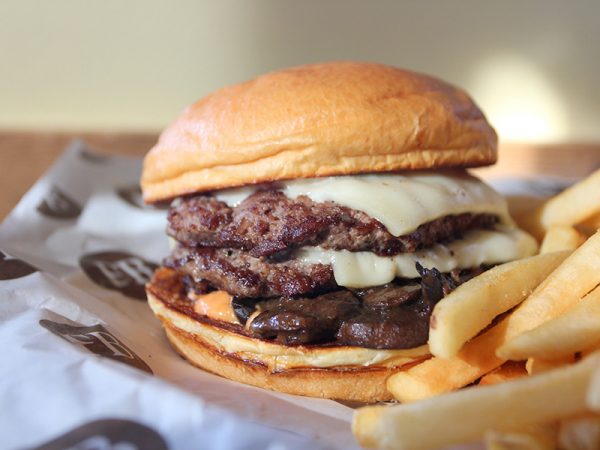 Audacious, Bodacious and Remarkable Burgers You Need to Add to Your Itinerary in 2018
Story, Photos and Video by Kat Robinson
The burger is the great American sandwich. It can be found in every state, with variations all over the place, but the premise usually remains common: red meat on a bun with or without condiments, vegetables or cheese. Lists of the greatest burgers of a region may be chosen in any fashion — sometimes by popular vote, other times by sheer luck of the draw.
I’ve been keeping up with good Arkansas burgers longer than I’ve been writing about food. Everyone has a favorite. In the past couple of years, many of those favorites have been lost — such as the excellent Rock Burger at Arkansas Burger Company, the splendid versions at Burger Mama’s, the Demolicious at Gail’s Diner, and of course, the beloved Hubcap at Cotham’s Mercantile.
If I were to share my entire list of favorites, it’d fill this magazine. There are so many different but good burgers in Arkansas that deserve celebrating. Limiting this list to 25 places was nearly impossible (especially when it comes to sister restaurants and separate locations). What you’ll find here are the best burgers I’ve found that are available right now in Arkansas. This list will probably surprise you.

1. The Bull Burger
Smokin’ Bull
Eight ounces of hand-patted and spiced beef, topped with a mound of cheese of your choice, melted into the patty, set onto a house-made bun (the jalapeno-cheddar is divine) with fresh lettuce, tomato and onion and with a sweet and spicy ridged pickle chip. Add on the Bull Jam, a special tangy sauce, and you have a two-handed, substantial, perfectly balanced burger you won’t ever forget.
306 South Elm Street
Emerson, Arkansas 71740
(870) 547-2020
Facebook.com/SmokinBullEmersonAR/

2. The Monkey Burger
Monkey Burger/It’s All About Makin’ It
An enormous, two-patty affair (the cook won’t tell you how much each patty weighs) perfectly seasoned with notes of onion, garlic and black pepper on a large bun with lettuce, tomato, white onion and hamburger dill pickles. I have yet to find a better burger in Pulaski County.
4424 Frazier Pike
Little Rock, Arkansas 72206
(501) 490-2222
www.loc8nearme.com/arkansas/little-rock/monkey-burger/4851681 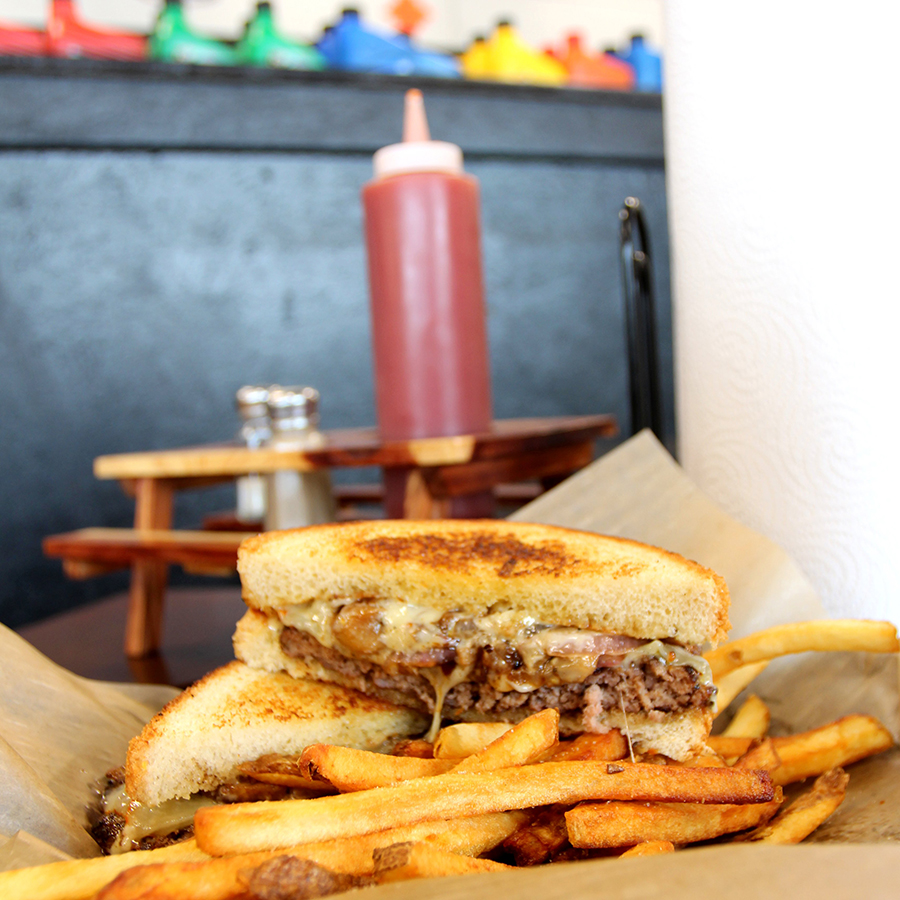 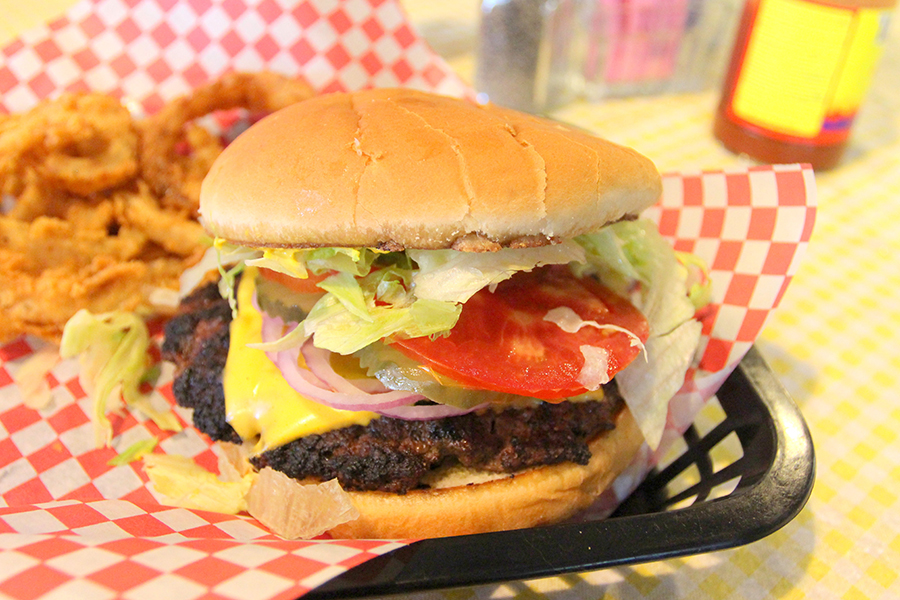 3. The Oark Melt and the Cheeseburger
The Oark Burger Company and the Oark General Store
These two separate restaurants are run by brothers — in this case, the Eiseles. The general store (the oldest such store in Arkansas) serves a crowd-pleasing cheeseburger that’s popular with visitors, especially the motorcycling crowd. The Burger Company, opened last year on the east side of Clarksville, offers the same good beef but in several variations. The perfect blend of grilled mushrooms and onions, Muenster cheese and Texas toast make the Oark Melt one of the more buttery and memorable burgers in the state right now.
Oark Burger Company
1100 East Main Street
Clarksville, Arkansas 72830
(479) 754-0092
Oark General Store
10360 County Road 5440
Oark, Arkansas 72852
(479) 292-3351
Oarkgeneralstore.com

4. Shroom Swissalaka
Feltner Brothers
The nephews of the man who opened Feltner’s Whatta-Burger in Russellville 50 years ago have made their own name as burger barons in Fayetteville. High-quality beef and a superlative grilled/smoked mushroom addition to this Swiss cheeseburger combine for a genuinely satisfying meal.
2768 North College Avenue
Fayetteville, Arkansas 72703
(479) 935-4545
FeltnerBrothers.com

7. Build-Your-Own, medium rare
Dugan’s Pub
Don Dugan’s marvelous burgers were key to the success of his previous venture, Markham Street Grill and Pub. With several years of grill patina, this burger now surpasses that standard. Cooked to order (yes, rare is an option), paired with provolone cheese and a sumptuous herb mayo, absolutely magnificent.
401 East 3rd Street
Little Rock, Arkansas 72201
DugansPubLR.com
8. The Ohio Burger
The Ohio Club
The spiciness in the eponymous burger at the state’s oldest bar doesn’t just come from hot mustard or jack cheese but from the spice hand-forced into each burger patty. The Ohio Burger comes on a specially made square ciabatta as soft as a potato roll with bacon, lettuce, tomato and a single fried onion ring.
336 Central Avenue
Hot Springs, Arkansas 71901
(501) 627-0702
TheOhioClub.com

9. Large Margo Beef with Cheese
Margo’s Catfish Diner
Just like the sort of burger you’d get if you were having dinner at your mom’s, except bigger. Make that your grandma, the one who has the patch of cucumber in the garden out back. The homemade bread-and-butter slices, fresh tomato, even the sesame seed bun add to the cooked-in-Mom’s-kitchen flavor about it.
807 Willow Street
North Little Rock, Arkansas 72114
(501) 372-3810

11. The Miss Anna and the Five Pound Giant Cheeseburger
Miss Anna’s on Towson and Ed Walker’s Drive-In
It’s hard to separate these two Fort Smith favorites. The sister operations utilize buns made from a tiny bakery out back of Ed Walker’s. The Miss Anna, with its ample bacon, cheddar and barbecue sauce on a seasoned patty on a seeded bun, is the local gold standard of burgers. But it’s often overlooked thanks to its gigantic counterpart, the largest burger in the state, a five-pound patty giant cheeseburger that takes 20 minutes to cool and is served sliced, family-style.
Miss Anna’s on Towson
5001 Towson Avenue
Fort Smith, Arkansas 72901
(479) 649-6300
Ed Walker’s Drive-In & Restaurant
1500 Towson Avenue
Fort Smith, Arkansas 72901
(479) 783-3352

12. Fat Boy
Greg And Jim’s Grocery & BBQ
This burger won’t win prizes for looks, but it’s sure worthy of notice for its sheer size and flavor. Three quarters of a pound of Angus beef with your cheese of choice, stacked in layers on an average-size bun makes this hot mess hard to handle. But the composition is right. You might have to unhinge your jaw.
4850 Old Military Road West
Colt, Arkansas 72326
(870) 633-0541

13. Double Cheeseburger
Bulldog Restaurant
The standard among Arkansas’ dairy bar burgers, the Bulldog’s burgers are griddle-fried smashies with just the right amount of salt and pepper and the perfect amount of juiciness. Paired with slices of American cheese, mayo and tomato, this burger is a moist and hearty handful.
3614 Highway 367 North
Bald Knob, Arkansas 72010
(501) 724-5195 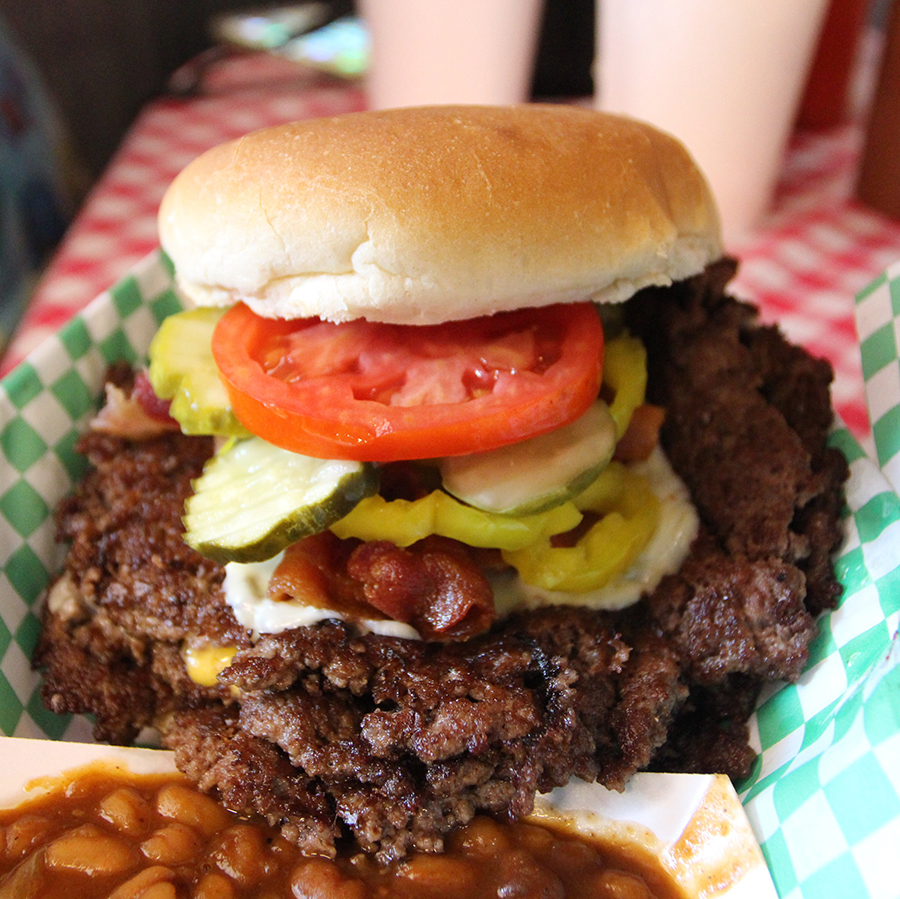 14. Blacksheep Burger
Blacksheep Joe’s Smokehouse and Grill
Three 1/3-pound beef patties smashed on the griddle and interspersed with three slices of cheese and three slices of bacon on an undersized bun with your choice of condiments from a bar. Banana peppers and plank refrigerator dill pickles alongside the joint’s Old Faithful barbecue sauce elevate this double-hander.
327 US Highway 62
Yellville, Arkansas 72687
(870) 449-5637

16. Chili Cheeseburger
Country Kitchen
The gold standard of chili cheeseburgers can’t be picked up and two-handed in polite company. The classic country diner’s outstanding chili, full of chunks of tomato and bell pepper, is poured over a hand-patted patty and then topped with finely shredded cheddar cheese right before serving. A guilty pleasure.
4322 Dollarway Road
Pine Bluff, Arkansas 71602
(870) 535-4767
CountryKitchenandBanquetBarn.com

17. #3 Combo (comes with drink and fries)
CJ’s Butcher Boy Burgers
The Bubbus family’s enterprises, including the quickly spreading David’s Burgers and Fort Smith’s Patrick’s Butcher Boy Burgers are all pretty good, but it’s the first of the Bubbus’ restaurants situated in a former Russellville Waffle House that has the best flavor in its patties, which are grilled from fresh-ground beef as you order. Grilled onions are the only upgrade you need.
2803 North Arkansas Avenue
Russellville, Arkansas 72802
(479) 968-2300

18. Where The Buffalo Roam
Tusk & Trotter American Brasserie
The only non-beef burger on the list, this bison burger made from Ratchford Farms’ buffalo is paired with a piquant aioli, grilled mushrooms and onions, bacon and a fried egg along with Swiss and cheddar cheeses. Get it with boiled peanuts.
110 Southeast A Street
Bentonville, Arkansas 72712
(479) 268-4494
TuskandTrotter.com

19. Bobby Burger
Bobby’s Café
The appearance of this hefty glistening burger with a pound of beef, and slices of bacon and cheese turns heads every time it’s ordered. The beast takes up a plate on its own, and its thick but smashed patty is light on spice but hearty.
18505 MacArthur Drive
North Little Rock, Arkansas 72118
(501) 851-7888 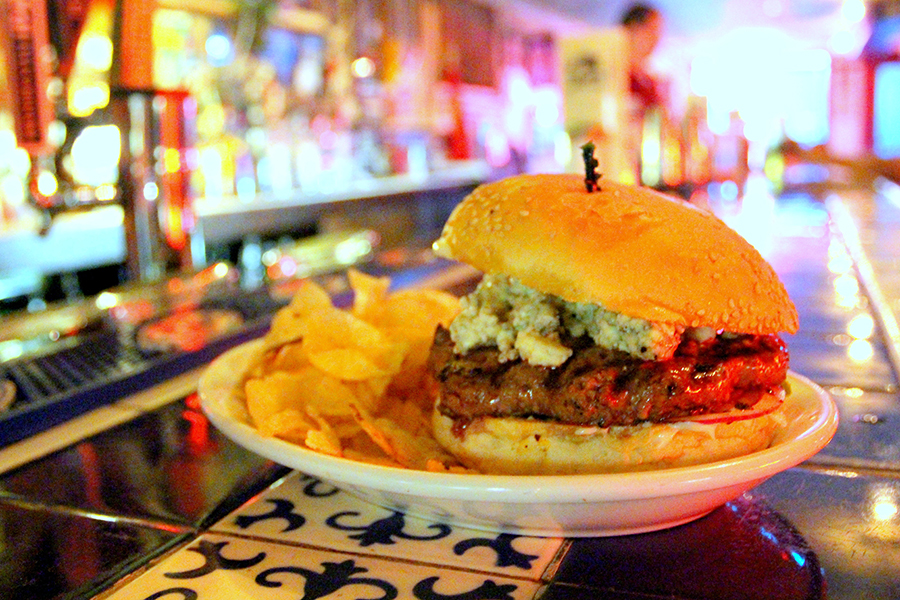 24. Excaliburger
Ozark Café
The colossus that inspired so many others (plus a popular Little Rock food truck), the original thick patty burger served between two grilled cheese sandwiches is still a standout on a menu that also includes a deep-fried burger and the Cheese Volcano, a burger patty topped with a mountain of shredded cheddar on the griddle, resulting in a Saturn-like ring of crusty fried cheese around the center.
107 East Court Street
Jasper, Arkansas 72641
(870) 446-2976
OzarkCafe.com

25. Double Cheeseburger
Red River Café
There’s nothing on the menu to indicate how audacious a simple double cheeseburger can be at this truck stop restaurant off Interstate 30 in south Arkansas. What comes to the table is a startling yet well-balanced flavor tower, served on a knife because no toothpick would be sturdy enough for such proportions.
5279 US Highway 67 West (I-30 Exit 18)
Fulton, Arkansas 71838
(870) 896-2590