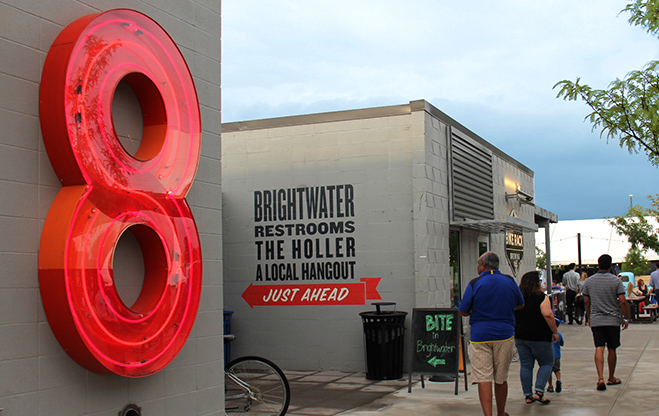 by Curtis Lanning
Bentonville, home of Walmart, has been growing steadily for years, from just over 12,000 in 1990 to nearly 50,000 as of 2016. And with a rapid influx of new people and cultures comes a desire for amenities like the arts and good food.
Crystal Bridges Museum of American Art falls into the arts and culture category, and when it comes to good food, Bentonville has several options, some of them thanks to an expansion of the 8th Street Market. The market also houses Brightwater: A Center for the Study of Food, part of Northwest Arkansas Community College and a cooking school offering academic programing and career training in the areas of artisanal food, culinary nutrition, food entrepreneurship and beverage management.
The 8th Street Market sits at 801 SE 8th St. and features Bike Rack Brewing Co., Yeyo’s Mexican Grill, chocolate makers Markham & Fitz, a Wednesday farmers market, plans for a local hangout called The Holler and much more.
Paul Esterer, president of Newmark Moses Tucker Partners in Northwest Arkansas, said the vision of the 8th Street Market includes objectives like anchoring southeast Bentonville development to areas like food and education and repurposing an industrial area to fit in with local and regional master plans.
“It really filled in a regional and master plan,” Esterer said. 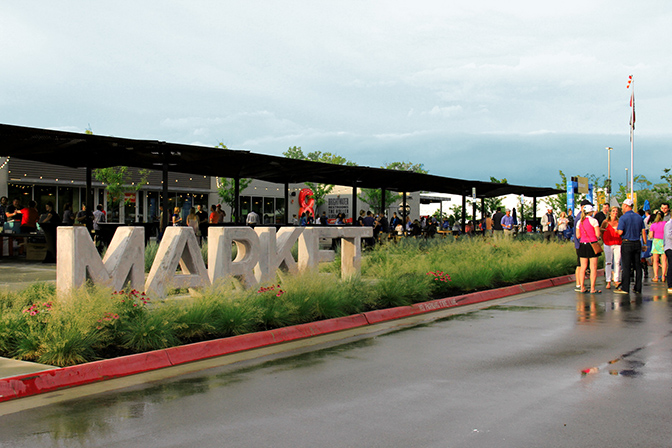 Esterer said the culinary development strategy launched around 2008, with plans to make the 8th Street Market a central food hub for Bentonville. Another goal was to reposition Brightwater as an asset in the epicenter of culinary arts.
Brenda Anderson is the director of real estate development for the property owner of the 8th Street Market. She said the 80,000 square foot property was purchased by Tyson, who later closed operations at the facility. Anderson said the property sat vacant before being purchased and turned into the 8th Street Market.
Other new businesses coming to the market include a ramen shop and a cheese store, officials said. They’ll join tenants that focus on collaborating for festivals and other events, according to Daniel Hintz, founder of Velocity Group.
“Good food is a collaborative endeavor,” Hintz said.
The 8th Street Market just finished hosting the fourth-annual food festival, BiteNWA. It brought hundreds of people to the market eager to try local food and drinks. Hintz said BiteNWA and the Farmers Market Under the Vine show the space is designed to be collaborative.
“[The] dynamic elements of campus will continue to grow,” Hintz said.
Esterer said more of the coming businesses should have their doors open in the next 30 days.
The 8th Street Market is a complex property in terms of architecture, programing and place in the downtown Bentonville master plan, according to Hintz.
When it comes to putting Bentonville on the national culinary radar, Hintz said 8th Street Market is helping to do just that with Brightwater. The cooking school is positioned to have an impact on the national level, according to Hintz.
Hintz said culinary industry professionals who have traveled to Brightwater were very impressed by everything they saw. They had overwhelmingly positive reviews, according to the Velocity Group founder. 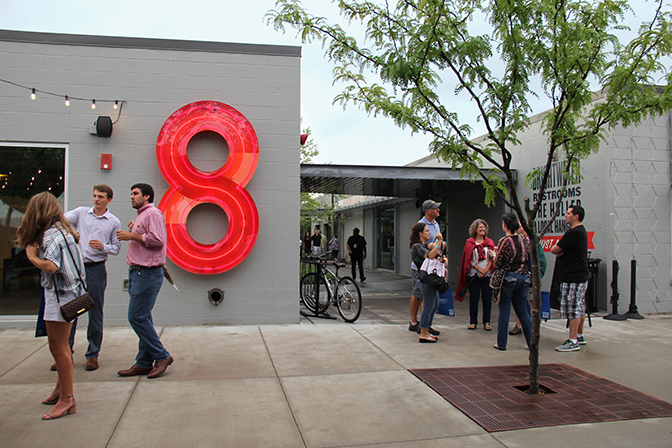 Bentonville’s increasing and diverse population is part of what’s driving places like the 8th Street Market, according to Esterer.
That population wants a “walkable, bikeable area” with diverse food offerings, Esterer said. Walmart and other businesses increase this population by hiring employees from around the country and even the world.
Crystal Bridges Museum of American Art and the 8th Street Market (among other amenities) were created, in part, because of people wanting access to the arts and good food, according to Esterer. And people who have lived in the area for years benefit by getting access to the exact same amenities in downtown Bentonville.
Hintz said Fayetteville, Springdale, Rogers and Bentonville all have plans to develop their downtown areas. It’s part of a regional strategy to manage smart population growth over the next 10-15 years. And the 8th Street Market? It’s part of that downtown development strategy in Bentonville.
For more information on everything the market offers, be sure to visit www.8stmarket.com.
Photos courtesy of 8th Street Market