9 Arkansas Caves to Explore this Summer 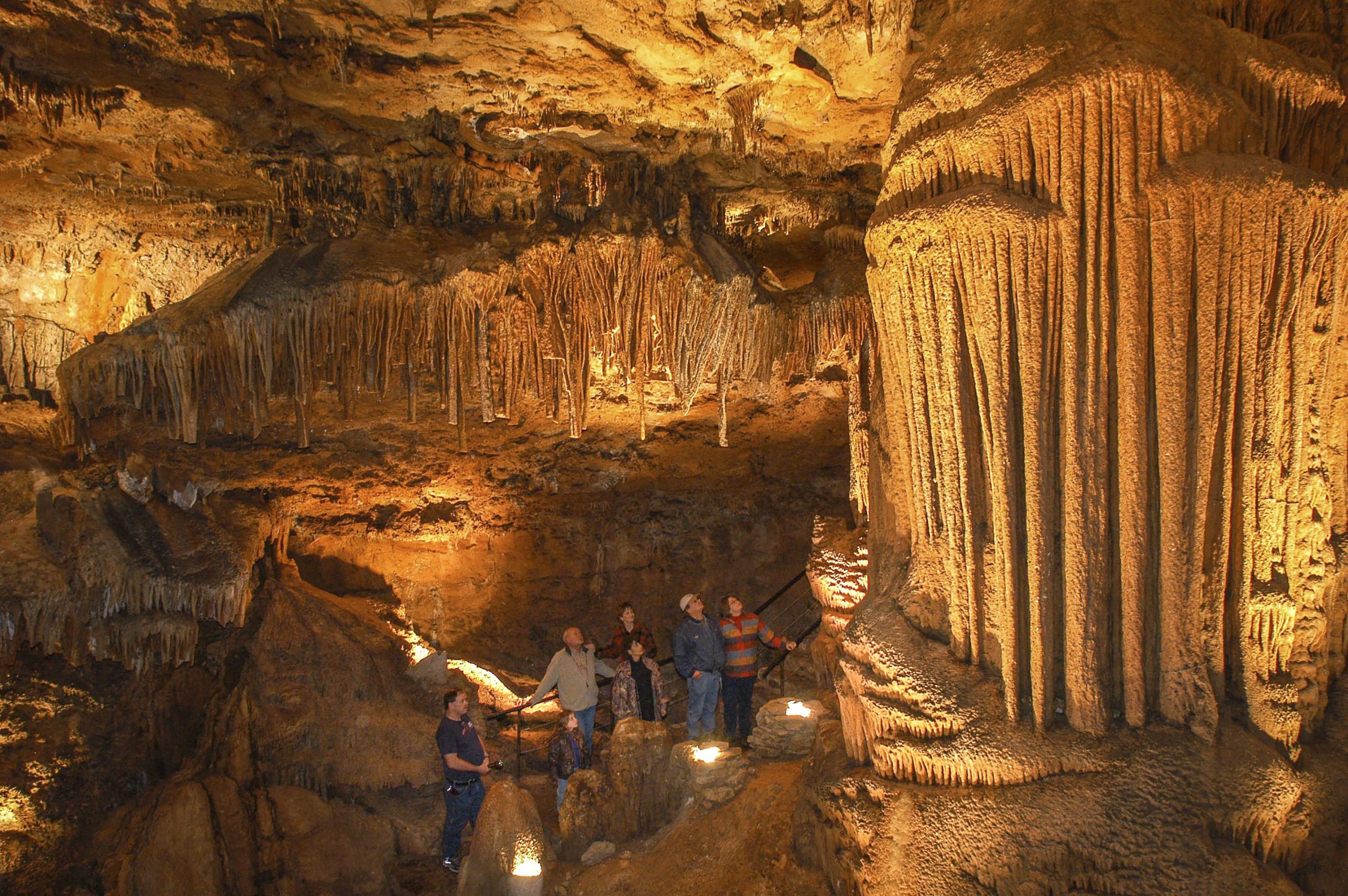 9 Arkansas Caves to Explore this Summer

Arkansas’ natural beauty can be seen both above or below ground, so don’t forget to check out our state’s underground attractions after you’re done soaking in all that sun on the hiking trails. With some locations such as Blanchard Springs closed due to the ongoing pandemic, here are nine other great Arkansas caves for hardcore spelunkers and casual observers alike. 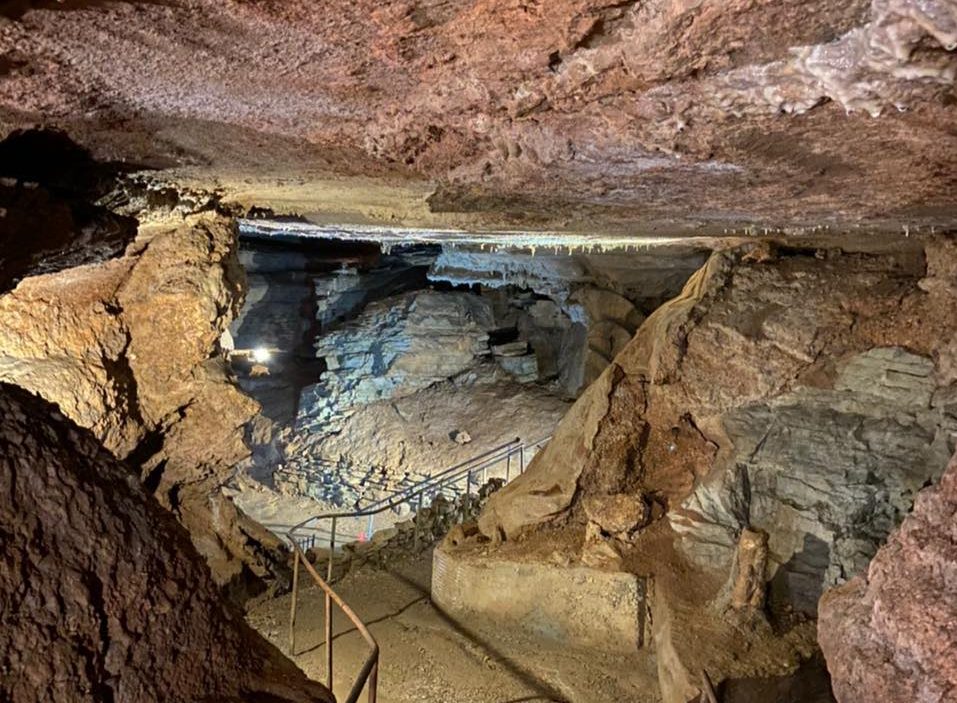 This cave is home to mysterious rumors of golden treasure, lost long ago by Spanish conquistadors exploring America. Visitors can tour the cavern itself and learn about why it is believed that this forgotten treasure still lies somewhere in these underground tunnels, pan for glittering gems and jewels, and even watch a movie on the cavern floor. 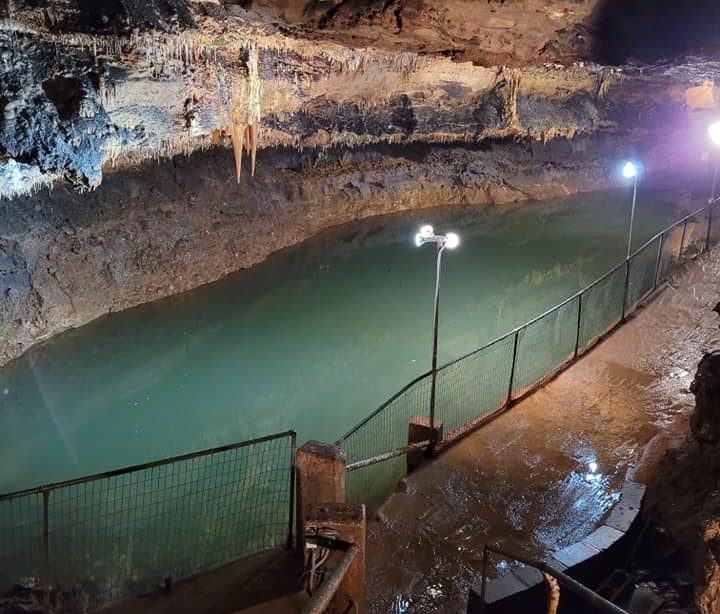 Cosmic Cavern’s name is well-earned, as stepping down into its depths is like venturing into another world. The cave is best known for two large lakes that go so deep into the earth’s surface that their boundaries have yet to be discovered, earning them the moniker of “the bottomless lakes.” For the more adventurous caver, Cosmic Cavern offers wild cave tours after normal hours, allowing for deep dives into the cave’s depths. 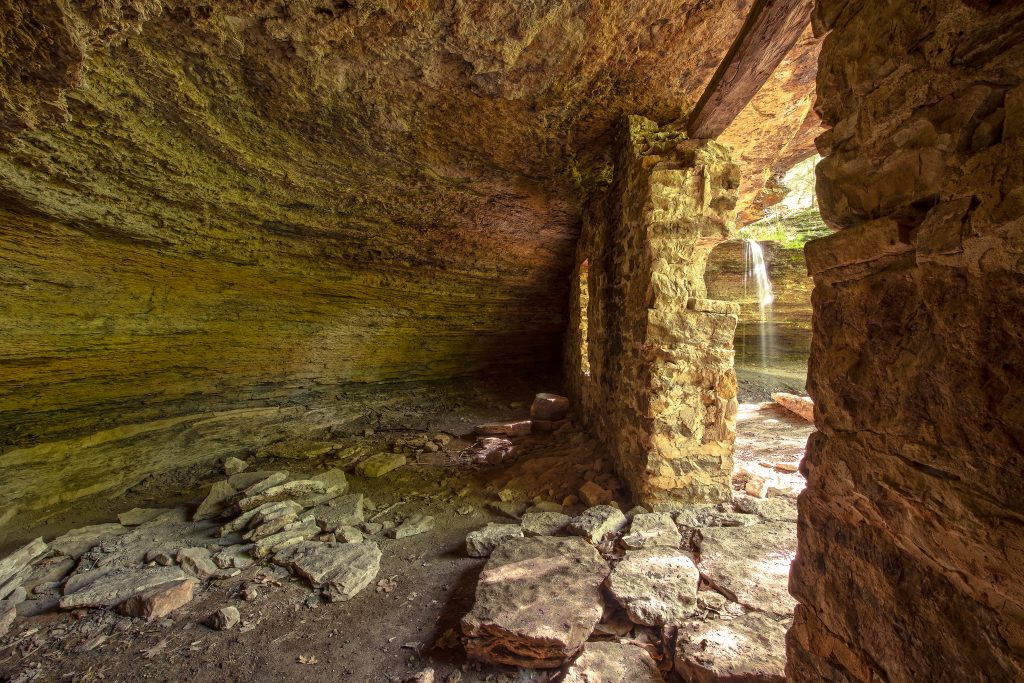 Unlike the other caves on this list, Moonshiner’s is manmade, cobbled together out of bricks and tucked away under a natural bluff. While it lacks the deep winding tunnels of some of the more mainstream caves, Moonshiner’s is surrounded by natural beauty, and may make for a more palatable cavern experience for those less comfortable with the enclosed spaces of the average cave. 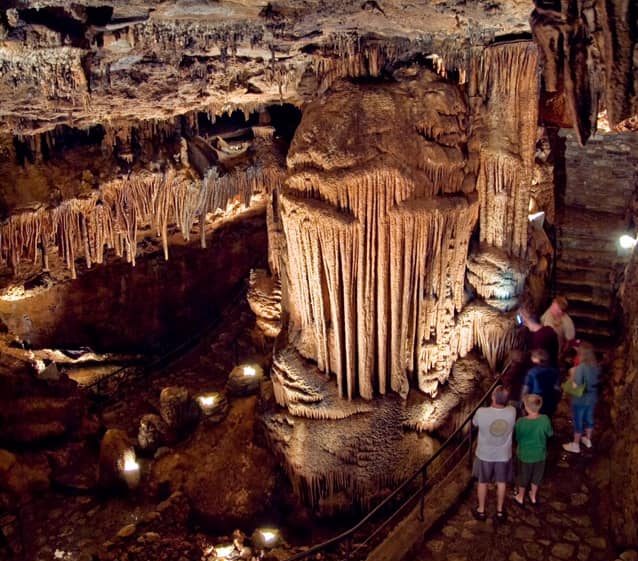 These two Arkansas caves are only 400 feet away from each other but offer separate sets of fantastic wonders you don’t want to miss. Schedule a day trip to see both at once, as Mystic Caverns features a stunning pipe organ calcite rock formation, and the Crystal Dome is home to a 70-foot-tall dome and a stunning bell-shaped collection of crystals, almost like an underground cathedral. Definitely a recipe for some underground fun. 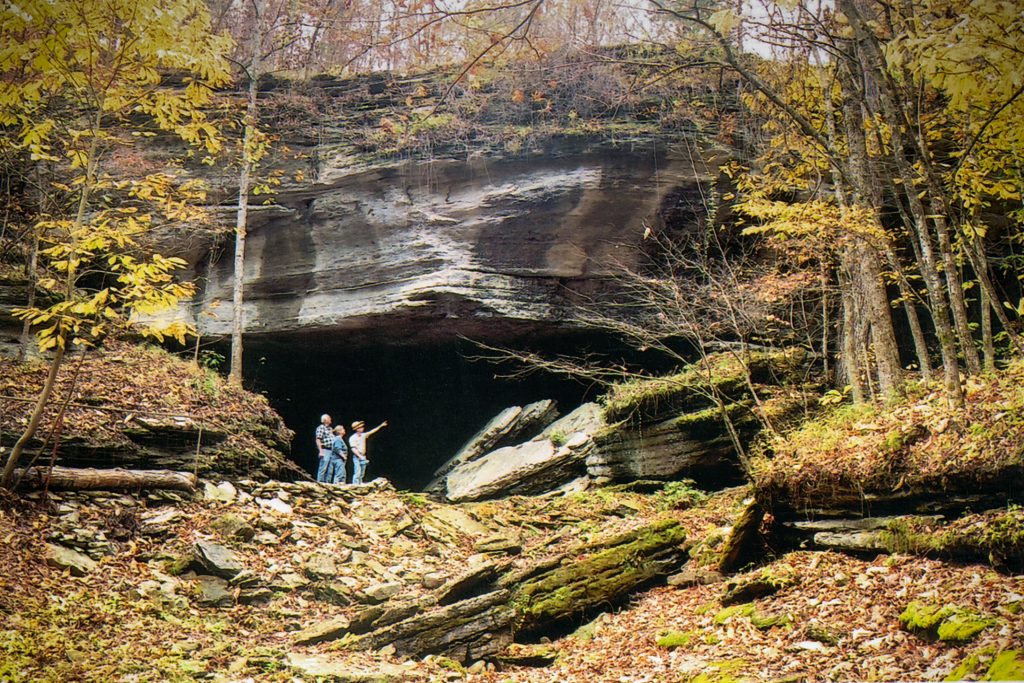 Another cave for avid spelunkers and casual cave-goers alike, War Eagle offers a simple, half-mile tour that is suitable for anyone, and an intensive three-hour deep dive into the twisting corridors of the cavern (requires reservations). This cave is located right next to Beaver Lake as well as plenty of above-ground hiking trails, allowing you to see something different each time you visit the War Eagle area. 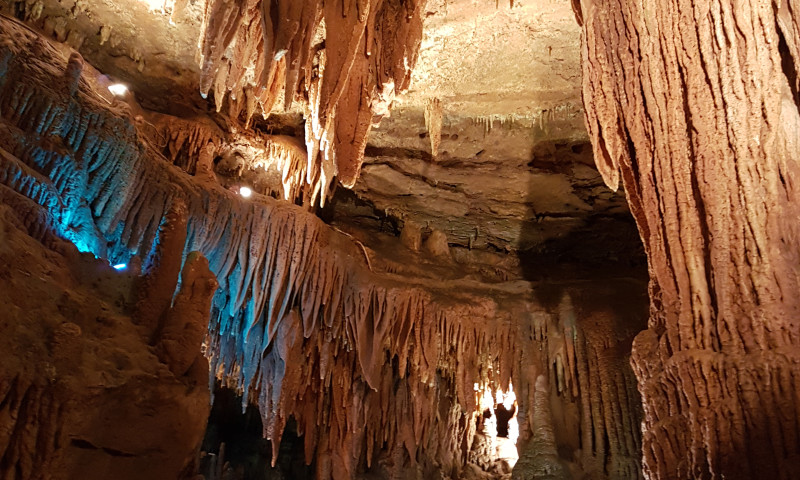 Ever thought about having your wedding in a cave? Maybe, maybe not. Regardless, you can do that at Bull Shoals Caverns if you’re so inclined, and the cavern even features a crystal altar that can be used in the ceremony. Besides the intriguing appeal of underground nuptials, Bull Shoals is home to a variety of almost otherworldly wildlife, such as salamanders, tiny pipistrelle bats and camel crickets, none of which you have to invite to your wedding if you don’t want to. 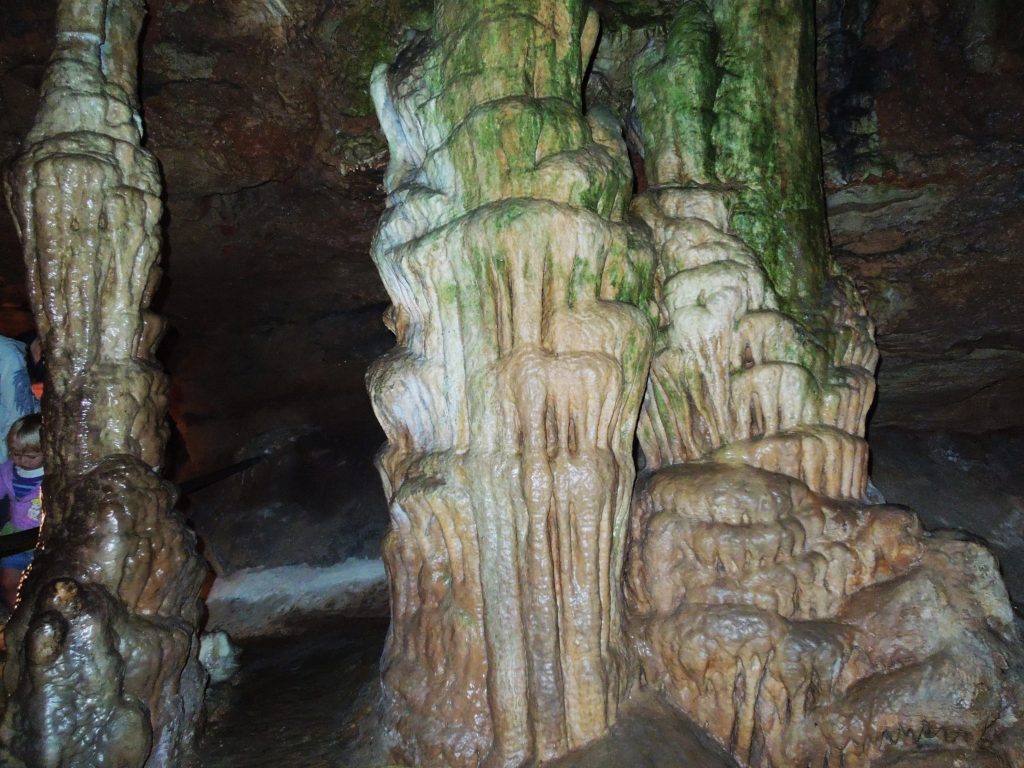 Onyx Cave Park features a variety of attractions, all centering around the Onyx Cave. Visitors will experience a simple walkthrough complex caverns with intricate rock formations, all while learning about the cave’s storied past, including the fascinating period of time in which it was utilized as a potential fallout shelter during the Cold War. 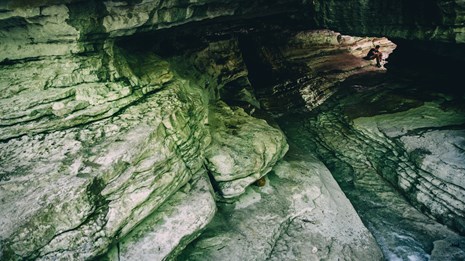 This cave, unlike many of the others featured on this list, does not offer any sort of guided tour. In fact, there are no artificial lights or paths inside at all, meaning you have to come prepared with caving equipment if you wish to see all this cavern has to offer. Reaching the cave requires a 200-foot crawl into the main room, which features an underground waterfall and plenty of room to explore. Helmets, gloves and kneepads are advised. 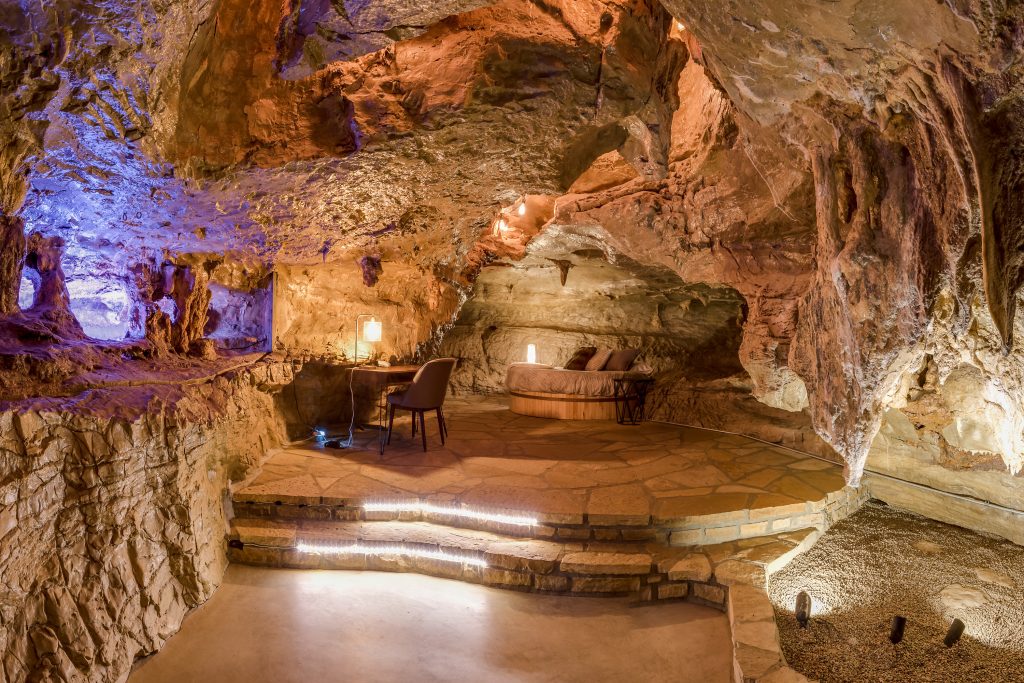 This isn’t really a cave you explore, it’s more so a cave you relax in. The Beckham Creek Cave Lodge is an upscale, 5,800 square feet vacation home built into a natural cave. The home has a full kitchen, four bedrooms, four bathrooms and even a helicopter pad. Make no mistake, it’s a little pricey to schedule a stay, but if you and a bunch of friends or family want an unforgettable vacation experience, this is the place to go.