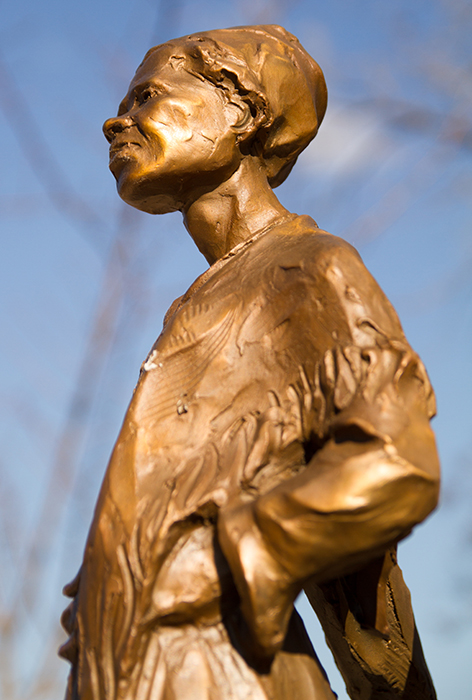 “This is the kind of work and important pieces we feel like the city should own and should have. It’s very educational.”

On the morning of October 10, 2019, a sculpture by Jane DeDecker titled “Every Word We Utter” was dedicated in the River Market’s Vogel Schwartz Sculpture Garden in celebration of the 100th anniverary of Arkansas’ ratification of the 19th Amendment.

Funded by donations raised by Sculpture at the River Market, Inc., the 5-foot model of DeDecker’s original sculpture features key figures of the women’s suffrage movement in Arkansas including Josephine Miller and Bernie Babcock. DeDecker’s original sculpture features Susan B. Anthony, Elizabeth Cady Stanton, Harriet Stanton Blatch, Alice Paul and Ida B. Wells. Arkansas is the first and presently the only state to recognize the centennial using a model of the DeDecker sculpture.

“[The Sculpture at the River Market committee] has been putting art in the city of Little Rock for 11 years now,” says Jane Rogers, chairwoman of the organization. “We got word from our contact person that lives in Loveland, Colo., that one of our artists [from whom] we have a good many pieces of work, Jane DeDecker, was sculpting a piece of beautiful artwork to commemorate women’s suffrage.” 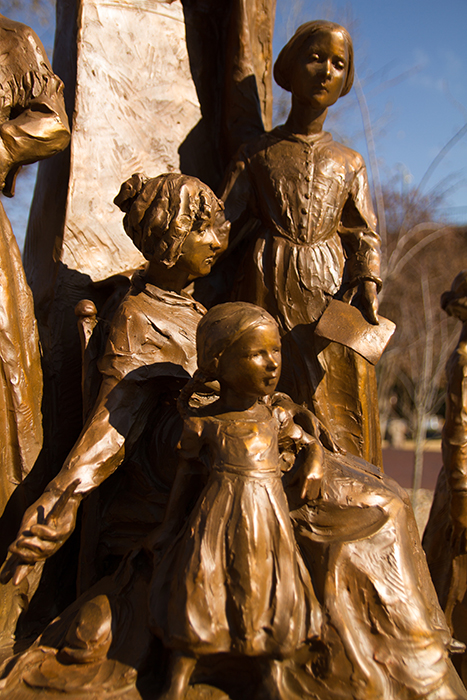 Rogers says they thought it would be a great idea for her to craft a smaller piece to be placed in Little Rock.

“We contacted her, and she was happy to do that,” Rogers says.

One hundred years earlier, on July 28, 1919, Arkansas became the 12th state in the nation to ratify the 19th Amendment, after the state legislature voted overwhelmingly in favor of the proposed amendment to the U.S. Constitution. A little over a year later, 36 states had ratified the amendment, making it officially illegal for the right to vote to be denied or abridged on the basis of sex.

While the famous Seneca Falls Convention of 1848 in New York and subsequent women’s marches would eventually lead to the drafting of the 19th Amendment a few decades later, Arkansas was also buzzing with hopeful, passionate women leading their own movements that propelled us toward that fateful day in 1919.

The women of Arkansas created the suffrage groups Arkansas Woman Suffrage Association (AWSA) and the Political Equality League (PEL). Though these groups only supported the white woman’s right to vote, African American women were fighting just as hard for voting rights of their own through organizations like the National Association for the Advancement of Colored People (NAACP). 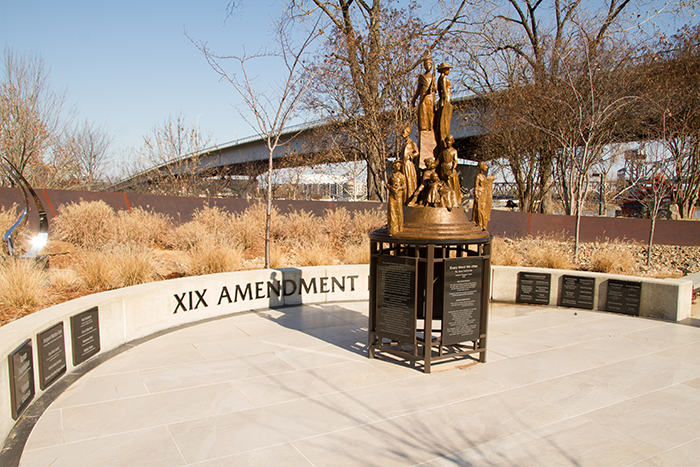 “The sculpture is on a stand, and around the bottom of the stand on four different sides it tells the story of women’s suffrage in Arkansas, and we envisioned schools and classes coming to the park to see that, and read about it and witness it.”

Some of the descendants of these original suffrage leaders were present at the 2019 dedication, including Megan DeLamar Schroeder.

Schroeder, an Arkansas native from a long line of strong women, was not surprised to find (through using an Ancestry.com family tree) that her great-great grandmother Mary Lucretia Dudley Spargo was a prominent women’s rights pioneer in Arkansas.

In April of 1912, a group of women called the Frances Willard Equal Suffrage Association, of which Spargo was the president, met at the courthouse in Hot Springs to push for the right to vote. The city’s newspaper at the time, the Hot Springs New Era, called them “the first organization of the kind in Arkansas” who wished to “promote the political equality of women, through the ballot.” The newspaper later reported in July of the same year that the group had begun calling themselves the Political Equality League of Hot Springs, and they had plans to join together to ask for suffrage at the next legislative session.

Schroeder says that, according to local source Stacy Sells, the “Hot Springs suffragists were pivotal in the passage of the bill in 1917 that was introduced by Representative John Riggs of that city and made Arkansas the first Southern state to approve women’s suffrage.”

After the bill was filed, the Hot Springs women went around the state to lobby for its passage.

“[Spargo] was not wealthy or particularly powerful, but she was strong in her convictions, and I think it just shows what grassroots organizing could do, even then,” Schroeder says.

A narrative from the web page for the UA Little Rock’s Arkansas Women’s Suffrage Centennial Project reads, “While the suffrage movement was often seen as an upper class hobby in the late nineteenth century, years of work by these activists had turned the tide by 1917. One newspaper at the time estimated that as many as 75 percent of Arkansas’s women supported female suffrage at the time that the bill was introduced. And despite the lack of an advocacy campaign in the legislature in advance to the bill’s introduction, the legislation still passed, making Arkansas the first Southern state to approve women’s suffrage.”

The DeDecker sculpture is the focal point of a plaza depicting some of those early national and local women involved in leading the movement. On the base of the sculpture, the names of over a dozen Arkansas women’s suffrage leaders who worked between 1869 and 1919 are inscribed, along with some of the history behind the push for equality.

“The sculpture is on a stand, and around the bottom of the stand on four different sides it tells the story of women’s suffrage in Arkansas, and we envisioned schools and classes coming to the park to see that, and read about it and witness it,” Rogers says. “This is the kind of work and important pieces we feel like the city should own and should have. It’s very educational.”

Schroeder was one of twelve of Spargo’s female descendants who came together to honor her by contributing to the sculpture project.

“Four of us [Schroeder, Nancy Spargo DeLamar, Elsie Parkinson and Stevie Spargo] dressed in suffragist white and carried her photo to the dedication,” Schroeder says. “We are so proud of our ancestor and her work, and we were thrilled to have an opportunity to recognize her 100 years later.”

But this isn’t the end of the road for the “Every Word We Utter” sculpture.

“The original piece [DeDecker] is working on, she hopes will go on the grounds of the United States Capitol in Washington, D.C.,” Rogers says.

Although the sculpture was offered to every state at one point, according to Rogers, the mass production has been stopped to focus on getting the original sculpture on the National Mall. Fortunately for Little Rock, its piece had already been commissioned.

Last October, DeDecker and her friend Jody Shadduck-McNally visited Washington to present their idea to the National Park Service and nearly 100 congressional offices, according to Westword, a local news and culture publication out of Denver, Colo. Two weeks later, a call from a staffer in then-Representative Jared Polis’ office led to the proposal of a bill to install the sculpture. However, the representative moved on to the Colorado governor’s office and the bill did not go anywhere, but all hope was not lost. 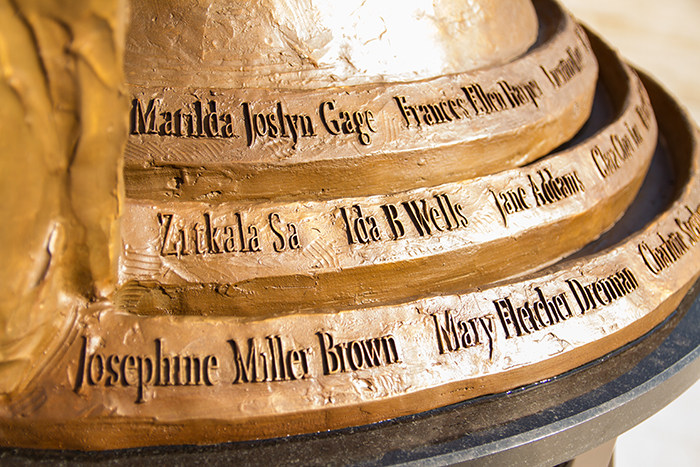 On January 10, 2019, the 100th anniversary of the day that the 19th Amendment was introduced in the House of Representatives, newly elected congressman Joe Neguse introduced a measure and helped the women get the entire Colorado delegation of representatives to co-sign onto the bill.

Shadduck-McNally told Westword that Neguse also “helped push for the hearing in the House subcommittee on May 22, 2019.”

A few short months later, on June 4, the 100th anniversary of the 19th Amendment passing through the U.S. Senate, Westword reported “Senators Michael Bennet and Cory Gardner introduced companion legislation in the Senate.”

The national monument’s exact location is still undetermined, but many supporters hope it will be placed near the National Woman’s Party Headquarters, the U.S. Supreme Court and the Hart Senate Office Building.