A Holiday Catalog For You And Yours

The holiday season is here, and with it, our kids will spend half the month free from their normal educational obligations. If you’re a parent desperate for some yuletide diversions to take up some of your Christmas creatures’ newfound free time, AY has you covered. We’ve made a list of the best holiday live shows, community events and family entertainment in Arkansas. From the seemingly-omnipresent productions of The Nutcracker Ballet and holiday lights shows to underground caroling and sensory-sensitive events for the differently-abled, AY has found something for every family to enjoy during this Christmas season.

The Arkansas Repertory is proud to present It’s a Wonderful Life: A Live Radio Play, showcasing the classic, uplifting tale of George Bailey’s self-discovery and redemption through a live radio reading. The Arkansas Rep will have 22 showings of the play, starting on December 3rd and running until the 29th.

The Arkansas Arts Center’s Children’s Theatre is putting on a production of A Christmas Carol, previewing the show on November 30 at 11 a.m. at the Hillary Rodham Clinton Children’s Library. Later, the play will show at the Arts Center’s Riverdale location on December 20, 21 and 22. Maintaining their commitment to artistic access, the Riverdale shows are pay-what-you-can with ticket sales starting on December 20 at 10 a.m., either in-person or via phone at (501) 372-4000. 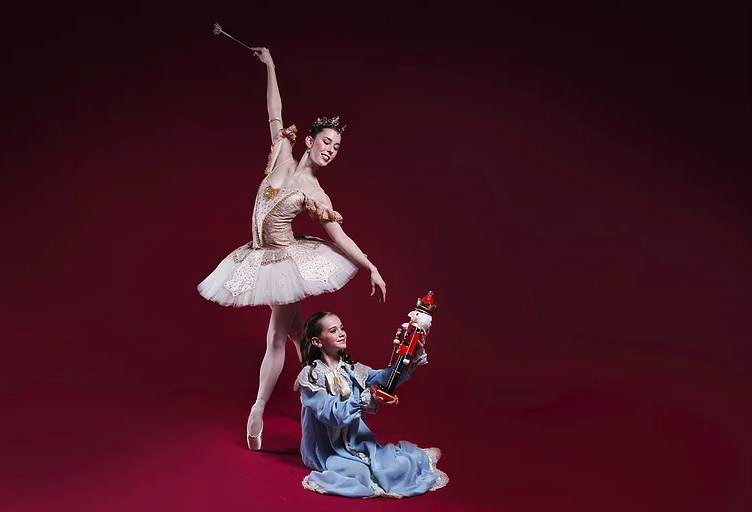 Showcasing the largest holiday production in Arkansas, Ballet Arkansas’ Nutcracker Spectacular features live music from the Arkansas Symphony Orchestra, multiple choral ensembles and over 250 local performers. The shows will take place on December 13, 14 and 15 at the Robinson Performance Hall.

Little Rock’s favorite downtown community theater will show a production of Elf the Musical, starting on Black Friday and running until December 15.

Centre on the Square

Centre on the Square

Searcy’s Centre on the Square will present The Best Christmas Pageant Ever, an adaptation of Barbara Robinson’s 1971 classic kids book. The Centre will run showings of the play from December 12 through December 22.

A lot is brewing at Arkansas Public Theatre’s home at the Victory. First, they’ll be hosting viewings of It’s a Wonderful Life and The Grinch on November 30 and December 7, respectively. Beginning December 13, the company will present A Tuna Christmas, an offbeat Christmas play, with shows running until December 22.

The Royal Players in Benton will show Miracle on 34th Street: The Musical December 5 through the 15th, sponsored by First Security Bank.

The Red Curtain has two holiday shows this season, the first, Sanders Family Christmas, started in November, and featured 25 southern gospel Christmas favorites and humorous stories. Then, they’ll present its version of A Christmas Carol: The Musical December 13-22.

The Foundation of Arts

Get an early start on the Christmas season November 22-26 when the Jonesboro Foundation of Arts (FOA) shows its annual presentation of The Nutcracker Ballet with dozens of actors and actresses local to northeast Arkansas. Later, mark your calendars for December 13-16, when the FOA will present a family concert featuring dozens of holiday favorites. 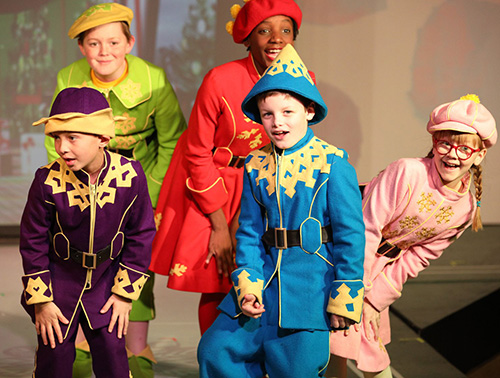 If you’re in the mood this holiday season for a show and a hot, delicious meal, Murry’s Dinner Playhouse will show Annie from November 20 to December 31. 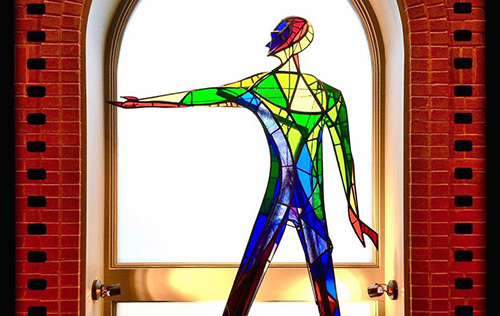 Arkansas’ oldest running volunteer community theater isn’t sitting out this holiday season and will present The Best Christmas Pageant Ever December 5-7 with all of the mayhem and fun of the best-selling young adult book.

The NWA Regional Dance Co. will perform The Nutcracker Ballet on December 8 and 9 at 7 p.m. 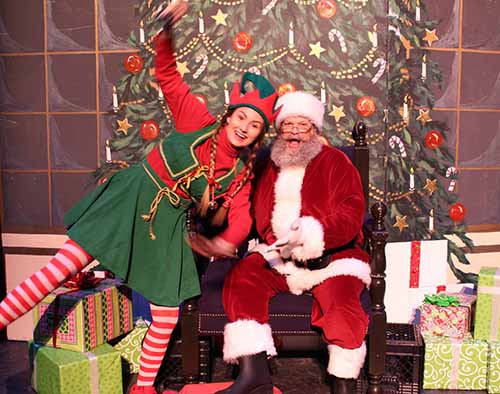 Arts Center of the Ozarks

Arts Center of the Ozarks

This mountainous arts collective has two yuletide shows, first showing The Best Christmas Pageant Ever on December 13, 14 and 15, then going on to present Miracle on 34th Street the week of Christmas, December 20, 21 and 23.

Fayetteville’s own community theatre will premiere Amy Herzberg’s stage adaptation of A Christmas Carol for a full month from November 20 through December 22. 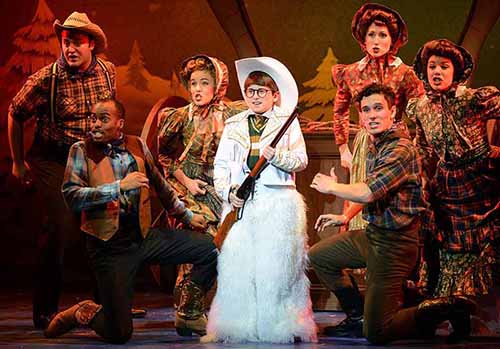 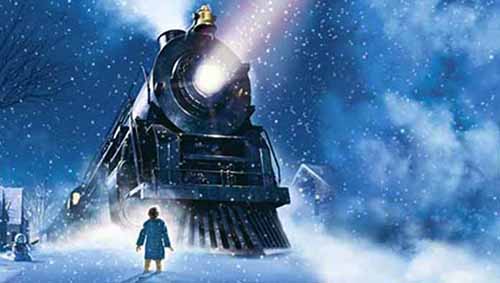 Another Northwest Arkansas organization has several holiday shows in the chamber. The Walton Arts Center will show A Christmas Story: The Musical from December 10 to 15, then it will host Robert Earl Keen and Shinyrib’s Countdown to Christmas on December 17.

Robinson Performance Hall will have one showing of Rudolph the Red-Nosed Reindeer: The Musical on December 3 at 6:30 p.m. 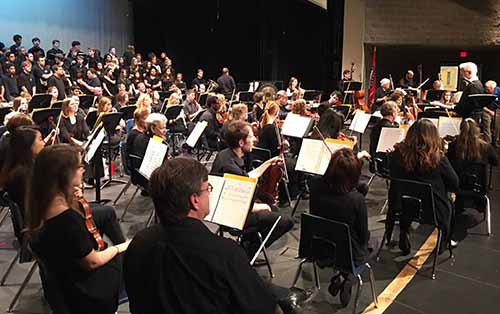 For those with more classical inclinations, the Arend Arts Center will present Christmas with the Arkansas Philharmonic Orchestra on December 15 and 16.

North Little Rock’s Argenta Theater will present its third annual performance of A Christmas Carol, running from December 4 to 14. Despite only being in its third year, this play showcases the talent of an all-new cast of local youth and adult actors, who will bring Charles Dickens’ classic tale of redemption and reconciliation to central Arkansas audiences.

This Central Arkansas Library System movie theater will show holiday classics throughout the season. Starting on December 3 is BingoFlix with Santa Claus Conquers the Martians, where viewers can play bingo with bad movie cliches to win tickets to the theater’s future Christmas movie screenings, including Elf on December 10, Die Hard on December 12, National Lampoon’s Christmas Vacation on December 17, and It’s a Wonderful Life on December 19. All showings start at 7 p.m. Admission is $5.

The Movie Tavern will have a weekly rotating lineup of three Christmas movies, starting on December 2 and running until Christmas Eve. Among the films to be featured are Grinch, Elf, White Christmas, The Polar Express and National Lampoon’s Christmas Vacation, among many others.

Rogers’ downtown performing arts center will have a matinee of Elf on December 8 at 2 p.m.

Aside from its extensive lineup of live performances, the Walton Arts Center will also show The Polar Express on December 23 in the Baum Walker Auditorium.

Yuletide Attractions at Museums and Libraries 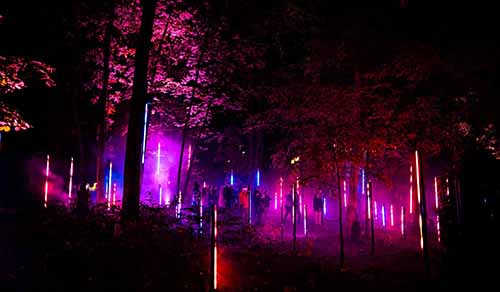 Arkansas’ premier art museum opens this merry season on December 15 with a Family Sunday featuring holiday-themed live performances from communities around Northwest Arkansas. Then, starting on December 21, Crystal Bridges will provide a fun, artistic experience five afternoons a week with Winter Break Wonders. Your kids can make fun crafts, take in the holiday-themed culture and enjoy live performances while giving you an almost-daily break to deal with other holiday stresses.

The Dino Lites return to Hot Springs this year, where families can take a walk through the dinosaur exhibits and see how their local community groups have decorated the ancient beasts in tinsel and lights. The Oaklawn DinoTrek’s Dino Lites are open every Friday and Saturday from November 29 to December 28. 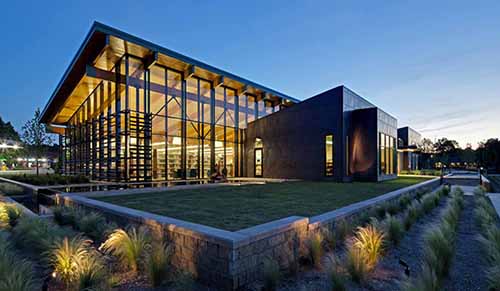 The CALS Rooker library in Otter Creek is your go-to for fun holiday activities in Little Rock. On December 7, teens at the library can craft Pinterest-inspired ornaments, and on December 16, people of all ages can come in from the cold to enjoy a hot cocoa bar and Christmas cookie decorating.

This December, the ASC in Pine Bluff is leaning into the arts portion of its name; from December 12-15, it is presenting A Christmas Story: The Play, and before Saturday’s show ASC will hold a Family Funday centered around making an A Christmas Story-inspired ornament to take home after the play ends.

Holidays on the Bricks

Hit the steps with your little ones at downtown Rogers’ 4th-annual Holidays on the Bricks, starting December 7th with school and church choirs caroling on the streets, accompanied with cocoa and candy canes. The festivities also provide ample opportunities for Santa sightings; on December 7 and 8 your kids can snap a picture with the Big Man himself, and possibly whisper their Christmas wish in his ear and/or slip a $20 in his hand, depending on your child’s boldness.

On December 8, community voices from all around Northwest Arkansas will gather at Bella Vista Lutheran Church to join together in singing the various movements of Handel’s Messiah. People of all ages, races, creeds and singing aptitudes are welcome, rehearsals will take place on the two Saturdays preceding the performance. 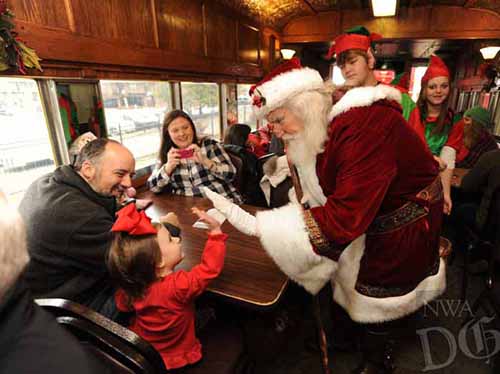 Starting on November 30 and running until December 23, the Arkansas & Missouri Railroad will run the rails with Holiday Express and Children’s Christmas Train rides, having round-trips and hour-long rides departing from their Springdale and Van Buren stations. Kids aboard can have fun with Santa and friends, singing Christmas songs and drinking hot chocolate. 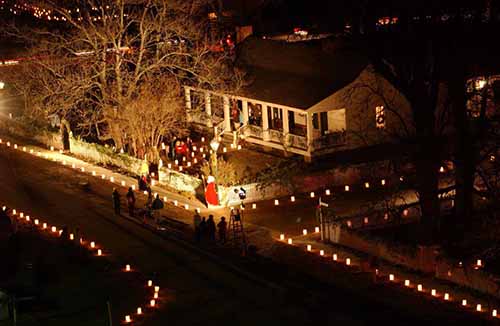 Since 1987, families have delighted at strolling through the candlelit streets of Historic Washington State Park’s village with walking tours and carriage rides. If your young ones get hungry on the walk, pop into Williams’ Tavern and help yourselves to a buffet with traditional Christmas foods. Washington’s Christmas and Candlelight runs all day on December 8.

Christmas is a joyful time for all people, regardless of their faculties or needs, but for some people with special needs, the loud, bustling holiday crowds can be a little too stressful. At Little Rock’s Park Plaza, Rogers’ Central Mall and Jonesboro’s Turtle Creek Malls, Santa Cares invites people within every spectrum of special needs to come with their families to a private photo session with Santa on December 8 at both locations.

Caroling in the Caverns

The joyful strains of this holiday season can be heard even in the deep darkness of Blanchard Springs, where every weekend from November 29 to December 22, you’ll be able to take your tot to gaze at the magnificent beauty of the caves and hear the resounding notes of Christmas carols performed by live musicians.