A Home Down by the River

[dropcap]I[/dropcap]t would be easy enough to believe from the inside that the front door of Regina and Mat Seelinger’s home leads directly to the beach. It has the serene, breezy feel typically only found on the waterfront.

They moved to their new home in Rockwater Village about a year and a half ago, and Regina enjoys sitting on the patio next to the outdoor grill and watching cyclists zoom by, many of whom stop to visit before continuing on their way.

“I do enjoy that,” she says. “If I don’t want to talk or if I don’t really want people to see me I can go outside on the deck upstairs, but I really usually do like to see people.” 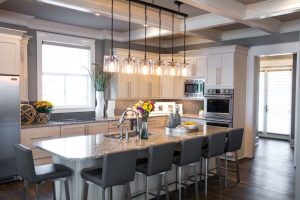 The kitchen has a contemporary bar along with having a clean and sophisticated look.

She has found herself on the bicycle trail even more often than usual since the couple arrived in Rockwater Village.

“I enjoy taking my grandkids. I have a trailer that I take them in. But I’ve definitely ridden more since we moved here,” she says. “And I got a bike with a motor.”

The dining area has unique fish decor and an abstract rope chandelier.

When she’s inside, she spends most of her time in the open living space on the first floor. Like most of the house, it is decorated in soothing neutrals, with myriad textures and bright splashes of color.

The Seelingers moved from the Overbrook subdivision of North Little Rock, where they had lived for more than 30 years. They had planned to have an estate sale when they moved out so they could start with a fresh slate in their new home, but that turned out to be unnecessary. The people who bought their home had been long time apartment dwellers and asked that their furniture be included in the deal.

“Furniture, linens, lamps, rugs, bedspreads, everything,” she says. “I took pictures out of frames and left the frames for them. The furniture was a more traditional style and the colors were darker so it just wouldn’t have fit well in here.”

Regina went to Howse, in Little Rock’s Pleasant Ridge Town Center, for help in getting the look she wanted, from the dark metal chandeliers to the plush rugs on all three levels of the house. She had resisted moving for a while.

“I liked our house,” she says.

But she told her husband she would make the move to Rockwater, which they had seen and heard about before the development several years ago. Mat was initially nonplussed about being in the thrall of urban renewal, but after hearing a presentation from Rockwater’s planners he got on board, she says. 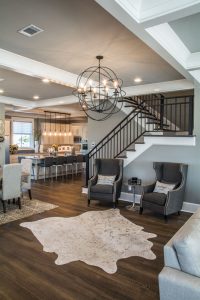 The lighting displayed throughout the home is unique and chic.

Rockwater Village is a 50-acre development built on what was once Vestal Nursery, where roses and other flowers were grown. The old chimney that heated the nursery’s greenhouse still stands in Rockwater Village, in the middle of a roundabout. There is a marina in the neighborhood, which is close to Dickey Stephens Park and Verizon Arena as well as Riverfront Park, and several restaurants and stores. The neighborhood was recognized by Southern Living magazine, which dubbed it a Southern Living Inspired Community.

Regina knew exactly the kind of house she wanted when the lot was bought and she initially called an architect in South Carolina whose houses she saw on the internet. Then she found her way to Chad Young, an architect with Wittenberg Deloney and Davidson in Little Rock.

“This is an odd-shaped, very small lot, hence all the ins and outs and all the features on the house,” says builder Jon Callahan of Jon Callahan Construction. “Literally, it started with a footprint and they wanted living and stuff downstairs, bedrooms on the middle floor and then there’s a third floor up there. The house actually has a bunch of zigzags in and out on the outside because that’s where it hit the property line. It touches every property line that we could touch.”

Upstairs, for instance, there is a game closet in the room designed for the Seelingers’ grandchildren – four girls under the age of 3, with another one expected soon. The closet was a convenient use of space behind the master shower. 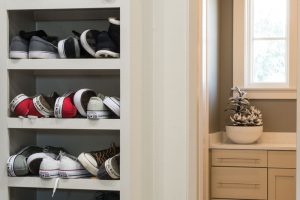 A collection of Converse in a small closet space. 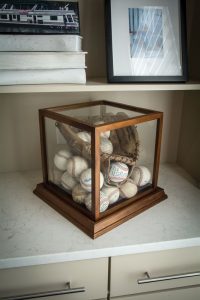 Signed baseballs and a baseball glove in a display box add personality to the room.

There are floating bunk beds in that room, suspended from the ceiling so that no pillar or pole will obstruct the girls’ view of the mounted flat screen television. Callahan fabricated reading lights for the walls adjacent to the lower beds. Regina’s friend painted bright yellow vertical stripes on the walls and scriptures over the windows. The Bible verses were ones her grandmother chose for the cover of an autobiography she wrote before she died last year at age 100.

Regina and her husband rarely ventured upstairs in their old house. That’s where the bedrooms and game room used by their three now-grown sons were located. In Rockwater Village, however, they climb the staircases in the middle of their home regularly, to the master suite, the guest room and Jack-and-Jill bath and the grandchildren’s nursery on the second floor and asunroom/observatory, complete with a bar and pub-style table and outfitted with a telescope from Restoration Hardware, on the third.

Callahan made sure the home was fully encapsulated, meaning that insulation is so complete that even on hot days, the interior stays cool. He also took extra care to make sure that the decks on the upper two levels that hang over living space will not lead to leaks.

“It’s got commercial roofing over all these areas to keep them dry because its outdoor areas over heated and cooled space,” says Callahan.

Regina enjoys cooking, and has plenty of food preparation room in her kitchen, with quartz countertops and Thermador induction oven. She can even listen to Judge Judy while making dinner. 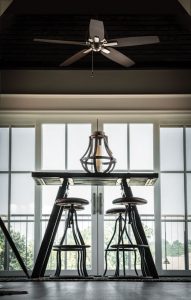 The rustic sitting area is framed with large windows that provide natural light.

“I don’t ever just sit and watch TV, and it would have to be turned up pretty loud for me to hear it in the kitchen – too loud for someone sitting in front of it on the couch – but with the speakers in the kitchen I can listen, and I can see the TV from in there, too,” she says. “If my family is here and I’m cooking I can still feel like I’m part of things.”

The living area – which she told Young she wanted to be as large as he could make it – has a soft gray chaise longue that shesays is the best napping couch ever. The sofa sits along one wall with a long window seat perfect for sitting on to gaze out at the water and for storing her grandchildren’s toys along another. A roomy coat closet on the other side of the room can be used to accommodate an elevator that goes from garage to second story, should they ever opt to have one installed.

If Regina thought she would miss anything about her old house, it was the three-car garage. There wasn’t space in the plans for a three-car garage in Rockwater, but there was a plan, nonetheless.

”We had a lift installed in our garage so we can stack two cars on top of each other. And we have a lot of bike storage,” she says, gesturing to the red Ferrari elevated in that space on a recent day.

Any reservation the Seelingers had about moving has faded away. Living near the Rockwater Marina and on the bike trail in the house Regina imagined in her mind’s eye before its foundation was laid has worked out well. 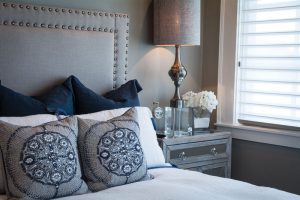