A Hunting I Will Go: Moments and Memories 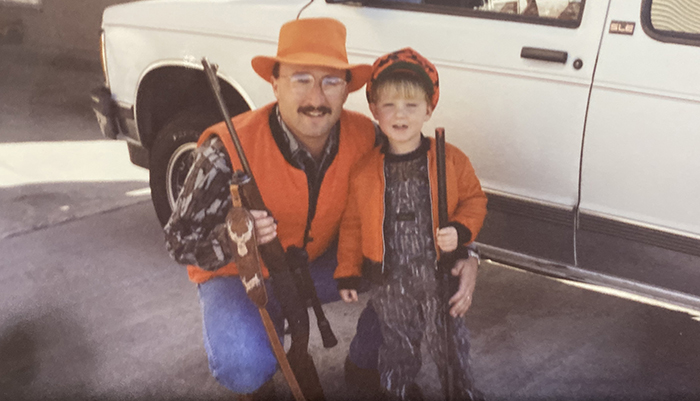 I have early memories of hunting with my father – putting on bright orange vests over our camouflage (which always seemed counterproductive), sitting on the cold, metal deer stand in the early morning, maybe not being so patient or quiet as my father would have liked, and occasionally seeing deer, but never managing to actually shoot one. On one of my earliest hunts, I did take great pleasure in bringing my BB gun and putting holes in the leaves of various plants.

I sometimes felt badly that we never shot anything, but I only much later realized that my father almost certainly did not take me out hunting with the expectation that I would increase our odds of success. If anything, I probably made enough noise to scare off any deer in the area. Rather, he took me hunting because it was something he wanted to share with me — a journey for its own sake, with no regret if we failed to reach the stated destination.

Tony Frizzell, author of children’s book “A Hunting I Will Go,” realized that a lot sooner than I did. As passionate as he is for the sport of hunting, his first published work emphasizes, above all, the value of hunting as a shared experience that creates lasting memories, a value which has greatly enriched his own life.

Originally from England, Arkansas, Frizzell now lives in Maumelle with his wife, Cindy, and has worked a day job as a sales manager at Bruce Oakley Fertilizer for 29 years. He has been an avid deer and duck hunter ever since he first went out with his father at the age of 5, carrying a pop gun. When he was 6 or 7, he killed his first duck, and his first buck when he was 13.

“I was just raised in it,” Frizzell said. “I was born in November, and that’s usually when duck hunting started, so my birthday present was always to get checked out of school early on Friday and spend the weekend [hunting].”

Through the experiences and time spent hunting, he became very close to his father and grew to appreciate the beauty and quiet of nature.

“I think, if I look back, there are really three stages of hunting,” Frizzell explained. “The first is when you start hunting. All you think about is the kill, gotta kill the ducks, kill the deer, and that’s all you think about. As you get older, it’s not the kill that’s important, it’s about who you’re going with, the fun that you have with your friends and your family.”

The third stage, which he realized after his father passed away, is that “Today’s a gift, and you never know what tomorrow will bring. So what you have is just the memories that you make, and I’ve got a world of memories with my family and especially my father and son once he was able to start hunting. It’s about the fellowship and the memories that you can take with you.” 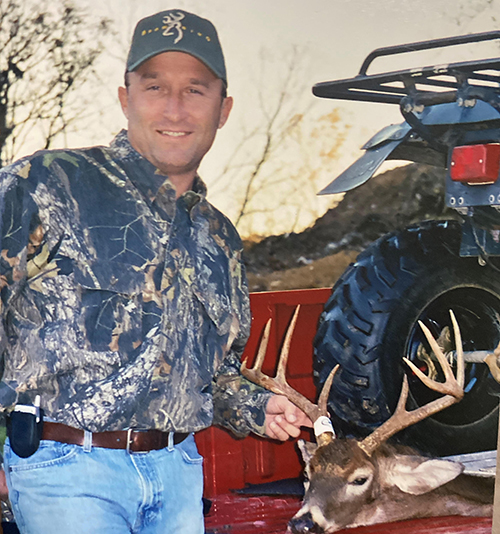 Tony Frizzell smiles next to a deer after a hunting trip.

Indeed, he has hunting stories aplenty, such as when he and his father saw a buck while hunting with muzzleloaders. Frizzell pulled the trigger … and the gun didn’t fire. The deer simply stood there as he tried to fire again, but no luck. Finally they took the gun apart and got it working again, all while the deer politely waited for them to fix the problem and shoot it. All of his stories are tied to family members in some way, from taking his daughter out to hunt, to seeing his son, Anthony’s, excitement upon killing his first 8-point buck, to duck hunting with his father and grandfather, where his grandfather would never shoot but always claimed credit for shooting the ducks.

More than anyone else, his stories are about his father. He recounted a time when he was meant to meet with his father at a certain place in the woods, but his father didn’t arrive. Frizzell went looking for him, and found him limping along with a broken ankle; even aside from the memories made, it’s a very good thing that Frizzell was there to help. He was also there for the last buck his father ever killed. It was a long-distance shot, and the deer fell right in its tracks, leading his father to excitedly says, “That’s the way you do it!” Because he was there, that memory lives on. Another line his mother would tell him is: “Enjoy the hunt. Cherish the memory!” 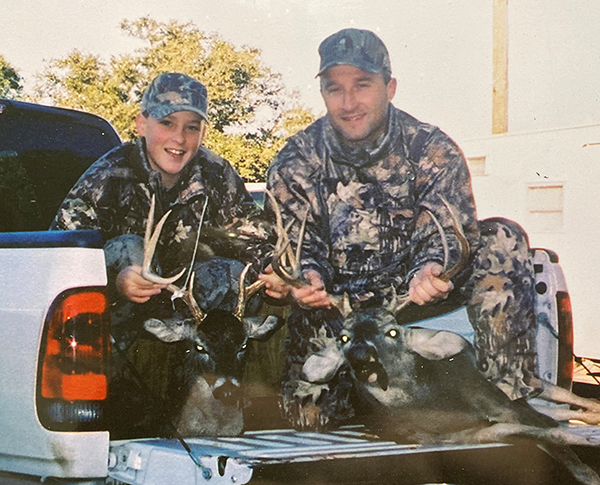 Father and son after a successful day hunting.

“My daddy and I spent a lot of time talking about things because we were together that we didn’t have time to during the week,” he said. “We would have a lot of time to sit out there, and I would run things by him, share things and problems I might be having, and get a lot of advice from him on certain things.”

Writing has not been the lifelong passion for Frizzell that hunting has. Prior to writing “A Hunting I Will Go,” he had no professional writing experience, and hadn’t done much in the way of writing since his days of college papers. What he did write were riddles, short rhymes that he would use to go the extra mile when doing something like signing a birthday card or something of the sort for a family member.

He wrote one such rhyme while watching his grandson, Judson, play on the floor, recalling memories of hunting with his own father and son and looking forward to a future of quality time spent together in the woods. When he showed it to his family, they suggested that he turn it into a book. He had noticed that there were very few children’s books about hunting, and wanted his work to show people that hunting is really about cherishing the memories you gain.

Frizzell is not a long-winded man, and to hear him tell it, the publishing process almost sounds simple. He looked around the internet to find a publisher and was picked up by Dorrance Publishing Co. From there, it was a string of meetings and emails with the publisher and the illustrator, approving or rejecting changes, a process that took over a year, thanks to the pandemic. 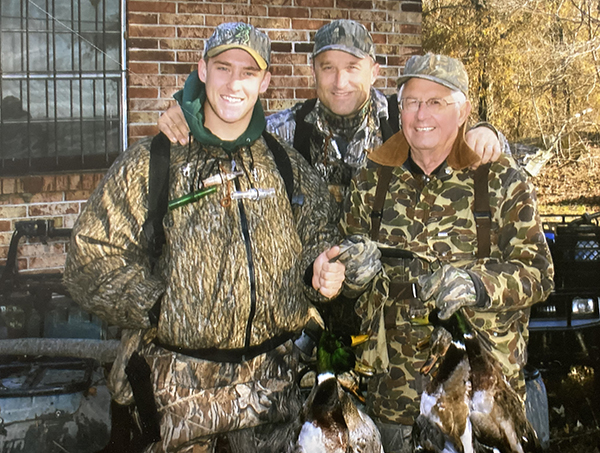 (From left) Tony Frizzell’s son, Tony and his father pose next to each other after a hunting trip.

The end result is a brief but delightful children’s book with charming illustrations full of warm autumn colors and a lesson that is surprisingly rich in meaning. The narrator and main character of the story is an unnamed young boy who is looking forward, much as Frizzell did, at the sight of his grandson – immediately tying hunting to family bonds. The first two lines read: “When I grow up, I will get to hunt too! Just like my dad gets to do.”

The boy imagines the thrill of a successful hunt, of course, but just as prominent in his daydreaming is time spent with his father and in nature. Attention is given to the preparation before a hunt, the activities of small animals and the changing of seasons. And if they do not bring back a deer, the hunt is not seen as a failure, because that is only one small aspect of what makes hunting great.

One of the final lines carries perhaps the most weight, when viewed in light of Tony Frizzells’ stories and the very existence of the book: “I will cherish these memories as I grow old, and one day my kids will hear them told.”

As much as Frizzell talks about memories, he’s not a man to get stuck in the past. Forming new memories is just as important as appreciating the old, and he’s got plans for the future. Fall has come to town, and hunting season with it, and it would take a great deal to keep him out of the woods. Anthony is still his closest hunting buddy, and the time they’ve spent together has allowed them to talk and grow close, much as Frizzell did with his father. 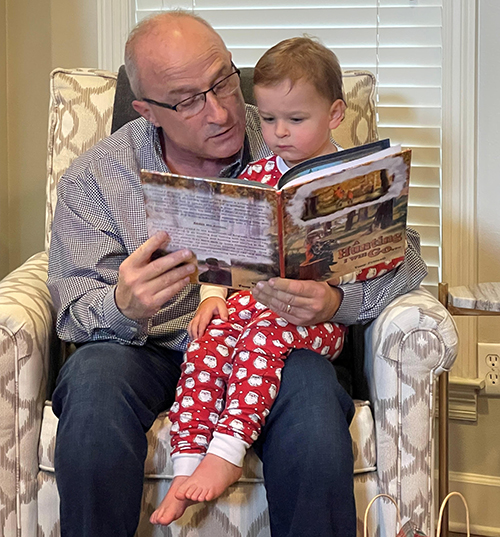 Tony Frizzell reads to his grandson.

As for his grandson, who is not yet old enough to hunt, Frizzell said,  “I do plan on taking him [out hunting] if he wants to, and I’m going to do everything I can to make him want to.”

He also revealed that he’s been working on an idea for another “A Hunting I Will Go” based around duck hunting. While it’s in a very early stage, not even sent to the publisher yet, he does hope to publish it some day and help even more people to enjoy the hunt and cherish the memories.

READ ALSO: Bring the Past to the Present with the Shiloh Museum of Ozark History