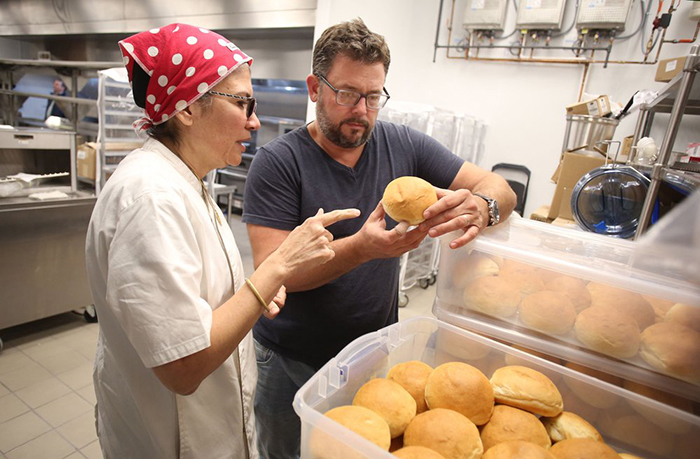 The Venezuelan native-turned-Fayetteville business woman is cooking up something special in her small, European-style bakery. And it’s not just the sourdough and brioche. For the last three years, she’s been helping change the lives of dozens of intellectually disabled individuals in the region. With a little help from her community, Daymara Baker hopes to expand that impact.

The idea for the Rockin’ Baker Academy came to Baker while on a flight. In her mind’s eye, she saw the shop. She saw the baked goods. The developmentally disabled employees she calls  “cadets.” She even saw the colors she would adopt for her branding. (It’s no coincidence that her last name is “Baker.”) 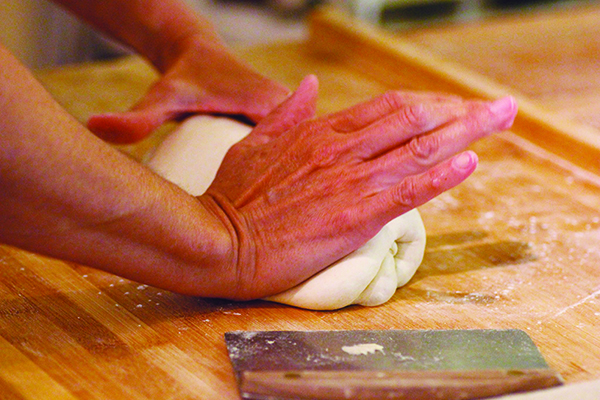 “I’ve also always been interested in education. I’m a strong believer in giving people the tools to succeed in life versus just giving them money,” she adds. “So, the concept I wanted to do was to create a place where someone could get on-the-job training to transition them into permanent employment.”

Baker had never worked in hospitality. She had never even cleaned a table, she says. She had worked for years for Chiquita Banana corporate. This would be an entirely new direction for her.

“Here I am, considering this concept that was so totally new to me,” Baker says. “But it was one of those, ‘wait – if I don’t do it, what if?’ I never want to have one of those moments where I wonder, ‘what if?’ If I’m going to do it, great. If it doesn’t work out, I can say that I tried and move on.”

The Rockin’ Baker Academy opened on November 11, 2016, without much fanfare. But according to Baker, that was by design.

“I didn’t really understand a lot of the dynamics behind the hospitality business,” she says. “In this case, it’s important to make a lot of noise when you open. I went the opposite direction because I didn’t want to go too big. I was worried about making mistakes. I went on the slow side, and I didn’t get the awareness because I didn’t have that punch at the beginning.”

Looking back, she believes that was probably a mistake. But it’s one of those teachable moments she can use. 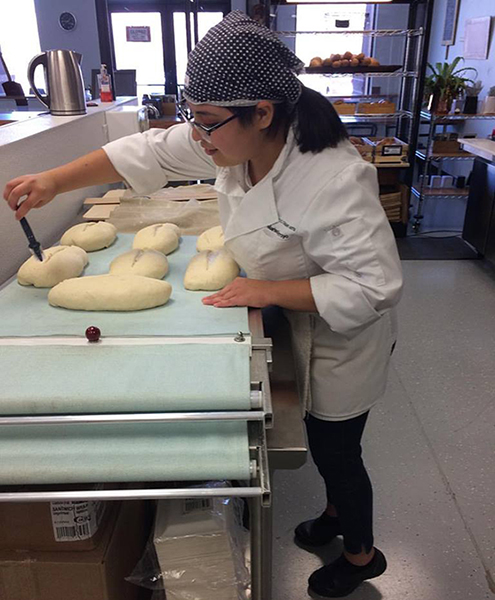 “I believe you learn more from your failures than anything else,” Baker says. “That’s not something to be ashamed of. I embrace my failures as a way to learn and grow and even help others move forward. There’s been a lot of learning.”

Baker also learned quickly that the market for European baked goods wasn’t where she had hoped it’d be. Her menu of fresh breads include sourdoughs and baguettes named for historic Fayetteville landmarks like the Frisco railroad, Butterfield Trail and Lafayette.

“I realize now that the market might not be totally there for the things that I sell,” Baker says. “That was a learning experience, and I had to adapt. That meant I had to learn to depend less on retail and more on wholesale. Of course, that brought challenges because my location is for retail. Because of that, I have a much higher lease than if I were in wholesale. But when you’re stuck in a lease like that, you have to figure out how to make it work.”

Despite those challenges, Baker is still determined to carry out her mission to help the region’s underserved intellectually disabled community.

“The individuals I’m helping are on the spectrum,” she says. “That means their social skills may be lacking. Having that retail side was an important part of my vision in order to expose them to engagement with customers.

“I wanted to help them learn how to talk to people, how to use a register and engage,” Baker adds. “That has been compromised because the retail side of my business is so much smaller than I had hoped it would be. But my cadets are still learning to work together as a team.”

The first Rockin’ Baker Academy cadet to come to Baker for jobs skills training was a young woman with difficulty socializing and speaking to others. 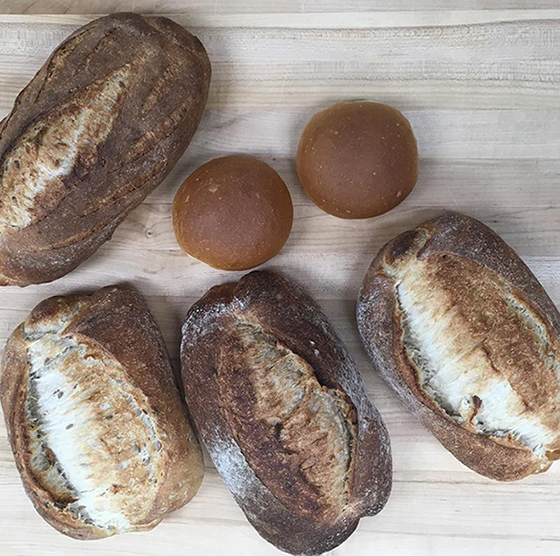 “I had never worked with someone with autism before,” says Baker. “That opened my eyes and made me see how huge of a void we have in this community. The population here is large, and it is growing. But nobody is giving these people a chance. If they don’t get the proper training, they won’t get the opportunity for employment. I thought I could provide that training.”

Her first cadet wouldn’t speak when she first started coming to the Rockin’ Baker Academy.

“Now, she runs my cash register and can explain our products better than anyone else,” she says. “When I saw just how well the program worked, I knew this is what I needed to do.

“She also ran my farmers’ market table,” Baker adds. “She began trading with the farmers, trading bread for other things we needed for the bakery. And she began doing that all on her own, without even being asked. This became her favorite thing. You had someone who was so shy she wouldn’t talk who is now going out and talking and engaging with people regularly.”

According to Baker, 83 percent of those with intellectual disabilities are unemployed or underemployed. In Arkansas, alone, she says, there are upward of 23,000 unemployed intellectually disabled men and women.

“We have such huge unemployment in this segment, and we have so many people looking for employees; I want to train them to fill that void,” Baker says.

The biggest challenge ahead of her will not be training her cadets for the workplace but retraining business owners and hiring managers to think differently about people with developmental disabilities.

“There are a lot of stereotypes about someone on the spectrum,” Baker says. “I’ve spoken to people who think all people on the spectrum are like Rain Man (the fictional character from the hit movie from 1988), and that’s just not true. If you open your eyes and stop trying to check these boxes as a hiring manager, if you can be open minded, you can recognize the talents that these individuals have.”

For example, Baker says some individuals with disabilities may have challenges trying to make eye contact with others. That could be a deal-breaker when it comes to a job interview with someone who doesn’t understand.

“If you can understand that trait, and you’re willing to look past that and focus on more important skills, you may find a great employee,” Baker says. “So, I’ve found that I’m not only having to coach cadets but also be an advocate to change the stigma of hiring managers. These people can be very successful if given the chance.”

Baker is visibly passionate about her work and what she is providing to her cadets. One cadet, she says, had come to her after being let go from a job after just two days.

“They didn’t understand her disability,” she says of the woman’s previous employer. “She came here, and now she’s thriving as a team member. She has an excellent memory, and she’s incredible with data analysis. She’s so precise, and that’s what you need when you’re hiring for a commercial bakery. Her previous employer didn’t know her great skills. I had to hire her myself.”

Baker is working hard to get her cadets ready for the workplace. But she’s also trying to get them ready for the world around them, too. She takes pride in having sent home caregivers who have come to accompany her cadets. When they’re with her, they get a lesson in being independent, too. 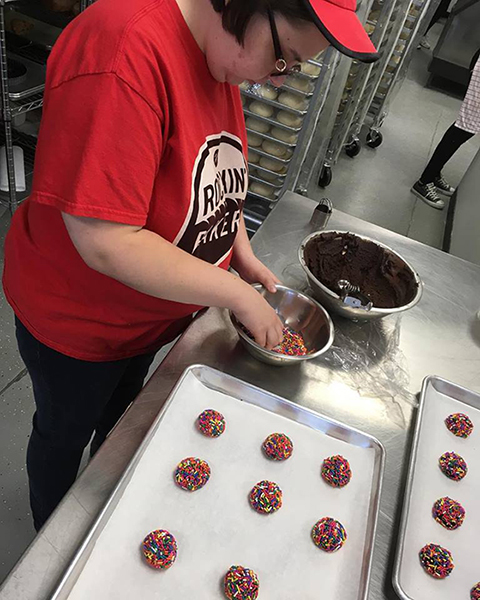 “I want my cadets to become as independent as they can,” Baker says. “I understand that some individuals will need someone with them. But I’ve found that in other instances, it can limit them. I feel that, in some instances, the caregiver may be just a little over protective.

“I want my cadets to learn that there are things they can do on their own,” she adds. “I want them to tap into their hidden strengths, hidden potential. These individuals are gems. They just need to be polished, and they can’t do that when someone is doing everything for them.”

In the three years that the Rockin’ Baker Academy has been open, it has helped dozens of intellectually disabled men and women. On any given day, six to 10 cadets come in for training in a commercial kitchen. Baker, herself, has hired upwards of six of her cadets to work for her. Others are placed in jobs with other commercial bakeries.

But for Baker, that’s not nearly enough.

“I want to expand,” she says. “I want to make this available to more people. I want to replicate my vision with other industries. I want to find more open-minded hiring managers that will help me give these great people a chance.”

The Rockin’ Baker Academy is at 3761 N. Mall Avenue in Fayetteville. The bakery is open for retail from 9 a.m. to 3 p.m. on Tuesdays and Fridays and on Saturdays from 9 a.m. to noon. To learn more about Baker’s mission, her cadets or to help her in her mission, visit rockinbakeracaemy.org.