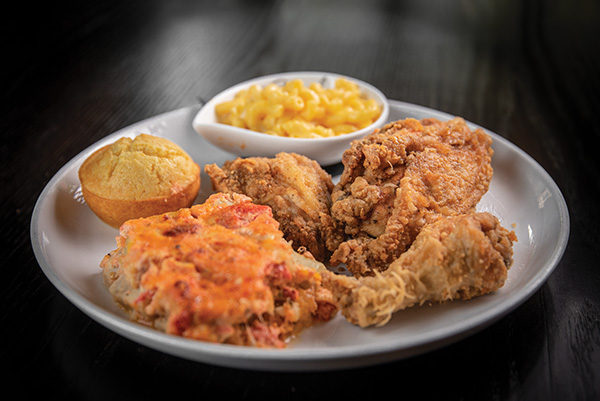 A Little Bit of Chicken Fried: Fried Chicken in Arkansas

Church, politics and fried chicken — so intertwined are they in the South, you might say they are children of the same Father. Rare would be the absence of fried chicken from any church’s communal table — about as rare as a preacher playing hooky. Much is at stake for a wayward preacher, namely the forfeiture of the reverentially dubbed “preacher’s parts” — the best pieces of the bird that has come to be known as the “Sunday Cluck” or the “Gospel Bird.”

Getting a spot at the table of the Monte Ne Inn Chicken restaurant in Rogers is a divine experience too. Ironically from the ruins of Coin Harvey’s vision has arisen not a phoenix, but, well, a flock of chickens. Twice a presidential candidate himself, Harvey came to Arkansas while working on the campaign of the future presidential candidate William Jennings Bryan. It would be his last stint in politics. Harvey quite successfully turned his Rogers land purchase into the health resort Monte Ne, meaning “mountain water.” Although it was long a mecca for the rich and powerful, the Great Depression set it on a downward spiral, leaving behind not much more than history to mark its existence.

About 50 years ago — not far from its ruins — its namesake opened. The Monte Ne Inn Chicken restaurant is a humble place, as is its current owner, David Myers, who for his share of decades now has kept the place and its fried chicken recipe true to its roots. This “little chicken house,” as Myers calls it, has become quite a mecca in its own right, drawing families, church folks, celebrities, politicians and foodies from around the world — the wisest of whom make reservations days in advance. “Family-style,” everyone passes around serving dishes of “all the fixins,” the star of which is that fried chicken — 90 thousand pounds of it yearly. 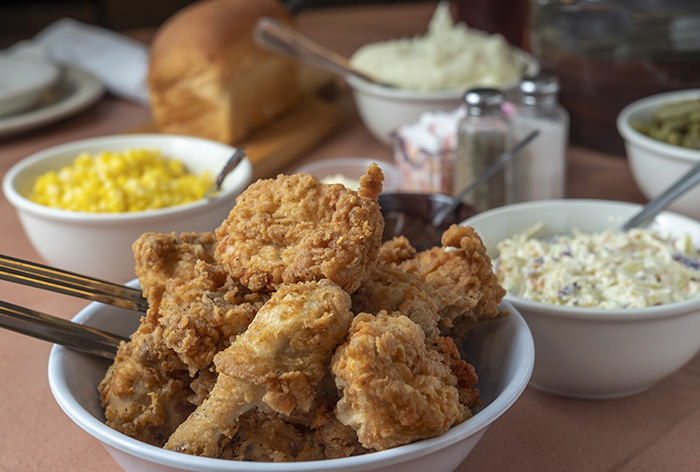 The only thing piled higher than the plates is the number of awards and recognition that Monte Ne Inn has received. Recognition has come from publications and organizations such as The Daily Meal, Insider, Only in Your State, CitiScapes, the Arkansas Democrat-Gazette and most notably the Arkansas Food Hall of Fame. While the chicken recipe is iconic, you won’t find it published anywhere. The only obtainable information is this: Fresh chicken, the largest pieces of which are skinned, floured, seasoned and cooked in vegetable oil. Notably, it is nine pieces with the breasts being done in the famous “KFC cut.” The keel  — the center of the breast — is cut separately.

The founder of KFC was another man who took the fifth on his ingredients. Harland Sanders knew his legal rights. Having practiced law in Little Rock for three years, Sanders took a swing at his own client, effectively terminating his livelihood. His career redemption came with KFC, even earning him his infamous title “Colonel,” bestowed upon him by a politician, the Kentucky governor.

But what really is the “traditional” Southern fried chicken recipe? The first fried chicken recipe published stateside was in Mary Randolph’s 1824 cookbook The Virginia House-Wife. A Virginian, true, a housewife, not by a long shot, Randolph was very politically connected, not only through her own families’ efforts but through those of the Jeffersons. Raised by her cousins, the parents of future president Thomas, Randolph was a bit of a precursor to Martha Stewart, although Stewart would no doubt wince at Randolph’s recipe, which instructed cooks to take the cut pieces of chicken, “… dredge them well with flour, sprinkle them with salt, immerse in boiling lard and fry them until they reach a light brown.”

A later New York Times article stated that Randolph’s recipe “has never been substantially improved upon.” Then and now, that remark — at least below the Mason-Dixon line — tends to provoke the kind of furor generally reserved for presidential primaries. Any number of Southern cooks worth their salt shakers will beg to differ, waving their own recipes in protest. Her recipe might long ago have been buried, but Randolph interestingly did become the first “resident” at Arlington Cemetery. Randolph’s later culinary redemption came when famed chef James Beard lauded her as “a far-seeing culinary genius.” Admittedly, it was her tomato recipes that he loved.

Randolph’s chicken recipe was essentially that of the immigrant Scots. An independent bunch, the Scots broke from the rest of the United Kingdom and Europe by frying in lard instead of baking or boiling. Feisty as they may have been, their seasoning was not. That came with the West Africans. Despite the fact that the chicken was considered sacred in their homeland, they proved they had mad skills at seasoning and frying it. The culinary imprint of immigrants from multiple countries is reflected in this and many other iconic dishes of the South, making Southern food a true fusion of cultures.

“In a way that somebody else converts to Judaism or becomes a Hare Krishna, I belong to the church of fried chicken,” says Top Chef co-host and Indian cookbook author Padma Lakshmi.

Shane Henderson might just say, “Amen” to that. The son of a preacher man, Henderson found his calling in the kitchen and his match in wife and business partner, Kim. Owners of Heritage Catering in Little Rock, the Hendersons’ success continues to reflect their own mad skills, including Shane’s training at the culinary institute of Johnson & Wales University. Graduates of the renowned school include Graham Elliot, Emeril Lagasse, Tyler Florence and yes, Blac Chyna, too. And like those chefs, the Hendersons are part of a new breed unafraid to put their own riff on this icon of the South.

“We noticed pickle-brined fried chicken on several menus a few years ago, and now it’s everywhere,” Kim says. “This was unusual, and inspired us to start thinking outside the box on new ways to fry chicken at Heritage.”

So, yes, you can find traditional fried chicken on their menu, as well as divine temptations such as their original Sweet Tea Marinated Fried Chicken or their Coca-Cola Fried Chicken topped with spiced honey. Nope, we’re not getting specifics here either, but Kim advises about “… always starting with a great brine — it adds flavor and keeps the meat tender and juicy.” Different breading choices of seasoning, flour, cornflakes or potato chips follow. At home, the Hendersons prefer to pan fry in a cast-iron skillet. For 200 guests? Well, the frying takes place in their Cajun fryers, using vegetable oil as a safeguard for those with allergies.

When asked what her favorite recipe is, Kim says, “Any fried chicken on the buffet in a small church anywhere in Arkansas.”

We may take different paths to our churches, we may vigorously debate our politics, but one thing is certain in the South — there are always warm smiles and hot fried chicken waiting at the table for you. Hallelujah.

Some of our picks for the best fried chicken in Arkansas: 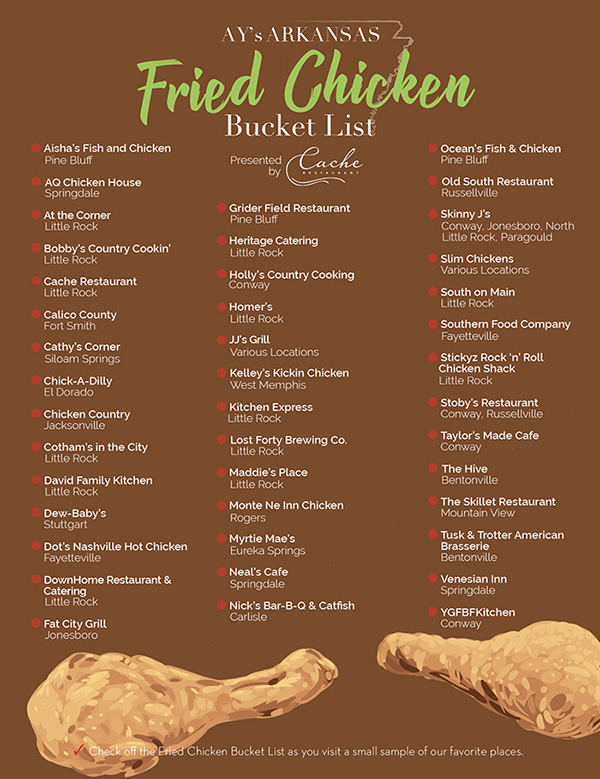