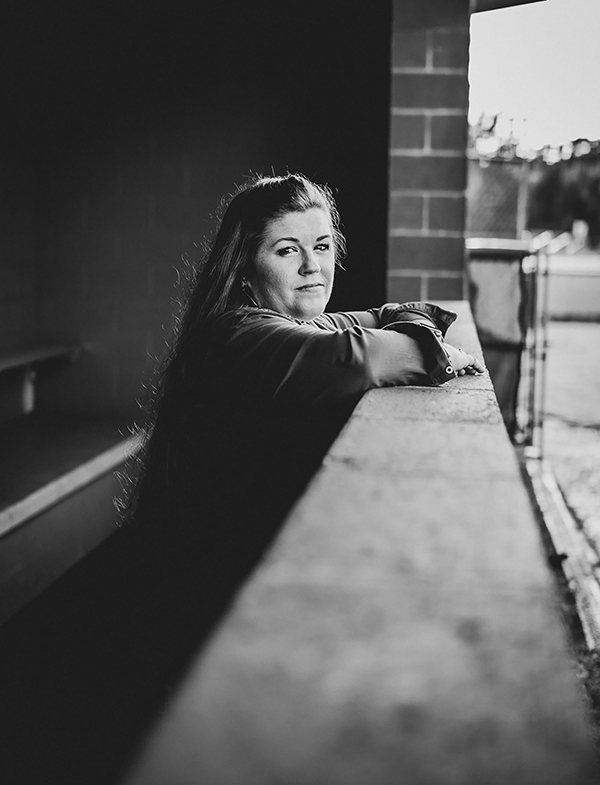 The words came out of Emma DonnAnn Crumbly’s mouth thick and heavy, muscling their way past the heart beating in her throat. A moment ago, the 39-year-old nurse had been on the phone with her mother who’d handed it over to the sheriff to confirm there’d been an incident.

“Not yet,” said the voice on the other end. “He’s still breathing. He still has a pulse.”

Crumbly, of Cabot, wouldn’t have had reason to call had a neighbor not sent her a text after seeing the emergency personnel arrive. Something in her said it was Jalyn, said it was bad, even before her mother picked up. Now, at the threshold of knowing for sure, she took a deep breath and spoke again.

“Did he shoot himself?” she said, her voice strange and foreign in her own ears.

“That’s what it appears to be.”

Telling the story almost a year later, Crumbly looks a person in the eye, but her gaze is somewhere far away.

“It was like I just knew,” she says. “When the sheriff answered the phone and said, ‘I need to speak to Michael [Jalyn] Crumbly’s mother,’ I immediately knew.”

A single tear rolls down her cheek, bringing her back from wherever she’d drifted to. She gives a shy smile and shores up her voice. 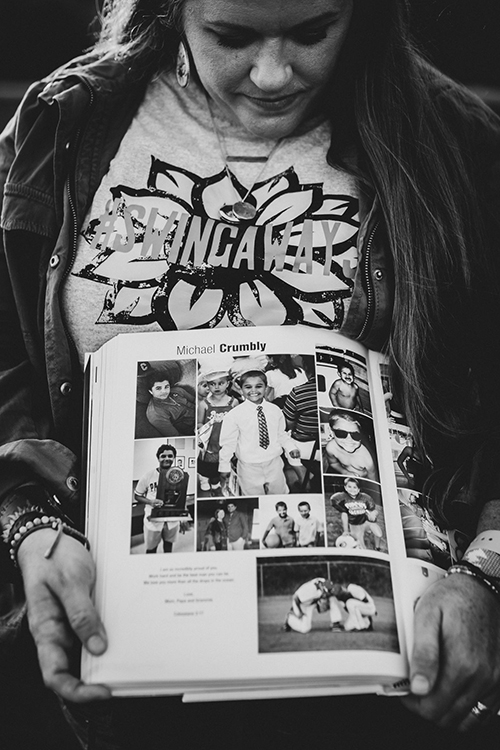 On Aug. 29, 2019, Michael Jalyn Crumbly climbed into his favorite truck and drove to his grandparent’s house, parking in the yard. It was lunchtime. He picked up a .357 pistol, paused long enough to send a photo to his recently-ex-girlfriend’s mother to show his intentions, then pointed the gun at himself and pulled the trigger. He never made it to the hospital.

The incident came on the heels of a tortuous summer for the 19-year-old. Crumbly says her son had “made a dumb boy mistake” during his first year of college, clarifying it only as the kind of trouble “we had to get a lawyer for.” The issue weighed heavily on Jalyn, who’d never been in trouble before, as did the aforementioned breakup.

Coming home was good for Jalyn, but even being around his mother, his grandparents and CrossRoads Cowboy Church, in El Paso, where he’d grown up, he couldn’t shake the cloud that hung over his head.

“He always had a good personality; he was witty and funny. He was a happy kid. He really did have a happy life,” Crumbly says. “But it just got worse for him, and you could tell that he was anxious and upset. He was physically sick, throwing up. The day before he passed away, I had taken him to the ER because he hurt so much. He would cry; he was broken, you know? Just so broken. He just couldn’t see the way out.” 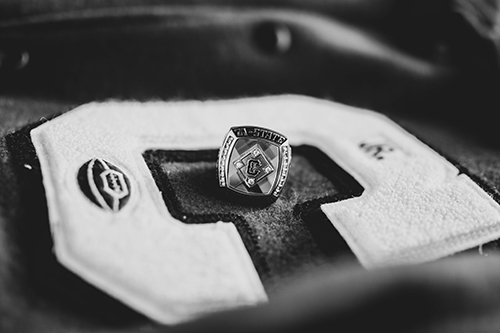 The day Jalyn died, his mother told him goodbye and tousled his head on her way out the door to work. All through high school she never had to worry about him, but now it was different. Since he’d been home, they’d spent more time talking about the unthinkable than they ever had. And still she couldn’t shake the feeling that it wasn’t enough.

“I would have never thought he’d do that. But, it’s just in your ‘mama heart.’ You just kind of know when things aren’t clicking, and they’re not right,” she says. “We would get in the truck, or my car, and we would ride around and just talk. I would let him talk, and he never said he was going to do anything like that.

“I just told him, ‘I’m just letting you know that [suicide] would be the worst thing you could ever do. You come to me. Let’s talk about it. ‘That’ is not an option.’”

Crumbly shrugs as if trying to dislodge a new card from the deck she’s been shuffling nonstop in her head for a year. Something she missed, something she forgot, something — anything — that makes things make sense.

“It doesn’t even have to be something that was related to him that he did or said; it can just bubble up. It’s very heavy. It doesn’t seem real. It does seem numb. You go through life, and most of the time, I think he’s at college. You’re in a different place in a grief moment like that.” 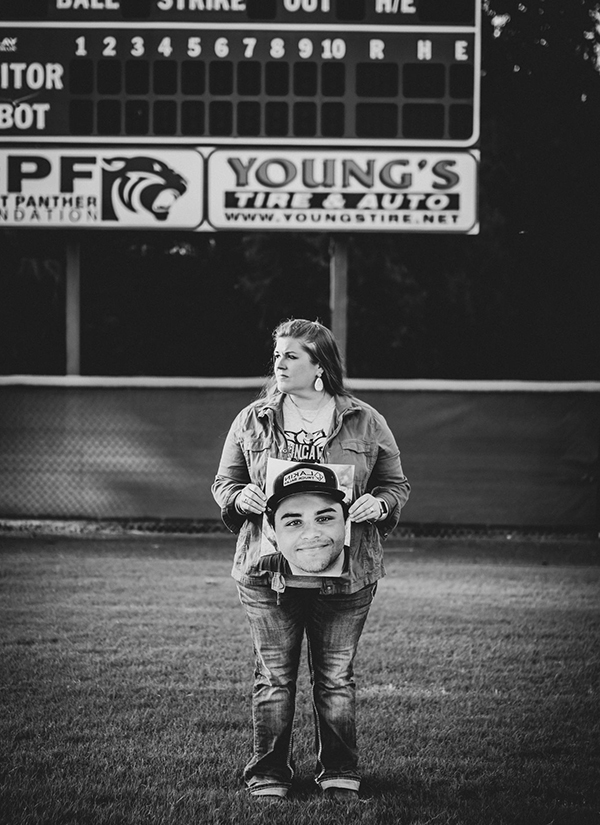 Crumbly stares into the infield while
holding a photo of Jalyn.

Jalyn arrived early in his mother’s life; she was just 19 when she had him. And even though his father would make some effort to be involved, from the start there was little doubt she was going to be both mom and dad, to him. But between his uncles and Crumbly’s father George, associate pastor of the Cowboy Church, the boy, didn’t lack for positive male role models.

His mother relates these happy memories with a warmth that belies the cold, unanswered question that still claws are her insides: Why?

“He had a happy home. He did,” she says, as if retracing her steps for the millionth time. “Though I was a single mom raising him, he didn’t want for anything. It wasn’t like we had a bad relationship. We were close. I mean, very, very close.

Crumbly knew she’d reached a crossroads in her grief when it became hard to pray. She insists she was never mad at God for Jalyn’s death, but when a preacher’s daughter can’t fold her hands for what she’s carrying, it’s time to do something with it. She didn’t have to look too far for the answer: a ministry to reach other families, founded in Jalyn’s name.

“My dad and I had gone out to see him after they buried him that day. We just talked about how cool it would be to be able to keep his memory alive,” she says. “A friend of ours made a post, and he wrote, ‘Swing away J.’ The seed was planted, even though knowing what to do with that really didn’t come about until later months.

“We started out wanting to hand out Bibles and at our last rodeo Bible camp, a woman came here, and taught us how to ‘Bible doodle,’ which is drawing in your Bible if you read a verse or whatever strikes you. So basically, we’re just getting doodling Bibles into anyone’s hand that wants it. We give them away.”

Crumbly said the ministry tackles the subject of suicide by sharing her family’s story and by providing an ear for young people who are struggling or families trying to cope with a loss. SwingawayJ shows up at youth rodeo events to spread its message, and Crumbly has even addressed women’s groups to talk directly to other mothers, the first time just months after Jalyn’s death.

“My ‘mama heart’ doesn’t want another ‘mama heart’ to hurt,” she says. “I really prayed about it. I didn’t write anything down the first time I spoke, and I didn’t know what I was going to say. I was like, ‘God, I just want you to speak. I’m going to get up there and just let it be your words that come out of my mouth.’”

The ministry has had an immediate impact. Crumbly tells of teenagers coming up to her privately at events wanting to talk about their struggles with suicidal thoughts. A grandmother picked up a Bible for her granddaughter. People send messages or call all the time, looking for help or direction. Crumbly has time for them all.

“I want people to be able to see Jesus in me,” she says. “I don’t have to know you to love you. Jesus loves you, so I love you. You’re important. People are more important than they give themselves credit for. You have a purpose, a God-given purpose. We all do. It may be to minister to your friend or to get that person who’s on drugs some help. We’re supposed to love each other. That’s what God wants. I know that’s what he’s called me to do.” 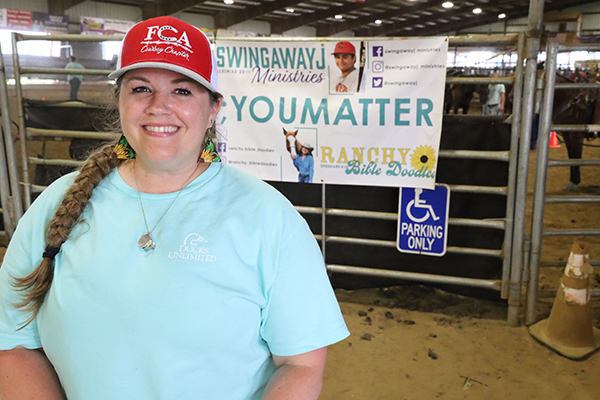 It would be poetic if the ministry and time had erased her pain, but that’s not how the real world works. Crumbly said if anything, her grief got more intense as she approached the first anniversary of Jalyn’s death. But she knows she’s headed in the right direction.

“I can honestly say that I’m mad at Jalyn just because he’s my kid, and he knew better,” she says. “But I don’t want everyone to judge my boy for the last thing that he did. Yes, it was bad. But, look at all of the possibilities that he could help. He was a tissue donor. He really was a good kid. He was just a dumb, 19-year-old boy — and I would tell him that, too. He knew it.

“I don’t feel like I’ve ended a chapter. I feel like breathing gets a little lighter, not easier, but lighter, as time passes. It doesn’t get any easier. So how cool would it be to, maybe, help somebody else who didn’t have to feel that pain? I can carry this pain if another mom doesn’t have to. I can handle it. I can deal with it if another mom or their child can be saved. Because you know what? I know where my boy is. God let me know where he is. I don’t have to worry about that.”