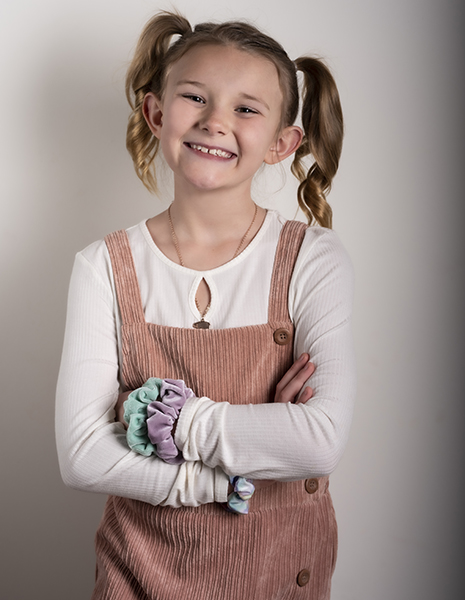 As she gears up for another bustling and audition-filled pilot season in Los Angeles, 8-year-old Hendrix Yancey and her family often wonder where they find the time. One thing not in question, however, is the fact that Hendrix was born to be a star. Her endearingly boisterous personality is apparent from the first moment you meet her. And that personality’s range shows through in each and every role she plays on the screen. Her happiness is contagious; her childlike joy, captivating.

The only daughter of Timie and Jake Yancey, of Benton, and sister of Hudson, Hendrix did not set out to become an actress; it wasn’t until a family friend picked up on her innate abilities and laid down the law — that Hendrix would become an actress.

“This is a crazy story.” Hendrix exclaims, “Basically, my friend forced me to [get into acting].”

Her mother goes on to explain, “I have a friend that’s a casting director out in LA. She’s from Arkansas, but she’s been in LA for 20 years. She casts a lot of kids. … She met Hendrix and was like, ‘Get your kid in acting or give me your child. She’s special.’ She felt it immediately.”

That casting director’s intuition became an ever-apparent reality as soon as Hendrix arrived on the scene. At only 5-years-old at the time, Hendrix acquired her first manager and agent in the middle of June, flew out to LA for the first time in August and booked her first acting role by September. 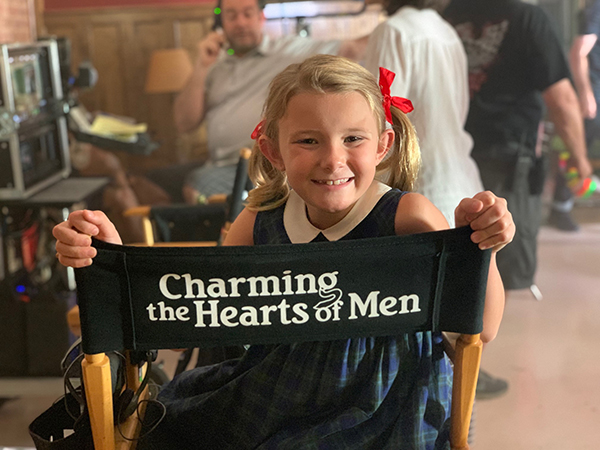 Hendrix on the set of Charming the Hearts of Men.

“It was crazy,” Timie says. “You don’t really ever hear of that happening.”

This first gig was in a 2017 television series called Versus, which was Gatorade’s first scripted series. Hendrix is credited in four of the series’ six episodes. She was on the map.

Then came the big break that many later-in-life actors and actresses look back on as “the one.” Hendrix had established herself for her early roles, became an IMDb official actress and made connections in the industry. Now, she was about to be seen on millions of television screens around the globe. The Netflix Original Series Unbelievable was open for auditions.

Hendrix submitted a self-tape audition from her home in Arkansas for the series, which was open to global applications — many of whom the studio executives and casting department were seeing in person in LA, New York and Atlanta. Despite those odds stacked against her favor, Hendrix’s talent won out.

“I sent it in, and they were like, ‘You booked it! You booked it!” Hendrix says in excited reminiscence. “[They said] they loved my tape.”

What happened next was even crazier, although it has become commonplace for the Yancey family. The studio put Hendrix on “avail,” which essentially means that she is to be available for the block of time the project will be filming. But then the family was met with a week of radio silence, until one day at 2 p.m. while out with friends. Hendrix’s agent called and told them that the final approval was in front of executives at CBS and Netflix and to standby. Just three hours later, the phone rang again. 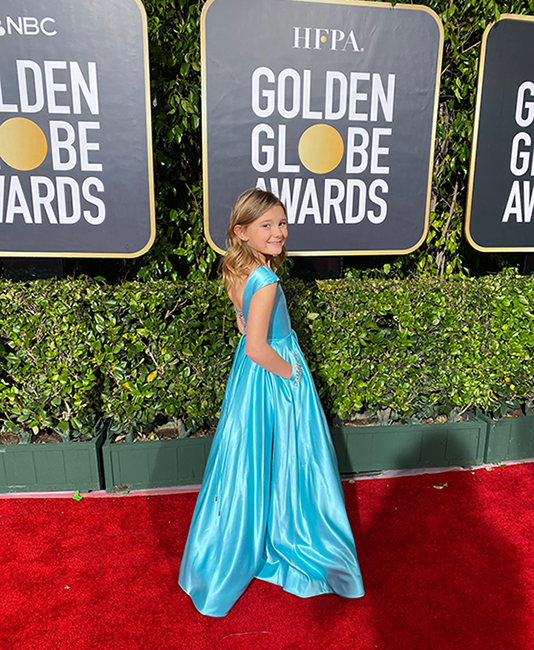 Hendrix at the Golden Globes.

In Hendrix’s mind, working with the likes of them could be summed up in one word: “Awesome.”

“They were funny, nice,” Hendrix goes on to gush. “They helped me out with lines that I didn’t know.”

In January of this year, Unbelievable was awarded nominations in four different categories at the Golden Globes. For Hendrix and Timie, this meant the mother-daughter duo would be soaking up the red carpet, rubbing elbows with some of Hollywood’s most elite.

“It was really fun,” Hendrix says. “I photobombed one of the pictures.” 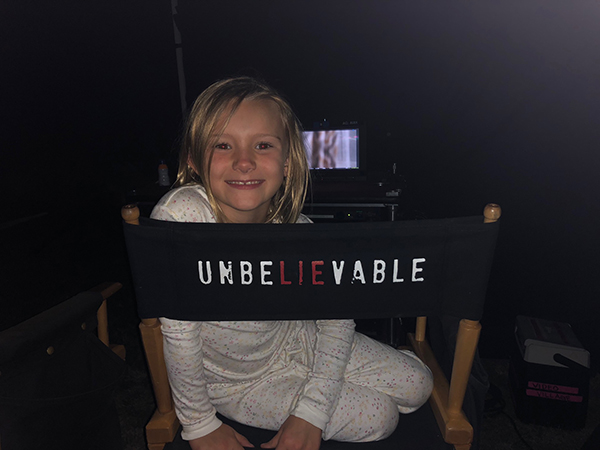 Hendrix on the set of Unbelievable.

“She is in every one of Renée Zellweger’s photos,” Timie adds, still a hint of disbelief in her voice.

“Oh, OK. I’ll get right on that,” her mother banters back before continuing. “It was the best night of her life. And I was her plus one, so I had a really unique position of being sure your child … has manners. … But I [also] wanted her to live her best life and be rewarded for her hard work.”

In addition to photobombing the two-time Oscar winner in Zellweger, Hendrix also met the owner of Icelandic Water, Demi Burnett from The Bachelor, and the producer of the Oscar surprise international film, Parasite, and a writer with the LA Times. 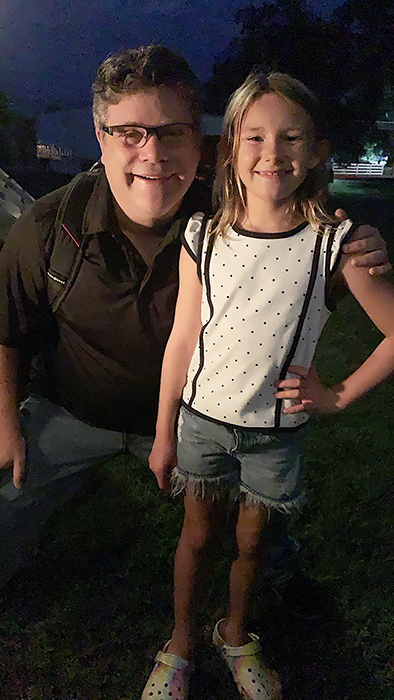 This networking ability was especially evident while filming for one of her latest endeavors, the feature film Charming the Hearts of Men, which is currently scheduled for release in September 2020. Her costars in that movie include Sean Astin (The Goonies, Lord of the Rings, Stranger Things) and Kelsey Grammer (Cheers, Frasier).

“I don’t ever tell her who anybody is because I want her to have an authentic connection with them,” Timie says. “So, [Grammer] is filming, and she’s watching him. He wraps, and he comes and sits in there — in those actor chairs — right beside Hendrix. She looks at him and she says, ‘I’ve been watching you back here, and I just want to tell you, you’re a really good actor.’ And he was like, ‘Thank you, I appreciate that.’ … After about five minutes of talking to him, she looked at him, so authentically, and she said, ‘Kelsey, have you ever considered maybe being a comedian?’

“He’s very sweet. You can tell he has daughters.”

Hendrix also became friends with Astin while on set for that film. He taught her a magic trick, which she has since perfected, and shows off any chance she can.

2020 is shaping up to be another busy year for the Yancey family. In addition to the release of Charming the Hearts of Men, Hendrix will also star in the horror mystery Dweller, which has wrapped up filming and is in post-production. This spring, mom and daughter are both back in LA for at least multiple months, as the actress is once again pitching her talents to executives at auditions for pilot season. This after spending time in both Atlanta and Nashville over the past two months. It’s a lifestyle that took some getting used to. It often interrupts vacations, but the Yanceys have learned to relish it. 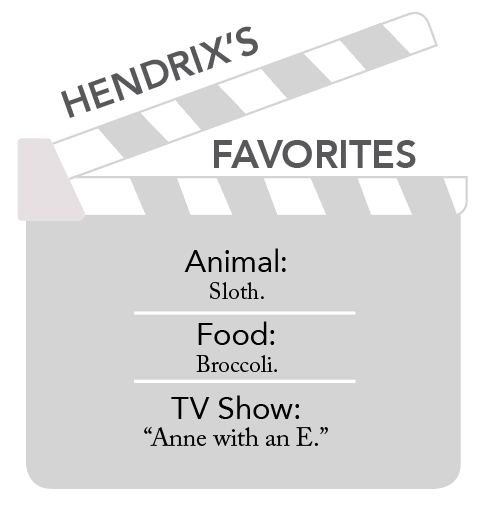 “The first time we went to LA, we didn’t know anybody,” Timie says. “It was really lonely — me and a 5-year-old. Now we’ve spent so much time there that we actually have a really good group of friends. So, it’s cool to get the kids together. … And you see these kids, and they have these crazy, unbelievable resumes. But then, when you get them together, they’re absolutely, 100 percent, normal kids.”

“You have to literally take one day at a time, or you will absolutely go crazy,” Timie goes on to say. “I know where [we’re] supposed to be today, and, at any point, where we’re supposed to be tomorrow can change. … We can’t even book return flights.”

But with a natural-born talent like Hendrix’s, her dreams and happiness are worth the sacrifices.

“It’s amazing to me how crazy awesome she is on set,” Timie says in awe of her daughter. “She is able to focus and take direction like an adult.

“I just want her to be happy. Acting is both everything and nothing that I expected it to be, but I hope for her that it not only fulfills that outlet that she needs for her creativity, but it opens doors for her to do whatever she wants to do.”