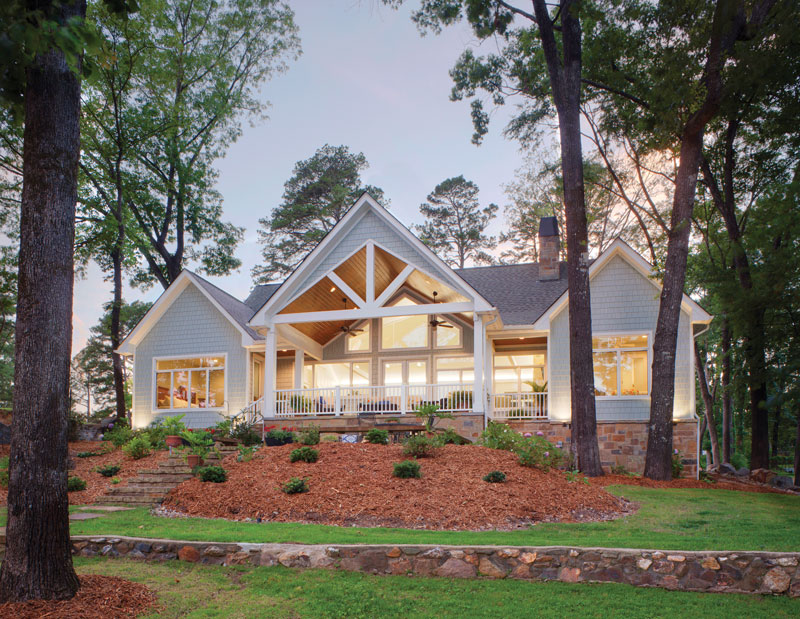 [dropcap]O[/dropcap]wning a home in Hot Springs after living in Little Rock for nearly four decades was an easy decision for Kay Koonce.

Koonce’s roots in the area run deep. Her grandfather was the Hot Springs chief of police and her father was the Garland County sheriff at one point. 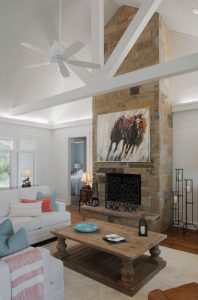 Itzkowitz received the painting over the fireplace, painted by artist Lee Reynolds, from his aunt and uncle. He said it’s at least 40 years old.

When Koonce and her long-time partner, Marvin Itzkowitz, started looking at property for a Lake Hamilton retreat, Koonce knew she wanted to be near her parents, but she never dreamed they would end up buying the lot and home adjacent to the resort where she grew up.

“We discussed whether to renovate the existing home or to build a new home for over a year,” says Koonce. “It was a hard decision to tear down something that had a lot of character and history. A house is not a home until it has all those memories and you know that home had so many memories,” she says.

The former owners, the Deerings, had lived in the home for a long time. “They had a beautiful yard and really worked hard on it as long as they could,” says Koonce.

Itzkowitz and Koonce ultimately decided to tear down the house and build a new home.

“It about killed Marvin to tear that house down,” says Koonce. Itzkowitz’s family owned Sqaure Deal Pawn Shop in North Little Rock. When he closed the business it was 100 years old. “For Marvin, you just don’t throw things away. It was a struggle for him to do that.” The couple also knew that once they started construction they were going to lose the trees and the character of the yard as well.

“This is only the second home I’ve ever built and the first house was just for myself,” says Koonce. “I really wanted Marvin to love this house. He wouldn’t even give me an opinion on things. He would tell me to do what I wanted and to make sure we don’t have to replace anything.”

To begin the process, Koonce started collecting images from anywhere she could find them – a magazine photo here and there, pictures on Pinterest and home websites on the Internet. “I kept anything I liked,” says Koonce.

Koonce took all of her photos to Wiley and he told her about draftsman David Mitchell.

“We knew what we wanted and didn’t feel like we needed an architect. Justin was comfortable with him so we went with him,” says Koonce. 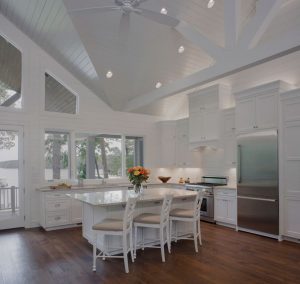 The interior colors are slightly deceiving. While the kitchen cabinets are white, the walls are actually a pale gray.

The house took about a year to build, and the couple still had a major decision to make. What should they do with the boat house?

“Once you tear it down, you have to have plans and approval to get it built back,” says Koonce. “You even have to get neighbor approval.”

“The builder kept saying he felt the boathouse would be a major renovation and he was right. When we finally decided to tear it down, the cinder blocks it stood on were like toothpicks,” says Koonce. Koonce said the foundation was so unstable, he didn’t know how it stood as long as it did.

The inspiration for the home’s design inside and out is Cape Cod. “It means vacation to me,” says Koonce. “I want it to be as comfortable as possible. That’s why every bedroom has its own bathroom.”

The color inspiration of pale gray and white came not only from the Cape Cod cottage style, but also from a house Koonce saw in Little Rock. “I saw this house and just loved their exterior color. I got in touch with them and they called me back and actually gave me the color,” she says. “People are so kind.”

The interior colors are slightly deceiving. While the kitchen cabinets are white, the walls are actually a pale gray. “It’s very subtle,” says Koonce. “I wanted people to walk in and feel light. This really is our happy place. I didn’t buy anything for the house unless it made me smile. The color, the design, the fabric, something about it had to make me happy.” 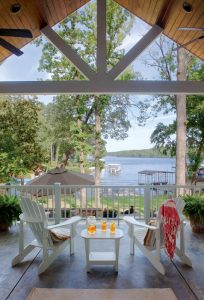 Relaxing on the back deck with friends and family making memories is the couple’s new favorite pastime.

A PLACE WITHOUT WORRY

Growing up on Lake Hamilton provided a lot of memories for Koonce and she wants to have those same memories with her kids, grandkids and friends. “Just to be able to share that fun time again at the lake and not have to worry about what’s going on at work and home,” says Koonce, “it’s so important to me and Marvin.

“We have so many friends who have been generous to us. We want to be able to return the favor.”

The couple has hosted a few parties already and intend to entertain on a regular basis. They are anxious for the Deerings, the former property owners, to see the house as well as IItzkowitz’s 99-year-old mother. “Marvin wants it to all be finished so we can show them. He wants the yard to be perfect and we aren’t quite there yet.

While the yard might not be completely perfect yet, the house is certainly a polished project. “I love the kitchen,” says Koonce. “I get to prepare fun meals for friends and family and then sit out on the back deck and enjoy it all.”

“I think Marvin loves the house now, says Koonce. “He tells me how nice and comfortable it is and it makes my heart warm when people compliment our home. Marvin says ‘It was all Kay, it was all her.’”