A Place of Whimsy 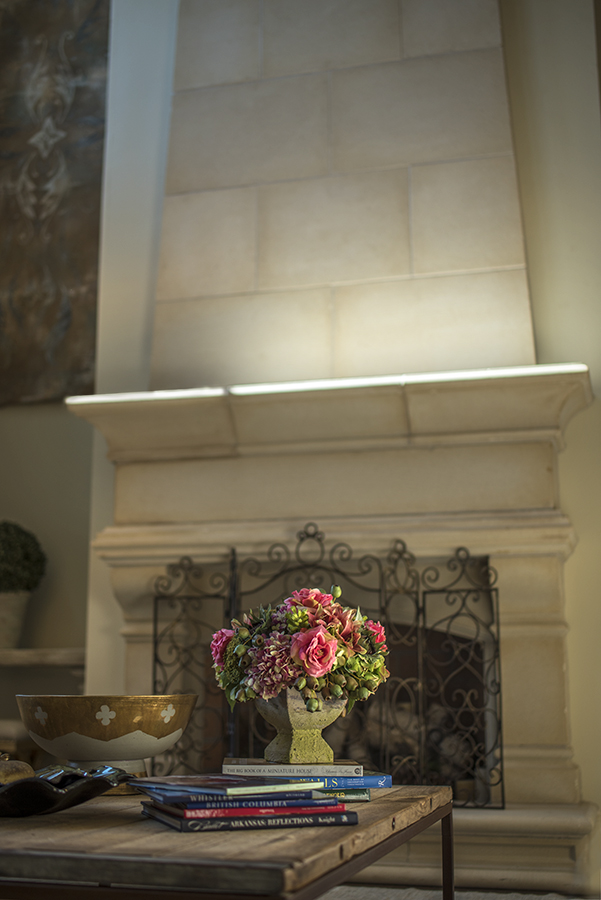 By Kim Dishongh | Photography by Jamison Mosley
Robyn and Dr. Jason Stewart enjoy whimsy, and they’ve made sure it’s a part of their living space.
There are unexpected surprises throughout their North Little Rock home: a doll-sized pool and cabana tucked into the lower shelf of an end table, a tortoise noshing on a salad on the balcony and a life-sized Batman behind a false bookcase, to name a few.
A few years ago, longing for a bigger yard and a pool, the Stewarts opted to build a new home just blocks from where they lived. 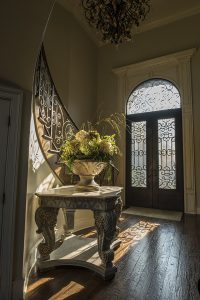 The Stewarts were inspired by the French look for their North Little Rock home.

“In our house before this, everything was so dark and so big because that’s what was in style,” says Robyn. “I’ve always liked the French country look, so that’s what we did here.”
As such, the colors are soothing and serene throughout the home. That doesn’t mean, however, that furniture pieces that didn’t fit the new design scheme were left behind.
“It’s better to repurpose, I think,” Robyn says. 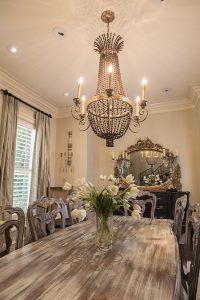 The family’s dark wood dining set was lightened up by Angelfish Studios.

The family’s dark wood dining set for eight was lightened up by Angelfish Studios, with a distressed white and blue-gray finish. Angelfish also made over column lamps, chairs and other furniture pieces throughout the house and completed an elegant facelift on a once-brown pool table. 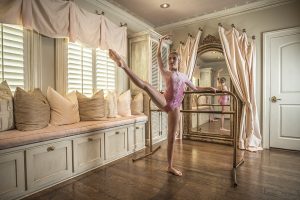 Twelve-year-old Whitney, who dances competitively, has her own ballet studio in their home.

The Stewarts spend most of their time together in the hearth room, where there is space to pile onto the comfy sectional to watch Netflix, relax on a plush chaise lounge or cozy up in an armchair. But Robyn Stewart’s favorite room in the house is the dance studio, where 12-year-old Whitney practices ballet, sometimes with her teacher. Whitney dances competitively and has traveled as far as Poland to perform.
“She really dances about 40 hours a week,” says Robyn.
Bruckman Studios played a big role in the design of the dance studio, she says. Andrew Bruckman transformed the ballet bar, once a simple aluminum structure, into something far more refined. A ceiling fan recreated with a faux finish and stencils, and grasscloth on the ceilings, trimmed with a velvet border, are perfect complements to the silk drapes that surround two ornate nearly floor-to-ceiling mirrors.
The Stewarts enjoy antiquing, and recent finds housed in this room are a Mahjong game and a vintage suitcase-style record player that Whitney located for just $10. Bruckman added a touch of blue to the glazing on bins beneath the window seat and to the built-in cabinets to highlight the blue of the record player case.
“There are flea market finds all over the house,” says Robyn. “There are little surprises everywhere. You just have to look for them.”
The dance studio previously served as a playroom for Whitney and Mallory, 10, and a daybed with trundle remains there because removing it would have scraped the wood flooring planks and required redoing crown molding. The plush bolster and throw pillows make it a cozy place for spectators to watch dance sessions. That room has an exterior door that can be closed to muffle sounds of dance and music that come from within.
The Stewarts’ master suite features a garden tub and walk-through shower.
“Twenty people can fit in that shower,” Robyn says. “We have a picture of 20 kids in swimsuits in there.” 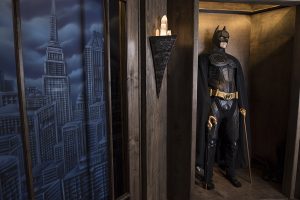 Inside the home theater, a life-sized Batman costume hides behind a false wall.

Their home is often filled with children, friends of their three daughters who come over to watch movies in electric reclining seats in their home theater, where cabinets are filled with hundreds of new-in-the-package Batman toys that Jason has been collecting for years. Batman murals on the walls — a larger-than-life painting of the superhero on one side and a dinosaur on the other, each peeking over huge covered-foam boulders, create the sensation of wandering through Batman’s cave. Close examination of a glow-in-the dark mural of the cityscape, tucked behind a faux window frame, will reveal a building labeled with the family’s surname. A red Bat phone — under a glass dome, of course — has a spot among the seats.
Imitation bookcases open to reveal storage on one side of the room and on the other a life-sized Batman — a mannequin wearing a leather Batman costume custom-made to fit Jason Stewart.
A door covered with a Joker card leads from the theater room to a hallway that continues the cave feel with marbled walls and a black ceiling lined with a vein of quartz.
“We obviously like toys,” says Robyn, whose hobby includes transforming castles and doll figures and furniture into new things. Her art room has glass curio cabinets filled with past projects and a table in the middle where she’s currently working on converting a purple and pink princess castle into Santa’s workshop.
“We love to make things,” she says. “Jason has a workshop outside, and he can draw like nobody’s business. And our 10-year-old can, too. That’s why we have the art room. She just goes in there making things for hours — slime sometimes, just cool stuff.” 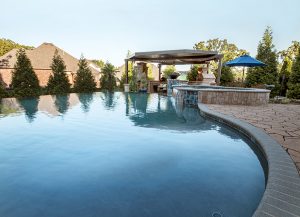 This Richard Harp designed home features a swimming pool that is incredibly inviting.

The Stewarts and their friends also enjoy gathering around their pool, where a cabana with an outdoor kitchen and a wood-burning fireplace has a fan that can disperse cooling mists or insect repellent. Equinox louvered covers over the cabana can be opened to let in the light or closed to provide a shady spot.
“We keep them closed all day because, of course, it’s just too hot,” says Robyn.
In the evening hours, bright lights surround the pool, and flames can be coaxed from fire bowls in the corners. Water on the far side of the pool tumbles into a waterfall. The entry to the pool is emblazoned with a Batman symbol.
Couches and chairs fitted with cerulean cushions and adorned with brightly colored petal pillows are arranged on a festive rug on the covered porch and, above it, a similarly outfitted balcony is home to Pedro the tortoise and Rosy the box turtle. 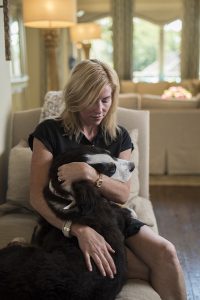 Robyn, and her four-legged family member Harley, relax inside her spacious home.

Jason brought Pedro home from a pet store in Dallas in November 2016. Pedro weighs about 7 pounds now but will grow much larger, Robyn says. The family found Rosy in the pool drain about two years ago.
Bailey, 21, refers to the couches on the balcony as the “sleeping couches.”
“I don’t know what it is, but since we got those couches out there every time we go out there someone falls asleep,” says Bailey.
Bailey, a recent graduate from the University of Arkansas, will be leaving in the fall for an internship with Walt Disney World, but her room will be waiting for her when she visits home. The walls are black glazed with lighter tones — some metallic — and serve as a contrast to the creams, golds, silvers and bronzes of the bedding in the room.
“Black is my favorite color and I just got this room the way I want it,” says Bailey. 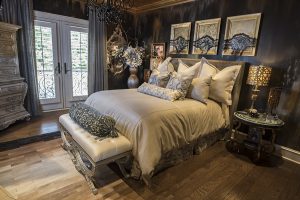 The Stewarts’ master suite is something to behold.

In Mallory’s room, twin headboards have been fused to make a king-sized bed, which is topped with pillows from Cobblestone and Vine, Laura’s Draperies and Bella Boutique – and a stuffed sloth.
“We call her ‘Sloth,’” Bailey explains, “because she likes to sleep until 1 p.m.”
In the living room, the home’s blueprint — complete with the stains left by construction managers from Richard Harp Homes who oversaw the building of the structure — is framed and perched atop a tall cabinet. On the opposite wall, concrete panels are arranged on the wall above the fireplace, flanked by long canvas paintings by Tracy Rivers, owner of Angelfish. Rivers created several other paintings throughout the home.
The family has three cats and a Bernese Mountain Dog, all of which roam mostly freely throughout. Their home creates a luxurious place for them to relax and enjoy each other’s company.
“A lot of our friends have lake houses or vacation houses but we’re not good at that,” says Robyn. “We just need one place. We have a lot of fun here.”

Above It All: With Views Atop A Mountainside, River Rock Builders of Central Arkansas Showcase What They Do Best
April 5, 2021

Entergy: Save Energy and Money with Entergy Solutions
April 4, 2021