Taylor’s Steakhouse serves up quite possibly the best steak in Arkansas. But are you willing to put in the miles to get there? I hope so. 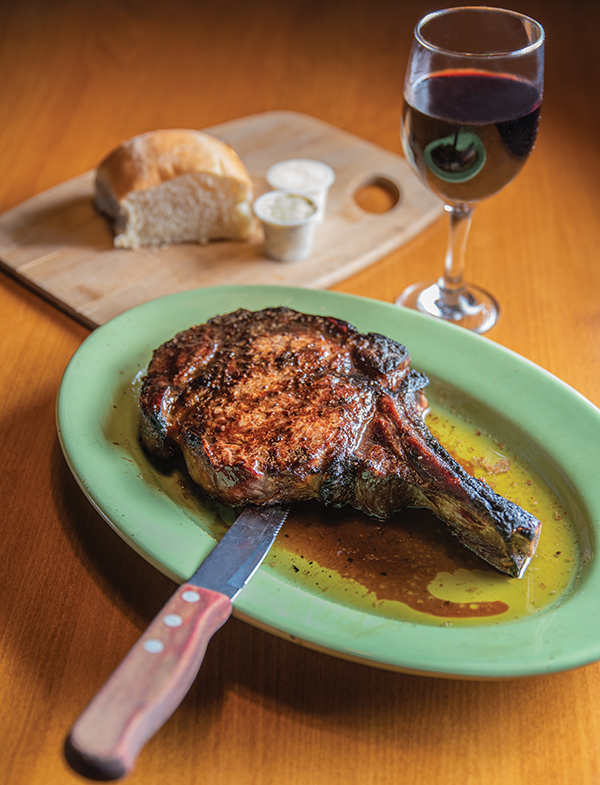 From Little Rock, expect an hour and a half drive. It’s a small price to pay for steak greatness. The further you get from the capital city, the more tranquil the expedition gets. On U.S. 65, it’s smooth sailing as you roll through the towns of Grady and Varner. Turn off at Gould, and spend the last 15 minutes winding your way through backroads surrounded by manicured farmland. The soothing glances at rows of corn might be interrupted by the crop duster 100 feet above, a sight that proves to be every bit as mesmerizing. This is pure Arkansas. 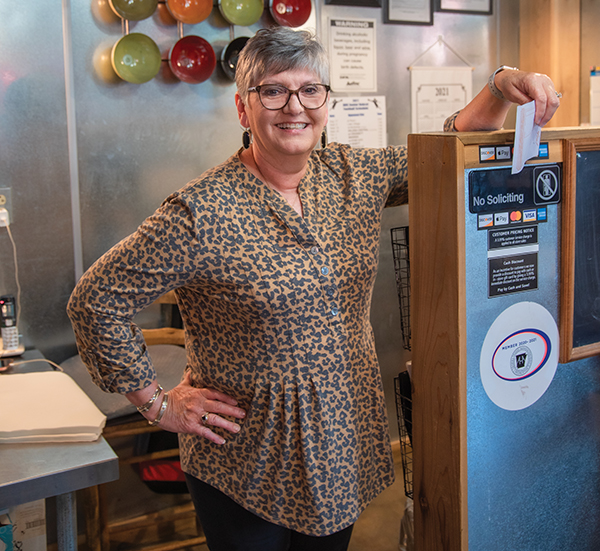 Then, on the outskirts of Dumas, Taylor’s Steakhouse appears out of nowhere — not the spot you would think to find not only one of the best steaks in Arkansas, but one I would put against any in the country.

Thanks to a little planning and GPS technology, I arrived at 5:30 p.m. sharp on an early Thursday evening, right at opening. Co-owner Pamela Taylor was there to greet me. She is a talker, while her husband, Chuck, who seems quiet by nature, resides in the kitchen. The two form a dynamic duo. 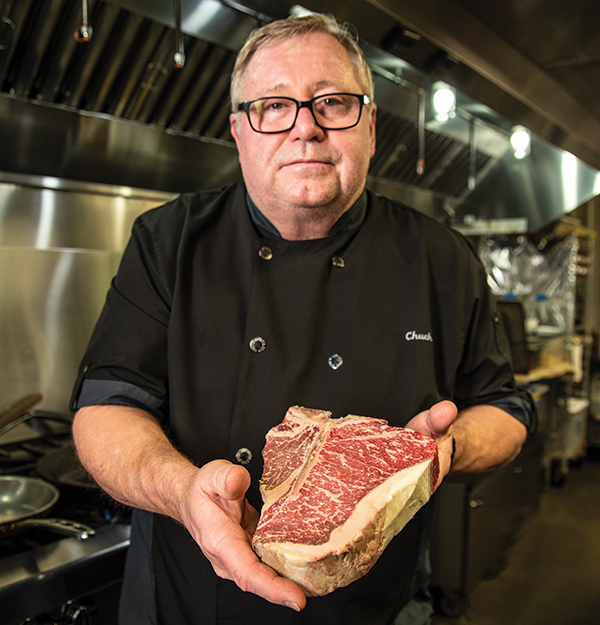 Before sitting down in an almost empty restaurant, I took a gander at the setting, as it had been more than three years since my previous visit. Nothing had changed. It’s casual for a steakhouse, with no white tablecloths to be found. So if you are pondering whether or not to bring the kiddos, just know this is a family friendly environment. Bright, modern bovine art, along with framed accolades of write-ups and awards from years past adorn the walls. Look left upon entry to notice the pride-and-joy of Taylor’s Steakhouse — the meat-aging chamber filled with steaks that will eventually meet Chuck’s hands for a proper trimming. 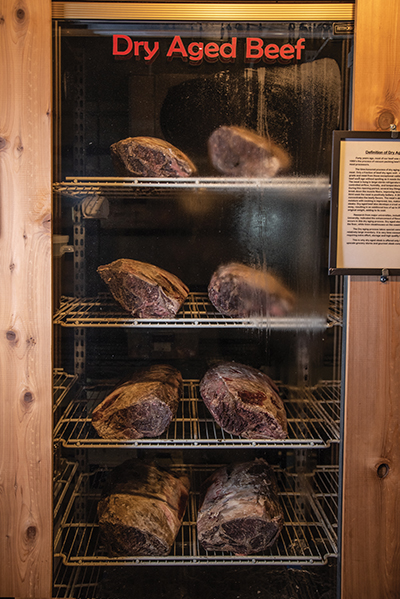 The “sometimes longer” refers to special occasions, like the 120-day aged ribeye that brought me through the door in 2018 or the 1-year aged offering Chuck let me sample on this night. Chuck isn’t hesitant about pushing the steak-aging envelope, and the outcome often yields an intensely flavorful product. And while that’s all fine and dandy, as Pamela tells it, the real difference is the meat itself.

“Hands down, the quality of beef is what makes the difference,” she says. “We strive to get the best quality.”

According to the dining room chalkboard, that’s USDA Prime Black Angus. At the very top of the menu is Taylor’s signature bone-in ribeye, a 20-28-ounce behemoth that would be an absolute mistake not to order. On this night, the steak arrived at my table swimming in a pool of its own juices, along with a small loaf of bread, a baked potato and a side of creamy coleslaw that I could not resist adding to the mix. For good measure, I also ordered an 8-ounce filet mignon, you know, for research purposes. 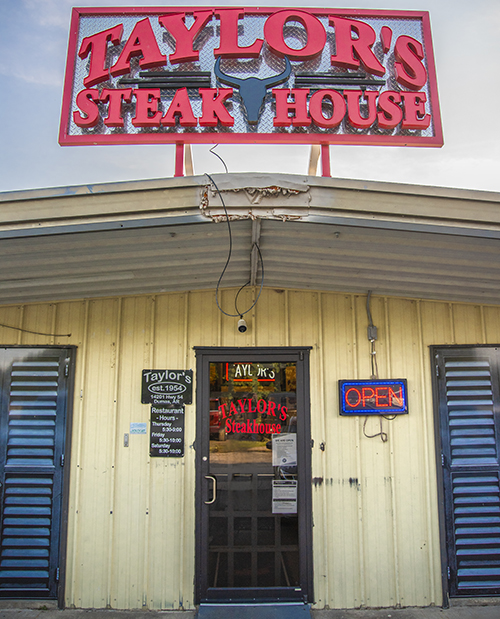 Both steaks are sure to delight, but the medium-rare ribeye — with all its flavorful marbling — is why most folks make the trip to Dumas. Those subtly charred edges have just the slightest bit of funky, bleu cheese taste, a product of an aging and trimming process done right. How a human could finish one of these steaks is beyond me. Each bite is as rich and decadent as the one before. The smaller, leaner filet is nothing to sneeze at, especially after dipping each forkful of steak into a plate of meat juice. This cut will also allow you to save some stomach space for dessert, as the restaurant is known for its cheesecake.

The entire Taylor’s Steakhouse experience is special, and although current rising beef prices have a ribeye sitting at $65, you would have to pay at least twice that amount, if not more, to eat a steak of this quality in a big city. Whether Chuck and Pamela like to admit it, churning out memorable steaks in a small Arkansas town does come with added pressure, due to the fact that so much of their clientele are traveling great distances.

“We want every steak to be the best for local and out-of-town customers,” Pamela says. “We have many customers who say they save up to make a special trip to visit us. It’s so fun to see return customers and the ones who save to celebrate special occasions. We get so much satisfaction hearing all the wonderful compliments from people who truly enjoy the meal and service, especially from those who say they have eaten all over the world and ours is the best.” 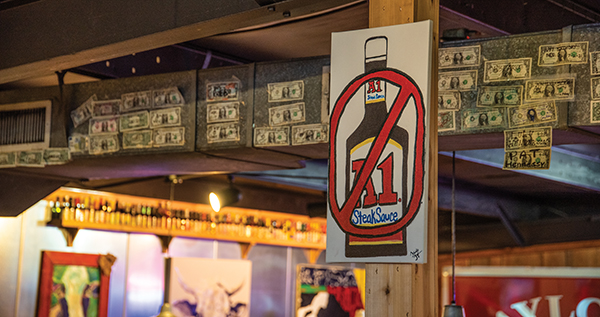 Saying this steak is the best is not hyperbole, at least not to me. But here is the one caveat I have yet to mention: Taylor’s Steakhouse is only open on Thursday, Friday and Saturday nights, which is a small window each week to experience the steak of a lifetime. The limited hours only help build intrigue, and it is also why I suggest calling ahead to make a reservation, just in case. Even though the restaurant was empty upon a typical Thursday opening, it was darn near full by the time I left. I would hate for you to drive all that way and not get a steak. Well, I guess you could order one and eat it in your car, but that is only for emergency purposes.

And as for that drive home? Let’s just say that being stuffed full of steak and cheesecake makes for a less enjoyable trip than the one to Taylor’s, but I am sure you’d agree that being uncomfortably full is a small price to pay for greatness.