A Simple Man, An Extraordinary Life: Centenarian Reflects on Service, Family and Fish 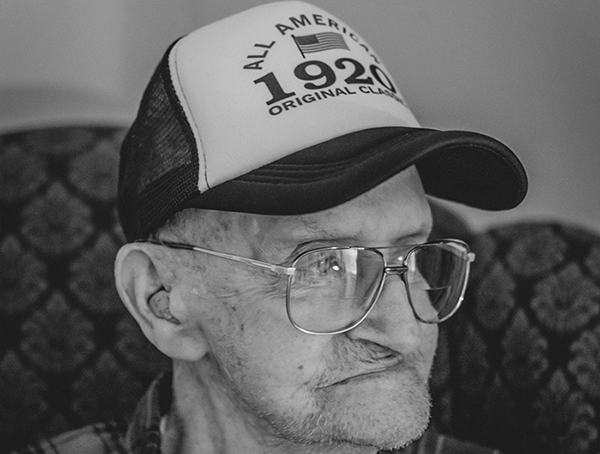 Newspaper clipping courtesy of the City of Lonoke.

Neal Anderson’s life played out to be anything but ordinary, yet if you ask the 100-year-old veteran and businessman the secret to a long and happy journey on this earth, he’ll just shrug.

“Be happy, have a good attitude, work hard and try to be easy-going,” he says, simply. “Things are going to happen; take it in stride, give it to the Lord and let go.”

Joseph Neal Anderson was born Sept. 11, 1920, to Eva Ried and Benjamin Franklin Anderson in the couple’s grocery store in Juno, Tenn. Smack in the middle of six children, he balanced the genders 50/50. Times were hard and despite having what would be called an essential business, things were lean.

“I remember growing up during the Depression, everyone trying to find work and feed their families,” he says. “I was really just a country boy growing up in some hard times.”

Drafted into World War II in 1944, Anderson served in the Army’s 167th Regiment in the South Pacific Theatre, Mindanao, Philippines. As a sniper, he and his unit were tasked with clearing the Philippine Islands of the enemy. Like many of the Greatest Generation, the war was a defining experience of his life.

“The military taught me to be more observant. And that everyone has the internal good versus evil struggle,” he says. “It was hard leaving my family, but I knew I was doing what was right by serving my country.”

Anderson’s hitch ended in 1946 and the corporal, decorated with the Combat Infantry Badge, Philippines Liberation Ribbon and Asiatic-Pacific Theatre Service Medal, came home to the South to make a living and start a family. The former took several forms over the years — Anderson worked in his parent’s store, helped build a railroad, hired on at a cattle operation and bought and sold timber.

The latter goal he achieved by winning the hand of Lillian Mae Gatlin. The couple had three children, providing for whom served as Anderson’s motivation in life from then on.

“Getting married and having children was great, and my wife and I were so happy when each of them had their children,” he says. “I was always proud to have a job by which I could provide for my growing family.”

Life eventually brought the Andersons to Lonoke, where he came to work on a fish farm, which was more stable than some jobs and didn’t require as much time away from home. Today, his sons have built a fish farming business from the ground up, something he notes with pride given that he knows from personal experience how tough that work is.

“Minnow farming has come a long way with new technology for figuring out fish diseases, but it is still and will always be a very hard job,” he says. “You have to put in a lot of work, hard labor. It’s definitely not for everyone.” 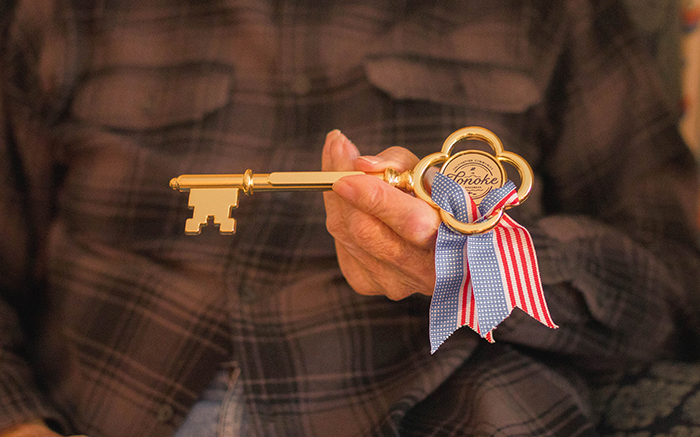 Anderson’s key to the city of Lonoke.

As committed as he was to his work, Anderson also found time to enjoy life. An avid deer hunter, he also took great delight in keeping and training bird dogs. Gardening, fishing and even a little gambling also found their way into his spare time.

Neal Anderson says faith is an essential component to a happy life, no matter how long it is. His favorite Bible verse comes from Romans: “And we know that in all things God works for the good of those who love him, who have been called according to his purpose.” Romans 8:28

But at the heart of everything was his family, which today has grown to include seven grandchildren and 14 great-grandchildren, who know him for his trademark phrase, “Well, golly bill,” and his generous heart.

“One thing I have always been very proud of was when I built my granddaughter, Tracey, a playhouse,” he says. “It was big and had windows and a porch. She played in there all the time. It was special to me.”

As for the many innovations and developments he’s seen over ten decades, Anderson says the march of progress boggles the mind. 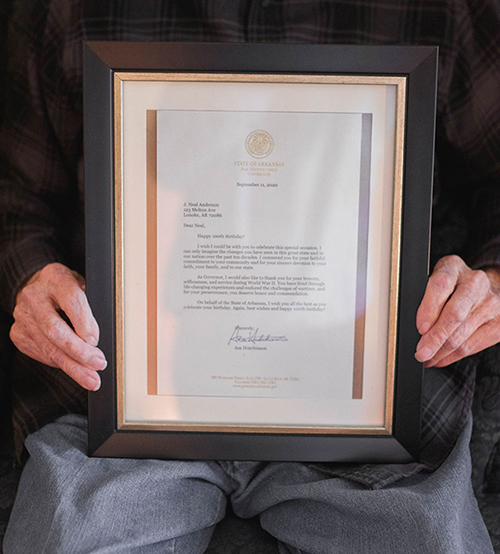 Gov. Asa Hutchinson sent Anderson a personalized letter for his 100th birthday this year, on Sept. 11.

“It’s been amazing seeing how our world is developing and all the change it creates,” he says. “I think I’ve seen a lot over my 100 years, and every day can bring something new if you just look for it.

“There has been so much that has happened, wars, new diseases, computers, the internet. I would say the biggest downfall is all the buildings. All this change brings more business in and then people to work in them which in turn leads to more houses being built and more roads. While it is amazing, it is invading on the forests and all the wildlife. Mother Nature intended there to be a balance, and we are losing some of that.”

Through it all, Anderson has tried to keep pace with the best of the times, including now when he carries a smartphone that he doesn’t completely understand but enjoys for it delivering him pictures of his great-grandchildren. He also says what was true in his youth has ripened into the moral of his life.

“Not everyone feels the same as you,” he says. “Everyone is different, but at our core, we really all want the same things, right? Happiness, love, a family and to be respected as a human being. Life can be hard, so find your people and don’t let go. The people who love you will always be there to lift you up and to lend a hand when you need it. If you work hard, you will feel better about yourself — especially if you try to find something every day that makes you smile.”