A Sweet Idea, A Simple Cause 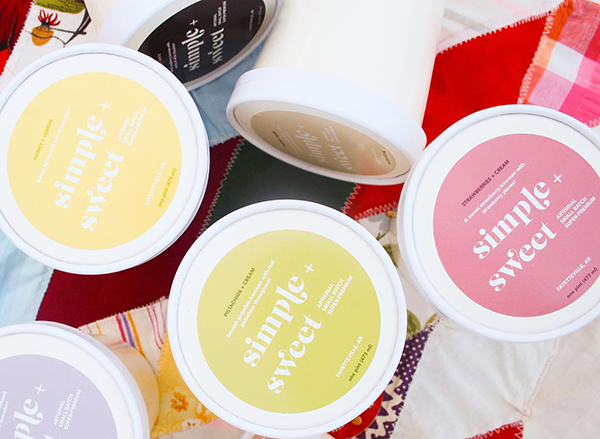 A Sweet Idea, A Simple Cause

Every small business has its struggles, its ups and downs, especially in the wake of the pandemic. The story of Simple + Sweet Creamery, however, is a particularly chaotic and lucky one, a true success despite the odds. Co-founder Coleman Warren recently graduated from the University of Arkansas at Fayetteville and is a newlywed, so in many ways, his story is just beginning. But the story of Simple + Sweet begins a few years prior, in 2019.

A native of Farmington, a suburb of Fayetteville, Warren and his now-wife, Bailee King, had joined a program with AmeriCorp VISTA that put them in Omaha, Nebraska, helping a food bank with its summer meal program. 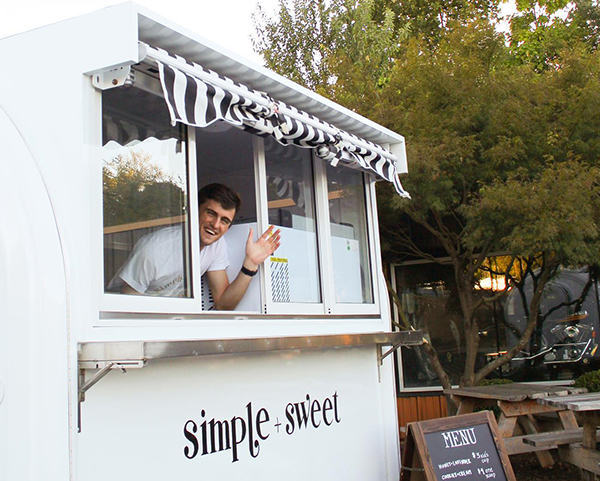 Their job was to help the kids come back “for more than just food,” making sure the kids had fun and getting to know them. But as he worked to help feed over 600 children a day, Warren began to realize that there were many more who were hungry and in need than just the ones he was seeing, and that his home state was worse off than Nebraska.

Arkansas has one of the worst rates of food insecurity in the country, with around 25% of the state’s children facing hunger, according to the Arkansas Foodbank, and that rate is even higher in rural areas. 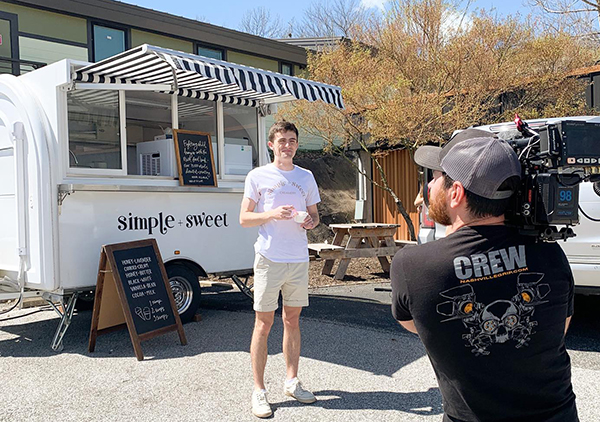 Simple + Sweet was featured on Good Morning America in April 2022.

“I started asking questions like, ‘Is poverty someone’s decision? What causes poverty, and how do you overcome it?’”

Warren decided in the end that it simply was not the fault of the children, and he became convinced that food is a right, not a privilege. From that point, he devoted his life to fighting hunger.

While in Omaha, he noticed something else: The local ice cream was unlike any he had ever had back home in Northwest Arkansas, as artisanal ice cream producers did not really exist in the area.

“I came home, and I was telling people about two things,” Warren said. “Food insecurity and how it’s a problem that we need to be working as a community to address, and this really good ice cream that I had and how I wish we had it in Fayetteville.”

There were already many great nonprofits in Northwest Arkansas, and Warren didn’t want to pull any resources away from them “for some vanity project.” So, he and his co-founder and best friend, Tanner Green, came up with Simple + Sweet Creamery instead, producing the artisan ice cream that Fayetteville lacked and forming an official partnership with the Northwest Arkansas Food Bank. So far, together, they have donated about 36,000 meals.

Warren and his team learned the art of fine ice cream from Neil McWilliams — former president of the North American Ice Cream Retailers Association, who at that time lived in Mammoth Spring, Arkansas — and returned home with 36 gallons of homemade ice cream.

The team planned to launch Simple + Sweet in the summer of 2020, but, things did not quite go to plan. 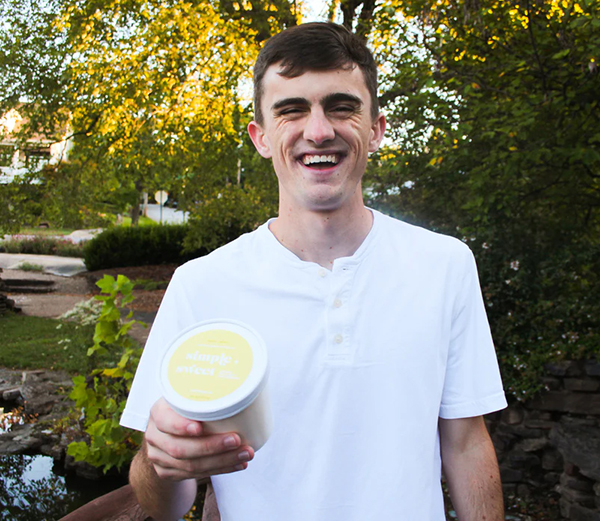 “We had given away about six gallons on campus right before the pandemic hit. So now I’ve got 30 gallons of ice cream that I’ve got no idea what to do with, and they’re going to go bad if I don’t sell them within the next three months,” Warren recalled.

So, they bought some small paper containers, put stickers on them, and listed them online for local delivery. All 30 gallons were sold out within 24 hours.

Despite a promising start, with the pandemic in full swing, the Simple + Sweet team had to temporarily give up their dream of a brick-and-mortar location, leaving delivery as the primary method of distribution. As Warren readily admits, delivery is simply not the way people tend to or want to buy ice cream, but it was the only option they had.

There were other roadblocks to starting the ice cream business. To keep making the products, the team needed an ice cream machine, but a brand new one would cost $28,000. A blast freezer is another necessity but it would cost another $10,000 and was five months on backorder. Between all of this and the pandemic, Warren began to lose hope that Simple + Sweet Creamery would ever really happen.

Yet it seemed that luck was on their side, and the team managed to find the equipment they needed at a good price. They then rented a kitchen from the Farmington School District where they continue to make their ice cream. 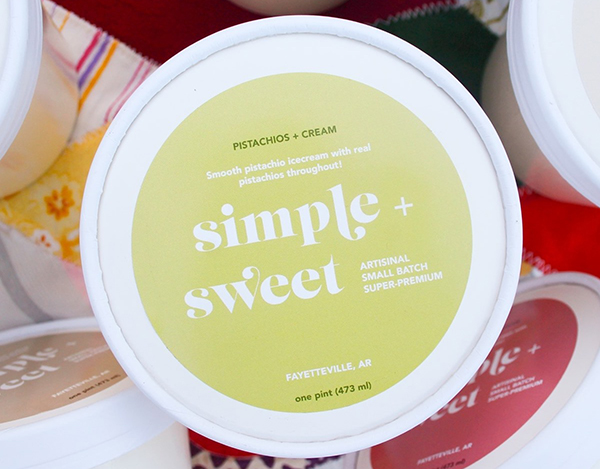 Individual pints can be purchased on Simple + Sweet’s website for only $7 each.

Since Simple + Sweet’s humble beginnings, it’s gotten a lot of attention. In 2021, the team competed in the Arkansas Governor’s Cup Collegiate Business Plan Competition, which is only for Arkansas students. The small business came in first place, winning $15,000 in prize money, which was used to purchase a trailer. However, that became an ordeal when the delivery of the trailer was delayed by three months and then was finally delivered to Memphis instead of Fayetteville.

By then, the prime ice cream season of summer had passed entirely, leading to what Warren called “the rainiest October I’ve ever seen” –– hardly optimal conditions for an ice-cream truck.

But good luck came again in the spring. In March, the team won the Undergraduate Business Plan Competition, hosted by the University of Manitoba, winning $10,000 that helped make up for the losses caused by the food truck delay and allowed them to improve the trailer and hire new people. The team relaunched with the trailer in April and saw great success in going to events and bringing the ice cream to people, rather than having people come to the ice cream. That same month, the team was featured on a segment of “Good Morning America,” which gifted Warren $5,000 and gave 20,000 pounds of food — which Warren said was the much more exciting part — to the Northwest Arkansas Food Bank.

Although the future is looking bright for Simple + Sweet Creamery, Warren is getting ready to pass the torch. For now, the Truman Scholarship has taken him to Washington, D.C., for an internship with Growing Hope Globally –– an organization that, like Warren, is dedicated to fighting hunger across the world. As a result, he now just manages the bookkeeping for the company, while the new employees take care of the day-to-day business of making and selling ice cream. The Rhodes Scholarship will soon be taking Warren even further afield, as he and Bailee will be moving to England so he can attend graduate school at Oxford University. Warren will continue to be involved, but someone else will be running the show. His wife, who has been the company’s creative director, is leaving the role to be taken over by her brother. 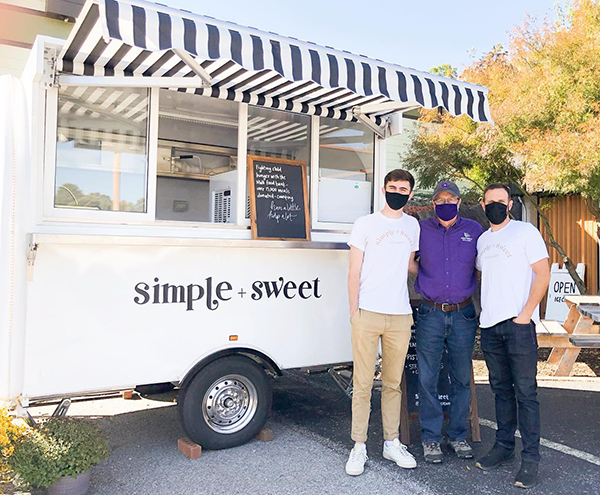 Simple + Sweet Creamery is planning to phase out online delivery in hopes of getting its ice cream stocked on grocery store shelves instead, and Warren still has a vision for a brick-and-mortar location someday. But for now, you can order a pint from the company’s website (simple-sweet.com), if you’re within 10 miles of Fayetteville, or find where the food truck will be next.

The company’s open secret to delicious ice cream is using 14% butter fat content, making it far creamier than your standard ice cream. Fortune favors the bold, and the team has certainly gotten bold with some of their ice cream flavors. Honey lavender is a staple of artisan ice cream shops, but Simple + Sweet has also made some more unusual things based on what happens to be in season, like blueberry and goat cheese or sweet basil and olive oil, which have proven to be great sellers. All the small business’ ice cream is handmade in small, four-gallon batches, using Highland Dairy milk and locally sourced ingredients, often from Fayetteville’s Farmers Market. The team slices the strawberries for their strawberry ice cream, and they crush the Oreos used in their cookies + cream. Everything is real and fresh. And most importantly, it all helps children in Northwest Arkansas.  And it can’t be a guilty pleasure if it’s for such a good cause, right?