A Walk on the Wild Side: From the Capital Hotel to the Country with Georgia Pellegrini

Author, TV host, chef and hunter Georgia Pellegrini is bringing 16 women from across the nation to Arkansas from Sept. 21 to 24 for a long weekend full of adventure in the city and the country.

[dropcap]S[/dropcap]he has hosted more than a dozen Adventure Getaways — at least 16, she says, but this is the first in Arkansas, although she is no stranger to the state. The number of trips is “hard to count at this point,” but she’s been doing them since 2011.

Women from all over the United States — and all over the world — have come along on these events, Pellegrini says. One woman came from as far as South Korea to go on an Adventure Getaway.

“They’ve taken on a life of their own,” Pellegrini says of the trips.

Other getaways have been held in Virginia, Montana, Georgia, Wyoming, Wisconsin and Texas. For this trip, most of the women are traveling from out-of-state, but one Arkansan will take part.

Many of the women on Pellegrini’s trips have followed her to more than one place. She says about 50 percent of the women going on the Arkansas Adventure Getaway have been on a trip with her before.

“Year after year, people come back because of the experience itself,” she says. “What’s so special about it is they create this network of lifelong friends.”

One of the women traveling with Pellegrini for a second time is Valerie Cozart of Raleigh, North Carolina. This getaway will be her first visit to Arkansas. 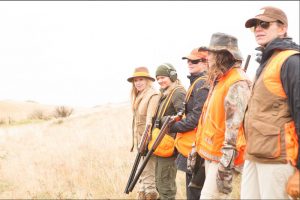 Whether Pellegrini’s guests are from the city or the country, they get a taste of the freedom of the outdoors on the weekends away. Photo by Kelly Turso

“I just booked my flight this morning. I’ve never been to Arkansas, so I’m excited,” she says. Arkansas has been on her list to visit; Cozart wants to visit all 50 states and this trip gets her one step closer. Plus, it’s a trip with Pellegrini.

“I would follow Georgia anywhere,” Cozart says.
Cozart’s previous trip with Pellegrini was a 2014 getaway to Montana, where she says she made several good friends and one great one.

Pellegrini says the women who go on the getaways make connections with women who have “similar interests” and “similar spirits.” When they go on these trips, they’re “doing something for themselves, stepping outside their comfort zone and supporting each other in the process,” Pellegrini says.

The experience can be empowering and different from their everyday life, the hunter says.

Cozart went on the Montana trip alone, and plans to go alone on the Arkansas trip as well. Some women go on the trips in small groups of two or three, Cozart says, but she likes going alone and then making friends during the event.

Cozart says it’s a different experience to go to the airport by yourself, rent a car and find where you’re staying — all without someone else. She says she’s found that she kind of likes being alone with strangers.

Lynn Hendricks of Dallas, Texas, is another Adventure Getaway alumna who is attending the Arkansas event. She’ll drive up from Texas to go to Little Rock. Like Pellegrini, she’s no stranger to the Natural State; she has family in Bentonville, Little Rock and Jonesboro.

Her first getaway with Pellegrini was at Brush Creek Ranch in Wyoming in 2015. That year, she and her mother celebrated their birthdays with the trip.

As Adventure Getaway alumni, Hendricks and Cozart are no strangers to hunting.

Before Montana, Cozart hadn’t really been hunting. “I killed a lot of clay pigeons before the trip,” she says.

“Women are the fastest-growing demographic in the hunting base,” Pellegrini says. If women get involved, Pellegrini believes that their kids will get more involved too.

After the hunt, Pellegrini teaches the women to clean and prepare the game they have killed. Photo by Kelly Turso

THE ADVENTURE DAY ONE

Guests won’t just hunt during the long weekend. On Thursday afternoon, the adventurers will check into the Capital Hotel and tour downtown Little Rock on a trolley with an “expert guide,” according to the itinerary.

After the tour, they’ll head to the SoMa district for a mixology and shrub-making class led by Chef Matt Bell. Bell will also host a “wild game feast.” After dinner, the women will get to see a show: a concert from the Oxford American magazine that’s part of the publication’s music series.

Friday morning, the ladies will be the first guests at the new Arkansas Game and Fish Commission shooting range. For lunch, Pellegrini will lead “a wild game cooking demonstration.” In the afternoon, the group will go fishing and in the evening, things will get a bit fancier. The women will visit Marlsgate Plantation in Scott for hors d’oeuvres, a tour and dinner.

Saturday morning will be an early start. They’ll go teal and dove hunting on private land with guides from Game and Fish who will lead the hunt. After the hunt, Pellegrini will show everyone how to field dress the birds.

That’s all before lunch, which will take place at Charlotte’s Eats & Sweets in Keo. Since Charlotte’s coconut pie was named one of the best pies in the South by Southern Living magazine, the adventurers might pick up a piece or two while they’re there. Then it’s off to Stuttgart — otherwise known as the duck capital of the world — for duck-calling lessons from Rich-N-Tone Calls. The women will head back for an afternoon hunt, then they’ll return to the Capital Hotel. Before dinner, the women will have a jewelry-making workshop with Bella Vita Jewelry, where they’ll turn the feathers from their hunt into accessories. The day will end with a wild game dinner in the wine cellar of the Capital Hotel.

On the final day of the weekend, the ladies will get in one last adventure before heading to the airport. They’ll drive to Pinnacle Mountain, where they’ll attend a guided nature meditation and canoe down a water trail at Pinnacle Mountain with “expert wildlife conservationists.”

“I’ve never been duck hunting before and am excited to try it,” Hendricks says. “Georgia teaches each person along the way and takes a genuine interest in where each lady is, what they want to learn and how they might want to grow and expand their horizons!”

“I’m excited to be working with local producers and artisans and craftsmen and businesses because I think it’s always great to celebrate the place you’re in and the context of it all,” she says.

For Ralston Family Farms, a new rice producer in Atkins, Arkansas, Pellegrini likes that she’ll be able to incorporate the culinary elements of the trip into the hunting element and demonstrate the symbiotic relationship between wildlife and agriculture.

Pellegrini says she’s grateful to the Capital Hotel for hosting the event and to the private landowners who are letting the women use their property. The Game and Fish Commission has been wonderful about “recognizing the opportunity” for women.

Planning this trip was more difficult than organizing her other Adventure Getaways, she says.

“I’ve done it around the country. You have to really know people in Arkansas personally. It’s taken me about nine months to network and convince people to open up their places.”

“I’ve literally been driving up and down the state, turning over every rock,” she says.

“It was very different,” she says. “It’s the hardest it’s ever been. But I was determined.”

There’s a reason for that determination.

“I started to learn to hunt in Arkansas and subsequently wrote about it in my second book, so I thought this would be a great place to feature all the raw nature that’s in the state that a lot of states don’t have anymore,” she says.

“If you want to advertise Arkansas as the Natural State, you need to have an inviting place where outsiders, especially women, can go and stay and have a true outdoor hunting and fishing experience,” she says.
Pellegrini’s next Adventure Getaway is set for Montana in 2018. She doesn’t count out coming back to Arkansas for another getaway at some point.

People can follow along on the Adventure Getaway through Facebook and Instagram at @georgiapellegrini and online at aymag.com. To learn more about next year’s trip, visit www.georgiapellegrini.com. 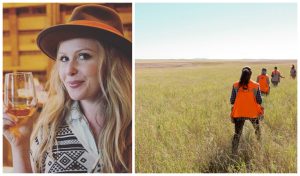 Pellegrini’s Adventure Getaways are an artful combination of roughing it and relaxing. Photos by Kelly Turso