A Weekend Of Love

Whether it’s the rich aroma of sweet chocolate or fresh mountain breezes and scents of cooked ribeye and chicken, love is in the air in Arkansas this Valentine’s Day weekend.

And, despite the Natural State’s next-to-last ranking as one of the least amorous states in the country by Wallethub.com, a website that ranks everything from the best states to be born and the best states to retire, Arkansans still lead with their hearts. Eureka Springs and Petit Jean Mountain State Park will host two long-running traditions of love. (Florida, by the way, ranked first in Wallethub’s ratings. Arkansas bested West Virginia for 49th place.)

Eureka Springs, an eclectic Carroll County mountain town of 2,000, the Chamber of Commerce will hold its 16th annual Chocolate Lover’s Festival and Emporium from 10 a.m. to 3 p.m. on Saturday, Feb. 15, in the community center. 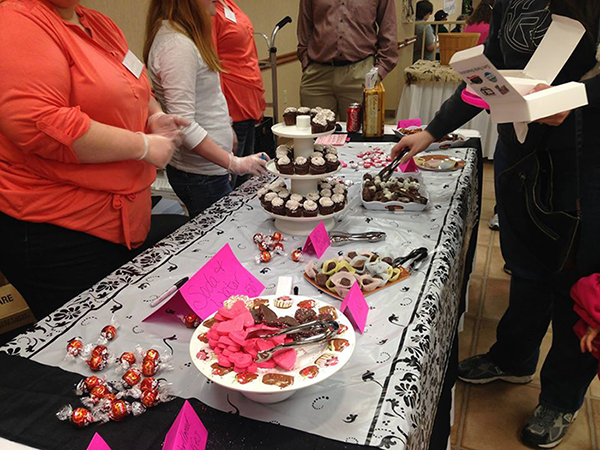 Vendors expect to hand out more than 2,000 pieces of candies for visitors to sample.

Chocolate has always been associated with love and seduction. It’s not just a last-minute, rushed purchase by a man to appease his sweetheart, but instead a symbol of love and respect for centuries.

It was a highly sought out treat among Mayan and Aztec elites. Cacao beans were deemed nearly as valuable as gold and were used to pay taxes levied by Aztec leaders.

According to the Smithsonian Institute, chocolate houses in London began rivaling coffee houses in the 1600s as social gathering spots. Louis IV drank it every day and Madame du Barry was said to use chocolate mixed with amber to stimulate her lovers, the Smithsonian reported.

The custom of giving chocolates for Valentine’s Day grew when Richard Cadbury, a British man who manufactured chocolate, packaged leftover cocoa butter in heart-shaped boxes festooned with Cupids and rosebuds in 1861.

In 1907, U.S. chocolate magnate Milton Hershey made tear-drop shaped “kisses,” called that because of the smooching noise the candy kisses made when manufactured. Twenty years later, Russell Stover began selling its Valentine’s candies in boxes covered with satin and lace and the tradition grew. 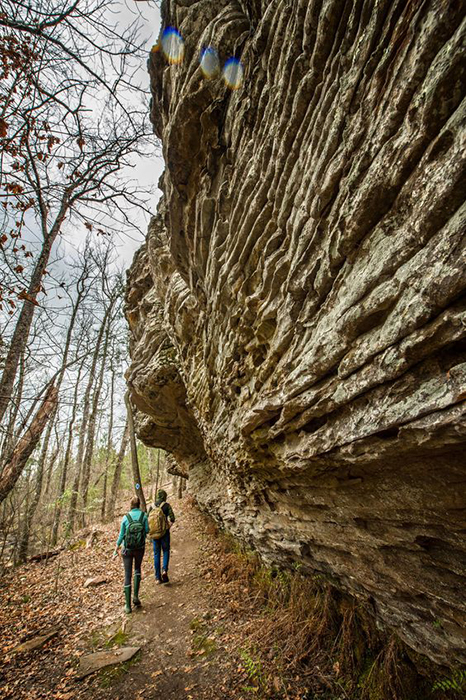 Today, in Arkansas, Eureka’s festival is a popular venue.

The venue is also a magnet for newlyweds and those planning to wed. The Crescent Hotel and Spa features a photographic backdrop of a large crescent moon at the venue for couples.

The quirky town itself is a romantic place, she goes on to say. Nestled in the foothills of the Ozarks, Eureka Springs’ Victorian-style houses and quaint sidewalk strolls offer plenty of romantic scenes. The town is also the host of the Great Passion Play and the Annual Ozark Mountain UFO Conference — a varied choice of events if there ever was one.

“It’s a unique town,” she says. “Everybody accepts everybody here. We have parades for everything. If you find only one sock left in your dryer, we’ll hold a parade.” 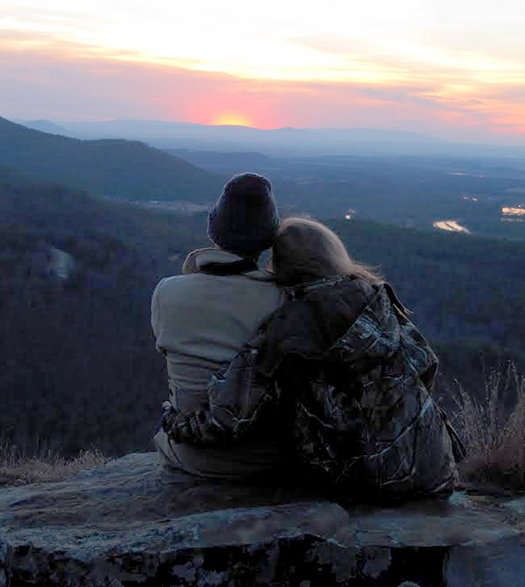 Marlowe says Eureka Springs is known as the “Wedding Capital of the South” because there is no waiting period between obtaining a marriage license and getting hitched.

“You can wake up, get a license and get married,” she says. “This is like Las Vegas. There are wedding chapels all over town.”

(Love) legend has it that there have been proposals and acceptances at the Chocolate Lover’s Festival and Emporium.

Further south, it’s a case of love at first hike atop Petit Jean Mountain each Valentine’s, when the state park hosts its “Hikes, Hearts and Hugs” weekend. The event begins at 4 p.m. on Friday, Feb. 14, with a 2.5-mile hike for couples on its Rim Trail. The leisurely walk, led by park interpreter  B.T. Jones, leads through some of the most scenic and overlooked areas of the park.

A Sweetheart’s Dinner follows from 5 p.m. to 8 p.m. at the Mather Lodge Restaurant. The cost for the dinner is $85 per couple and includes a Greek tomato cucumber salad and a choice of a 10-ounce hand-cut ribeye or chicken roulade rolled with spinach and artichoke and topped with a creamy cheese sauce. Both meals also come with a loaded baked potato, roasted asparagus and a side salad.

The Lance Family will provide folk music after the dinner. 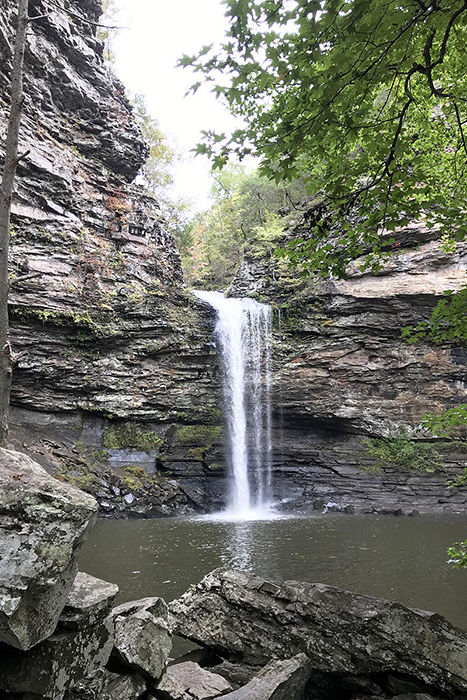 Hikes resume on Saturday, Feb. 15, with a 9:30 a.m. 2-mile hike on the Cedar Falls trail, one of the most romantic locations in the park by the foot of the waterfall. Another hike will begin at 1 p.m. Saturday at Stout’s Point where Jones will lead hikers to a couple of the lesser known sites in the area — the YMCA “College Lodge” and the area where the Hotel Petit Jean was once located.

At 3:30 p.m., Saturday, Feb. 15, park interpreter Carrie Saunders will meet with visitors at Mather Lodge to discuss the romantic legend of the naming of Petit Jean Mountain. Saunders will then lead hikers to the CCC Overlook on Red Bluff Drive to watch the sunset from the scenic spot and at 6:30 p.m. park interpreters will hold their version of the “Newlywed Game” for couples in the Legacy Room of Mather Lodge.

Hiking picks up at 9 a.m. Sunday with a walk among slot canyons and stone pillars to Bear Cave and at 11 a.m., the event concludes with a discussion about the culture that created the park’s rock art.

The Valentine’s Day hikes have been held at Petit Jean Mountain State Park since the 1980s. It was a marketing idea to introduce people to hiking and the park.

“This is a beautiful place,” Jones says. “We’ve had a lot of people come here to propose. They go hiking and pop the question. It happens all the time.”

Others celebrate their wedding anniversaries, honeymoons and marriage events at the park, he adds.

The park is named for one of the more romantic legends of the state. When a young French nobleman engaged to be married was granted permission to explore a part of the Louisiana Territory in the 1700s, his sweetheart disguised herself as a boy and applied with the ship’s captain to be part of the voyage so she could be with her fiancé.

The ship crossed the Atlantic and entered the Gulf of Mexico where it ascended up the Mississippi River and then eventually the Arkansas River. The voyage stopped at a large mountain and travelers were welcomed by Native Americans who lived there.

After spending the summer there, the “cabin boy,” who maintained her disguise the entire time, fell gravely ill. She revealed herself to her fiancé and said she knew she could not make the trip back to France. She asked to be buried on the mountain top that now bears her name — Petit Jean.

A site believed to be her grave is marked at the park now and is a place where marriage proposals are often made, Jones says.