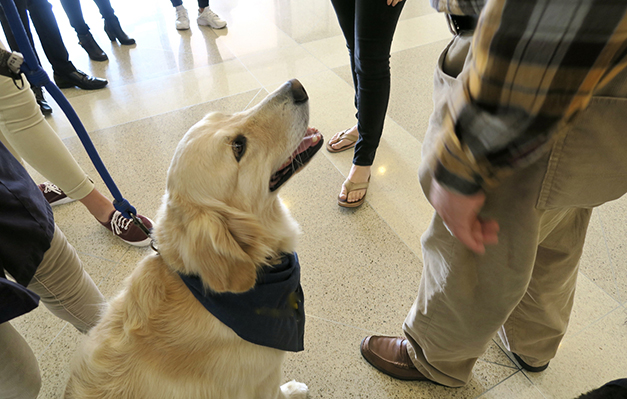 Ever stepped off a plane from a long flight and needed something to lift your mood?
ABLEPaws, a Little Rock-based Pet Partners Community Group, now has therapy dogs at the Clinton National Airport! This new program launched July 2018 and is called Bow Wow Buddies.
“We can go all the way down to the gate,” says ABLEPaws’ public relations coordinator Nancy Rowan. “We have our clearance badges so we walk up and down the concourse and just visit with people, and it’s amazing how many people are so happy to see the dogs.”
Rowan says that people are sometimes hesitant about petting the dogs because they think the dogs may be there for other reasons.
“The dogs there wear vests with their names on it that say, ‘pet me’,” says Rowan. “They think they’re like service dogs or drug dogs or something that and they’re not supposed to approach and then when they realized they can pet them, it’s like their whole world changes.”
Mary Armstrong, president of ABLEPaws, says that the Clinton National Airport has worked with ABLEPaws since the beginning to provide the therapy services.
“We just can’t say enough for how much the airport has worked on this,” says Mary. “We started talking with them December of 2017. They worked diligently to get policies and procedures in place.”
ABLEPaws, or Animals Brighten Lives Everywhere, has brought therapy dogs to hospitals, schools and other facilities and events in Central Arkansas for over 16 years.
“When schools are going to have their exams, they have anywhere from two to six of our dogs and teams go in at a certain time frame and then they let the students know that we’re there,” says Rowan. “Kids come from every direction, like a hundred kids come and they just sit on the floor, pet the dogs and take a break from studying for their exams.”
ABLEPaws is a 501(c)(3) non-profit group with their mission to “bring hope, comfort and healing to others through the human/animal bond.”
“It brings a lot of happiness to people in situations we don’t even know anything about,” says Armstrong.
Click here for more information
READ MORE: Arkansas’ Best Breakfast Spots