All Rise for Serenity Farm Bread 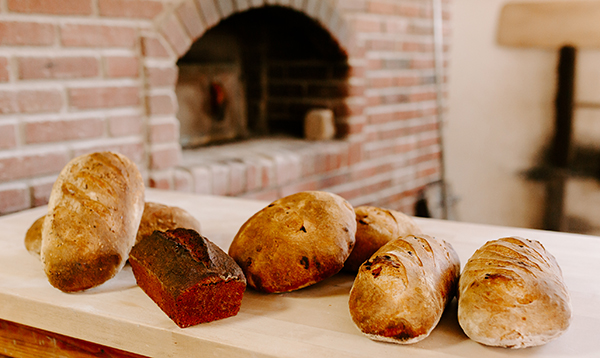 Other than using an electric mixer and a cooler, the workers at Serenity Farm Bread in Leslie could make their sourdough bread with no power.

It’s fitting the company is in a rural northern Arkansas town that was a popular site for a “back to the land” campaign created in the 1970s when folks shunned mechanization and grew their own foods. 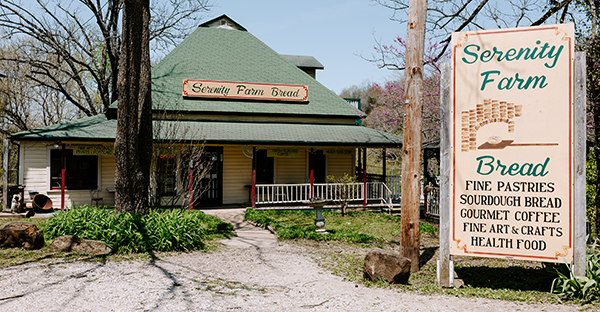 Serenity Farm Bread has been making its breads for 30 years now; employees knead the ingredients by hand, cook the dough in a brick oven fueled by burning firewood and set the finished loaves on racks in the flour-covered work area.

“It’s so low-tech here,” says co-owner Adrienne Freeman. “We could finish the product after using the [electric] mixer if we were without power.”

The concept has worked for three decades. Serenity Farm Bread has sold its breads from the bakery on AR 66 in downtown Leslie since 1992, and at its pastry shop on U.S. 65 just south of its intersection with 66. Some customers come to the store, but much of the sales come through orders across the country; Freeman says she’s sold bread to all states but Hawaii and Alaska — and that’s only because it takes longer than the maximum three days they allow to ship bread to those two states.

Tucked in the edge of the rolling Ozarks, Leslie is somewhat obscure. The locals refer to their town as “Arkansas’ hidden secret” or even “Mayberry,” in reference to the fictionalized town made popular by The Andy Griffith Show that featured down-home, trustworthy residents.

As an example of that trustworthiness, a clerk at the pastry shop recently told a customer who phoned in a large order that if she arrived after the store closed to pick up her goods, the clerk would merely leave them on the porch. 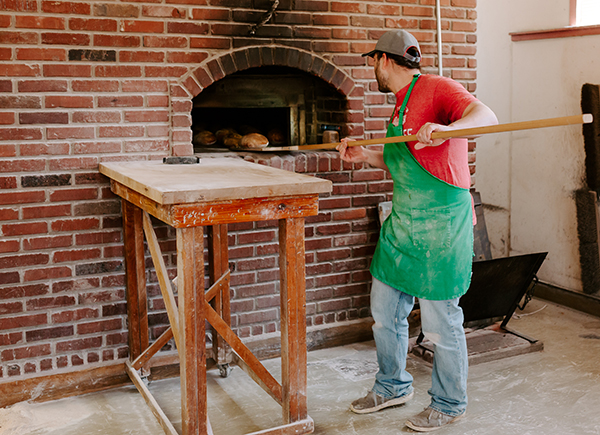 Even the pastry shop is a throwback to a bygone era. It’s housed in a 1920s Sears and Roebuck kit house, and the bakery is located in one of the town’s first brick buildings, which was built in 1907 and originally served as a bank.

Doug Wilson of Little Rock recently made the 90-mile trip to Leslie on a “whim” one day. Retired, Wilson headed out on his journey on a rainy day to eat at the Skylark Cafe in Leslie, and then to buy bread.

“I come here every so often,” he says. “I eat the bread for health. There’s this atmosphere here. There’s a homey feeling. It’s like coming home to rest.”

Leslie was incorporated in 1906, but even before that, it gained a reputation as a peace-seeking area. In the late 1850s, the area became a habitat for the Arkansas Peace Society, an anti-Civil War organization. In November 1861, Col. Sam Leslie of the 45th Arkansas Militia was ordered to arrest Union army sympathizers who moved there. Historians differ on whether Leslie was named for him or for his brother, “Old Jack” Leslie.

H.D. Williams Cooperage Co. moved to Leslie from Poplar Bluff, Missouri, in 1906, and became the largest barrel producer in the world. The town thrived; at one point early in the century, there were nearly 10,000 living in and around Leslie.

But then Prohibition happened, and the barrels, used mostly by whiskey makers, were no longer needed and people moved away.

In the 1970s, though, the area had a rebirth, of sorts. Advertisements in Mother Earth News magazine created a movement that focused on living off the land and rejecting mass production. The ads featured Leslie as a place with plenty of land and little industry. A utopia, if you will. About 350 live there now. 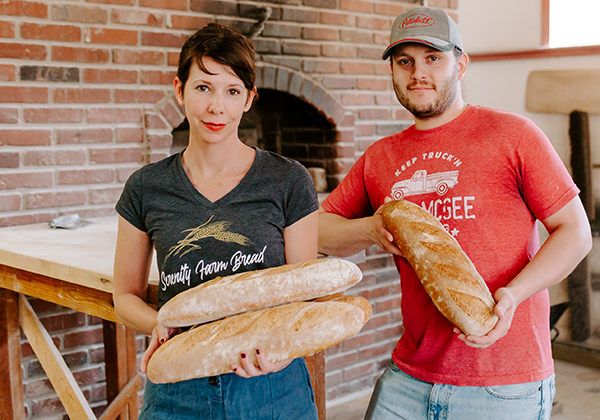 Both the parents of Freeman and Daniel Burlison, her partner, moved to Leslie in the 1970s from California and New Mexico.

“We’re not about industrialization,” Freeman says. “We’ve seen how the mass-production of bread has caused health conditions. Bread must be fermented, and that takes time. Carbs need to be partially digested by bacteria when fermenting before you eat them.

“We nourish people with our bread. We don’t just feed them.”

The business began in 1992 when Dr. Morris Keller, a Dallas podiatrist, opened Serenity Farm Bread, touting the healthy benefits of the sourdough breads he made. At that time, there were only three shops in the country that made that kind of bread.

“This is the way people began making bread since ancient Egypt,” he says of their process. 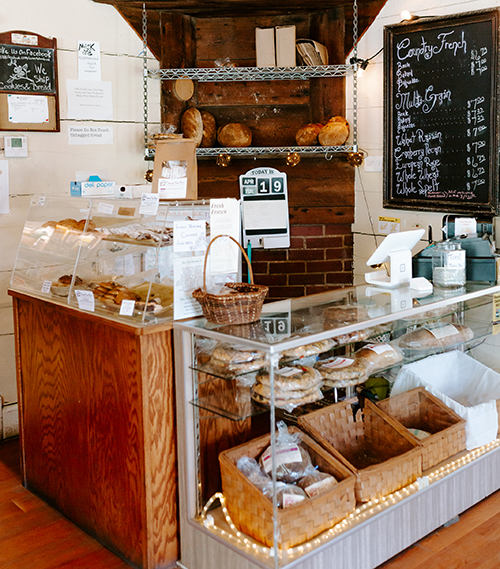 In January, Food and Wine magazine named Serenity Farm Bread as the best bread-making company in the state. The magazine listed similar companies in all 50 states. Many were chosen from larger cities. In Hawaii, for example, a shop in Honolulu was named the best in that state. Florida’s was in Tampa. A shop in Evanston, Illinois, a northern suburb of Chicago, was chosen as Illinois’ best bread-maker. Minnesota’s was in Minneapolis.

And then, there was tiny Leslie representing Arkansas.

“There are enough health nuts, hippies and other assorted converts to keep the business alive through many owners,” the magazine wrote about Serenity Farm Bread. “[Freeman and Burlison] inherited … a pretty darn loyal clientele, who stop in for all classic favorites, along with more experimental loaves like molasses rye loaf brightened up with a hint of orange.

“Far from your average morning piece of toast.”

Freeman says of the review, “We had no idea about that.”

She received a very early morning text from someone who saw the Food and Wine article. She was already at work.

The day does start early at Serenity Farm Bread.

The baker arrives at 2 a.m. each day to fire up the brick oven and get it ready for baking. He then mixes about 100 pounds of sourdough to be used for the various types of bread.

Freeman comes in at 5 a.m. and weighs the loaves for baking. A 1.5-pound loaf takes about 40 minutes to bake. A 3-pound loaf needs 50 minutes in the oven, and it takes about an hour and a half to bake a 4-pound loaf.

She also prepares orders for shipping with UPS; tucked in the corner of her small office are dozens of shipping boxes.

They have to maintain the temperatures of the oven and of the bakery once the bread is out and cooling. Generally, temperatures between 74 and 76 are preferred. It’s difficult, Burlison says, on winter days when it’s much colder. If it’s too cold, the bacteria slows in eating microbes in the fermenting process. When it’s too warm, the bacteria “eats faster.”

“After a while, you get a feel for the temperature,” says Burlison, who, like Freeman, worked at the bread company before becoming a co-owner. “There’s science and there’s intuition. We fire up the oven in the winter and use ice water in the summer.”

“It’s like a game of musical chairs,” he says. ‘We do things to keep it right.”

In all, they make four main varieties. The Country French is the most popular sourdough. They also experiment with flavors. They feature cranberry pecan breads, sunflower-seeded breads and blueberry-laced loaves.

Downtown Leslie is deemed a historical area; visitors stroll the main street, shopping in an antique store next door and stop in to see the bakery’s famed oven.

At least they used to. The front entrance to the bakery is now cordoned off with construction fencing. More than a year ago, a log truck barreling down the steep incline of AR 66 couldn’t negotiate the turn onto the street. The cab turned, but the trailer carrying the lumber locked up, sliding into the building and knocking two brick pillars off the entryway. 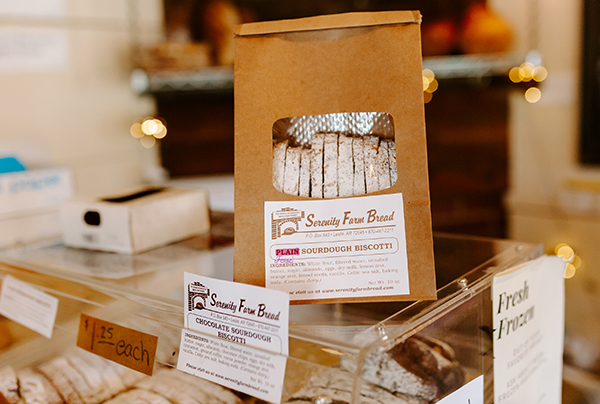 Burlison was within 20 feet of the pillars when it was struck.

“All I could see was the tail end of the truck,” he says. “The pillars were there. And then they were crumpled.”

No one was hurt and the bread production continued. As testament to the strength of the building’s foundation, Freeman was in her office about 100 feet away. She saw the speeding truck roaring down the hill outside her window and heard the “boom” of the collision, but didn’t feel any shaking.

It was the second time the building was hit by a truck in three years.

Burlison says he just received the bricks to replace the pillars, and repair work should begin shortly.

Serenity Farm Bread received the Business of the Year award in 2019 from the Greater Searcy Chamber of Commerce.

“It’s been well known for a long time that Serenity was one of the best Searcy County businesses,” Chamber Director Darryl Treat says. “We ride their coattails. They are the linchpin for Leslie and for our county.”

The town is a draw for the annual 1.5 million tourists who visit the Buffalo River about 20 miles away and for those who travel to Branson, Missouri.

“We have a fabulous little town,” Treat says of Leslie. “The town is on an upswing. It’s a spark of energy for the rest of us. Leslie is a little slice of Americana.

“You have the structure of an authentic, quaint Ozark Mountain town and you have convenient transportation there.”

“Once you go there, an awful lot come back.”