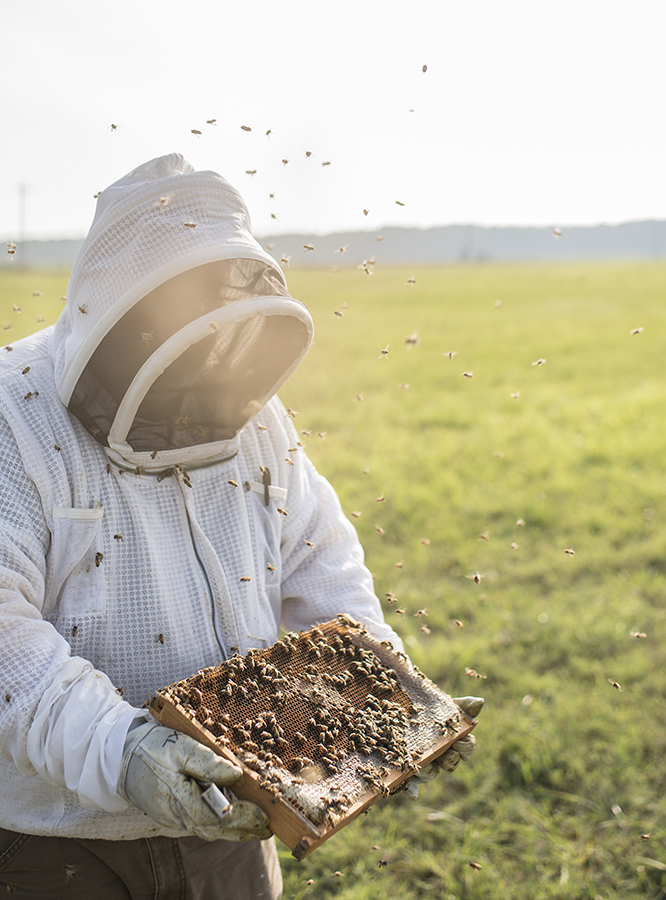 If you haven’t heard the buzz, beekeeping is experiencing a boom in popularity across the country and in the Natural State. This labor-intensive (and sometimes painful) but extremely rewarding hobby has taken flight at a critical time. That’s because bees, nature’s most efficient pollinator, have declined rapidly in population over the years. These tiny heroes of horticulture are facing a number of environmental obstacles that don’t appear to be going away any time soon.

Honey bees, though tiny, play an important role in making our food. Their decline poses a serious threat to American and global agriculture on a tremendous scale. According to a 2017 report from the Center for Biological Diversity, honeybees in America provide more than $3 billion in fruit-pollination services each year. Approximately 1 in 4 native bee species face possible extinction, and nearly half of all North American bee species are declining. Jon Zawislak, an apiculture instructor for the University of Arkansas’ Division of Agriculture, knows all too well the challenges facing the ever-important honey bee.

“The global movement of honey bees has put them into contact with exotic parasites and diseases, which have also been moved around,” says Zawislak. “Bees also face large scale-habitat changes. Fewer floral resources are available as formerly wild areas are converted to urban and agricultural use.

“Environmental pollution and pesticide exposure can also impact bee health,” he adds. “All of these factors combine to create a lot of stress on the bees, which weakens their immune systems and makes them more susceptible to pathogens with which they used to be able to cope.”

Zawislak believes recent increases in hobby beekeepers in Arkansas and across the United States is due, in large part, to those willing to answer the call and come to the aid of the bee. 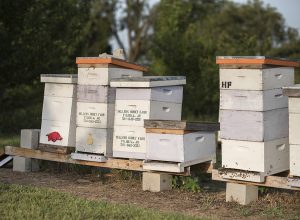 Beekeepers use boxes to house their hives.

The Business of Bees

John Smith, owner and operator of Central Beekeepers Supply in Russellville, has seen firsthand the rise of hobby beekeepers. That’s because he’s helped many of Arkansas’ newest beekeepers get started, selling them their first hive and the necessary equipment they need to get off the ground, even providing them with valuable advice from an industry veteran.

Smith is a second-generation beekeeper, having picked up the trade from his father, a World War II vet who kept bees as a hobby until a stroke left him unable to do so. That’s when Smith stepped in.

“My first initial thought was, ‘this is going to cost a fortune getting the equipment up to par,’” he says. “The shipping alone was outrageous. I knew a couple of beekeepers, so I decided I would buy enough supplies to sell at a cost to them that would offset my shipping.

“Well,” Smith adds, “those guys knew guys who kept bees, and those guys knew guys. Before long, I’m selling equipment out of my garage. I didn’t intend to be in the equipment business; I just wanted to keep bees.”
Before long, he’d outgrown his garage and moved into a metal building adjacent to his home. And he outgrew that building, too, struggling to keep up with the growing demand as the number of beekeepers climbed. In August 2017, he and his wife moved their business into a brand-new building off of Interstate 40. Bees, which had been a hobby, was now a fulltime job.

And business is still good.

“There is an increased popularity in beekeeping,” says Smith. “We’ve been on an uptrend since we started, and not because people just discovered us. These are people who are new to beekeeping. People have realized the importance of bees, what they bring… Any non-wind-blown crop has to be pollinated by insects. And the honeybee is the world’s most efficient pollinator.” 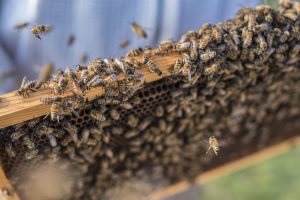 Honeybees build their combs inside of bee boxes.

According to Smith, no two Arkansas beekeepers are exactly alike. “We have people keeping bees from your factory worker to you judge, lawyer or doctor. And each and every one of them has a different reason for keeping bees.

“One guy may keep bees because his grandpa did, or his father did,” he adds. “Someone might keep them simply because his garden isn’t producing like it used to. There are people who come in, buy bees, put them in hives, expand the colony and never care about getting any honey. They want them for pollination. I’ve had people come in to buy bees who simply wanted to do their part, knowing that bees were suffering and in decline… Anybody can do it.”

John Martin, a Cabot-based beekeeper, started his first hive in 2015 after being introduced to the hobby by a neighbor. “Right away, I thought, ‘there’s no way I’m getting around any beehives,” he jokes. “But the more I thought about it, the more interested I got.”

Martin’s neighbor gave him his first hive that spring. Before the year ended, he had four. By the following spring, he was down to three. Now, Martin manages anywhere from 35 to 40 hives, while also working fulltime. “It’s a passion,” he says. “I wish I could do it for a living.” 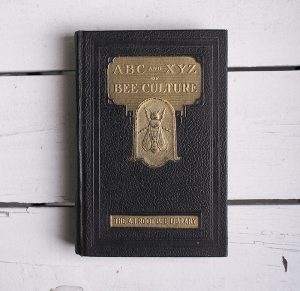 Beekeeping is often passed down through generations.

According to Martin, you don’t have to have a big bank account to become a beekeeper. But you do need a good work ethic.

“There’s the notion that you can just throw bees in a box and harvest honey at the end of the summer,” he says. “It doesn’t happen like that. In the springtime, the hives need to be checked every seven to ten days to make sure your queen has plenty of room to lay, looking for disease, making sure they’re healthy… It can be a lot of work.”

Smith agrees, adding that the first year of beekeeping is especially intense. “That’s when they need most of your attention as you expand them into a large colony. You have to check their space, add to their space. If they’re congested, they’ll swarm. They naturally divide… They’ll never out-populate their own resources.”

Zawislak believes beekeeping is one of the best ways for an individual to unplug and become in-tune with their natural surroundings.

“It’s a pleasant hobby for many that puts a person in touch with nature in a direct and immersive way,” he says. “Tending honey bees makes us intimately aware of complex connections across the environment. You can’t keep bees without becoming aware of every flower in bloom and wondering if it’s a good one for your beehives.

“Personally,” Zawislak adds, “I think it would improve society as a whole if more people would turn off their TVs and go outside to spend time with bees or grow a garden – or both.”

And the tangible reward? “That amazing, golden honey,” he says. “Fresh raw honey is so different and superior to what sits on most supermarket shelves that there is really no comparison. If you have ever eaten a true Arkansas homegrown tomato in the middle of the summer, you understand how different it is from those tough pink things labeled as a tomato in the supermarket in the winter. The difference in honey is like that.”

For those who want to contribute to the environment and promote honey bees but cannot keep them, Zawislak recommends planting flowers. “This increases the natural beauty of the world around us, but it also supports honey bees and the numerous other pollinators and beneficial insects,” he says. “Plants and insects maintain the base for the whole food chain, supporting birds and other animals, all adding to a healthier environment, and a higher quality of life for all of us.” 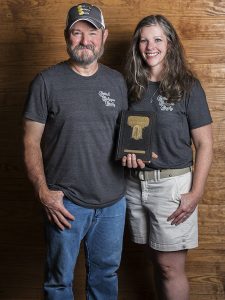 Smith sees a number of prospective beekeepers come through his store each day. And he’s more than willing to give them some advice.

“First, you have to get educated before you get your bees,” he says. “Do your homework. There are DVDs, books, YouTube… There’s a host of great information out there.”

Second, he says, join a club. “Get to know the beekeepers in the area,” says Smith. “Get some guidance information. Maybe along the way, you’ll meet a mentor, someone who’s willing to give you advice. That’s a great asset.”

These clubs connect novice hobbyists with a wealth of knowledge from veteran beekeepers. Each year, Smith and fellow members of the River Valley Beekeepers Association host a two-night beginners course – free of charge. Beginners can also utilize the resources available from their local cooperative extension service, like introductory courses in beekeeping.

The third thing a prospective beekeeper should do, Smith says, is gear up. “Get good equipment. First and foremost, start with your protective gear… Just like raising livestock, they have good days and bad days. There are rules to this, and having proper protective gear is one of them. It’s crucial.” 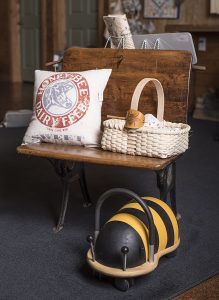 Deciding what to keep your bees in, he says, is also important.

“If you decide you can and want to do this, start in January,” Smith says. “Most every place that supplies bees will start taking orders. You want to get your name on that list and have your bees secured.”

At Central Beekeepers Supply, Smith and his family sell bees by the box. They also offer queen bees throughout the summer, a hot commodity for would-be beekeepers.

When buying bees or a hive from a third party, Smith urges future beekeepers to have them checked by an Apiary Inspector, a divisional employee of the state Plant Board. “The state of Arkansas requires those bees to be inspected before you purchase them and before they’re moved to a new location,” he says.

While not everyone can or will start their own hive, they can support bees and those who tend them.

“Support your local beekeeper by buying locally-produced honey,” says Zawislak. “Beekeepers work hard to keep their hives healthy. By supporting them, you support a good population of pollinators in your own neighborhood, which helps to pollinate all the gardens and fruit trees and wildflowers around you.

“Supporting local bees is good for everyone.”