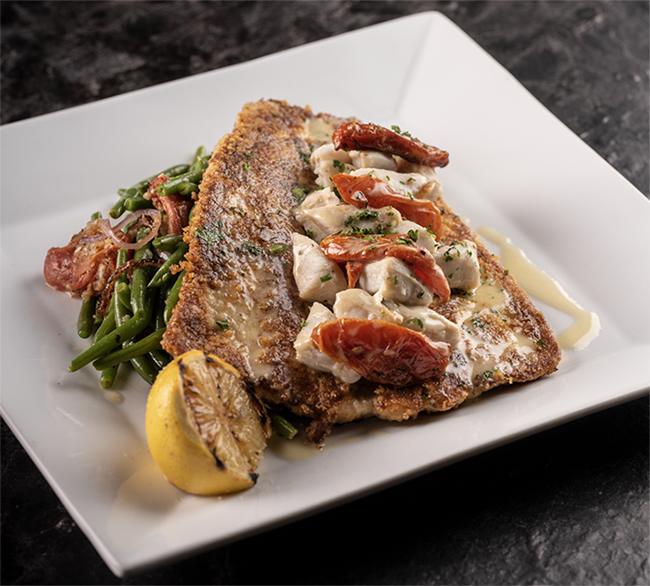 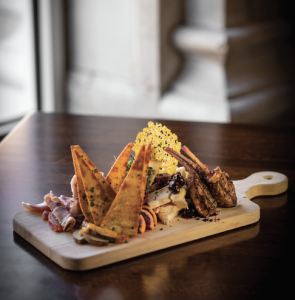 Amid the hustle and bustle of downtown Little Rock, there’s one restaurant that is taking a page from the history of Main Street and putting its own modern twist to it.
Allsopp & Chapple Restaurant and Bar, one of Little Rock’s hottest new restaurants, is making a name for itself with its mouth-watering lunch and dinner offerings, impressive cocktail menu, and an impeccable eye for historical detail.
Located in the historic Rose Building, built in the early 20th century, Allsopp & Chapple takes its name from the Allsopp & Chapple Bookstore, which was the leading bookstore in Little Rock for six decades. And the restaurant is spotlighting the legacy of the Rose Building and the bookstore.

Stepping inside the restaurant, you see a cohesive mix of historical and modern. Slick furnishings make the restaurant look hip while well-chosen details bring the building’s history to life. Black and white photographs hang on the walls showcasing downtown Little Rock as it looked in the early 20th century through the 1950s.
“We want to harken back to downtown Little Rock when it was really happening. There was a lot of stuff going on here in downtown. If you look at our pictures, it was a thriving downtown. In the last few years, we’ve seen it grow quite a bit. So, it speaks to both of those – the history of downtown and the history of Little Rock, as well as where we are now,” says Jeff Williams, Allsopp & Chapple assistant manager. 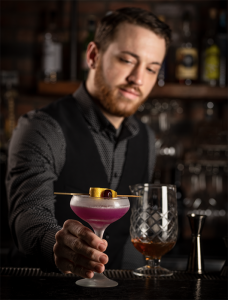 You can see the bookstore’s influence in the hanging wooden bookshelves, featuring classic hardbound volumes. Even the cocktail menu has a literary bent. You can’t go wrong with a cocktail named after Catcher in the Rye. “When you’re talking about cocktail menus, a lot of bars around the country are really creative with their approach to how to make a cocktail menu. You just take an idea and build a drink around it. That’s what we decided to do, to go along with the history of the bookstore,” Williams says.
Allsopp & Chapple offers a wide variety of food specialties from Executive Chef Bonner Cameron, ranging from Chilean sea bass to ribeyes to shrimp and grits. That’s not to say that Chef Cameron doesn’t have his favorites. “My favorite thing on the menu? The trout. I’ve got a pecorino Romano-encrusted rainbow trout. It’s got colossal crabmeat on top, oven-dried tomatoes. I like seafood,” he says.
But for those coming to the restaurant for the first time, he suggests giving the steaks a shot. Using a dry-aging process with a coffee cure, Cameron prepares a tender, juicy steak with a taste that approximates that of grass-fed beef.

“Allsopp and Chapple specializes in fresh modern cuisine and prepares cool cocktails with a literary bent.”

“I dry age our steaks here, and I have a nice coffee cure I put on them. It gives them an earthy taste. It helps tenderize our meats, and we get a lot of compliments,” Cameron says.
Trained at the Art Institute of Houston, Cameron has experience at some of the finest restaurant in Houston, and he’s bringing all he’s learned to create a one-of-a-kind experience here in Little Rock.
“The biggest lessons I’ve learned are to always source fresh and locally. Always try to buy impeccable ingredients,” he says. “Have fun. It’s all about having fun and getting to know your guests and building relationships.” 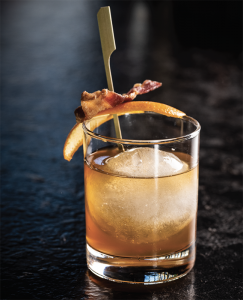 One of the ways the restaurant is creating a unique experience is through the small details that other restaurants might neglect. Allsopp & Chapple offers valet parking Wednesday through Saturday as a service for its guests. Cameron emphasizes that the service is designed to be professional to the highest degree but still friendly. All these small touches add up to a big impact.
“We’re trying to get people to have an experience,” Cameron says.