Taking the Classic and Making It Modern: Allsopp & Chapple Restaurant 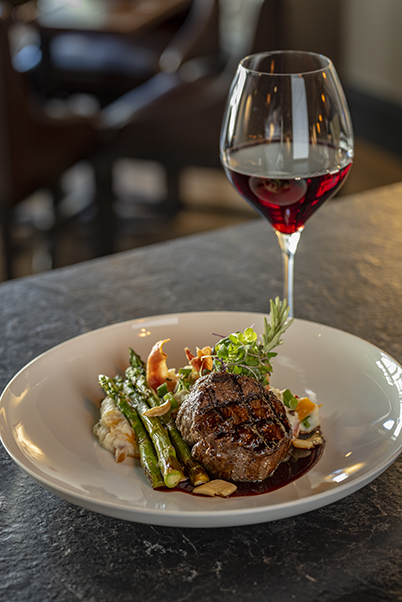 Nestled in the hustle-and-bustle of downtown Little Rock, a new restaurant with a historic background is waiting for you to step into its elegant interior for a delicious meal. This restaurant, Allsopp & Chapple, is looking to honor the legacy of a famous building while leaving its own impact on the city’s food scene.
Located in the Rose Building, Allsopp & Chapple is paying tribute to the history of the building, which was built in 1900 and housed a bookstore for over six decades.  The restaurant pays homage to downtown Little Rock’s history with a collection of photographs on the walls from the early 20thcentury. Most of the photographs hanging throughout the restaurant depict downtown just as it was modernizing, a throng of people and automobiles.
Allsopp & Chapple originally was the name of Little Rock’s premier bookstore, and it was located in the Rose Building. The restaurant is taking the bookstore’s name to honor the building’s history and build a unique bookish atmosphere. To honor the building’s literary legacy, the restaurant is building its cocktail menu around a bookish theme. According to assistant manager Jeff Williams, many cocktails and drinks will be inspired by literary works, especially “books that everyone read in high school” and famous authors. One of the drinks will be inspired by Catcher in the Rye, but there are plenty more in the works.
“Really you take an idea, and you build a drink around it. There’s some many things you can do with it, so that’s what we decided to do, to go along with the history of the bookstore,” Williams says.
Expect great drinks from the Allsopp & Chapple bar when you go in. “We take the classics and turn them modern,” Williams says. 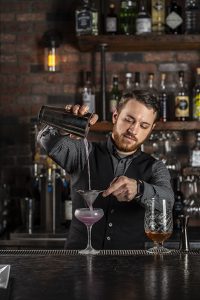 The food is what truly sets this restaurant apart from the crowd. Offering “eclectic New American cuisine,” Allsopp & Chapple has a wide range of culinary offerings from Executive Chef Bonner Cameron, who emphasizes fresh ingredients and locally sourced produce.  Cameron points to the restaurants steaks and seafood as particular strong points that should be tried.
In the coming months, Allsopp & Chapple will be playing host to a number of events that should have everyone clamoring to get in its doors.
Every month, Allsopp & Chapple plans to host multiple special events centered around holidays and other notable dates. During February, the restaurant will be hosting two events – one a multi-course dinner and the other, a decadent happy hour.
On February 14, Allsopp and Chapple is offering a special “Be My Valentine” menu, which is a sumptuous 4-course culinary extravaganza. Patrons will choose one of several options for each course, and it should prove to be a difficult choice each time to decide between multiple mouth-watering options.
To start this romantic meal, guests can choose between a delicious baby watercress salad with fresh strawberries, candied pecans, pickled red onion with a citrus herb vinaigrette or a crab-and-corn chowder with zesty grilled garlic bread.  The choices don’t get easier with the second course: choose between diver sea scallops, morel stuffed mushrooms with jumbo lump crab and tarragon French brie and Gruyere cheese, Wagyu beef skewers with Japanese sweet potatoes and a scallion maple soy glaze or shrimp cocktail ceviche with avocado lime mango salsa and a flatbread crisp.
Of course, the heart of any menu is the entrée, and Executive Chef Bonner Cameron has it covered. Choose between pan-seared Alaskan halibut with dill fingerling potatoes and a parsley sauce; pan-seared veal chops with cheesy Gouda grits, baby carrots and a Madeira mushroom pan gravy; Filet Rossini with seared foie gras, creamed spinach and black winter truffle; or wood-grilled ahi-tuna with Asian-style faro rice and an Indonesian soy glaze. To round out the meal, have a decadent dessert for two, choosing between Bananas Fosters on a Raft, strawberry shortcake or triple chocolate lava cake. 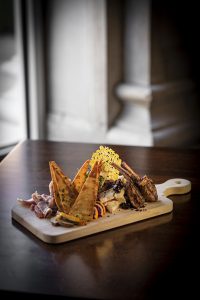 “Of course, it has to be romantic because it’s Valentine’s. We’re going to have a jazz band, as well. There will also be complimentary roses for the ladies in house,” Cameron says.
The “Be My Valentine” menu will $75 per person, along with special wine pairings for $35. However, the restaurant will be offering a special discount for those who prefer an earlier dinner.
We’re going do an early-bird special for people who want to come in 4 to 5:30 p.m. It’s at 15 percent off discount per person,” says Crystal Dear, Allsopp & Chapple’s marketing director.
One week later, on February 21, Allsopp & Chapple will hold a happy hour spotlighting Rocktown bourbon.  “In February, we have a Rocktown bourbon tasting that we’re very excited about,” Dear says.
From 4:30 to 6:30 p.m., patrons can enjoy a smoky Rocktown bourbon cocktail prepared by the expert A&C staff while snacking on bites prepared by Chef Cameron.
“Chef is going to do some bourbon pairings with food. Dark chocolate, nuts and fruit,” Dear says.
While these two events will be immaculately prepared experiences, you can always expect a fine dining experience at Allsopp & Chapple any day of the week.
The restaurant is open Monday through Friday, from 11 a.m. to 10 p.m., and on Saturday from 4 to 10 p.m.