America in a Bowl: The Saga of America’s Favorite Comfort Food 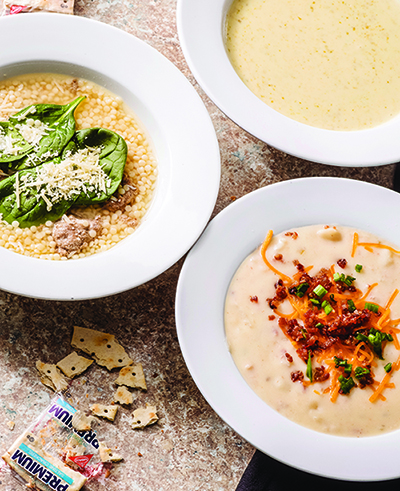 Being a nation of immigrants, there are very few things culinary that America has not borrowed and thrown into the great melting pot that is our culture. This comes with the territory of being a relative whippersnapper among world powers and other countries around the globe. Just about anything we bite into or wash down has its roots somewhere else, traveling here on a scrap of paper in a raggedy, star-crossed immigrant’s pocket, later to become embedded in our edible landscape.

Now, we may have perfected a few of the old-country standards: We didn’t invent the sandwich, but we came up with the Reuben and the hoagie, for instance. And we have been inspired to create Americanized “ethnic” delicacies from time to time. (Don’t believe me? Just try to find a chimichanga in an authentic old-school joint in Juarez sometime; I’ll wait.) All of which is OK as far as that goes; I mean, when you find your favorite food at a party or tailgate, do you really care whose kitchen it came from? Of course you don’t.

But there are those magical morsels — the few, the proud — that were authentically bred, born and birthed in the USA. Key lime pie is one; succotash is another; Cobb salad a third. Not surprisingly, corn dogs are as American as apple pie, assuming apple pie had originated here and not in England. But I digress.

And crowing that star-spangled, native-dish list: chili. A magic elixir of heart-warming mixture, chili comes into a starring role in the frostier months of the year. It’s a common guest at tables from Kennebunkport to Camden and Malvern to Maui, with or without a sidecar of saltines. And it’s ours, baby, all ours.

“It’s just comfort food,” says Heather Isbell, co-owner of Izzy’s in Little Rock, a longtime restaurant that has been singled out nationally for its chili recipe. “When it gets cold and chilly, no pun intended, we kind of just lean towards wanting that comfort. You know, flavor, something hearty. We get tired of soup. Chili is kind of that nice middle ground.”

Izzy’s recipe goes back to the 1980s and was developed by Bob Isbell, Heather’s father-in-law. When she and her husband, Robert, bought the restaurant back in 1996, she tweaked the recipe slightly to make it healthier without destroying its soul. They’ve been pouring out gallons of the stuff ever since.

“I think one of the main things that sets our chili apart from some other chilis is, we don’t try and make it something other than chili. You know what I mean?” she says. “It’s really good, old-fashioned, traditional chili. It’s not really spicy. It’s not really sweet. It’s appealing to the majority of the masses.

“We do have beans in it, and we use certified Angus ground beef. The beef that goes in it is really good. It’s really lean and really flavorful. I think that’s a big plus for our chili, using really good quality ingredients.”

If it surprises you that chili was born in the States and not south of the border as many people assume, well, you just shoulda known better. Forget for a moment that in 1959, Diccionario de Mejicanismos, defined the stew as “detestable food, passing itself off as Mexican, sold in the U.S. from Texas to New York,” showing they want nothing of the credit for inventing it. Besides that, chili carries all the markings of a classic American dish: simple ingredients, many of them cheap and within reach of the common folk, spiced and cooked slowly to loosen everything up. What you get is the hearty, substantial stuff cowboys, lumberjacks, longshoremen and Rosie the Riveter relied on to get the job done. Nothing is more American than that.

Now, I hear you Googlers out there: “What about Sister Mary of Agreda in Spain who went into trances, and when she woke up, the legend goes, she wrote down the recipe for chili con carne?” “What about the Canary Islanders who settled in San Antonio where they made a soup of local peppers, meat and wild onions?”

Well, what about the Loch Ness Monster and the Chupacabra and Bigfoot? They can’t all be real either, just Bigfoot who, last time I checked, is American and probably a chili lover from the looks of it. 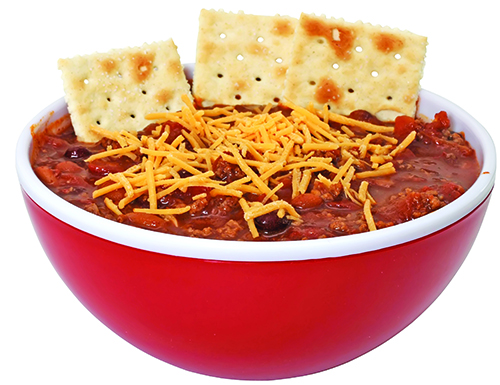 I will give the chili birthers this much — the stew’s taproot appears to originate in Texas, which, we can all agree, acts like its own country sometimes. But that’s about as far as any logical person can go. Well, that and the whole bean/no-bean debate that rages among chili purists.

“I hate to offend the bean lovers, but we don’t put it in the original mix,” says Mark Baber, president and CEO of Oklahoma-based Ron’s Hamburgers and Chili, which has operated a Bentonville location for more than 15 years. “We don’t put beans in it because real chili’s not supposed to have beans in it.”

When Baber talks chili, people listen. You don’t last two generations over 45 years in the restaurant business and grow to 20 locations in three states without doing something right. And when “chili” is in the name of the company, it’s a good bet that’s probably it.

“Each location makes its own batch and, in the wintertime, we’re cooking it every day,” he says. “We’ll use a big ‘ol pot and use, like, 60 pounds of it. It takes about three hours to cook, so it’s not a fast process. You’ve got to brown the meat, and we throw onions in there and cook the onions in it. And then, we add our spices to it.’

Baber’s operation is old-school enough to cook brick chili– a concoction that got its start on cattle drives when chuckwagon cooks would pound dehydrated ingredients into “bricks” that in its original form, kept and traveled well and could be reconstituted on the trail by adding water. Baber’s version cooks so thick they cut it with water and American cheese to the appropriate consistency before serving.

From there, patrons can top their bowl with any number of things to taste — chopped onions, more cheese, jalapenos. Baber will even relent with beans on request, but there are some lines that no self-respecting chili house should cross, he says, so don’t look for a veggie or turkey version anytime this side of Hell freezing over.

There are literally a hundred reasons to love this dish. You don’t eat chili daintily — can’t even sip it, to be honest — so chock-full are the best versions of meat and vegetables and heritage. Just grab a spoon, a sturdy cracker or at expert level, tortilla chips, and dig in. Chili is your winter wingman; it keeps a cheeseburger warm, rides shotgun with great tamales, snuggles a hot dog, dribbles over nachos, fries or Fritos. It is, dear friends, the proud, loyal mutt of the soup world.

The defense rests, Arkansas. Chili can only have come from America; red as Georgia clay, thick as Cleveland snow, fine as the Fourth of July. May it forever find home in the land of the free. 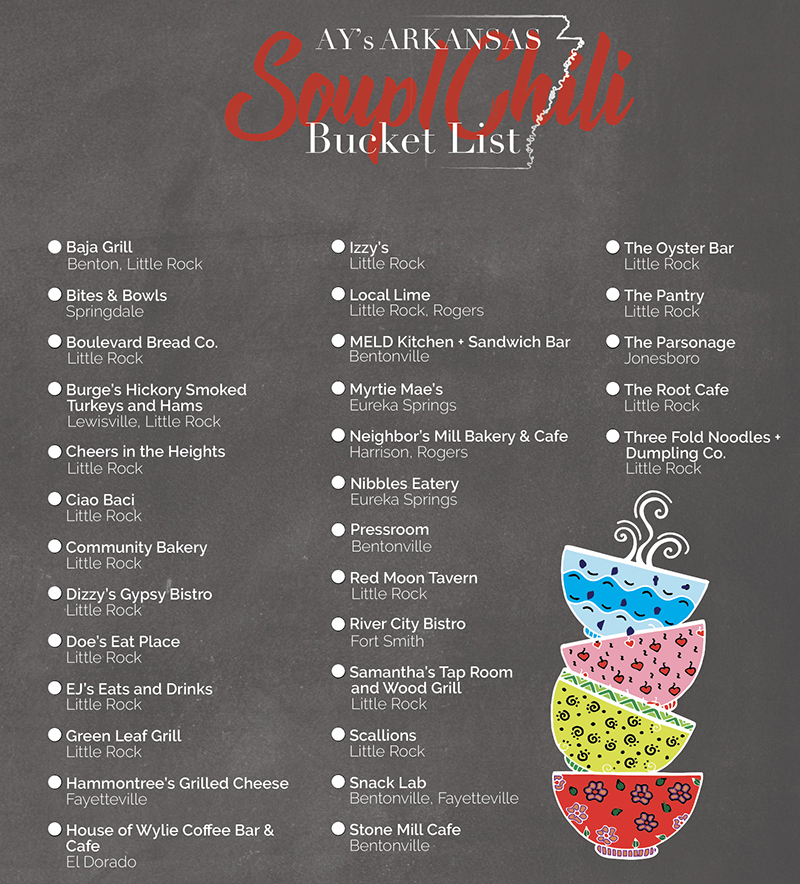