American Woodie: Turning a Diamond Mine into a Humanitarian Gem 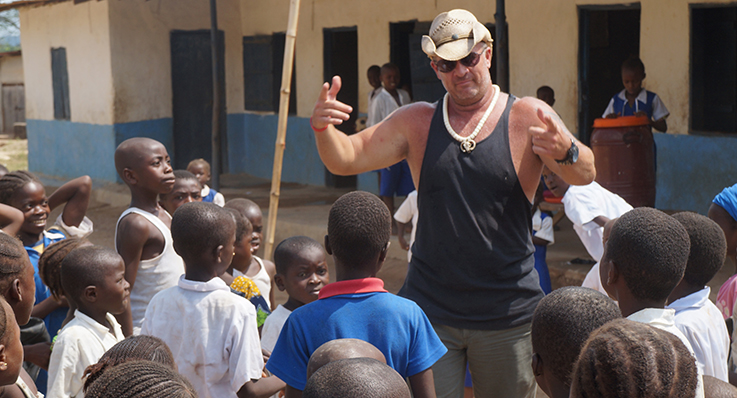 For a man who has spent the last six years running a diamond mine in Sierra Leone, Woodie Butler wears surprisingly few diamonds. Zero, to be exact. The only diamond of value to this Arkansas native is his daughter, three-year-old Diamond Butler, named not only after his profession, but after the symbolic way she brought a sparkling light into his world after he uprooted his life in Central Arkansas to live among the natives in a remote chiefdom in West Africa.
In fact, the only accessory this six-foot-one, 265-pound, muscular entrepreneur wears is a Peter Grimm cowboy hat and an occasional necklace made with an American flag charm hung form a simple chain. Butler is the only American for more than 100 miles of his home in Sierra Leone – and likely the only American in the entire country that can properly “Call the Hogs” for that matter – and it’s that distinction that has earned him the nickname “American Woodie” to those that know him best. 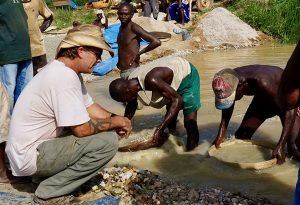 He now runs and operates American Woodie Diamond Co., the world’s first and only e-commerce and jewelry store that provides customers with video, pictures and GPS locations for each diamond his company mines or buys in the bush of Sierra Leone to ensure the diamond has been ethically sourced. Aside from being one of the few direct source diamond miners in the industry, Butler’s humanitarian missions set him apart from the rest, where a percentage of each diamond bought from his company goes back into the community from where the diamond came.
RELATED: Vault: Banking on a Great Experience
Community isn’t a word Butler tosses around lightly, and it’s one word that plays itself out on a daily basis from his home in Sierra Leone. Although it’s only been six years since he first cancelled his return ticket to America and decided to stay in Africa, many of the local villagers can only vaguely remember a time when they didn’t wake up to the sound of “Sweet Home Alabama” playing from the Butler home. And most of the local kids can’t even recall what it was like to walk to school without saying good morning to the camo-clad American in hopes of getting a warm smile or a hat tip out of him while he lifts his Yeti rambler in response to every “Mr. Woodie! Mr. Woodie!” that comes his way. 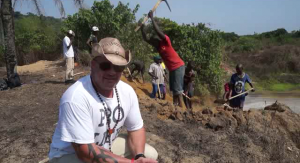 In less than a decade, Butler has been adopted by three Paramount Chiefs, funded the education of more than 200 local children, and has become an integral player in his home village of Sulima where he has brought in generators for local mosques and provided food and medical care for his workers and neighbors when there was none.
“It’s just my way of thanking them for accepting me,” he explains, adding that he has felt welcomed since day one of his arrival in the country. “I’m this big country guy from Arkansas, and they had never met a guy in a cowboy hat before. They invited me to go see their village, and the people just embraced me like you wouldn’t believe. My first trip to the village took us six hours to get there on a goat path. We had to cross a river on a pull-across ferry, and when we came to the top of the hill and I saw the village sitting on the Sewa River below, I said to myself, ‘I’m going to end up spending the rest of my life here.’ No one has ever lasted out there longer than a month or two in the bush, but I moved out there to that first house without a toilet, electricity, or running water. That was over six years ago, and I haven’t wanted to come back since.”
From day one, Butler knew he had come across something precious, and the gemstones were just the icing on the cake. Although his diamonds come from the same countries as many of the big names in the industry, American Woodie is not the average diamond dealer. Where most of the other dealers rarely step foot outside of their Range Rovers while in the country, Butler is regularly down in the ditches with his men hunting for diamonds and filming each finding for his customers.
RELATED: ROXing the State of Arkansas
“The goal is to give every diamond a proprietary ‘birth certificate’ with pictures and videos of those diamond coming out of the ground,” he says. “No other company is able to document the exact sourcing of their diamonds to this degree. In fact, I was on the phone with a diamond company one time and after a while of me trying to find out where they sourced their diamonds, they finally said, ‘Sir, if you’re so worried about where your diamonds are coming from, the best thing is to get on a plane, go to Africa, and mine them yourself. But you don’t want to do that sir, because, trust us, it’s very hard.” 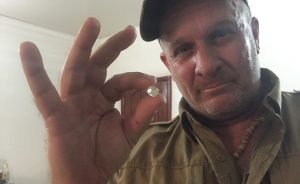 Woodie with one of his diamonds

A little hard work never scared him off before, and it doesn’t seem to be scaring him off anytime soon. His business is growing by the day, where his ultimate plan is to use the profits from the sales of his diamonds to fund diamond tourism development (imagine picking out your own diamond!), build schools and clinics, provide fresh water, eradicate malaria, and send every girl in his chiefdom to university … for free.

“I’m trying the best one man can to make a difference in this world,” Butler explains. “Obviously, I believe that the main reason for the existence of any business is to make a profit. Nevertheless, there is no reason why making a profit should interfere with radical transparency. I also believe that transparency equals trust, repeat customers, and the opportunity to generate more profits for giving back to the indigenous peoples.”
For more information, or to purchase an authentic American Woodie diamond, visit www.americanwoodie.com.
RELATED: Crater of Diamonds State Park Has Record Year