At the distal end of Little Rock’s Rivermarket — two doors down from the highway bridge where the neighborhood yawns into green space surrounding the Clinton Presidential Library — a warm breeze plays about the star-studded night. 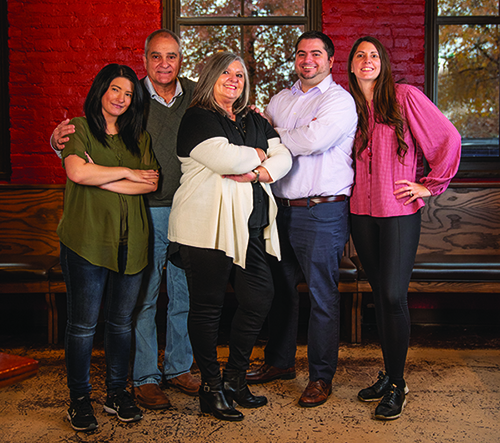 A mere half-block east from the enveloping neon and noise of the tourist district, the ambiance is different here, softer, awash in ambient streetlight, cooled by deep shadow. It’s quieter, darker, an intimate pocket of the city’s most popular neighborhood.

“Hello, how are you?” cuts through the night air. Guillermo Bruzatori’s lilting tenor appears out of nowhere, like an unexpected cloudburst. “Good evening.”

As a barker, Bruzatori is tailor-made with a magnetism of voice that stops you in your tracks long enough for the aromas of his family’s garden-level restaurant, Buenos Aires Grill & Café, to reach you. Grilled meats and their savory seasonings overtake your senses, borne on the back of music and laughter from below.

He is but one family member working tonight; daughter, Florencia “Flo” Bruzatori-Mullins, is creating magic behind the bar while youngest child, Camilla, manages diner traffic. Flo’s twin brother, Willy, has the night off and Guillermo’s wife, Graciela, is limiting her time here as a safeguard against the novel coronavirus. Accordingly, Guillermo doesn’t hug patrons at present, as is his trademark, but the warmth of his tone comes close.

“Please join us for dinner,” he says in his lyrical Spanish accent. “This way!” 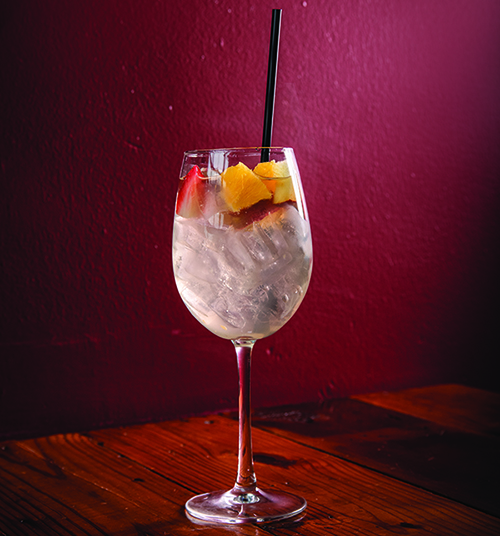 Stories like that of the Bruzatori family feel like something from another age. The college-educated professionals immigrated to the United States fleeing deteriorating social and economic conditions in Argentina. For nearly 20 years, they have lived the American Dream in ways many believe are a thing of the past, bolstered by hard work, family and unyielding faith.

“We had an economic crackdown [in Argentina] in 2001,” Guillermo says. “The American owner of my company was watching the television one night and saw we had a big problem in the streets. He called me and said, ‘Hey, you cannot live over there, they are killing each other. Why don’t you come [to America] and try to see if you can do something from here.’”

“To be honest, I thought that was a crazy thing,” says Graciela. “So, I talked to [Guillermo] and said, you go and try and then I will follow you. So, I stayed over there for like five months. Then what happened was that someone was trying to attack me one night. I told Guillermo, ‘Hurry up, I want to leave this country. Do what you need to do to get things done.’”

Graciela and Guillermo met when both were working in a factory in their native Argentina. She was brash and outspoken and he was immediately intrigued.

“The first time I know her, we were at the beach,” Guillermo says. “I used to go with a lot of women to the beach for drinking that white wine sangria, that is a thing from Argentina that has a lot of fruit. 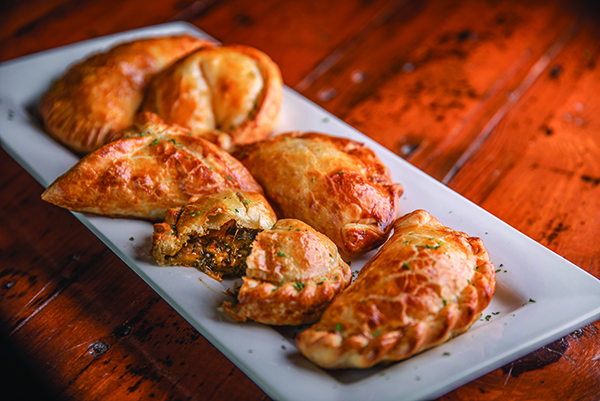 The empanadas, like all of the Bruzatori fare, are homemade.

“Give me the wine!” Graciela laughs.

“She was different,” Guillermo adds.

They married in 1980, melding two strong, passionate personalities and furthering a family line of equally strong, remarkable individuals. Take Guillermo’s mother, Beatrice, who in the 1940s defied cultural norms to earn advanced college degrees in social work en route to working at an institute for the blind. One day the organization had an important visitor, Evita Perón, wife of Argentine president Juan Perón.

“When she was working in the blind institute, Evita came in one day, and she fell in love with [Beatrice],” Graciela says. “She was talking to my mother-in-law, and she said, ‘You know what? Starting tomorrow, you will be my right hand. I want you to work with me all the time.’”

Beatrice was such a close confidante to Perón, the First Lady gifted her a gold coin bearing her image, a trinket held only by select members of her inner circle. The coin is now in Little Rock where it is a cherished family heirloom. 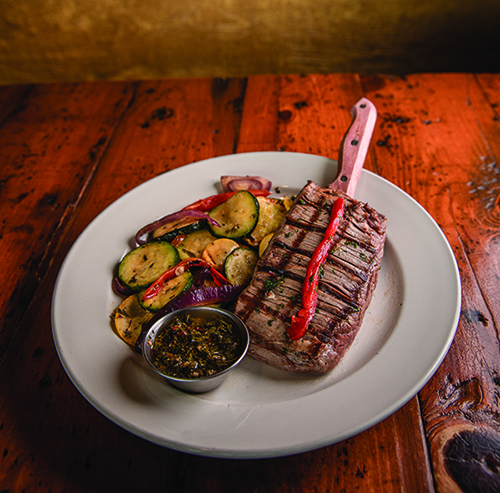 “My mother loved Evita because she was working all day with her. She saw that, although she was seven years younger, she never stopped work,” Guillermo says. “My mom told me that there were days that they were working with poor people all the time for 12-14 hours.

“[Evita] came from the country. She was, more or less, a poor lady. As First Lady, she was working all the time with the poor. She was not that person that was all the time in shows and meetings, you know? She was trying to liberate the poor people.”

Guillermo had his own brushes with political power growing up; in school and in college, he was four years ahead of fellow engineer Mauricio Macri, who would serve as president of Argentina from 2015 to 2019. But unlike Macri, who came from society’s elite, Guillermo and his brother, Carlos, were solidly middle class, and at times growing up, felt inferior because of it.

“This is the effect on me,” he says. “In 12 years of school, I had the same peers for 12 years, and I never, never invite any of my peers to my house. Not because my house was ugly. It was a normal house of medium class. The thing is, when I went to their houses, they were mansions and I was like, ‘Oh, God. I cannot invite this to my house.’ It was incredible, those big places. You couldn’t believe it. In the end, I did not love my school because it was not for me. It was for the high class, not for me.” 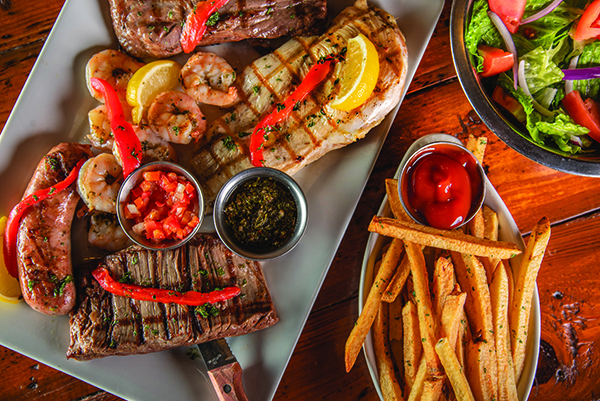 By far, the most famous figure in the family lore was an Argentinean priest who headed Colegio del Salvador in Buenos Aires where Beatrice served as one of the deans. She saw something in the clergyman and kept telling Guillermo he was destined for great things. A jokester, Guillermo took a less pious approach to the man, Jorge Bergoglio, better known today as Pope Francis.

“She was working closely with him, and there were times that I went to visit her. They were working together and it was, ‘Hola, Jorge!’ She was killing me with the look,” Guillermo says, the memory still making him laugh. “She was always at home telling me, ‘You are crazy. You have to stop. This is a very important man.’

As pastor of a local parish, and because of the connection through Beatrice, Bergoglio would interact with the Bruzatoris regularly, baptizing their children and celebrating Sunday Mass. As devout Catholics, the family held the unfailingly humble priest in high esteem, but Guillermo didn’t share his mother’s lofty predictions for him.

“She said, ‘Watch out for this guy. This guy is skyrocketing,’” Guillermo says. “She said to me, ‘He’s going to become the archbishop of the city of Buenos Aires and become number one in Argentina.’ Buenos Aires is like New York. I said, ‘No, mom.’ And he was. She said, ‘I told you.’ 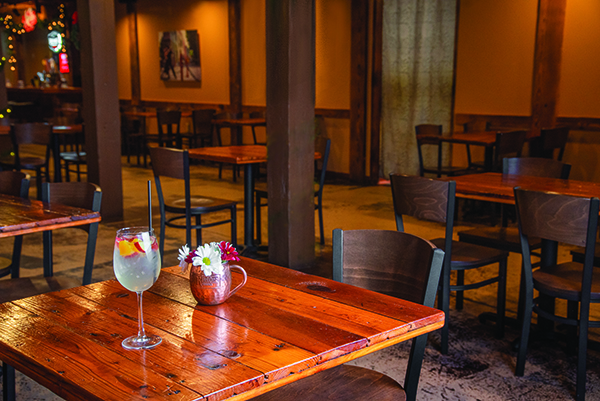 “I said, ‘Mom, that’s it. The joke is very nice.’ She told me, ‘No, no. Wait a moment. Perhaps he could become pope.’ This is too much. In 2013, we were not expecting anyone to elect him because there were other names on the polls, younger people.”

During that conclave, the Bruzatoris joined Catholics worldwide in watching for the white smoke from the Vatican chimney, the traditional sign that a new pontiff had been chosen. When Pope Francis walked out on the balcony that night, the first Bishop of Rome in history from Latin or South America, the shocked family broke down in tears of joy around the television. Then Guillermo reached for his phone.

By that time, Guillermo and Graciela were already a decade into their life in America. They’d immigrated to the United States with their children in 2002, beginning a slow, sometimes painful process of assimilation.

“For Flo and I, it was tough,” her brother, Willy, says. “We were in the middle of high school [at the time], and we had left our group of friends behind. We learned English in Argentina, but it was all British English. It’s one thing when you have to learn it, and it’s another thing when you have to come out here and talk and listen to the slang and different accents. It’s a whole different ballgame.”

Still, the family persevered. In 2016, they all took the Oath of Allegiance together, mere months before they opened their restaurant, Buenos Aires Grill & Café, in 2017. The day of the citizenship ceremony was the Feast of St. Anne, coincidentally the patron saint of their North Little Rock parish. Looking back on their remarkable journey, and upon a family that now includes grandchildren, Graciela smiles.

“From now on, the Feast of St. Anne is a day for real celebration in our family,” she says. “I’m so happy. I feel really blessed to be in this country and be an American.”