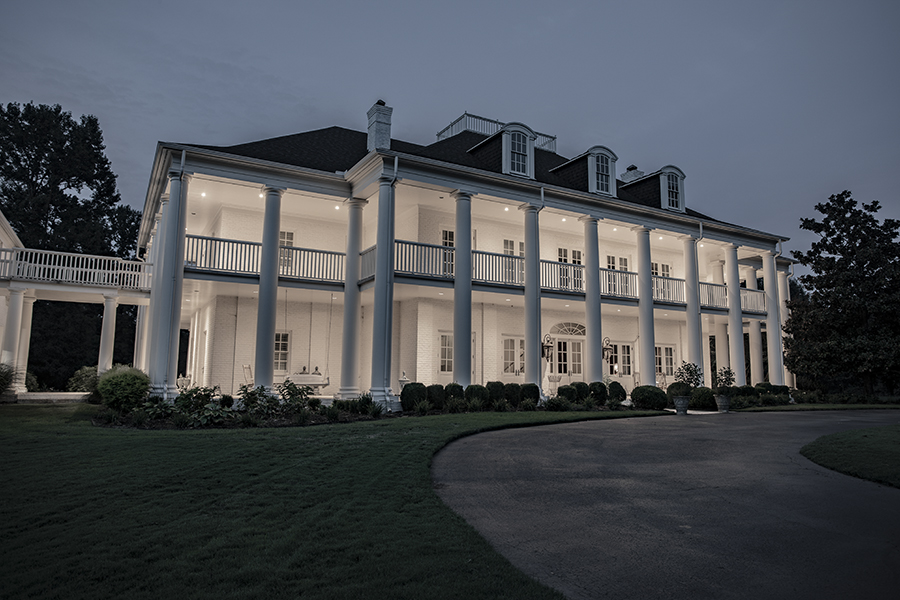 By Kim Dishongh | Photography by David Yerby
Charlotte and Scotty Caroom’s west Little Rock home is a regal plantation-style structure on a sweeping lawn.
“It’s a very formal house outside, but it’s casual inside because of the dogs and kids,” says Charlotte Caroom.
The Carooms’ three children – Sydney, Alex and Ely – have grown and mostly gone, but in the 15 years since the house was built, they and their friends roamed the halls and grounds of the house around the clock.
“All the kids wanted to come here, they wanted to come swim and hang out and there’s plenty of room for them. That was always good,” she says. 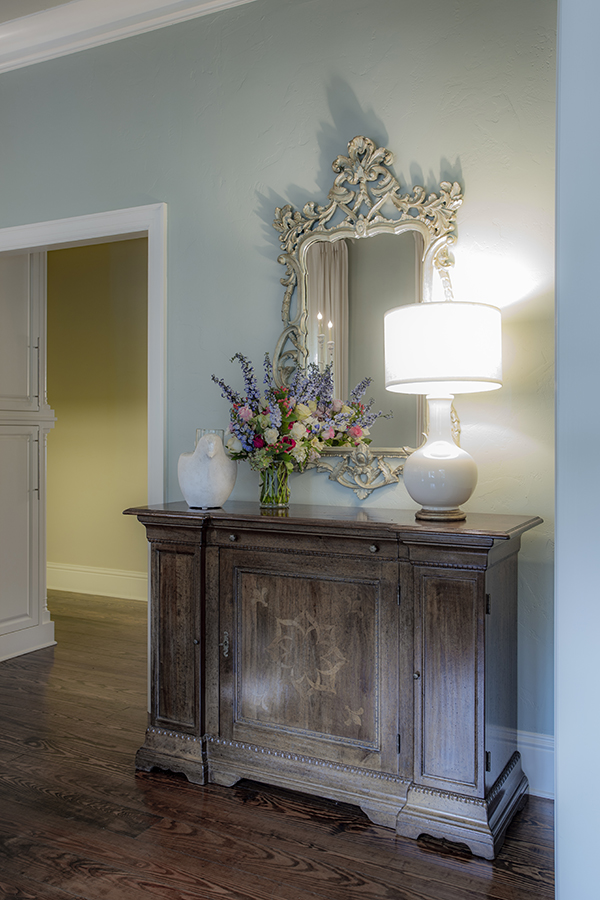 This west Little Rock home was designed by Jack Hartsell.

The home has been a retreat for many foster dogs, too, as Charlotte has worked with various rescue programs in the area.
The Carooms’ three dogs have the run of the house and even enjoy taking drinks and dips in the pool out back.
The house is a 5 to 10-minute drive from the nearest Kroger, but it feels far more secluded on its 10-acre plot.
“I love that I’m a mile from Chenal Parkway, but it still feels like I’m in the middle of nowhere,” she says.
The house was built by Jack Hartsell Construction.
“We just loved the influence of Louisiana’s plantation-style homes, so we started working with Jack. There’s a home in Louisiana that kind of looks like this one, but doesn’t have the porches all around,” she says, looking toward the porches that wrap around both the upper and lower level of the house.
She was present every day during the two years of construction, working in collaboration with Hartsell.
“He says this is one of his favorite houses he’s ever built,” she says. “Jack was great about coming into the kitchen and drawing on the wall, three-dimensionally and showing you his ideas and his thoughts are and what they would look like.”

Charlotte, an artist, has filled her home with art.

The 8-inch pine plank floors were left slightly rough to give the home an aged, rustic look.
“We wanted an open concept but to still have the house look like it was built 100 years ago. When they were putting all the concrete and the mortar in between it, I didn’t let them cut the mortar clean, I wanted them to leave it a little bit jaggedy, kind of old-looking,” she says.
Caroom, an artist, spends much of her time upstairs in her studio, a spacious room with three sets of French doors that not only allow natural light to pour in but also give her access to the upper porch where she has plenty of room to build frames for her artwork or to just sit and enjoy the view.
There are 26 sets of French doors in the home, Caroom explains, so there are ample opportunities to enjoy the outdoors upstairs and down.
“The porches upstairs are all concrete. There’s 500,000 pounds of concrete on the second story porches,” she says. “There are metal beams that run out from the brick into the columns that they cut into them – you can’t see them but they’re underneath those porches. Each column can support 25,000 pounds and there are 57 of them.”
The lower porches, she says, are suspended on rebar, with three feet of crawl space below. 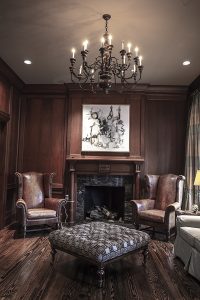 The Caroom’s elegant home is spacious and relaxing.

“He thought the house would breathe better that way,” she says. “Those columns, Jack built this harness that would grab them around the neck and shimmy them up when he was setting all these.”
The columns appear to be continuous from the first floor to the second, through the upper porches.
“He made everything continue and be symmetrical,” she says of Hartsell. “He’s so particular.”
Caroom’s studio is her children’s former playroom; a much smaller room across the hall, now an office, served as her studio when her children were small.
Huge contemporary wall art canvases and canvases filled with images of cows are propped against the walls in the studio, the office and the hallway in between.
“I’ve painted probably 200 cows for people, different sizes and different kinds,” says Caroom.
One painting, a cow and two calves, hangs above the couch in the living room. Caroom’s parents farmed until they sold their operation and moved into a house just behind hers, but Caroom has never owned cows.
“I do love cows, though,” she says. “I just think their eyes and faces are so soulful and sweet… They’re just like big dogs to me.”
A curved hallway gently leads from the living area to the master bedroom, another of Hartsell’s suggestions come to life.
“He didn’t want to square that off, he wanted to curve it, so the woodwork guys had to chip into the back of the wood and get it wet and bend it so that it would come around – and the sheetrock, too,” says Caroom. 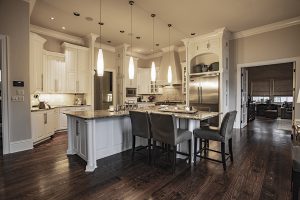 Most of the artwork in the Caroom home was done by Charlotte, usually designed specifically for the space it occupies. A mammoth canvas done by Buddy Whitlock, though, hangs on the wall above the stairs just past the entryway. Its blue and green tones bring to mind the beaches and islands Charlotte loves – she is currently gathering furniture and décor for a beach house being constructed in Florida – but that’s not specifically what she asked Whitlock to do.
“As an artist, I like to just paint without anyone looking over my shoulder. So, I just let him have at it. I told him I might like those color tones,” she says.
The wood-paneled study is a common gathering place in cooler weather.
“I love this room and our friends love this room,” she says. “I think maybe that’s because the bar is right here.”
The bathroom on the other side of the bar was decreased in size during the planning stages so there would be more room for the bar, which has granite countertops and dark wood cabinets that Caroom loves even after 15 years. 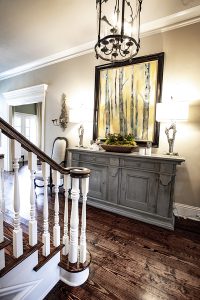 Every corner of the Caroom’s home is a masterpiece.

“Most of what’s in the house is original,” says Caroom, adding that the exterior paint is about the only thing that has changed since it was built. It was light yellow, and now it’s light gray. “It won’t go out of style, this house.”
Hartsell suggested creating slide-out sections in the doorway of the bar that come together to create a workspace for bartenders who are serving people during parties and fundraisers.
“He trimmed out every little square in the bar,” says Caroom.
The Carooms have long enjoyed relaxing in the pool house throughout the warmer months. From the sitting area there, beyond the length of the pool, they have an unobstructed view of the back of the house.
“We had a big wedding out here a few years ago and everybody stood on the porches upstairs, watching, and we had a runway down the center of the pool so you could still see the pool and they walked down the runway to the end. It was really pretty,” she says. “And we’re having another rehearsal dinner out here in the fall and we did fundraisers for Mike Huckabee and for Asa, and our kids went to Little Rock Christian and we did fundraisers for them.” 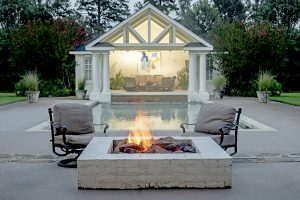 There’s a fire pit out back, as well as a putting green, and toward the main road there is a big open field where the Caroom kids have played soccer and football over the years, and they play now as an annual tradition.
“It’s been going for 12 years now, with these boys who were in fifth grade when it started. The cereal that winners get Cap’n Crunch and the losers get generic corn flakes,” she says. “They come back from college – some of them are married now – and they’ll still come back and play on the Cereal Bowl on New Year’s Day.”