An Undercurrent of Murder 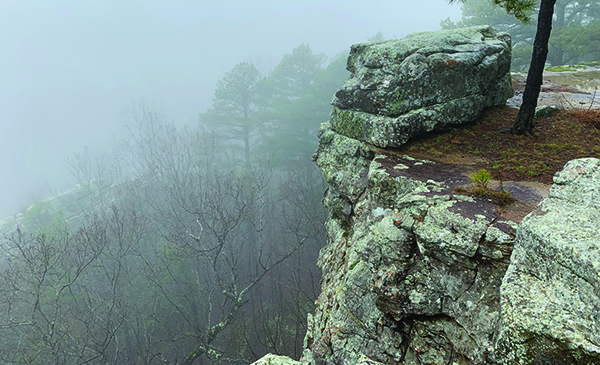 Editor’s note: The following is an excerpt from Joe David Rice’s recently released thriller/mystery novel, An Undercurrent of Murder. The e-book is available for purchase on Amazon, and a paperback version is forthcoming.

Charles Dickens got it half right. It was the worst of times. Period. I was pretty sure about that.

I had tried everything possible — without success as it turned out — to avoid this Ozark Mountain backpacking expedition with Dr. Gib Yarberry. In fact, steering clear of Gib had become one of my regular chores. He and I were not, shall we say, good buddies. Hardly. The one thing we had in common was Ellen, my younger sister and sole sibling. She was also his bride of six months, and that thought still made my skin crawl. 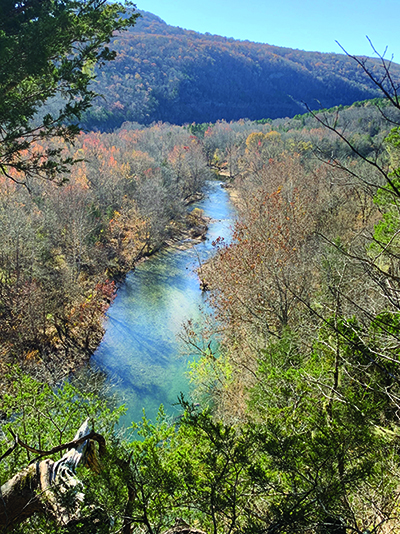 So, I pleaded fatigue rather than accepting invitations to their new place for dinner and told a minor lie or two to avoid other opportunities for get-togethers, including Ellen’s offer of coveted 50-yard-line seats to a crucial sold-out Arkansas Razorbacks game in Little Rock’s War Memorial Stadium. I suspected Gib himself tolerated rather than supported Ellen’s ongoing efforts to kindle a friendship between us.

Once she made it clear that this male bonding experience, as she put it, was non-negotiable, my options — and excuses — disappeared. Gib, I supposed, faced the same ultimatum.

Learning that the camping trip would be my brother-in-law’s initial foray into the wilds didn’t improve my attitude. Nevertheless, at Ellen’s insistence, I spent several long and tedious afternoons helping Gib prepare for our pending adventure. I advised him on purchasing suitable hiking boots, appropriate wool socks, and a first-rate sleeping bag. I gave him a list of other necessities, bought him a backpacking basics handbook, and warned him of hazards we might encounter — things like steep ascents, the occasional tick, and perhaps a tardy and temperamental rattlesnake slithering to its den to hibernate. And, realizing that Gib didn’t get a lot of exercise, I urged him to walk at least two miles every day. During a moment of insanity, I even thought about asking him to join me in the weekly pick-up basketball games at the YMCA. Fortunately, I regained my senses.

The day before we left, I vowed to Ellen that I would make a genuine attempt to reconcile my differences with her husband. Plus, I foolishly guaranteed I’d bring him home in one piece.

Gib and I hit the trail bright and early one fine October day, hopeful our extended trek through the Buffalo National River’s pristine Ponca Wilderness would provide a welcome diversion from a pair of stressful jobs in Little Rock. I needed a temporary escape from the cutthroat world of running an advertising agency, and Gib admitted that a break from hospital administrators and 7:00 a.m. surgeries would do him plenty of good.

We had been hiking a couple of hours, our route more or less paralleling the rocky streambed of the Buffalo River. It was a Monday morning, and I didn’t expect to see many other people in this rugged and remote backcountry of northwestern Arkansas. Outside of a pair of soaring redtail hawks, a chattering family of fox squirrels, and an armadillo oblivious to our presence, we seemed to have the vast woods to ourselves.

Gib skidded to a stop. “Randy! Photo op to the left.” 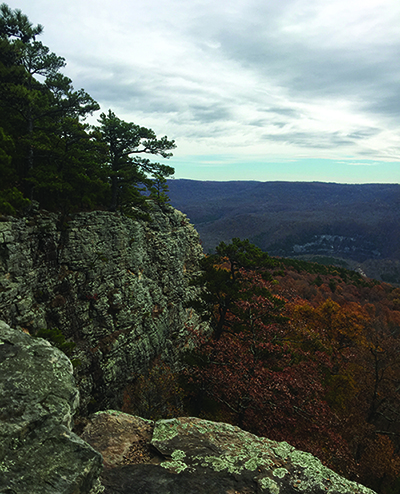 My hiking partner, the consummate shutterbug, bushwhacked through the brush and pointed to a world-class sugar maple across the river’s narrow channel. Draped with crimson foliage from top to bottom, the tree reminded me of a giant torch, its brilliant reflection shimmering in the shoals. With fiery ridges stacked up in the background as if by design, the scene could have been lifted straight from a Sierra Club calendar.

While Gib took his time switching lenses and locations, searching for the ideal composition, I fired off a few frames with my old, though reliable, Nikon. Comparing my gear to his digital, state-of-the-art Canon system was like “placing The Spirit of St. Louis next to the Space Shuttle.” Those had been Gib’s exact words. I ignored him, took another exposure, and stowed my camera.

“Big Bluff is coming up,” I said. “You should be able to get some great shots — provided you brought a wide-angle lens.” When he responded with a confident nod, I figured he had an assortment stashed in his pack.

After Gib completed his photo routine, he stooped at the water’s edge and grabbed a slender stick.

“Could this come in handy?” He tossed it to me.

Five feet long and devoid of bark, it was straight as a pool cue and every bit as solid. Small chiseled marks up and down its length caught my eye.

“You’ve found the perfect walking stick,” I said, handing it back. “And it’s the product of a native craftsman.”

Gib’s brow furrowed as he examined his treasure.

With a dramatic flourish, Gib jabbed one end of the stick into the loose, rocky surface and led us downstream.

The Buffalo in its upper reaches often carries little water during late summer and fall — and this year was no exception. In most places, the crystal-clear stream was seldom more than knee-deep, although deeper pools were not uncommon. Already, we had crossed the river several times, hopping from stone to stone.

When the Buffalo swung back to the left, an enormous stone monolith came into view, dominating our view to the east.

“That has to be Big Bluff,” Gib said as he stared at the towering cliff. “I’ve never seen anything like it.” He craned his neck to take it all in. “I swear it resembles some sort of ancient geologic fortress.”

“It’s hard to imagine a 500-foot wall of sheer rock until you see it. And it’s even more spectacular from the very edge, peering down.”

Gib slid his backpack to the ground, his eyes glued to the sight. After a few moments he turned, fished around in his pack, and removed his camera. “Where’s the infamous Goat Trail?”

“It’s almost two-thirds of the way up.” I pointed at the top of the distant bluff. “If you look closely, you can make it out. Sort of a horizontal break in the face of the rock.”

During our pre-dawn drive from Little Rock, I had told Gib about the stunning panoramic vantage points from the Goat Trail. The narrow ledge had long been a favorite of hikers and photographers, although it was not recommended for the squeamish. Over the years, I’d used up plenty of film from the precarious perch.

After switching lenses, Gib handed me his camera. “Would you mind taking a picture of me with the cliff in the background? This spot is incredible — an Ansel Adams kind of place.”

He explained how to work the digital device and then walked 12 or 15 feet downstream before turning to face me. “It’s the widest lens I have,” he said. “I hope it’ll work.”

The lens was just wide enough — if I held his camera sideways — for a nice vertical shot. I composed the photograph, focused on his smiling but still annoying face, and pressed the shutter.

He trotted back and studied the Canon’s image screen. “Thanks! Ellen will love it.” He took another glance at the picture. “And maybe I’ll order an enlargement for the waiting room, too. You know . . . something to appeal to my outdoorsy patients.”

A crow flew overhead and noisily settled near the top of a tall sycamore tree across the river. Cocking his head at the racket, Gib waggled his eyebrows and said, “Listen! It’s cawing long distance.”

That was one more reason I had hoped to avoid this trip. My hiking companion, the already irritating brother-in-law with whom I was to spend the next five days, was a notorious and unrepentant punster. Maybe he’ll fall into a bottomless sinkhole, I thought, or wander off and get hopelessly lost. Or perhaps encounter a mean and hungry bear or even a rabid skunk. And then I remembered my reckless promise to Ellen.

I shook my head, swung the heavy pack to my shoulders, and resumed hiking, Gib at my heels. Ten minutes later we stood on a gravel bar at the base of Big Bluff. Gazing straight up, I felt rather small and insignificant beneath the endless expanse of rock. High above, six or more turkey vultures circled against the deep blue sky.

“Are you hungry?” I asked. “This looks like a fine place for lunch.”

Gib, who had a reputation for not missing meals, didn’t disappoint me and dropped his pack next to mine. He unzipped a compartment and pulled out a small container. “To celebrate my first camping experience, I brought a special treat.”

“I’ve never had it backpacking,” I said. “People around here generally use fish eggs for bait.”

Gib spread some of the salty delicacy on crackers for both of us. It wasn’t bad, but chasing the tasty morsel with water from a canteen no doubt violated certain basic principles of twenty-first-century etiquette.

“Did you see the news story about one of the former Russian republics opening a caviar export office in Washington?” He shoved another cracker into his mouth.

What could I say?

Once we’d finished with Gib’s unexpected appetizer, I switched to my traditional peanut butter and jelly sandwich. I’d eaten most of it when I noticed a blotch of unexpected color in the bushes half a dozen yards behind Gib.

I pointed over his shoulder. “What’s that dark blue thing in the branches beyond those boulders?”

Gib spun around and stared into the brush. “It seems to be fabric of some sort,” he said with a shrug, clearly not interested.

Curious, I stood and walked toward the spot, thinking I’d discovered an abandoned poncho or something left over from the spring canoe season. Yet whatever it was looked far too vibrant for weathered flotsam. Three feet from the thicket, I stopped. Gib had been right regarding one thing: the mysterious item was indeed a piece of cloth. Staring at what appeared to be a man’s sport coat, I took a tentative step forward for a closer inspection, my eyes moving down a torn sleeve and then past a series of shiny, stylish buttons above the cuff. I gasped as my gaze froze on the back of a pasty white hand.

What remained of the PB&J sandwich slipped from my fingers and tumbled to the ground. 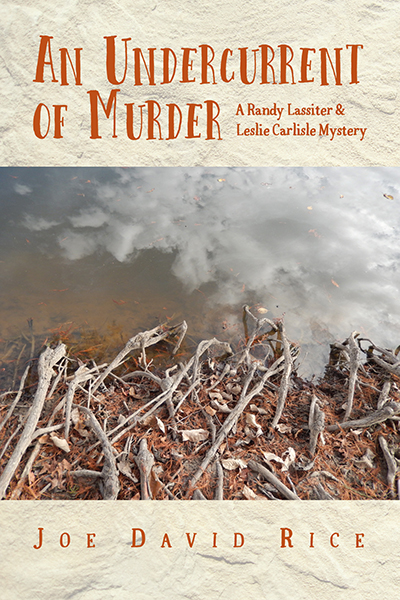