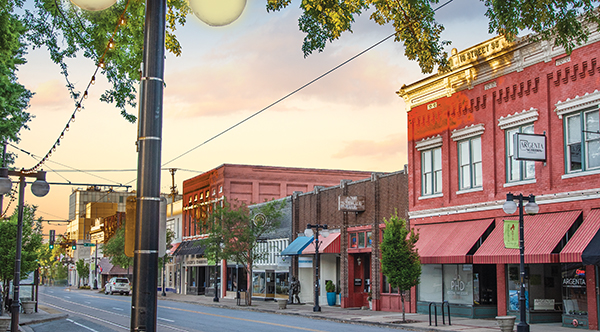 As far as feel-good stories go, it doesn’t get much better than North Little Rock’s Argenta District; ironically, it’s also become one of the most iconic places in the state for “good feels.” Whether it’s the favored pastimes of us Southern folk in music and food or the officially dubbed “favorite pastime” of baseball, Argenta delivers.

“We’re back to full capacity, and things are starting to get back to somewhat normal,” says Stephanie Slagle, the marketing director for the North Little Rock Convention & Visitors Bureau, before apologizing for her seemingly tired tone and thoughts. She’s just had yet another eventful weekend in North Little Rock’s most bustling sector, which is not a bad problem to have considering the events (or lack thereof) of the past year. 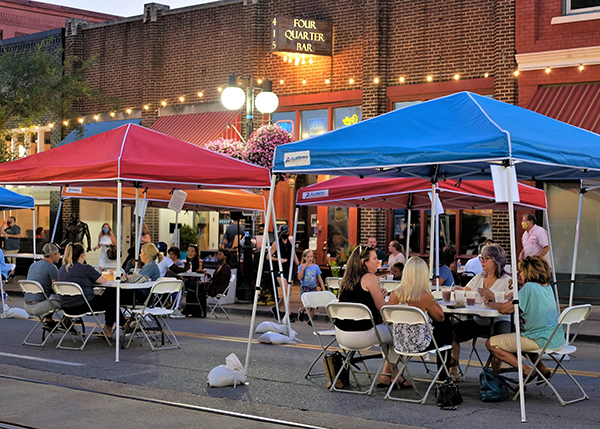 Argenta felt its fair share of the trials of the pandemic, but as a community — meaning the family of businesses that make up its DNA and the patrons who so loyally provide their time and money to the area — it stuck together, adapted and found ways to make lemonade. Like expanding its outdoor dining scene last summer. Swift moves by the city council made it possible, sweat and elbow grease from business owners and people like Slagle brought it to fruition. And, of course, Chris Kent, executive director of the Argenta Downtown Council (ADC). No conversation about Argenta is complete without making note of the lifeblood and energy that he provides.

“What our mission really is, is to promote economic development in the downtown area through the arts,” Kent says. His fingerprints have been behind the mold of Argenta for nearly 20 years, living the mission of the ADC that “a healthy downtown benefits the entire area.” 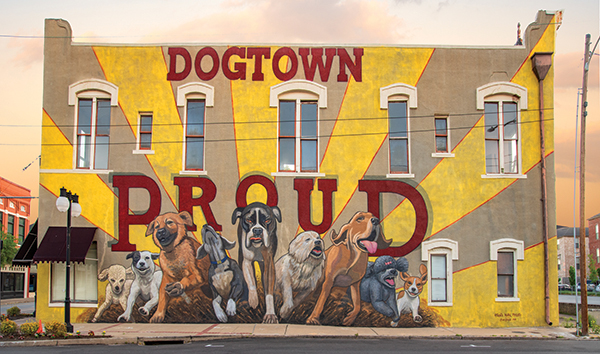 Now, some of those pandemic pivots have become mainstays. Of course, the outdoor dining and drinking were sure to become fan favorites amid the warming weather and overall charm of Argenta; add in the live performances of local musicians and Ballet Arkansas and the litany of public and private artwork, and it’s increasingly clear why it’s one of the hottest spots in all of Arkansas. This is also probably why Slagle reiterates words like “momentum” when talking about the big picture of Argenta.

None of this should come as any surprise to residents of Central Arkansas. The developments in Argenta have been in the works for years, preceding the pandemic, impetus that led to community investments like the $5.36-million-dollar Argenta Plaza. Although it opened last summer and therefore has not yet reached its full potential, there’s still plenty of buzz around the plaza. “The plaza has already been the catalyst for more than $50 million in economic development in downtown North Little Rock,” says the Arkansas Department of Parks, Heritage and Tourism. Argenta Plaza features a stage with a 40-foot projection wall, tent tie-downs, a water wall, a “front porch” with modern swings and a “backyard” area with beautiful foliage. Given its outdoor nature, the plaza has been host to many events over the course of the past year, but, in parallel to the district writ large, the horizon is even brighter for Argenta Plaza as restrictions continue to loosen. 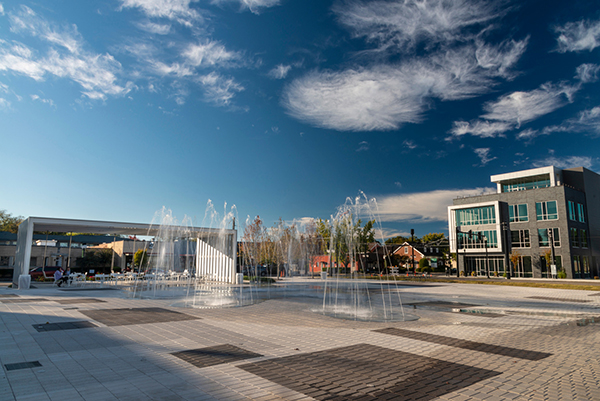 “Everybody has been kind of careful about using the word ‘event’ for like a year now because you don’t want it to draw too many people,” Slagle says. “It’s been a very careful balancing act. You want people to come, but you don’t want too many people to come so you can still social distance and make sure everybody feels safe. But I guess that’s the good thing about Argenta is that it feels so open. Like Argenta Plaza itself, I think max capacity is like 3,000 people. So even when we had several hundred people, you’re all spread out.”

One of the latest developments at Argenta Plaza is the just-announced summer music series that will take place at the location, which kicks off with the band Year And A Day on June 19.

And for such a relatively small area, Argenta has a per-square-inch slate that can compete with any. Our food editor, Kevin Shalin, has laid out the many highlights of the food scene, which alone would be enough to make it a destination worthy of anyone’s agenda. But there’s also just as much to tab on a to-do list beyond dining. One would be remiss to not make note of the sports culture, ingrained by Dickey-Stephens Park and complemented by the Arkansas Sports Hall of Fame Museum. True to its walkable nature, there’s also plenty of shopping enterprises sure to satiate any style. And apropos of the soul of Argenta as an arts district, there’s plenty more for the imaginative tastebuds, like The House of Art, Thea Foundation, Argenta Community Theater and the North Little Rock Heritage Center, which is located in the old fire station. 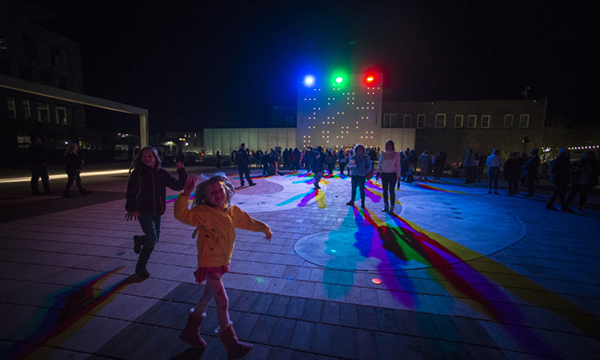 “Since the pandemic started, we’ve doubled down on creating a beautiful downtown for people when they were able to come back out,” Kent says. “So over the last year, we’ve had several murals go up, we finished up the dog dancer statues downtown, we’ve created and expanded the entertainment district, and we have put up more flowers, plantings and hanging baskets than we ever have before. We wanted to make a place for people to come back to when they were able to go out and just be really impressed by and find enjoyment.”

There’s also just as wide an array of room and board, like the subtle and whimsy The Baker, a charming little refined guest house on Main Street; or the sprawling Wyndham Riverfront, which is as exquisite as it is comfortable.

Modern living at apartment complexes like Argenta Flats and Argenta Square are the cherries cementing the area’s rich sense of community.

“Everybody’s out of school and wants to get out,” Slagle concludes. And with the myriad of offerings, entertainment and heart that Argenta has to offer, she’s confident that she’ll see plenty of faces roaming their streets this summer — some familiar, some new, all smiling and soaking up the unique atmosphere of one of North Little Rock’s favorite pockets.

Kent sums it all up succinctly. “You can go into a restaurant, you can grab a drink, you can walk around and look at public art, enjoy all of the plantings, flowers and hanging baskets of downtown, and just have a good time.”

Every Week in Argenta 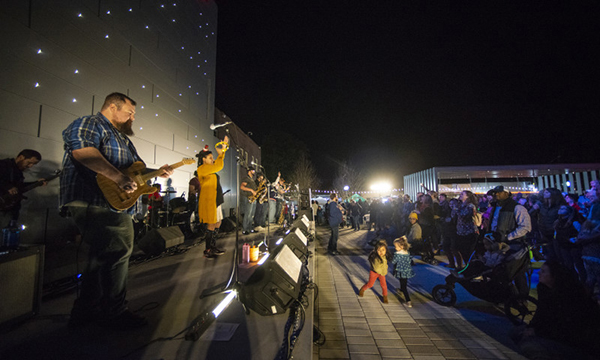 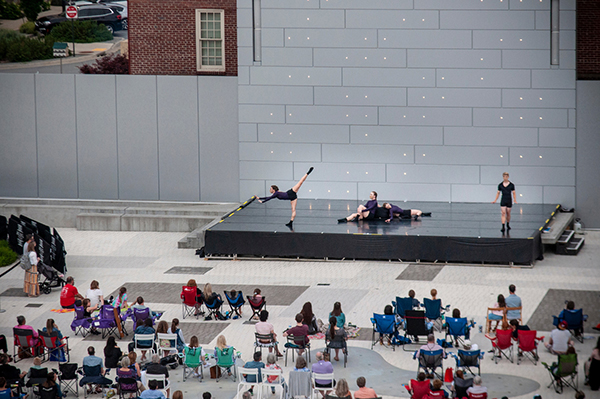 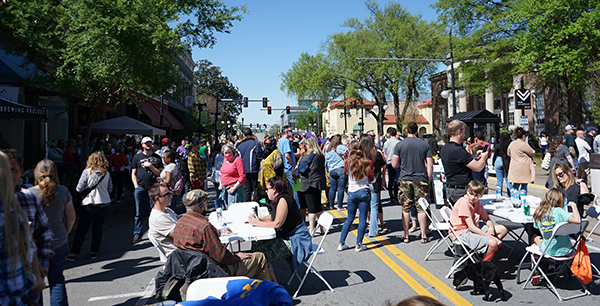 August 8: The Greatest Hits of Foreigner at Simmons Bank Arena.