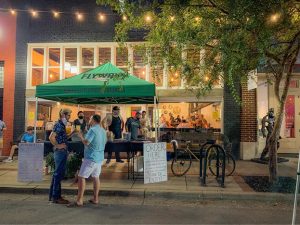 The news keeps getting better and better for Argenta. Look around and you will see a real resurgence in the district just north of the Arkansas River. In fact, the Argenta Downtown Council (ADC) and the City of North Little Rock just announced the next phase of the Argenta Outdoor Dining District by closing Main Street for outdoor dining from 4th Street to 5th Street (Fridays 6 p.m. until Saturdays at 10 p.m). The test run was this past Friday and Saturday, and now things are ready to go full throttle this upcoming weekend.

“The main purpose of closing the street is to give our downtown restaurants more space to socially distance customers,” says Chris Kent, ADC Executive Director. “We are working hard to create safe spaces for people to gather and enjoy all that Argenta has to offer.” 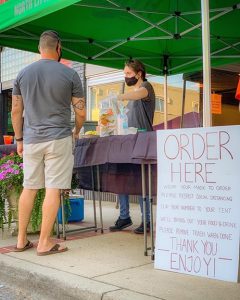 This all came about after city officials stepped up in response to the pandemic as a way to help area businesses. Time was of the essence, so things moved fast. The North Little Rock City Council unanimously approved an ordinance on June 8, 2020, to establish the Argenta Outdoor Dining District. The Argenta Downtown Council, City of North Little Rock and the North Little Rock Convention & Visitors Bureau worked together to get the ordinance passed. Outdoor dining–with tables, tents, chairs provided–has allowed restaurants and bars to socially distance more customers.

District rules are posted, so be sure mask up, practice social distance, and enjoy the sights and sounds of Argenta. Please make sure to claim a table only after placing an order at the participating restaurants. 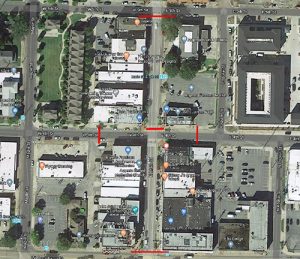 The next phase of the Argenta Outdoor Dining District will go into effect Saturday, August 15, with the closing of Main Street from Broadway to 4th Street on Saturdays from 3 p.m. to 10 p.m. 4th Street from Blake’s Furniture to Argenta Drug Store will also be closed to traffic during this time.