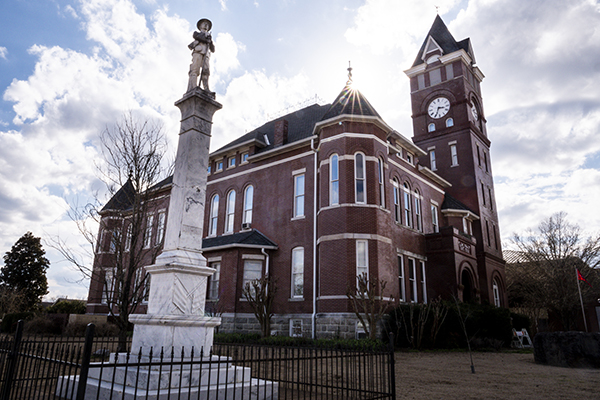 This month we’ll visit Arkadelphia, the county seat of Clark County and the hometown of some 11,000 residents. Perched on a bluff overlooking the Ouachita River in southwestern Arkansas and originally known as Blakeleytown, the community was founded in 1808, becoming Arkadelphia in the late 1830s.

As for the name itself, no one knows for sure where it came from, although there are a couple of theories. One has it that several of the local leaders wanted something sounding a bit more distinguished than Blakeleytown and selected Arcadelphia (from the Greek words meaning “an arc of brotherly love”), later changed to Arkadelphia. Another holds that many of the initial settlers hailed from northern Alabama and simply renamed the town after Arkadelphia, Alabama, a small community about 30 miles north of Birmingham.

Efforts to incorporate the city began in 1846, a process that was finally completed on January 6, 1857. By the time of the 1860 census, Arkadelphia was Arkansas’ seventh largest municipality. Escaping most of the ravages of the Civil War, the town hit a growth spurt in 1873 following completion of the Cairo and Fulton railroad link connecting Arkadelphia with Little Rock. A network of short-line spurs soon worked its way into the vast pine forests, and load after load of lumber was cut and exported. 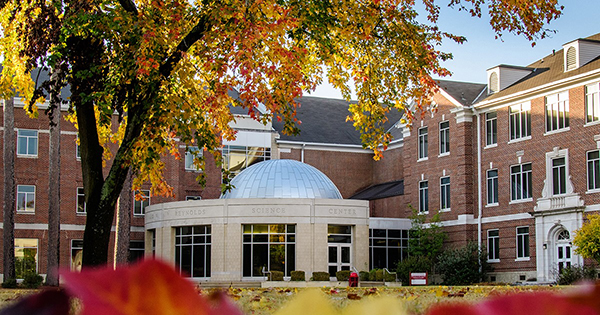 But Arkadelphia became more than a prosperous economic hub, quickly evolving into one of Arkansas’ leading centers for learning. In fact, Arkadelphia has played an essential, though largely unrecognized role in the development of higher education in the state. Five colleges were established in the community during the 1885-1895 decade. Two of them — Henderson State University and Ouachita Baptist University — remain in operation while two others — Shorter College and Draughon’s Business College — eventually relocated to Pulaski County. 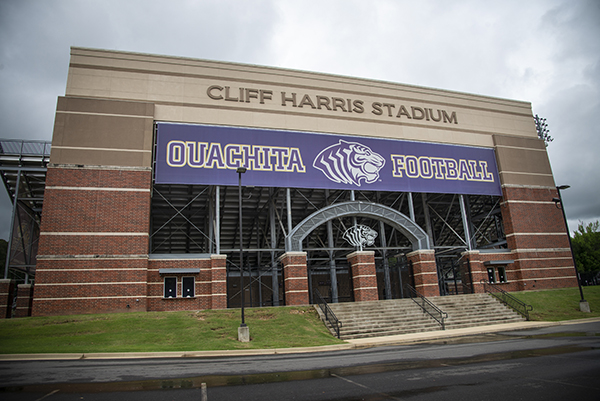 Founded in 1890, Henderson State University was first called Arkadelphia Methodist University. In 1904 it was renamed to honor the financial support provided by Charles Christopher Henderson, a prominent business leader with ties to the livestock, lumber, railroad and banking industries. His former home, known as the Captain Henderson House, now serves as a handsome bed and breakfast. This ornate example of Neoclassical architecture features eight guest rooms, priced from $90 to $120 per night. 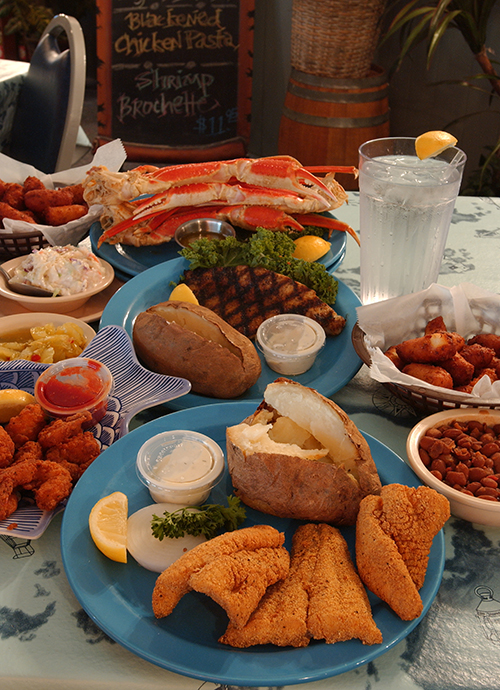 Following a period of financial difficulties, Henderson recently became a part of the Arkansas State University (ASU) organization. Dr. Charles Welch, president of the ASU system, feels good about this new affiliation. “Henderson University is back on stable footing, and while we still have much to do, we are excited about our collective futures and look forward to further developing Arkansas’ second-oldest public university,” Welch says.

Dating from 1886 and nicely situated on 160 acres, Ouachita Baptist University (OBU) is literally across the street from Henderson. As one might expect, the two schools have developed a heated sports rivalry, particularly when it comes to football. Rex Nelson, senior editor and columnist for the Arkansas Democrat-Gazette and himself an OBU graduate (and long-time broadcast announcer), has attended this gridiron grudge match for years and offers his insights: “I’m biased, but I think the annual Battle of the Ravine football game between Ouachita and Henderson is Arkansas’ most notable annual event. Think about it. This is the only game in all of college football where the visiting team doesn’t fly or bus to a road game. The visitors walk across Highway 67 to play and then walk back to their own dressing room after the game.”

Nelson points out that in 2018, Sports Illustrated published an eight-page spread on this yearly conflict, “giving it the kind of national attention that it has long deserved.”

OBU has nearly 2,000 undergraduates attending classes among its 64 degree programs in eight academic schools. Like Henderson, Ouachita has a long list of accomplished alumni to include Cliff Harris (pro football Hall of Fame), Travis Jackson (pro baseball Hall of Fame), and a slew of prominent political leaders, chief among them former Gov. Mike Huckabee. Huckabee fondly recalls his days as a collegian: “Janet and I were students at OBU and lived in one side of a duplex not far from campus. We will always cherish our time first as married students living on campus and then as a married couple struggling to get through school. I worked 40 hours a week at the local radio station to pay for my education.”

Although he hasn’t lived there in years, Nelson remains a big fan of Arkadelphia. “I honestly cannot imagine a better place to grow up than Arkadelphia. It has always had the advantages of a small town with a lack of traffic, low crime rate and a low cost of living. But, because it’s a college town, there are amenities that normally one would get to take advantage of only by living in a much larger city. Growing up, I attended college sports events, concerts by well-known groups and lectures by famous speakers on a weekly basis. These are the kinds of things not normally associated with a town of 10,000 people.”

Renowned educator and Arkadelphia native Dr. Fitz Hill is another strong advocate for the city. “I have so many fond memories of walking with my friends to athletic contests on the college campuses of Ouachita and Henderson and always feeling safe while waking home at night after the games,” he says. “Arkadelphia is known as ‘a great place to call home’ for valid reasons, and I am so proud that I can say that I was born and raised there.” 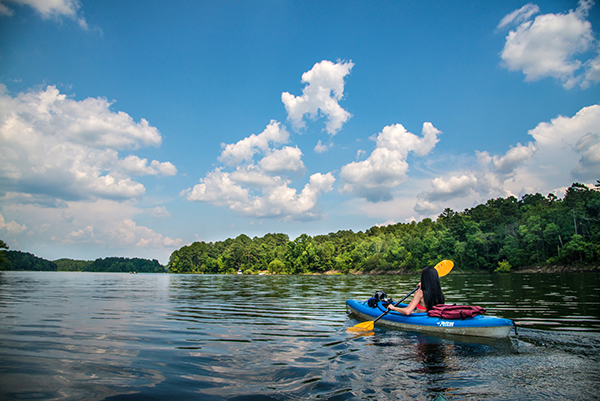 Arkadelphia has a parks system above and beyond what might be expected in a community its size — and it’s getting better, thanks to a 1 cent sales tax increase approved by voters about a year and a half ago. Recreation facilities across the city have been upgraded, more than 20 new features will be added to the aquatic park, and programs have been expanded for youth basketball, volleyball and softball, youth cheerleading, and adult softball. Junior Rodemeyer, parks and recreation director, sums it up nicely: “Our department is entering a really exciting time. We are continually adding new programs and events, increasing participation, and providing a better-quality service to our community and patrons.” 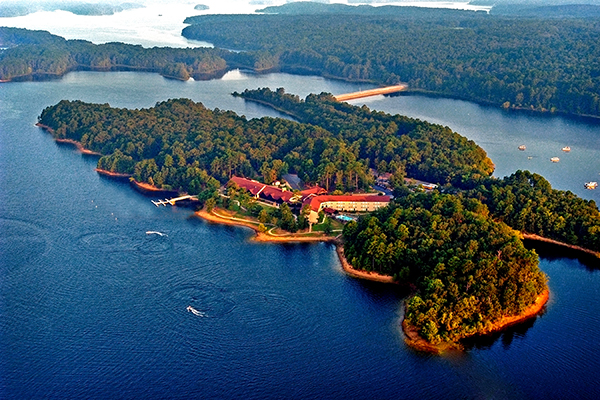 Not to be overlooked is DeGray Lake Resort State Park, just 8 miles north of town. This recreational oasis includes an 18-hole golf course, 96-room lodge and restaurant, marina, trails and campgrounds. Across the lake from the state park is one of Arkansas’ top-ranked mountain bike trails, the 16-mile-long Iron Mountain Trail. State Park superintendent Walt Reding provides an apt summary: “The availability of these many recreational activities within such close proximity to Arkadelphia both improves the quality of life for the community as well as stimulates the local economy by creating a prime tourism destination.” 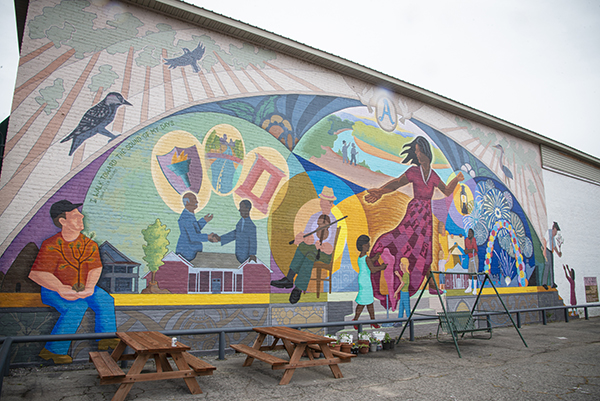 The Arkadelphia Mural on Main Street.

Arkadelphia’s historic downtown commercial district, added to the National Register of Historic places a decade ago, is getting more and more attention from tourists. Kris Gravett, owner of Hairapy hair salon, is president of the Arkadelphia Downtown Network and is proud of its involvement with the Main Street program. Recent beautification projects have included awnings, banners, plantings and murals. The “Late to 8” program encourages customers to visit a number of downtown shops which are open until 8 p.m. every Thursday evening. Gravett notes the success of several downtown eateries, to include Slim & Shorty’s, the 67 Grill, JavaPrimo Coffeehouse, and Samantha’s Sweets. 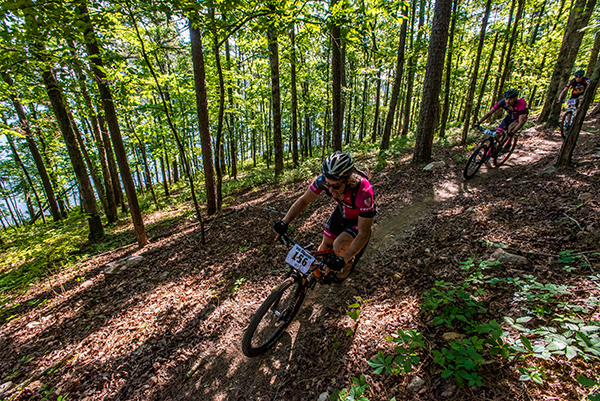 But dining options in Arkadelphia aren’t limited to downtown. Others located outside the central business district include: Allen’s BBQ Company, Fat Boys Fine Food & Catering and Hamburger Barn. The Clark County Farmers’ Market opens this spring with vendors operating on Wednesdays and Saturdays (7 a.m. to noon). It can be found on North 10th Street, across from the Henderson State University campus.

City Manager Gary Brinkley, now serving in his fourth year, says that visitors are often surprised to find that Arkadelphia occupies the foothills of the Ouachita Mountains. Coming from west Texas, Brinkley has developed a deep appreciation for the lushness of the local landscapes. “There’s so much water here,” he says, “and everything is so green.” When asked to provide a one-sentence summary of his town, he has a ready answer: “Great people in a beautiful location.”

We’ll close with something Nelson shared: “One of my friends likes to describe Arkadelphia as a cosmopolitan Mayberry.” .