Arkansas Artists You Need To Know 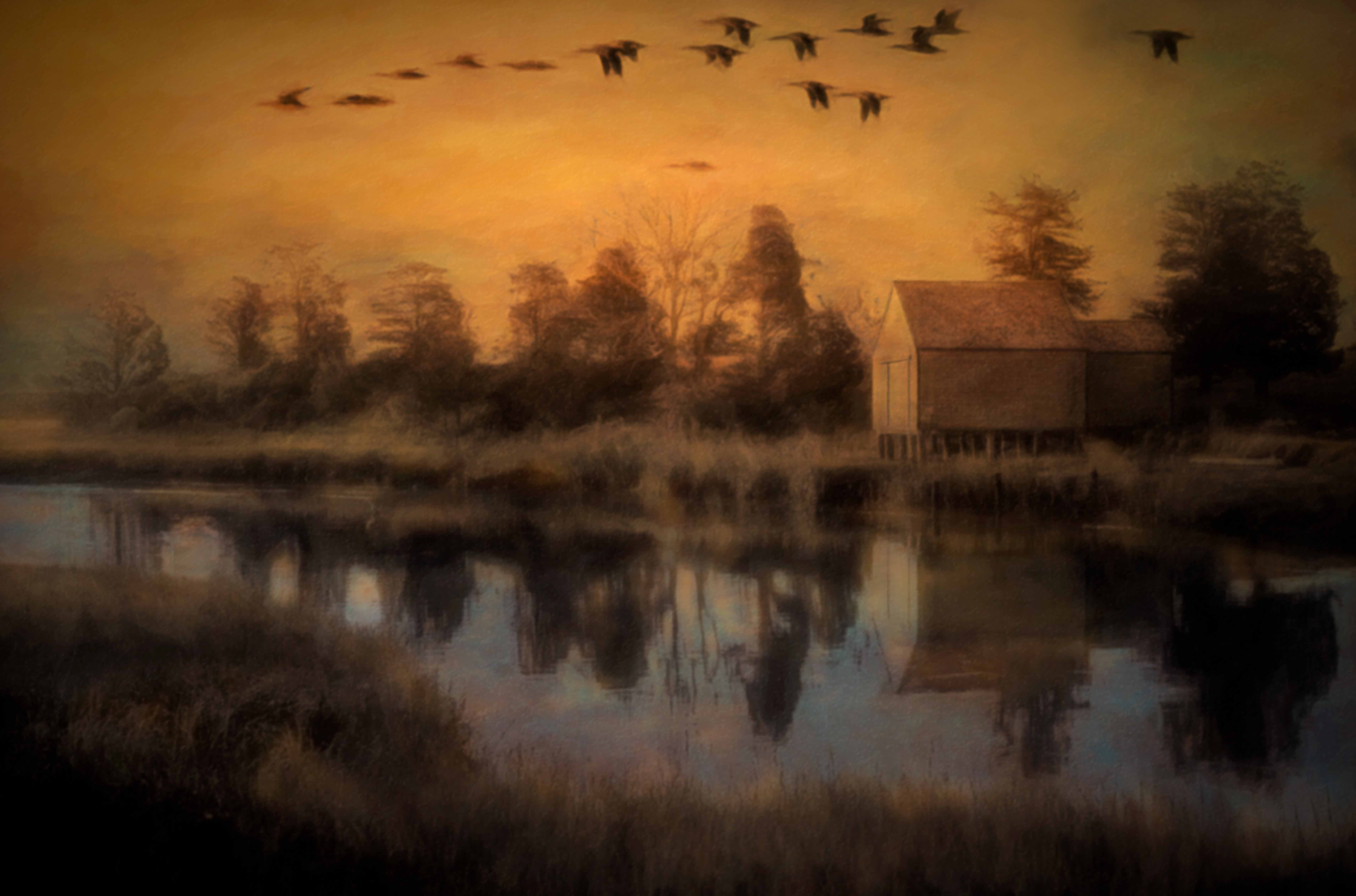 By Kody Ford
Arkansas has never lacked for creative individuals. But in recent years, the public has begun to pay more attention. Foundations are donating to expand art departments at state universities. Art lovers can browse world-class collections and exhibits at places like the Arkansas Arts Center and Crystal Bridges Museum of American Art. The state has a variety of incredible visual artists residing here. The following artists are five you need to know. 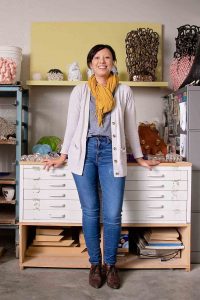 Linda Lopez – Fayetteville
Fayetteville-based ceramic artist Linda Lopez grew up in a family with a creative streak. Her mother had a side business making cakes, and her father spent his spare time welding scrap metal into birds. While she watched them, she never thought of art as a career until her junior year of college when she took sculpture, printmaking and hand building. The ceramics course was the hardest for her to grasp technically and conceptually, but she became hooked on the challenge.
Her unique style developed during graduate school when a sculpture professor gave her some hard advice that she should do work that felt true to herself. She created her first dust furry out of latex glove fingers filled with plaster and dipped individually in latex house paint, which was then pinned to a foam form.
These days, Lopez’s dust furries have gained national attention, and she’s had her work featured in shows across the United States. She works as a professor at the University of Arkansas and even received an Artist 360 grant for her work. She has shows coming up in Miami, Brooklyn and Denver in the next year. Her work can also be seen for the next month at Lacuna Furniture in Fayetteville. She is represented by the Mindy Solomon Gallery in Miami.
Instagram: @linda__lopez 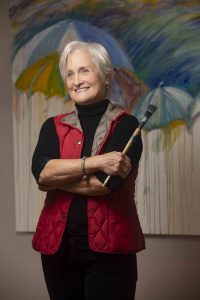 Tansil Stough – Hot Springs
Growing up in Hot Springs, Tansill Stough took every advantage oﬀered to learn about art and design.
“I remember as a kid drawing in the prayer books at my church, St. John’s Catholic,” she says. “I carried my coloring books, notepads and crayons whenever I went somewhere. If I had to go to my dad’s office to wait for him, I’d be coloring. Five years ago, I painted ‘Little Boots’ from a photograph of me when I was four years old. I’m wearing a red dress and cowgirl boots — and holding my coloring books and a paintbrush. Even at that young age, I always had my art gear with me.”
It was while attending Southern Methodist University in Dallas that she realized it was her calling. Wanting more experience culturally and creatively, she attended The Instituto de San Miguel de Allende in Mexico, and The American College of Design in Lucerne, Switzerland. She completed her Bachelor of Arts with an emphasis in drawing in 1980. While studying in Mexico under Margaret Dawitt, she learned how to be more versatile and fluid in her work.
“I’ve seen her jump from abstract to realism in her work and thought how much fun that would be,” Stough says. “[Dawitt] taught me ‘feelings can be expressed in color, including black and white, and with or without form.’ Most of her work has form, but if you look beyond that, you’ll see the feelings. For me, that is my goal.” 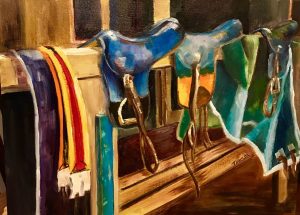 For a decade, Tansill was a partner in the architecture firm ADA, Inc., in Little Rock. She began painting after the firm closed in 2001, taking private and group lessons after returning to San Miguel de Allende. Some of her career highlights include having a painting of John F. Kennedy on display at The Sixth Floor Museum at Dealey Plaza, in Dallas. She also painted a portrait of the famous photograph of JFK meeting a young Bill Clinton at Arkansas Boys State. This piece even hung at the Clinton House Museum in Fayetteville in 2016.
“My Clinton/Kennedy painting was a spin-off from my Kennedy paintings,” she says. “When I saw them meeting at Boys State, I could see the spark of interest in Bill’s eyes and face. To me, they connected at that point, and JFK was Bill’s inspiration. It is in no way a political statement. Right or wrong, it is a statement about what I sensed as an artist. By the way, ‘The Spark,’ is the title of that painting.”
Visit: facebook.com /tansillart 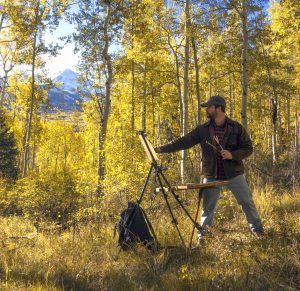 Trey McCarley – Little Rock
Trey McCarley paints vibrant and bold plein-air landscapes. His style stems from an intensive full-time apprenticeship under the renowned American Impressionist Robert Moore after he completed his landscape architecture degree at the University of Arkansas-Fayetteville. Although his training took place then, McCarley feels he had been training for a long time. “I believe an artist is an artist from birth, by way of thinking,” he says. However, it becomes a vocation “through passion, calculated risk, and massive amounts of dedication.”
Foundationally, his style is rooted in Russian Impressionism but is now taking on a more contemporary application of the paint with realistic color schemes. He says, “Not once have I created the same painting twice, and this leaves my style, to be honest, intentional, yet raw and impulsive. It is hard to lie with a paintbrush.”
In September 2017, he was named as one of Southwest Art Magazine’s Top 21 Under 31 Young Artists to Collect. While he is gaining more success, he hasn’t become jaded yet. So what excites him as an artist? 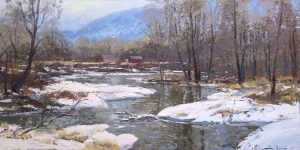 Morning in the Bitterroot

“The challenge of conveying human emotion and our connection to the landscape and the goal of using abstraction to render reality,” he says. “Up close the painting is bold and unapologetic; then as you step away, it comes together to form the truth. It is difficult enough to define something, but to communicate without words is art.”
Visit: treymccarleyart.com 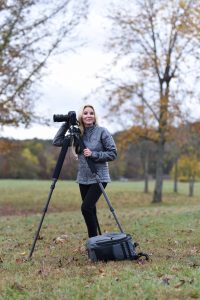 Linda Harding – Little Rock
Photography found Linda Harding by accident. While attending college, her roommate was enrolled in a photography class, and Harding always drove her to scout locations for assignments. It didn’t take long for Harding to fall in love with a camera and a landscape. Since then, she’s never ventured far from a camera or darkroom.
Today, she creates surrealistic works with desaturated values that could almost be a painting. Each piece is sprinkled with hints of magic and darkness.
“I love to use layers of textures to give depth, and to create a dream-like quality to make viewers feel as if they are getting a glimpse of a mythological world,” she says. “I love exploring outside of daily reality to reach for something deeper in our mind and soul.”
Harding finds inspiration in light, imagery, colors, shapes, form and even travel. Her creative process is from camera to computer. She also leans upon Photoshop and plug-ins to get that image on paper the way she feels it.
“At times, I will take forever editing, making the image fit my feelings,” Harding says. “I am learning new shooting and workflow techniques, so I have been practicing and finding myself more as I grow in my art.” 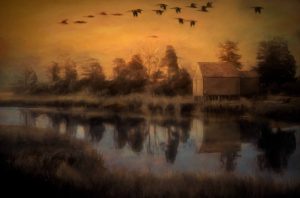 Some of the recent highlights of her career include having a gallery show in New York and showing at Martha Stewart’s Food and Wine Festival. But there was one cherry on top of that: “Having Martha Stewart owning one of my pieces of art to hang in her offices is pretty big for me!”
Visit: lindahardingphotography.com 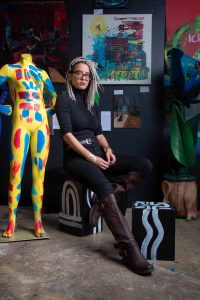 Joëlle Storet – Fayetteville
Joëlle Storet is one of the hottest artists in Northwest Arkansas. While she has been painting since childhood, her career has taken off over the last few years. From illustrating for companies like Fayettechill to serving as gallery manager of Art Ventures NWA, she’s an incredible artist to watch.
She cites cartoonist Herge (The Adventures of Tintin) and Renaissance painter Hieronymous Bosch, both Belgian natives, as influences. She loves Dutch and Flemish genre paintings due to the excessive details, impressive features, eery lighting and satirical portrayals of society. Her Afro-punk style also draws upon her Congolese and Belgian roots. 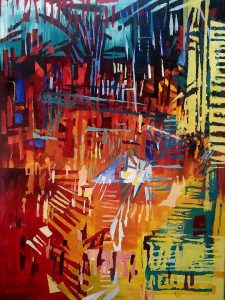 “I was born and raised in Europe until I was 12,” she says. “Despite being half-African from my mother’s side, I spent very little time in Zaire. The culturally-ingrained experiences I had amassed over time were constructed by my mother’s presence through language, comic books and film. Belgium, being one of the former colonial powers, has one of the largest collections of authentic central African art in the world at the Royal Museum of Tervuren. I was never able to see in such detail again either in Europe or America.”
Her work has been showcased in Northwest Arkansas and across the world, including in Austria and Germany. Her experiences in recent years have humbled and stimulated her.
“Watching the arts in Northwest Arkansas flourish and collaborating with members in the community has inspired me to grow as an artist and patron,” she says. “Art defines a higher purpose, and I feel very lucky to meet artists from all walks of life.”
Instagram: @joelleelleoj