Even the most ardent fans may be surprised to learn that fully 45 percent of the major leaguers enshrined in the National Baseball Hall of Fame in Cooperstown played the game in Hot Springs on one occasion or another. There was a time when several big league teams were based in the Spa City. Temporarily, that is, as in spring training. In fact, a convincing argument can be made that Hot Springs is the home of modern spring training.
Here’s how it happened. About the time major league baseball celebrated its 10th anniversary, the president of the Chicago White Stockings (forerunners of the Chicago Cubs) decided to send his team south to Hot Springs in advance of the 1886 season. His theory was that climbing the local mountains and soaking away their toxins and excess poundage in the thermal waters would give his players a leg up when the season’s competition began. Something worked because the White Stockings went on to win the pennant that year. 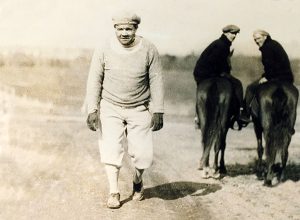 Baseball legend Babe Ruth trains for the upcoming season on the tracks at Oaklawn in Hot Springs. Photo courtesy of the Garland County Historical Society.

Quick to copy a good idea when they saw one, other managers followed suit. Weather was generally favorable in Hot Springs in late winter, access was convenient by railroad, local folks made the players feel welcome, and scrimmages and exhibition games could be easily arranged. During the next 50 years, other teams taking spring practice in Hot Springs included the Boston Red Sox, Brooklyn Dodgers (now based in Los Angeles), Cincinnati Reds, New York Highlanders (later to be known as the Yankees), Philadelphia Phillies, Pittsburgh Pirates, and St. Louis Browns (eventually to be called the Cardinals).
What’s truly amazing is the long list of players who did their pre-season training in Hot Springs: Ty Cobb, Dizzy Dean, Rogers Hornsby, Honus Wagner and Cy Young, among hundreds of others. One, a slugger by the name of Babe Ruth, belted a 573-foot home run that cleared the fence at Whittington Park, flew across Whittington Avenue, and landed in a pen at the Arkansas Alligator Farm.
By the 1920s, teams sought even warmer climes and most moved their spring training operations to Florida and Arizona, although some players maintained their pre-spring training regimens in Hot Springs. Ray Doan’s Baseball School continued to operate in the city through 1938 with an imposing list of instructors: Grover Alexander, Dizzy Dean, Rogers Hornsby, Schoolboy Rowe and Cy Young.
Baseball has remained an important part of Arkansas’ culture. Residents of northeast Arkansas have followed the rise and fall of St. Louis Cardinals for generations. My father hails from that corner of the state and he and his family regularly listened to the Redbirds on the radio during the season. Annual pilgrimages to St. Louis to watch Dizzy Dean, Pepper Martin and their teammates before the fall harvest were welcome rewards after hot summers in the sun-baked cotton fields.
Arkansas has certainly produced its share of major league stars over the years. The list of heroes includes Lou Brock, Bill Dickey, Torii Hunter, George Kell, Don Kessinger, Cliff Lee, Wally Moon, Brooks Robinson, Schoolboy Rowe, Johnny Sain, Lon Warneke and, of course, the inimitable Dizzy Dean. Maybe it’s because of Arkansas’ small size, but many of our citizens have enjoyed personal relationships with players hailing from the state. My mother grew up in Fayetteville virtually next door to Sherm Lollar, a seven-time American League All-Star catcher who spent most of his career with the Chicago White Sox. Such connections are not uncommon. Countless households across Arkansas possess autographed baseballs and photographs, commemorative pennants and programs, and similar prizes representing America’s pastime.
Students of the game will be pleased to know Hot Springs has placed 26 cast aluminum plaques across the city to recognize its unique baseball heritage. There’s no admission charge and viewing is available year-round. As for the Arkansas Alligator Farm, it’s still in operation on Whittington Avenue . . .