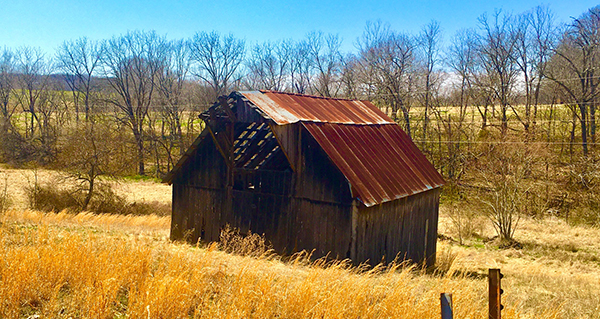 In 1900, Arkansas’ population of horses and mules stood at approximately 500,000, most of which were used to plow land each spring for the next crop. Fifty years later, following the mechanization of agriculture, the number had plummeted to 80,000 – a level more or less maintained today. While nobody will argue that horses and mules are endangered species in this state, they certainly aren’t as common as they were a century ago.

One doesn’t have to be a mathematician to realize the demand for barns has also dramatically declined in recent decades. Those that have survived now face additional challenges: termites, tornadoes and timber-salvagers. The end result is that wooden barns are quickly disappearing from the landscape, with the repurposing of barn wood for picture frames, shelving, cabinets, tables and even headboards a major factor. In one of the more interesting examples of recycling, a funeral home in Saline County offers a $3,895 casket made of rough barn wood, complete with original knots and nail holes.

When it comes to barns, I’m an unrepentant sentimentalist. I remember the fun of gathering eggs in my grandparents’ barn, a couple of miles north of Corning, as a kid. Climbing up into its hayloft, I looked out over the chicken yard and the rest of the farm. The distinctive earthy smell that permeated the building and the sound of raindrops drumming against the tin roof remain in my mind decades after the fact. Back in those halcyon days, barns provided me with special places for adventure and exploration.

I also fondly recall taking shelter in an abandoned barn during a late summer canoe trip on north Arkansas’ Buffalo River. With threatening thunderheads bearing down on us, my paddling buddies and I left our canoes on shore and quickly hauled food and other gear to the barn, beating a torrential rain by seconds. With clatter from huge raindrops making conversation impossible, we gathered just inside the barn doors and watched Mother Nature’s furious assault. After the storm passed, a friend sat in the straw and played his guitar while wisps of fog floated up the hillsides. It was a barn experience I’ll never forget.

Years later, the remaining structures still hold a strong fascination, but my relationship with barns has changed. Rather than clambering through them like Indiana Jones on a mission, I’m on the outside with my camera, struggling to find something close to a perfect composition. I figure it must be genetic, given my mother’s ability to capture the stories of aging barns with her watercolors.

Driving the rural highways of the state is the best way to discover these classic relics. The old traditional wooden barns have pretty much vanished in eastern Arkansas, although some can still be found along Crowley’s Ridge. In south Arkansas, for the most part, they’ve been replaced by decidedly unaesthetic metal pole barns. My advice is to check out the back roads in the Ozarks, especially on crisp fall days when Mother Nature might enhance your photographs with a touch of brilliant foliage.

As for my grandparents’ barn in Clay County, progress caught up with it years ago. A soybean field now occupies the site where that venerable structure once sat. To the best of my knowledge, not a single photograph of it exists in our family archives, although my mind still retains a hazy but comforting image.

The state is home to about half a million kids these days. My guess is that maybe 1% – and certainly less than 5% – will ever have a chance to let their imaginations soar as they explore the horse stalls, haylofts, chicken coops and corn cribs of a vintage Arkansas barn. And that’s a shame.