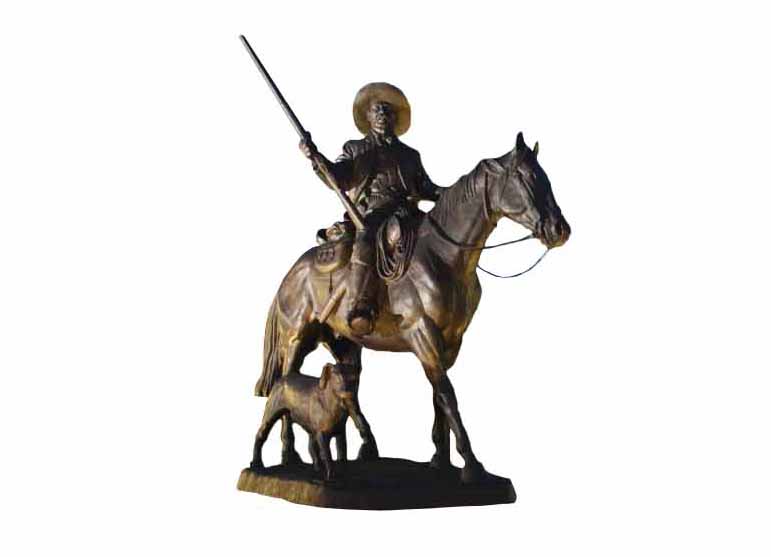 Like tens of thousands of children from my generation, I spent hours in front of the television – black and white in those days – captivated by the adventures of The Lone Ranger. I never imagined the famous Masked Man character might have been based an actual lawman from Arkansas – and an African-American at that. But several experts are now suggesting that very possibility.
The lawman was Deputy U.S. Marshal Bass Reeves, a former slave born in Crawford County near Van Buren in 1838. During the Civil War, Reeves fled into Indian Territory where he picked up several tribal languages and learned to track. Hired in 1875 by newly-appointed Federal Judge Isaac Parker for those skills and his familiarity with the Indian Territory, Reeves started out assisting other deputies as they sought to bring law and order to the rough-and-tumble Western District. This federal court district, based in Fort Smith, included western Arkansas and the Indian Territory and was the largest in U.S. history, covering a total of 74,000 square miles.
Establishing frontier justice was a dangerous and challenging task. In fact, the U.S. Attorney General claimed that of the 20,000 persons living in the Indian Territory, only 5,000 could be considered upright, law-abiding citizens. With ne’er-do-wells (or worse) making up three-fourths of the population, it’s no wonder that more than 120 deputy U. S. marshals were killed in this vast unruly region.
Standing 6 feet 2 inches tall and weighing 200 pounds, or about 6 inches taller and 55 pounds heavier than the average man of the era, Bass Reeves was physically imposing – with extraordinary strength. That probably had something to do with his record of arresting over 3,000 felons – and shooting and killing another 14 in self-defense – during his 32 years as a federal marshal.
Consistent with The Lone Ranger television hero, Reeves was a superb horseman and rode a big, magnificent stallion, although his mount was gray rather than white. Reeves was such a crack shot with either hand that organizers of shooting contests refused to allow him to participate. He was a master at disguise, another trait shared with The Lone Ranger. Although Reeves didn’t leave silver bullets as his calling card, he was known to hand out silver dollars in a similar fashion. Reeves’ reputation as an honest and uncompromising public servant was reinforced when he arrested his own son for murder. And finally, Reeves was often accompanied by an Indian posseman much like Tonto riding beside The Lone Ranger.
Several famous lawmen were contemporaries of Bass Reeves – well-known heroes such as Roy Bean, Wyatt Earp, Pat Garrett, Wild Bill Hickok and Bat Masterson. Their legendary exploits have been recounted in dozens of books along with a long list of movies and television shows. Meanwhile, except for a fine statue in downtown Fort Smith, Reeves and his remarkable career have been largely ignored. That’s unfortunate because, Lone Ranger or not, some learned historians now claim Deputy U.S. Marshal Bass Reeves was the best in the business.

Joe David Rice, former tourism director of Arkansas Parks and Tourism, has written Arkansas Backstories, a delightful book of short stories from A through Z that introduces readers to the state’s lesser-known aspects. Rice’s goal is to help readers acknowledge that Arkansas is a unique and fascinating combination of land and people – one to be proud of and one certainly worth sharing.
Each month, AY shares one of the 165 distinctive essays. We hope these stories will give you a new appreciation for this geographically compact but delightfully complex place we call home. These Arkansas Backstories columns appear courtesy of the Butler Center for Arkansas Studies at the Central Arkansas Library System. The essays will be collected and published by Butler Center Books in a two-volume set, the first of which is now available to purchase at Amazon and the University of Arkansas Press.