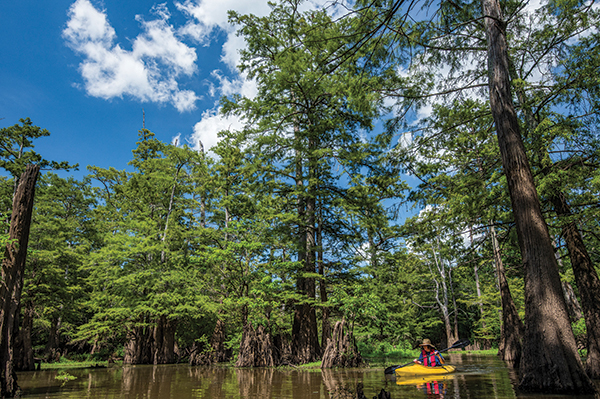 Like most people, Arkansans are not above boasting a little now and then. The biggest, oldest, tallest, fastest sort of thing. One of our bragging points is Bayou Bartholomew, the world’s longest bayou.

Originating in pine forests west of Pine Bluff, the bayou meanders in a southerly direction for 359 miles, adding tributaries as it goes, and eventually flows into north-central Louisiana where it merges with the Ouachita River. Along the way, it drains nearly 950,000 acres of southeast Arkansas countryside. Hydrologists speculate that Bayou Bartholomew occupies a streambed left by the Arkansas River when it changed course about 2,000 years ago.

Native Americans lived along Bayou Bartholomew for centuries and often constructed mounds near the water. Much of the original research on these archaeological sites occurred in the early 1880s when the Smithsonian Institution received funding from congress to form a Mound Exploration Division. An excerpt from the Dec. 5, 1882, issue of the Arkansas Gazette reported:

Mr. Edwin Palmer, of the Smithsonian Institute, returned from Drew County Saturday. Near Tillar Station he uncovered a small mound, situated on Bayou Bartholomew, and exhumed seventy skeletons and about sixty vessels, of all shapes and sizes, such as were used by the mound-builders. They seem to have all been buried at once, and without any system or design, as they were found in one confused heap. The skeletons and pottery, together with numerous sketches of this and other mounds in the vicinity, made by H. J. Lewis, have been forwarded to Washington.

Those mounds that weren’t destroyed by the Mound Survey fell prey to amateur relic hunters, construction projects, or agricultural land-leveling. Even so, Native American artifacts are occasionally discovered along the banks of Bayou Bartholomew.

Until fairly recent times, Bayou Bartholomew was a clear stream, often the site where rural church congregations performed baptisms. The waterway even provided a valuable yet challenging corridor for steamboats up to and through the Civil War. Although competition from railroads eliminated commercial boat traffic and urbanization and agricultural practices have degraded and polluted the watershed, it’s still an important part of southeast Arkansas’ culture.

For one thing, Bayou Bartholomew remains a haven for wildlife, with more than 100 fish species found in its waters giving it, according to some experts, the most diverse collection of freshwater fish of any stream on the continent. Locals claim it’s one of Arkansas’s undiscovered angling hotspots. Likewise, for decades hunters have pursued a wide variety of game in the rich bottomland hardwoods adjacent to the stream.

But there’s more. Biologists have found 35 varieties of mussels in the basin and birdwatchers are also fond of the bayou. Alligators inhabit its waters, and Spanish moss dangles from overhanging trees along its southern reaches.

For a quick and easy introduction to Bayou Bartholomew, check out Byrd Lake, a 144-acre natural area located within the city limits of Pine Bluff. The easy, half-mile trail is wheelchair-friendly.

For years now, I’ve driven through the Bayou Bartholomew country. I’ve crossed almost every bridge spanning the stream, and I’ve taken many photographs of the ancient and majestic cypress trees towering over the waters. But I’ve yet to experience the bayou from a boat — which is the only way one can get truly acquainted with this special waterway. It’s on my bucket list.