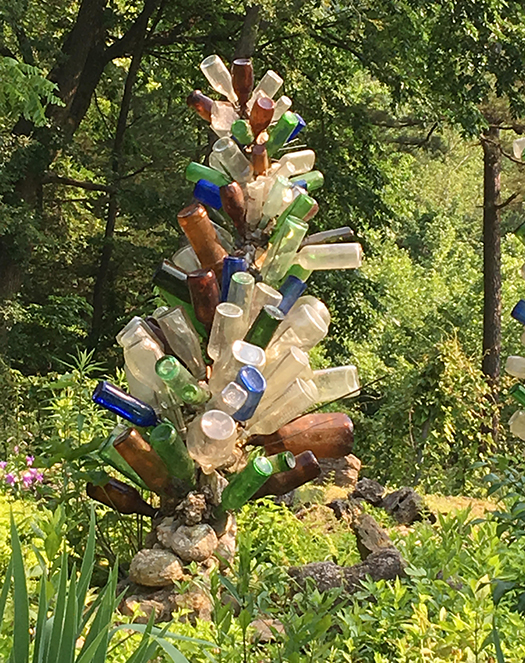 Although I knew nothing about the origin or history of bottle trees, I suspected they were birthed in the South. For those unfamiliar with this strange and colorful cultural phenomenon, here’s what they are: fairly short trees (or reasonable facsimiles) stripped of their leaves and twigs with wine bottles or other bright glass vessels slipped over the remaining branches (necks facing the tree trunks). Crepe myrtles and cedar trees seem to be favorite species among veteran bottle tree enthusiasts.

A little research confirmed that bottle trees are indeed a strong Southern tradition, but their history predates Arkansas and even the United States. While some claim the custom of bottle trees can be traced back a thousand years ago to Africa, evidence suggests even earlier ties to ancient communities along the northern Mediterranean. In any event, slaves brought the practice to North America more than 200 years ago, and many contemporary gardeners have eagerly carried it forward.

Unlike today’s practitioners, 19th century American slaves didn’t construct bottle trees to express their creative tendencies. To them the trees accomplished a far different and far more important objective: fending off evil spirits. These dreaded apparitions, or “haints” as they were sometimes called, would be lured into the bottles overnight and trapped – to be destroyed by the bright morning sunlight. When the wind blows just right past a bottle tree, the whistling sounds are said to be moans of the captured spirits.

Bottle trees are scattered all over Arkansas, but the single best collection is at Quigley’s Castle in Eureka Springs where more than a dozen examples can be found. And, yes, I have a pair of bottle trees at my residence in Little Rock. So far they appear to be doing their part in keeping evil spirits at bay.

They’re both fun and easy to make. Perhaps the best part is picking out a deep-colored selection at the local package store and enjoying its delectable contents before adding the empty container to your tree. Cobalt blue bottles are said to be particularly effective in haint eradication.