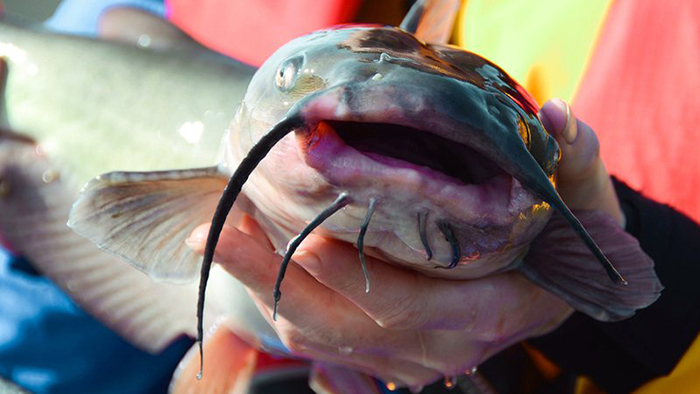 By virtue of my genetic background, I’m somewhat of an authority on catfish. It’s a stretch, but here’s the deal: On March 27, 1963, my maternal grandfather — Elmer Powers — reeled in an 18-pound channel catfish from Lake Fayetteville. His catch, with a minnow as bait, established an Arkansas state record which remained on the books until an 11-year-old boy from Camden landed a 19-pound, 12-ounce fish a little over 15 years later. The south Arkansas lad caught his monster in the family’s farm pond using a catalpa worm (more about that later).

I wasn’t with him on that spring day in 1963, but I spent many hours fishing with Papa Powers over the years and picked up several valuable tips. His first rule was absolute quiet in the boat. If you had to talk, make it short and make it a whisper, and you certainly didn’t clang a soda bottle against the gunnels or kick over the tackle box.

Running a close second was patience. We would sit for hours in the middle of the lake without a bite, but I was told more than once our luck could change at any second. Unfortunately, the concepts of patience and deferred gratification are generally foreign to sunburned and hungry adolescent boys.

Third was bait — and my grandfather staunchly maintained that natural bait worked best. We’d generally use earthworms or minnows or occasionally crawdads, but the preferred choice was the higahly-prized catalpa worms — which are not worms at all but caterpillars that feed on the broad, heart-shaped leaves of catalpa trees, sometimes completely stripping the branches of foliage. The caterpillars, usually about an inch and a half to two inches in length, are rather fearsome looking with a prominent black horn rising from the rear of their bodies. Their heads are black and their thick pale bodies are marked with dark spots and a black band down their backs. When my sisters and I would discover an infested tree in early to mid-summer, we’d grab the longest cane poles in sight and would then jostle the underside of the leaves where the catalpa worms were feeding. They’d tumble to the ground, and we’d collect them in a coffee can, carefully, to avoid that menacing but harmless horn. The worms didn’t much appreciate our interest and would often discharge a gross, sticky substance — which we called “tobacco” due to its similarity to that nasty stuff aimed into spittoons. These hand-gathered, free-ranging, organic worms unfailingly produced a good catch of catfish. The caterpillars not nabbed by humans or other predators eventually become sphinx moths — large, grayish-brown moths which typically fly at dusk or night and are not frequently seen.

My grandfather would not have been surprised that Arkansans are among the national leaders in consumption of catfish but would have been amazed to learn that catfish farming is now an “industry” in Arkansas. Located primarily in the state’s southeast corner, aquaculture operations raise their fish in networks of ten- to twenty-acre ponds. Fed high-protein pellets, the commercially-grown catfish are ready for harvest at 18 months when they’ve reached the 1.25- to 2-pound range.

As for cooking catfish, several options exist. The fish can be baked or broiled, and I even sampled some delicious smoked catfish pâté years ago in Memphis. But to truly savor one of the signature dishes of the South, the only real choice is cutting the fresh-caught catfish into fillets, coating them with a cornmeal/flour mixture and frying the fillets at 350 to 375 degrees until golden brown. Hushpuppies, of course, are the traditional side dish.

By the way, catfish have an undeserved reputation as exclusively bottom feeders which has caused some folks to avoid eating this delicacy. The fact is, they’re aggressive predators often feeding on perch and other small fish. My grandfather even found a small rabbit in the belly of one catfish he’d caught.

Also, the channel catfish isn’t the sole catfish found in Arkansas waters (although many with discerning palates maintain it’s the tastiest). Most fishermen are well aware of the flathead (or yellow) catfish and the blue catfish, both of which can get considerably larger than the channel. But Papa Powers was convinced the channel catfish was the best of the lot, and I’m certain he was absolutely right.

Each month, AY will share one of the 165 distinctive essays. We hope these stories will give you a new appreciation for this geographically compact but delightfully complex place we call home. These Arkansas Backstories columns appear courtesy of the Butler Center for Arkansas Studies at the Central Arkansas Library System. The essays have been collected and published by Butler Center Books in a two-volume set. Both are now available to purchase at Amazon and the University of Arkansas Press.