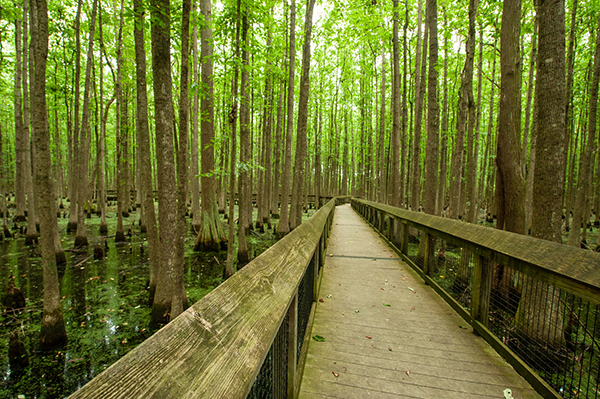 I’m still trying to figure out what it is about cypress trees that makes me so partial toward them. While I enjoy and appreciate other native species such as redbuds, dogwoods, maples and magnolias, it’s the bald cypress occupying the top spot on my tree list.

Their distinctive silhouettes as they lord over the surrounding vegetation are certainly part of it, especially when clumps of Spanish moss dangle from the branches. They can reach impressive heights indeed, with the state record bald cypress towering 120 feet above the Arkansas earth — or taller than a 10-story building. And their trunks can be massive. That state champion tree, located near Ethel in Arkansas County, has a circumference of 516 inches (or nearly 43 feet) at its base.

Their antiquity is another. The oldest ones in the state have been around for better than a thousand years, predating Leif Erikson, the Crusades and the Magna Carta, not to mention Christopher Columbus, Roanoke and the Mayflower. They’re easily the oldest living things in the Arkansas landscape.

I also appreciate their persistence. Cypress trees are chiefly found deep in the wetlands of the state, places where only a handful of other species are able to thrive. They’ve stood tall during historic droughts and record-breaking floods, surviving countless storms over the centuries.

Given the incredible durability of cypress lumber (bald cypress wood resists rot), it was a favorite for the early homesteaders in eastern and southern Arkansas. Not only that, cypress lumber has termite-defying properties: 1) The heartwood is dense, making it difficult for termites to penetrate and create colonies; 2) It contains a naturally occurring compound called cypressene, which termites find distasteful. In fact, studies have determined that mulch made of cypress heartwood is repellent and sometimes even toxic to termites.

First-time observers of cypress are often surprised to discover that the trees are conifers — and that they shed their foliage every year. The needles are greenish-yellow during the spring and summer months, then change to a reddish-brown in autumn before falling. In scientific jargon, the bald cypress belongs to the Cupressaceae family of trees and is related to the coastal redwoods and giant sequoias of the Pacific Northwest. Its ancestors can be traced back 190 million years in fossilized remains.

As for those curious “knees,” which often surround cypress trees, botanists have been debating their function for the past two centuries. These strange woody structures, usually appearing as elongated cones pointing upward, are an extension of a cypress tree’s root system. Scientists originally assumed the knees played a role in supplying oxygen to the tree, but that theory no longer holds any credence. While researchers still aren’t sure of their exact purpose, there’s no question that the knees — coupled with an extensive network of roots — are an important factor in anchoring trees upright during even the strongest winds.

When you’re ready to get up close and personal with some stellar examples of bald cypress, my recommendation is to visit Pinnacle Mountain State Park, just a few miles west of Little Rock. The paved Kingfisher Trail — short, flat and wheelchair-accessible – wanders along the Little Maumelle River and passes by a stand of enormous cypress trees, complete with an assortment of knees, which will take your breath away.

For those willing to put in a little more time and effort, check out the champion bald cypress via a 1.2-mile trail (one-way) in the White River National Wildlife Refuge. Please note the trail may be underwater during wet-weather months, and the mosquitoes can be a real annoyance during the spring and summer. October may be your best bet for a visit. Here are directions to the trail (which is open to the public from March 1 through Dec. 15): At St. Charles turn south on Arkansas 17 to Ethel. Turn left at the Ethel Store, and follow the paved road through several turns into the White River National Wildlife Refuge entrance, turning right towards the Burnt Lake campground. When you arrive at a “Y” intersection, turn left, passing over Essex Bayou, and travel for approximately one-half mile. Trailhead marked “Champion Tree” will be on your left. Hike the trail for roughly one mile. About 50 yards beyond the “Sugarberry” interpretive sign, turn left at the trail intersection, taking the smaller trail to Arkansas’ champion bald cypress. And don’t forget to bring your camera. Some of its knees are 7 feet tall! (Note: The kind folks at the Ethel Store will be pleased to give you detailed directions and might be talked into selling you a snack and some bottled water.)